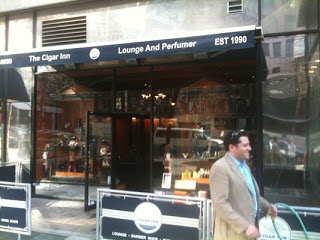 Cigar Inn, which in recently years has become one of the top cigar retail and lounge destinations in New York City has been sold to a subsidiary of Imperial Tobacco Group PLC. The announcement was made via an email communication and on social media.

The sale includes Cigar Inn’s two retail and lounge shops located at 1016 Second Avenue and 334 East 73rd Street in Manhattan.  The Second Avenue store had featured a Cigar Aficionado branded lounge.  After the announcement, Cigar Aficionado announced the association with Cigar Inn would be coming to an end.  This is because the publication has a policy that it cannot have a lounge in a store that is owned by a cigar company because it would be a conflict of interest.

“I am a long-time admirer of the stores that Gus, Billy and Bass Fakih have built at both Manhattan locations,” said Rob Norris, president of the Imperial Tobacco unit acquiring The Cigar Inn stores. “We want to stay true to the cigar heritage and tradition that the Fakih brothers have developed in their stores. We intend to maintain the relevancy that makes Cigar Inn the No. 1 place for NYC cigar enthusiasts to smoke hand-made cigars and hang out. “

“Despite the change in ownership, no substantial changes are currently planned for the stores,” added Norris. “We aim to focus on customer service and continue to develop the adult premium cigar community in these locations.”

“It’s easy to open a cigar store, but not easy to make it part of the community and the wider cigar industry,” Norris said. “In this respect, Cigar Inn has been incredibly successful. We’ll stay true to these values, continue with the Cigar Inn name and we’ll work to preserve and enhance the communal experience in the stores. We look forward to personally meeting Cigar Inn’s adult smokers and continuing the great work begun by Gus, Billy and Bass. They have promised to share their incredible knowledge to ensure their customer’s needs are met. That’s quite a legacy.”

In a press release that followed, it was revealed the subsidiary is East Side Tobacco.  It is worth nothing that Norris serves as CEO for JR Cigar, who is also owned by Imperial Tobacco Group PLC.

In a statement released by the previous owners, the Fakih family, “I have full confidence in the new ownerships vision for the future of the Cigar Inn. We have painstakingly built this business with passion and pride over many years, and we were very particular about who we selected to take this to the next level. We believe the new team is the right people to do this.”