The cigar that started it all for the Smoke Inn MicroBlend series is making a return. Today, the South Florida retailer announced the return of the Tatuaje Anarchy. The cigar was originally released in late 2010 as a part of Smoke Inn’s 15th anniversary. The cigar will once again be made at the My Father Cigar factory by the Garcia family. Pre-orders will begin on June 29th and the cigars are expected to ship on July 13th.

According to Smoke Inn, once the supplies of the one time run of the Tatuaje Anarchy were depleted, there was still demand for the cigar. However timing and availability of the tobaccos prevented another production run for being done. Last year, Smoke Inn approached Pete Johnson about doing another run of the cigar. Once Johnson and the Garcia family were convinced the cigar could be made, the wheels were put in motion for a return. The re-release of the Anarchy makes it the first MicroBlend release to be brought back. 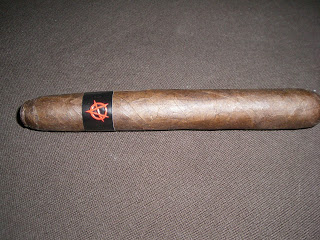 Tatuaje Anarchy 2010 Edition, the 2015 will have a similar shape but a different band

When the blend was first released, it consisted of an Ecuadorian Habano wrapper over a Nicaraguan binder and filler.

The Anarchy generated a sequel, the Tatuaje Apocalypse, released in 2012.  This featured a similar shaped cigar, but with a Connecticut Broadleaf wrapper.

In a press release, Pete Johnson owner of Tatuaje stated, “Demand for Tatuaje Anarchy over the years has stayed constant and strong. I am happy to finally reproduce that cigar for all my loyal supporters and fans of the Smoke Inn Tatuaje Anarchy project.”

The original Tatuaje Anarchy finished as the Cigar Coop #3 Cigar of the Year for 2011.

2015 is proving to be a busy year with shop exclusives by Tatuaje Cigars. This April the Tatuaje Exclusive Series Drinking Age was released to Anthony Cigar Emporium in Arizona. This was followed up last month by the release of the Tatuaje The Rumbo to Club Humidor in San Antonio, Texas. New York / Pennsylvania retailer Nice Ash Cigars announced they will be receiving Tatuaje The W as its shop exclusive in August. There are also plans to bring back the Tatuaje M80 to Two Guys Smoke Shop in New Hampshire.