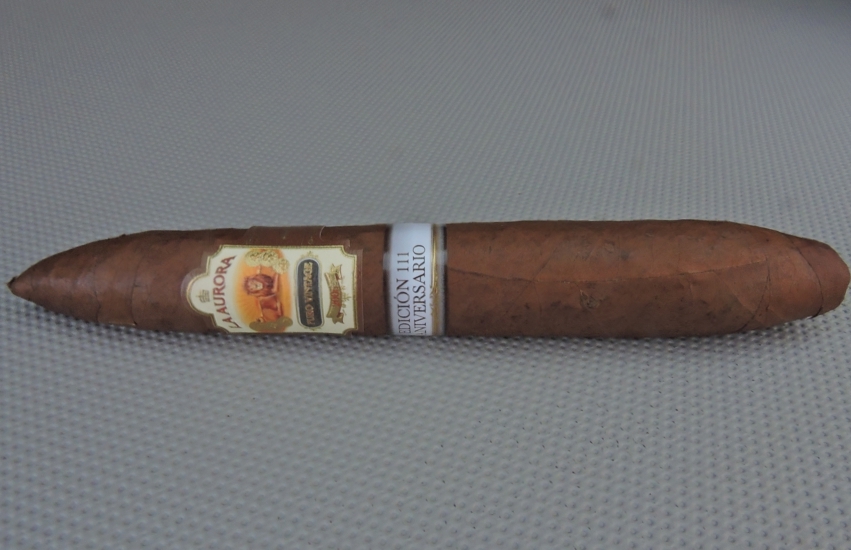 The La Aurora Puro Vintage 2006 Edicion Limitada 111 Aniversario is the fourth installment in La Aurora’s Puro vintage series.  The Puro Vintage series is a limited production line of salomon cigars where each installment of the series is made up of tobaccos harvested from a particular harvest year.  With the Puro Vintage 2006, all of the tobaccos come from a 2006 crop.  Recently, I’ve had an opportunity to smoke this cigar.  From a  flavor standpoint, I found this to be one of the better Puro Vintage releases and one that should satisfy many fans of this line.

The La Aurora Puro Vintage 2006 Edicion Limitada 111 Aniversario was first unveiled at the 2015 ProCigar Charity auction.  A special three box set of this cigar was auctioned to benefit the Voluntariado de Jesus con los Ninos and the Hospicio San Vicente de Paul.  The set consisted of not only box of salomons, but one box of a 5 x 54 Preferido size (La Aurora’s perfecto size) and one box of a 5 x 54 Robusto Extra size.  The Preferido and Robusto Extra were strictly made for the charity auction and there are no plans to release those sizes at this time.  Each of the boxes is reminiscent of the the original La Aurora boxes from 1903.  Cigar Aficionado reported the set ended up selling for $3,500.00.

The cigar has been dubbed a “Edicion Limitada 111 Aniversario” to commemorate La Aurora’s 11th anniversary. Technically this occurred in 2014 as the founding of La Aurora was in 1903.

Without further ado, let’s take a look at the La Aurora Puro Vintage Edicion Limitada 111 Aniversario and see what this cigar brings to the table.

(*) – For ProCigar Charity Auction early on.

The La Aurora Puro Vintage 2006 Edicion Limitada 111 Aniversario is packaged in 18 count boxes.  A total of 1,500 18 count individually numbered boxes of the salomon were produced. These boxes are also reminiscent of the original La Aurora packaging from 1903.

For completeness, we list the blends and sizes of the previous three installments.

The Ecuadorian wrapper has a coffee bean color. Upon closer examination, some darker marbling can be seen on the surface. The wrapper has a slight oily sheen to it. There are some visible veins and the wrapper seams are well-hidden. The salomon itself has an open footer and a pointed tip.

There are two bands on the Puro Vintage 2006.  The primary band features the La Aurora lion on a bright yellow background adorned with gold coinage around it.   The bright yellow component sits on top of a pale yellow component.  In maroon font, the words “LA AURORA” appear above the lion. Below the lion  is the text “PURO VINTAGE” in gold font on a black oval background with gold trim.  Below that is a gold ribbon with the text “2006” in red font. The remainder of the band has a brown background with some gold highlights.

There is a secondary band that is gray in color with a slight darkening gradient effect toward the top. On that background is the text “EDICÍON 111 ANIVERSARIO” in black.  There is black trim on the upper portion of the band and black and gold trim on the lower portion.

Prior to lighting up the La Aurora Puro Vintage 2006, I went with a straight cut to remove a small portion of the tip. Once the tip was clipped off, I moved on to the pre-light draw.  The cold draw provided a mix of chocolate, earth, and a tingly peppery spice.  Overall I considered the pre-light draw experience of this cigar to be very good.  At this point, I was ready to light up the Puro Vintage 2006 and awaited what the smoking phase would have in store.

The Puro Vintage 2006 started with a mix of exotic spice and earth notes.  It didn’t take long for some other notes to emerge.  First some notes of chocolate and natural tobacco surfaced in the forefront. The spices receded into the background and took on a multi-dimensional quality of exotic spice, black pepper, and baker’s spice.  I also detected a distant cream note in the background.  Meanwhile the retro-hale added some additional black pepper notes via the nasal passages.

During the second third the primary notes were a combination of earth and natural tobacco.  The chocolate notes took on more of a coffee note flavor.  The coffee floated between the forefront and background.  The combination of spices still remained a close secondary group of notes. There also were still were some distant cream notes.

The last third saw the spices move closer to the earth and natural tobacco notes.  The coffee notes were secondary while any creamy notes had dissipated.  This is the way the flavor profile remained until the end.  The resulting nub was cool in temperature, but soft to the touch.

Overall I did find that this burn needed some attention.  I found this burn to be somewhat jagged and meander from time to time. While touch-ups with the lighter did the trick, I found the Puro Vintage needed more of these touch-ups than I prefer. The resulting ash was a charcoal gray color.The ash itself was on the firm side. The burn rate and burn temperature were ideal.

The draw performed very well. It was not too loose, nor too tight.  The area where the tip was cut did not get soft. Overall the Puro Vintage 2006 was a low maintenance cigar to derive flavors from.

From a flavor standpoint, I found the Puro Vintage 2006 to be one of the better releases in this series. This cigar had a nice amount of complexity and flavor nuances.  The one drawback was the burn.  This wasn’t a terrible burn, but it required much more attention than I prefer and quickly reminded me why I can get frustrated by a salomon vitola.  In the end, the pluses did outweigh the minuses here as this is still a very good cigar.  This is a cigar I’d recommend to an experienced cigar enthusiast.  While a salomon is not a cigar I’d typically recommend to a novice, I would not discourage one from smoking this.  As for myself, this is a cigar I’d smoke again and it’s worthy of a box split.