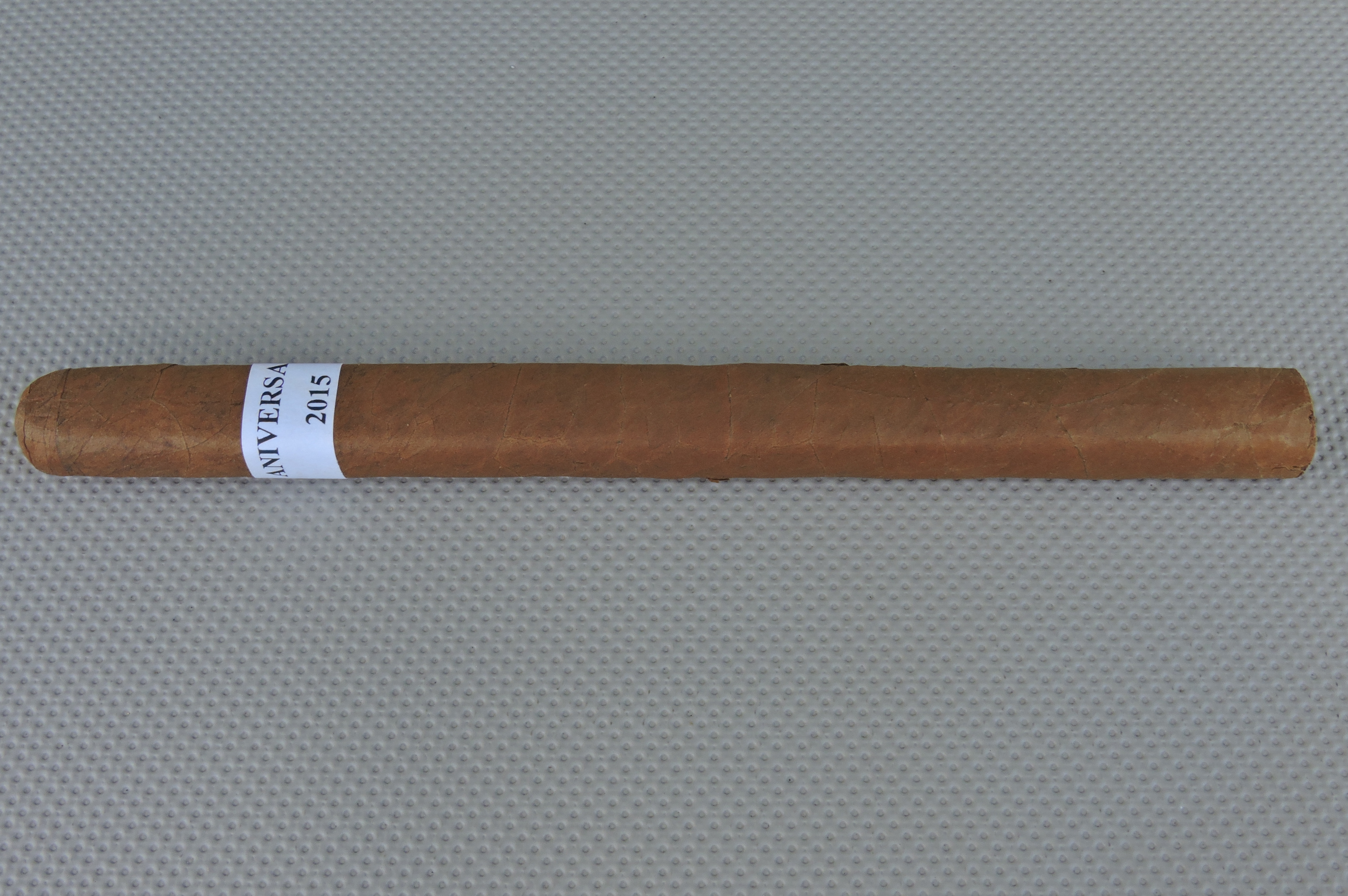 We now take a closer look at the Casa Fernandez Aniversario 2015 Voleur and see what this cigar brings to the table. Since the cigars smoked for this assessment were pre-release samples, we will default to our “pre-review” format and share some thoughts and perspective. After the Voleur hits the retailer shelves we will revisit this cigar and provide a formal assessment rating and score.

Like its the 2013 and 2014 editions, the two cigars making up the Aniversario 2015 are Nicaraguan puros featuring signature tobaccos grown at the company’s Aganorsa farms in Nicaragua. The cigar is being produced at the Casa Fernandez Miami factory in Miami, Florida.

As mentioned, the Aniversario 2015 is being produced in two sizes.

The Nicaraguan Corojo 99 wrapper from Aganorsa of the Casa Fernandez Aniversario 2015 Voluer has a combination of light caramel and rosado color to it. The wrapper itself has a light coating of oil. The cigar also has thin visible veins and thin visible wrapper seams. The box-press shape is firm with no soft spots.

At the time, the pre-release samples we smoked did not have the final bands on them.

Prior to lighting the Casa Fernandez Aniversario 2015 Voluer, I went with a straight cut to remove the cap. Once the cap was clipped, I moved on to the pre-light draw. The pre-light draw delivered a mix of natural tobacco sweetness with a slight touch of cherry. I also picked up a some pepper spice notes.  Overall I was quite pleased with the pre-light draw of the Voleur. At this point, I was ready to light up this cigar and see what the smoking experience would have in store.

The Casa Fernandez Aniversario 2015 Voleur continued the notes of natural tobacco and cherry sweetness that I got on the pre-light draw. I also picked up some notes of black pepper. As the Voleur progressed through the first third, the natural tobacco and cherry combination were the primary notes. The black pepper settled as a background note and had a slight lingering effect on the after-draw. I also detected some wood notes in the background. Meanwhile the black pepper was also present on the retro-hale.

By the start of the second, the natural tobacco and cherry morphed into a butterscotch-like sweetness. I found this sweetness to be the primary flavor, but it still very much had a tobacco-like taste to it. Meanwhile the wood and pepper remained in the background.

During the last third, the butterscotch sweetness receded into the background and was replaced by some earthy notes. The pepper slightly increased but did not become overpowering. I found the wood notes had dissipated. This is the way the cigar experience came to a close. The resulting nub was cool in temperature and slightly soft to the touch.

The Casa Fernandez Aniversario 2015 burned quite well from start to finish. The burn path remained straight from start to finish – requiring minimal touch-ups along the way. There was an occasional jagged spot on the burn line from time, but overall I found it to remain on the sharp side. The resulting ash was a light gray. For the most part, the ash was on the firm side and came off the cigar in clean chunks.  The burn rate and burn temperature were both ideal. 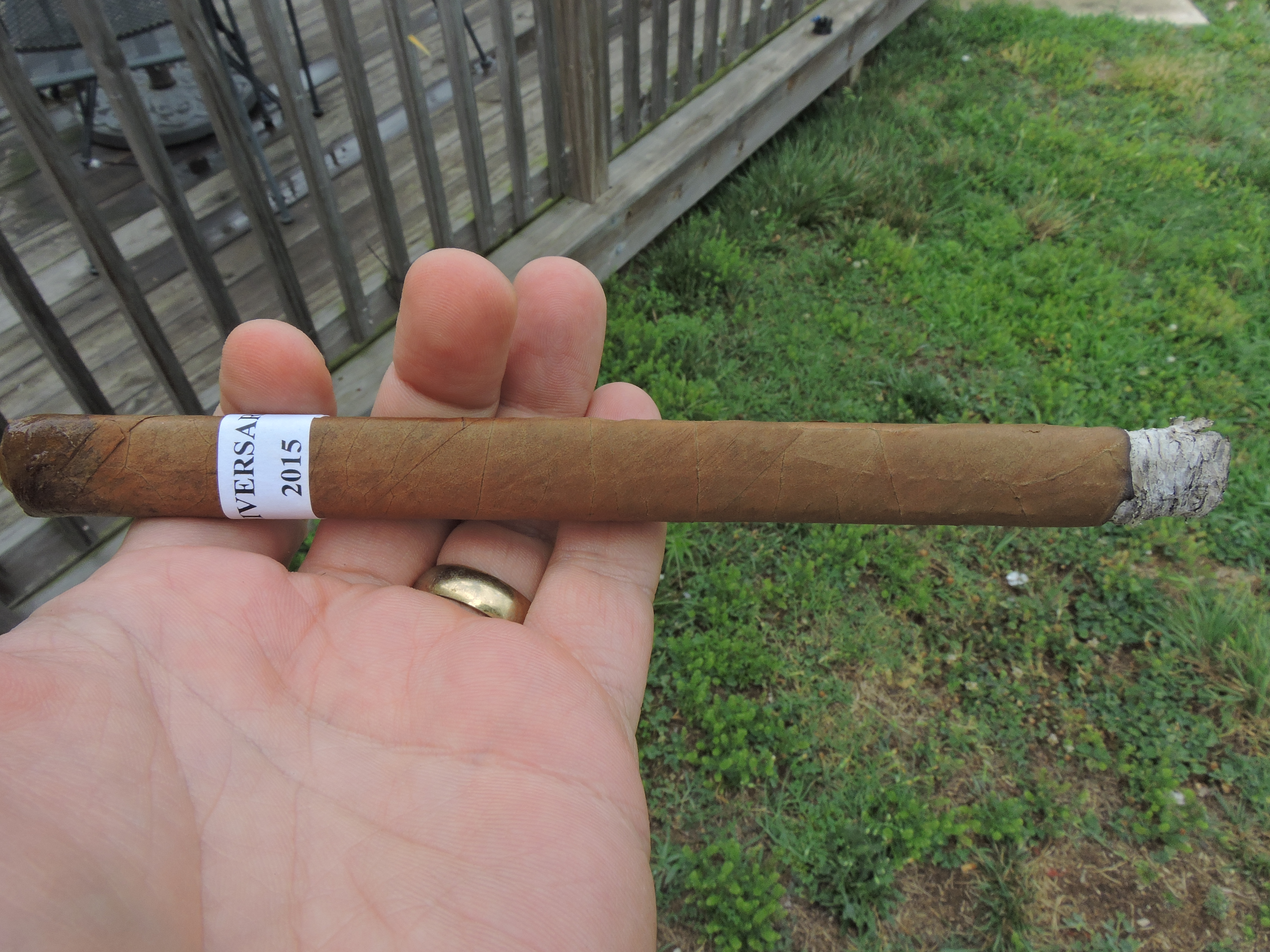 The draw of the Casa Fernandez Aniversario 2015 Voluer also performed very well. I didn’t find it too loose, nor was it too tight. This resulted in the Voluer being a low maintenance cigar to puff on from start to finish.

In terms of the Aniversario series, I found the Voluer to be a little more dialed back than its predecessors – especially during the early stages of the cigar experience. The Voluer started out medium strength and medium-bodied. Both attributes did increase in intensity as the smoking experience progressed. By the second half, the strength was medium to full and by the last third, the Voluer was also delivering medium to full-bodied notes.

In terms of strength versus body, both attributes are on even par during the first half. As the strength increased, it had the edge in the second half.

When it comes to the Anivesario series, Casa Fernandez seems to be firing on all cylinders – delivering excellent flavor, excellent construction, and a nice amount of complexity on this cigar. The Aniversario series has shown me it has a reputation to age quite well, so if the Casa Fernandez Aniversario 2015 Voluer holds to form, the sky is the limit where this cigar could go. Overall this would be a cigar I’d recommend to an experienced enthusiast, but wouldn’t discourage the novice looking to “graduate” to something fuller. This is a cigar that will also satisfy the die-hard lancero fans. As for myself, this is a cigar I’d smoke again and I look forward to when this arrives at retailers.