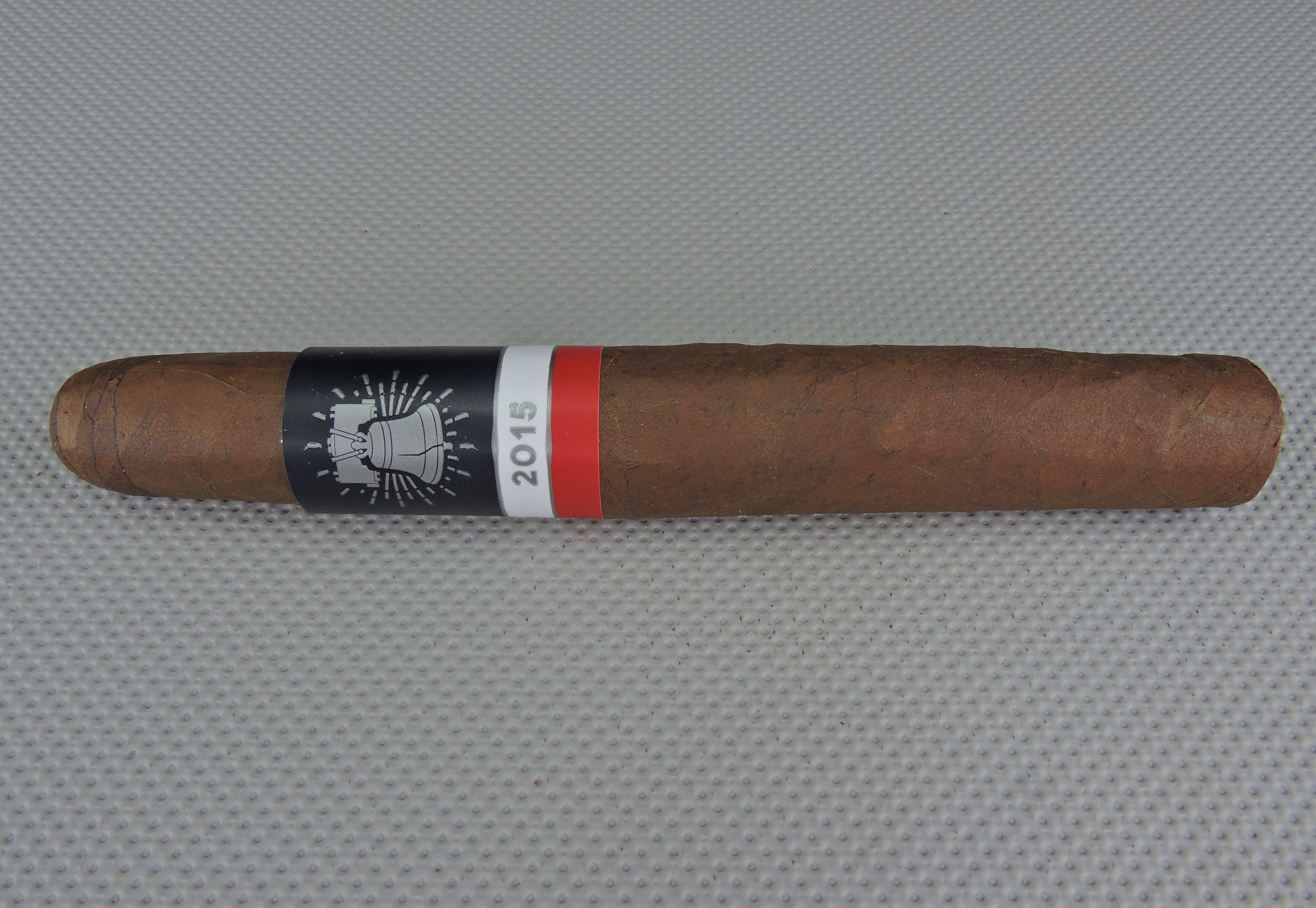 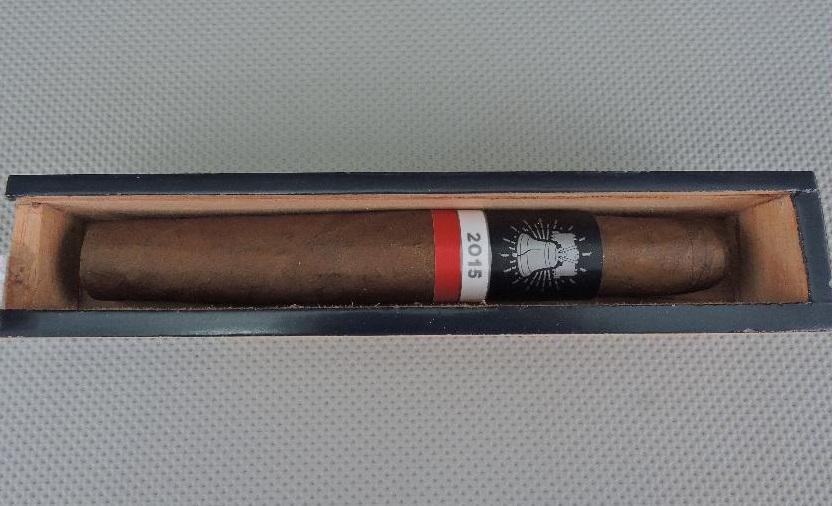 The Liberty Series made its debut in 2002, and for the most part it has been one size, one vitola (the initial Liberty Series 2002 did come in 5 sizes, the 2004 edition came in two sizes). In 2010, we ranked the Camacho Liberty as our #9 cigar of the year.  The Camacho Liberty 2015 is the third Liberty to be released since the rebranding of Camacho in 2013.

Without further ado, let’s take a closer look at the Camacho Liberty 2015 and see what this cigar brings to the table.

As mentioned, the Camacho Liberty 2015 is a Nicaraguan puro:

As has been the tradition of the Camacho Liberty series, the blend is being released in one size – a figuardo known as 11/18. The 11/18 name was established when Christian Eiroa owned Camacho – it refers to a unique figuardo shape and was named for the date of Eiroa’s mother’s birthday. The Camacho Liberty 2015’s dimensions are 6 x 48/54/48. 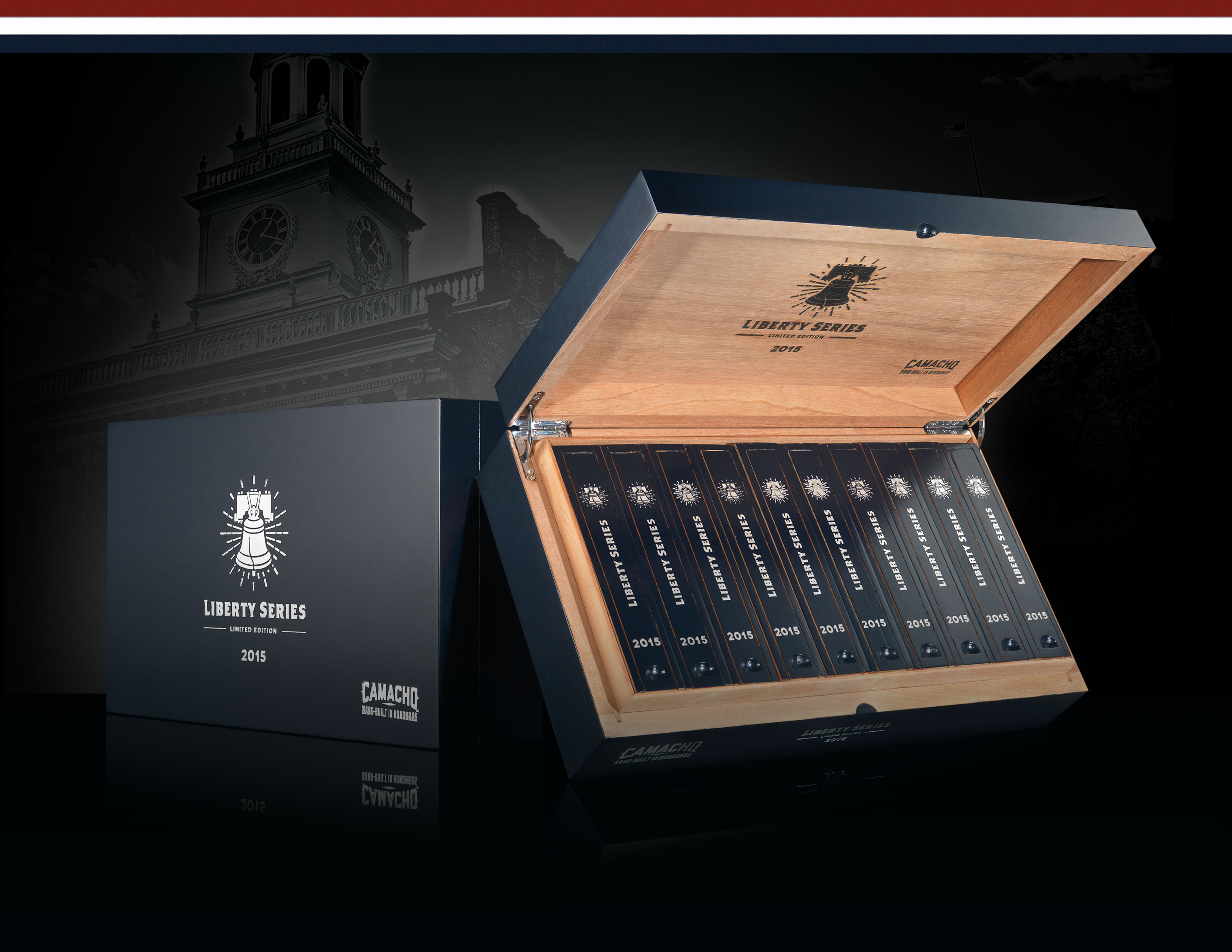 The Nicaraguan wrapper to the Camacho Liberty 2015 has a medium brown color with a slight colorado red tint to it. The wrapper has some oil on it, but I wouldn’t consider it an “oily wrapper”. There are some visible veins and visible wrapper seams.  The surface of the wrapper has a light coating of oil on it. The 11/18 figuardo shape holds true to form with previous editions. The cigar is widest in the middle. There is a gentle tapering toward both the cap and the tapering toward the footer is even more gradual.

The band is an all new design by not only Liberty standards, but for Camacho as a whole. There is a thick blue stripe covering the upper two thirds of the band.  The lower third has a white and red stripe. On the blue stripe is a silver Liberty Bell with the appearance of the bell “ringing”.  On the white stripe is the text “2015” in silver font. On the right side, there are four lines of text in silver font arranged in landscape mode.  The text is “CAMACHO” (in the brand’s logo font), “LIBERTY SERIES”, “LIMITED EDITION”, and “HAND BUILT IN HONDURAS”.

The back of the band contains the following text that is found on the Liberty Bell.

“PROCLAIM LIBERTY THROUGHOUT ALL THE LAND UNTO ALL THE INHABITANTS THEREOF LEV XXV VX. BY ORDER OF THE ASSEMBLY OF THE PROVINCE OF PENNSYLVANIA FOR THE STATE HOUSE IN PHILA. PASS AND STOW PHILADA MDCCLIII”. 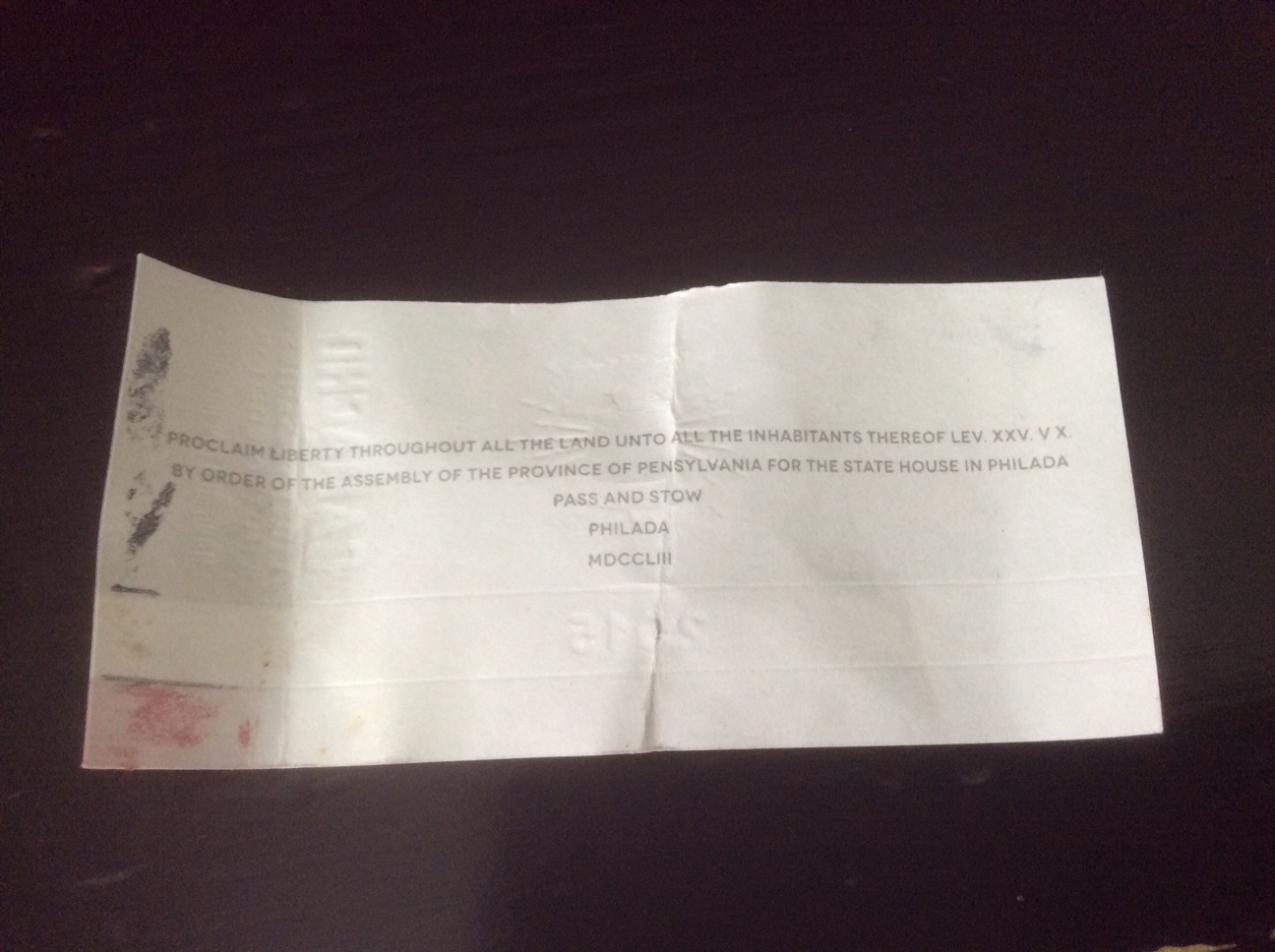 Back of the Camacho Liberty 2015 Band

The coffin box is similar to many of the other Camacho Liberty coffin boxes. It is unfinished on three sides, but the top is painted blue – including the slide top.  The text “LIBERTY SERIES” is printed in silver font. To the left of the text is “2015” in silver font in landscape mode. To the right (also in landscape mode) is a silver Liberty Bell – also with the ringing effect.  The front of the coffin has a blue label that with silver font. The label has the text “LIBERTY SERIES”, “LIMITED EDITION”, “2015” arranged on three lines. Just below that is the cigar number (in white font) from the batch produced. In this case, the number is “183/40,000”. There is a green and white seal on the end where the slide top comes off. The cigar itself inside the coffin is wrapped in tissue paper. 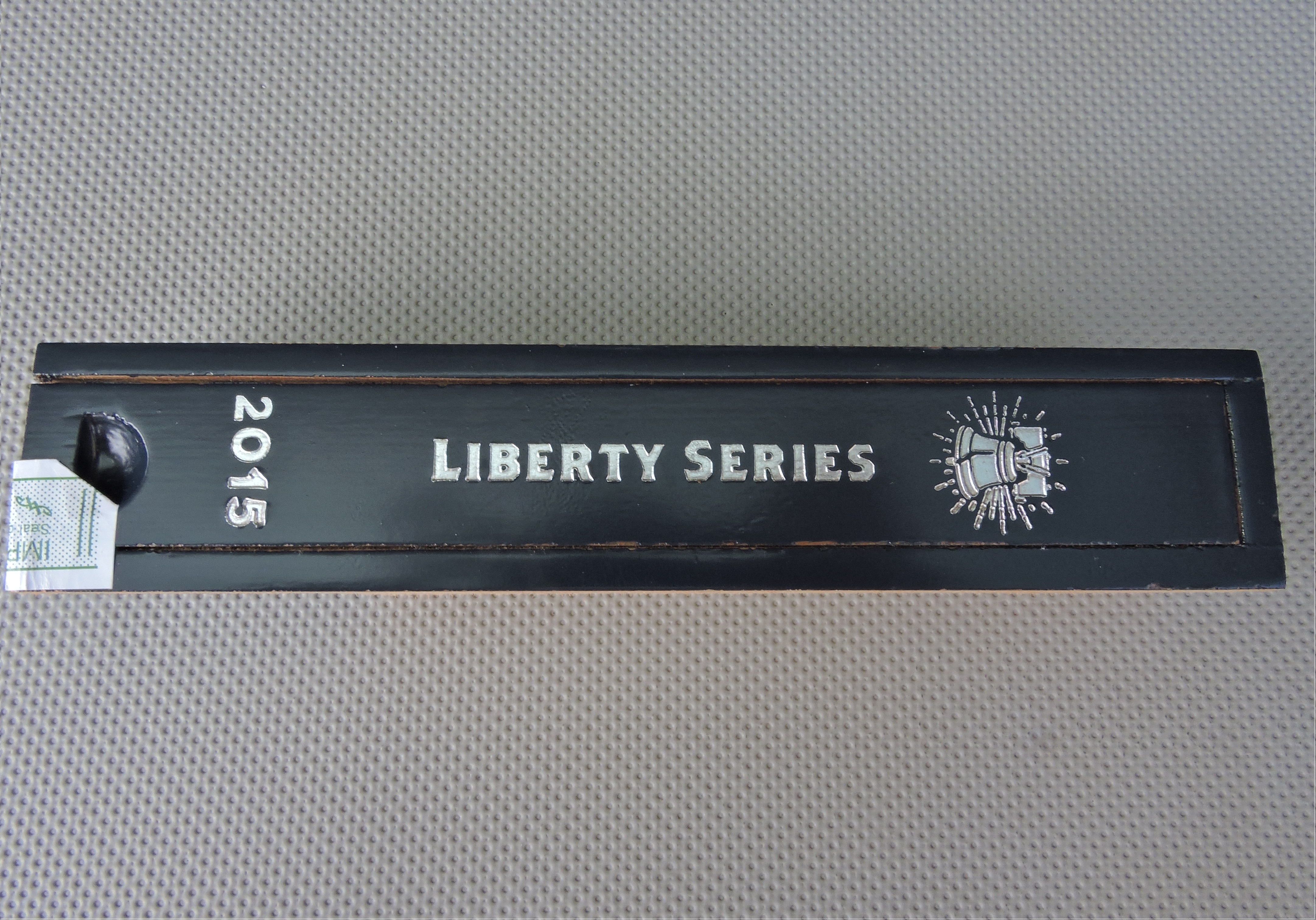 As I normally do, I went with my choice of a straight cut to remove the cap of the Camacho Liberty 2015. Once the cap was removed, I proceeded with the pre-light draw. The wood inside the coffin box definitely influenced the pre-light draw as I picked up notes of cedar (more on the sweet, than spicy side), earth, and wood. I also picked up notes of chocolate and earth. Overall I considered the pre-light draw experience to be excellent. At this point I was ready to light up the Camacho Liberty 2015 and see what the smoking experience would have in store.

Right out of the gate, I got a combination cedar, black pepper, and white pepper. The cedar had a little more spice than it did on the pre-light draw. It didn’t take long for some notes of chocolate and earth to surface in the background.  The cedar was also prominent on the retro-hale.

During the first half of the cigar, I found the cedar notes to be primary – continuing to deliver both spice and sweetness. The pepper notes were a little more distant. Meanwhile, the earth and chocolate notes floated between the background and forefront.

During the second half, I noticed the pepper became more prominent, but it still seemed like the cedar had the edge.  The chocolate and earth continued to float in and out, but a lot less than it did in the first half. This is the way the flavor profile held until the end. The end of the cigar definitely had some spice, but it was not overwhelming on the palate. The resulting nub was firm to the touch and cool in temperature.

In terms of the burn I did it started out well, but as the cigar progressed to the wider part of the cigar, it required much more in the way of touch-ups to keep the burn going straight. When the burn reached the part of the cigar where the ring gauge reduced in size toward the cap, the burn didn’t require as much maintenance. The resulting ash was firm early on, but it got looser as the cigar burned. The burn rate and burn temperature remained fine – and I considered both ideal. 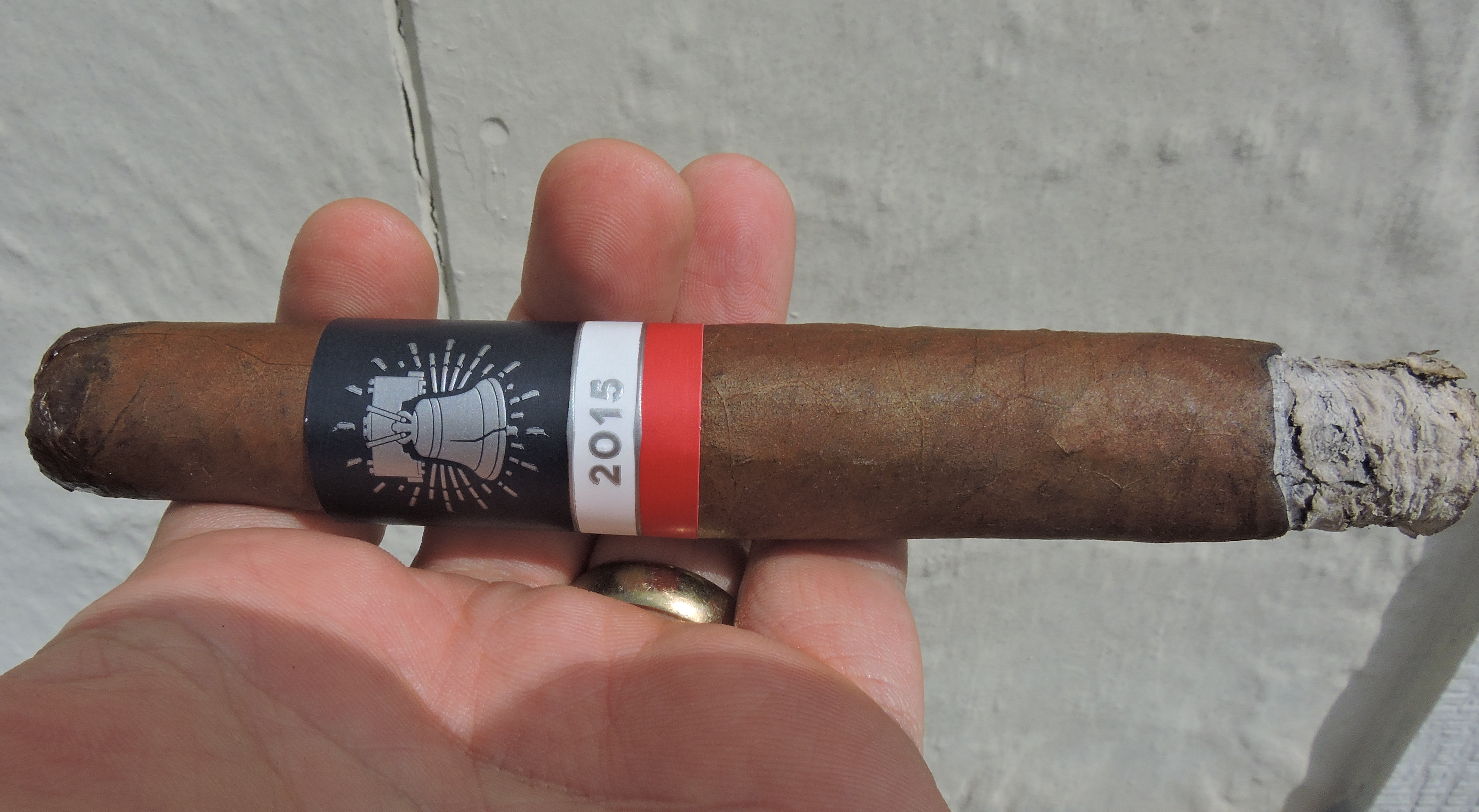 Burn of the Camacho Liberty 2015

The draw performed quite well. I’d categorize this as an open, but not a loose draw. This pretty much was a low maintenance cigar to puff on.

With the Camacho Liberty, I found both the strength and body lived up to Camacho’s reputation for “the Bold Standard”. The Camacho Liberty 2015 started out a medium to full strength cigar – and it pretty much stayed there. In terms of the body, I also found the Liberty 2015 to start out medium to full. Toward the second half of this cigar this developed into a full-bodied smoke.  In terms of strength versus body, I found both attributes to be even early on, but during the second half, the body had the slight edge.

The Camacho Liberty Series is one I look forward to every year. I’ve found most of the cigars in the series to be enjoyable and certainly worthy of a purchase. As I mentioned, what I really like is how each year seems to bring something new to the table.  With the Camacho Liberty 2015, it fits all of the characteristics.  On the other hand, I’m still waiting for one of those standout Liberty cigars like we saw 5 to 8 years ago. The Camacho Liberty 2015 is a good cigar, but it wasn’t one of those standout ones – especially at the $18.00 price point. The one upside is while this was a cigar ready to smoke right out of the gate, my gut tells me there is some serious aging potential. Overall this is a Liberty I would steer to a more seasoned cigar enthusiast – especially one who enjoys spice on a cigar. As for myself, it’s a cigar I would smoke again – especially because of the aging potential. It’s definitely worthy of trying one when you see them at your local tobacconist.