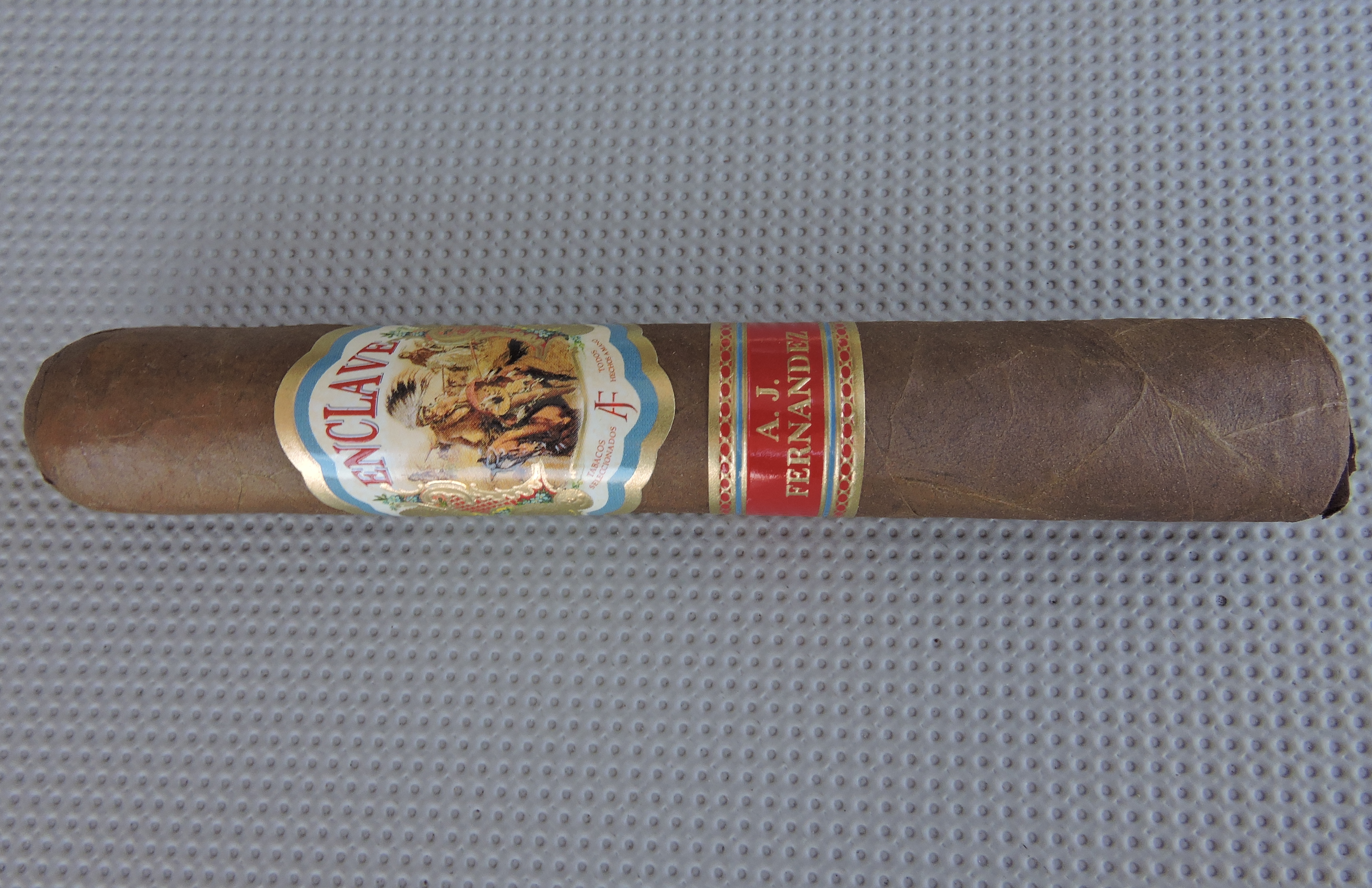 Just prior to the 2015 IPCPR Trade Show, A.J. Fernandez Cigars announced the Enclave. The Enclave continues along the path of the recently released New World line of cigars. Like New World, it is another project that is a collaboration between A.J. Fernandez and his father Ismael. Also like the New World line, Enclave provides another value-priced cigar in the $6.00 to $7.00 range. When Enclave was formally unveiled at the trade show, it proved to be one of the hottest cigars with plenty of orders written. Once the trade show closed, the cigars quickly made their way to retailers. The Fernandez Father / Son collaborations have put A.J. Fernandez on a roll – and the Enclave is no exception.  I recently have had an opportunity to smoke the Enclave in the Robusto format.  Overall this one is another all-around winner.

Without further ado, let’s break down the A.J. Fernandez Enclave Robusto and see what this cigar brings to the table.

The best way to sum this blend up is that it is very different than most A.J. Fernandez Blends.  Most notably is the use of Cameroon for the binder and Piloto Cubano in the filler.

The Enclave is available in four sizes.  Each of the four sizes have a 52 ring gauge.  The cigars are packaged in 20 count boxes.

The A.J. Fernandez Enclave Robusto’s Ecuadorian Habano Rosado wrapper had what I would describe as a medium to dark brown color. The surface of the wrapper was smooth with a light coat of oil on it. There were some visible veins as well as some visible wrapper seams.  The footer of the Enclave had a slight covering on it.

There are two bands on the Enclave.  The primary band has a portrait of a native American on the front sitting on an antique colored background.  Above the portrait is the text “ENCLAVE” in large red font with the letters getting larger toward the center of the word. There are gold medallions to the left and right.  On each side there is one gold medallion on a blue background.  Above that medallion is the text “A.J. FERNANDEZ” in small white font while below that medallion is the text “ESTELI, NICARAGUA” that is also in small white font. Below the portrait is a red “AJF” logo. To the left of the logo is the text “TABACOS SELECCIONADOS” while to the right is the text “TODOS HECHO A MANO” – both in small red font. The remainder of the band has blue and gold trim. The back of the band contains a signature which appears to be A.J. Fernandez’s

The secondary band sits just below the primary band. The band is red in color with the text “A.J. FERNANDEZ” in gold font. The far right of the band has a blue square with the AJF logo in gold. The upper and lower part of the band has red, gold, and blue trim.

Prior to lighting the A.J. Fernandez Enclave Robusto, I went with my usual choice of a straight cut. Once the cap of the cigar was removed, I moved on to the pre-light draw. The cold draw delivered a mix of nut, chocolate, cedar, and a little bit of cream. Overall I considered this to be an outstanding pre-light draw experience. At this point I was ready to light up the Enclave Robusto and see what the overall smoking experience would have in store.

The start to the Enclave Robusto picked up where the pre-light draw left off as I continued to get notes of chocolate, cedar, nut, and cream. The chocolate notes became primary while the nut, cedar, and cream notes were in the background. The cedar notes seemed to deliver more sweetness on the tongue. At the same time, there was more of a spicy quality to the cedar on the retro-hale. There was also some white pepper mixed into the retro-hale.

Throughout the first third, the chocolate notes were the primary note and the flavor was enhanced. Once the Enclave moved into the second third the cedar notes increased. Close to the midpoint of the cigar experience, the cedar and chocolate notes were on equal footing. Meanwhile, the cream and nut notes remained in the background.

Later in the second third, some pepper folded in with the cedar. The spice component definitely increased and pretty much remained on par with the chocolate during the last third. By this point, the cream and nut notes pretty much dissipated. This profile continued as the cigar experience came to a close. The resulting nub was outstanding – cool in temperature and firm to the touch.

The burn of the A.J. Fernandez Enclave smoked quite well.  Each of the samples I smoked maintained a straight burn path. On the actual burn line, some of the samples burned sharper than others; but overall this still proved to be a low maintenance burn.  The resulting ash was quite firm and had a nice white color to it.  The burn rate and burn temperature were ideal. 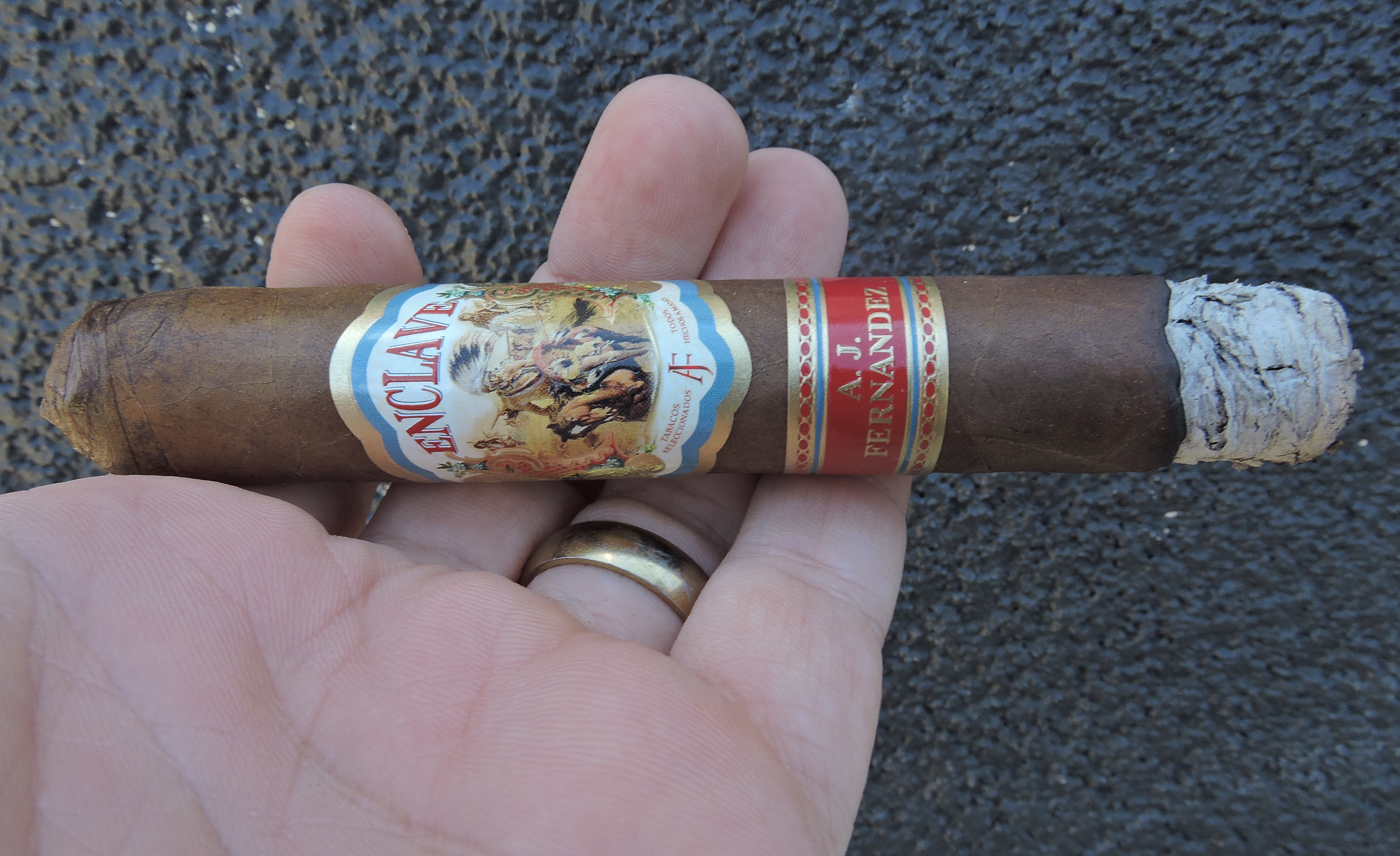 The draw of the Enclave also performed quite well.  It was a draw I’d categorize as open, but not loose. I’d use the words low maintenance to apply to the draw as well.

From a strength perspective, I found the Enclave to have just enough kick to qualify as a medium to full strength cigar. There was a slight increase in strength along the way, but overall the strength level pretty much stayed in the medium to full range. As for the body, I also found it to be in the medium to full range.  The body did increase gradually (and at a slightly more rapid rate than the strength increases). By the last third, I found the flavors to be in the full-bodied range. In terms of strength versus body, while I assessed both to be “medium to full” for most of the smoking experience, I still found the body had the edge throughout the smoking experience.

Over the past twelve months, A.J. Fernandez has made a strong push into the “value priced” market with the releases of New World, New World Connecticut, and now Enclave.  In each case, the company has delivered a high quality smoke that could easily be mistaken for a pricier cigar. Flavor-wise, each of the three releases are very different, but have one common denominator – each has an excellent flavor profile.  The chocolate, cedar, nut, and cream notes really work well together with this blend. This is a cigar I’d recommend to an experienced cigar enthusiast. I wouldn’t discourage one from trying it.  I found this a great cigar to “graduate” to something a little fuller and a little stronger.  As for myself, this is a cigar I’d easily smoke again. It’s definitely worthy of a box purchase.