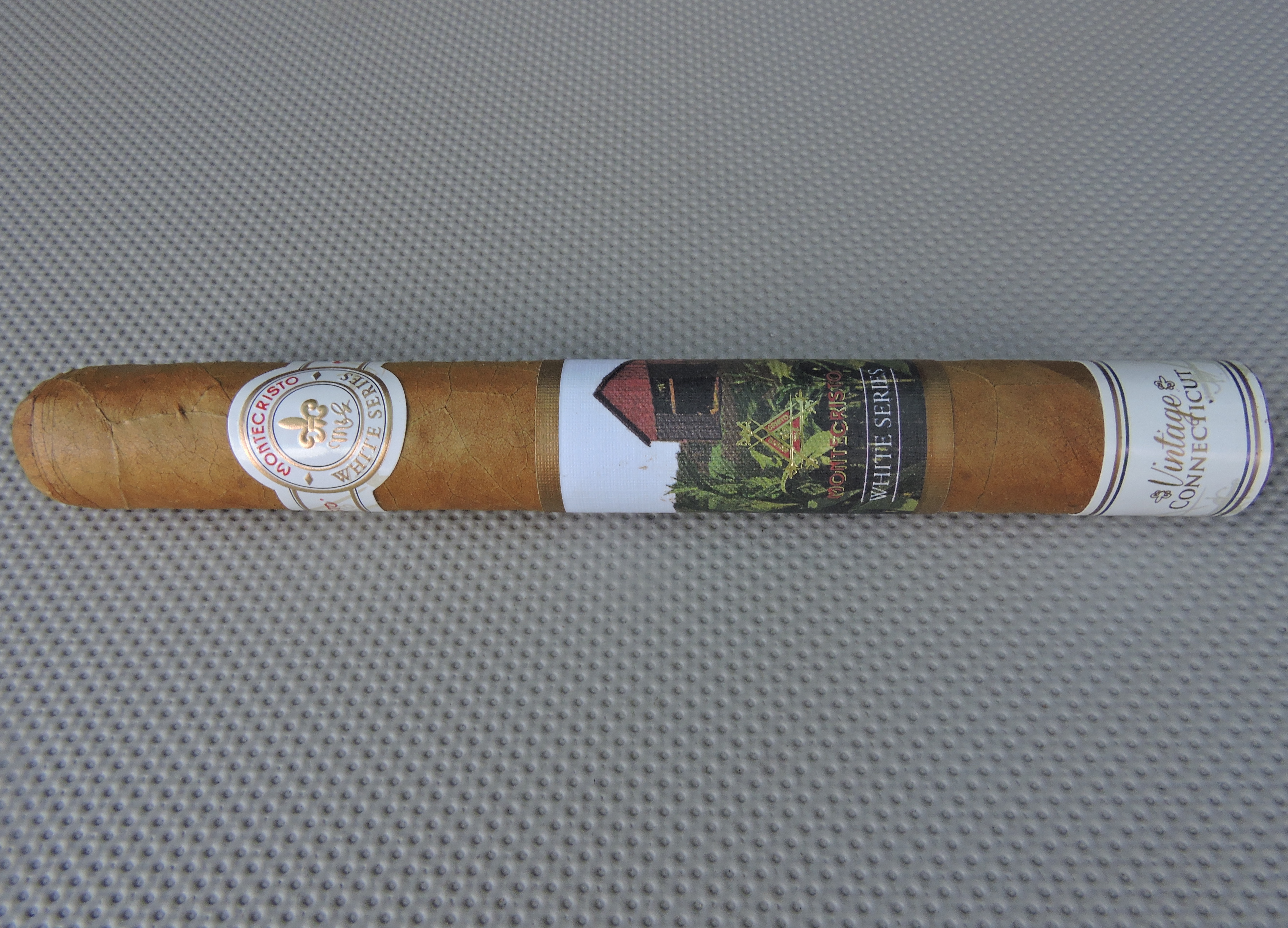 Without further ado, let’s take a closer look at the Montecristo White Vintage Connecticut Double Corona and see what this cigar brings to the table.

The Montecristo White Vintage Connecticut is available in three sizes.  Each of the three sizes is packaged in twenty count boxes. 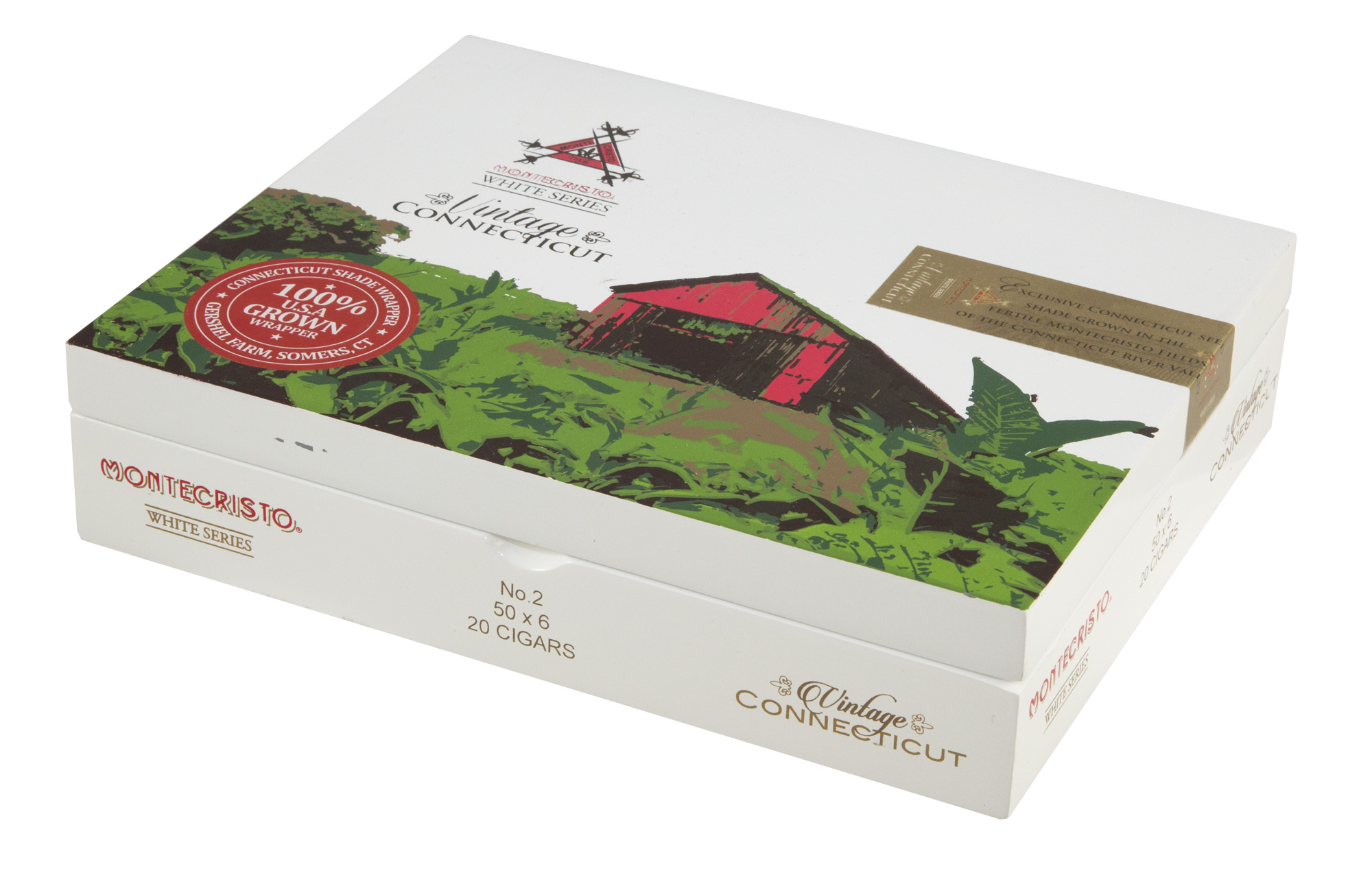 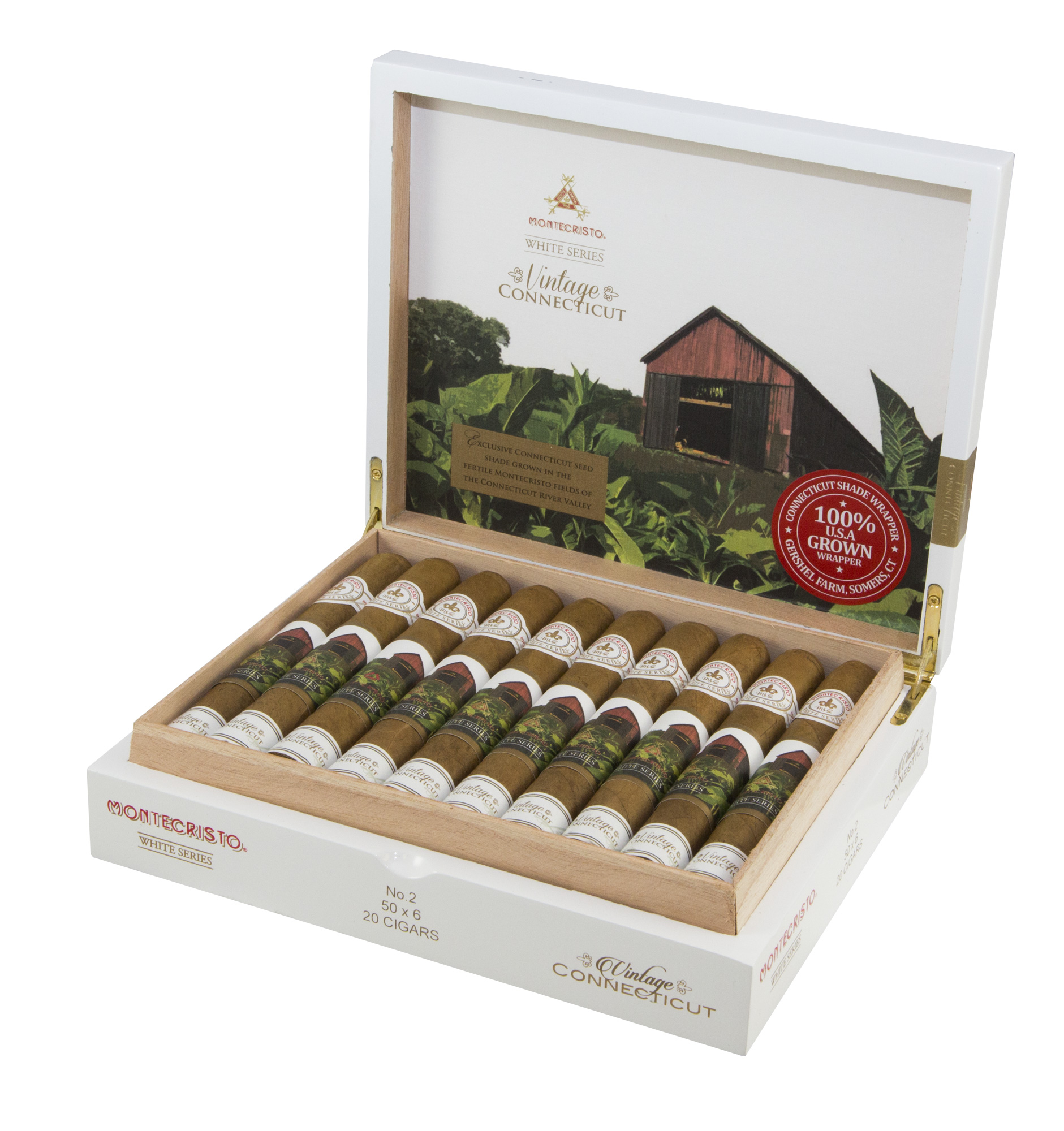 The wrapper to the Montecristo White Vintage Connecticut Double Corona has a weathered light brown color. The wrapper has a nice sheen of oil around it.  There are some visible veins and visible wrapper seams.  On a side note, there is a prominent barnyard aroma that comes from the wrapper. 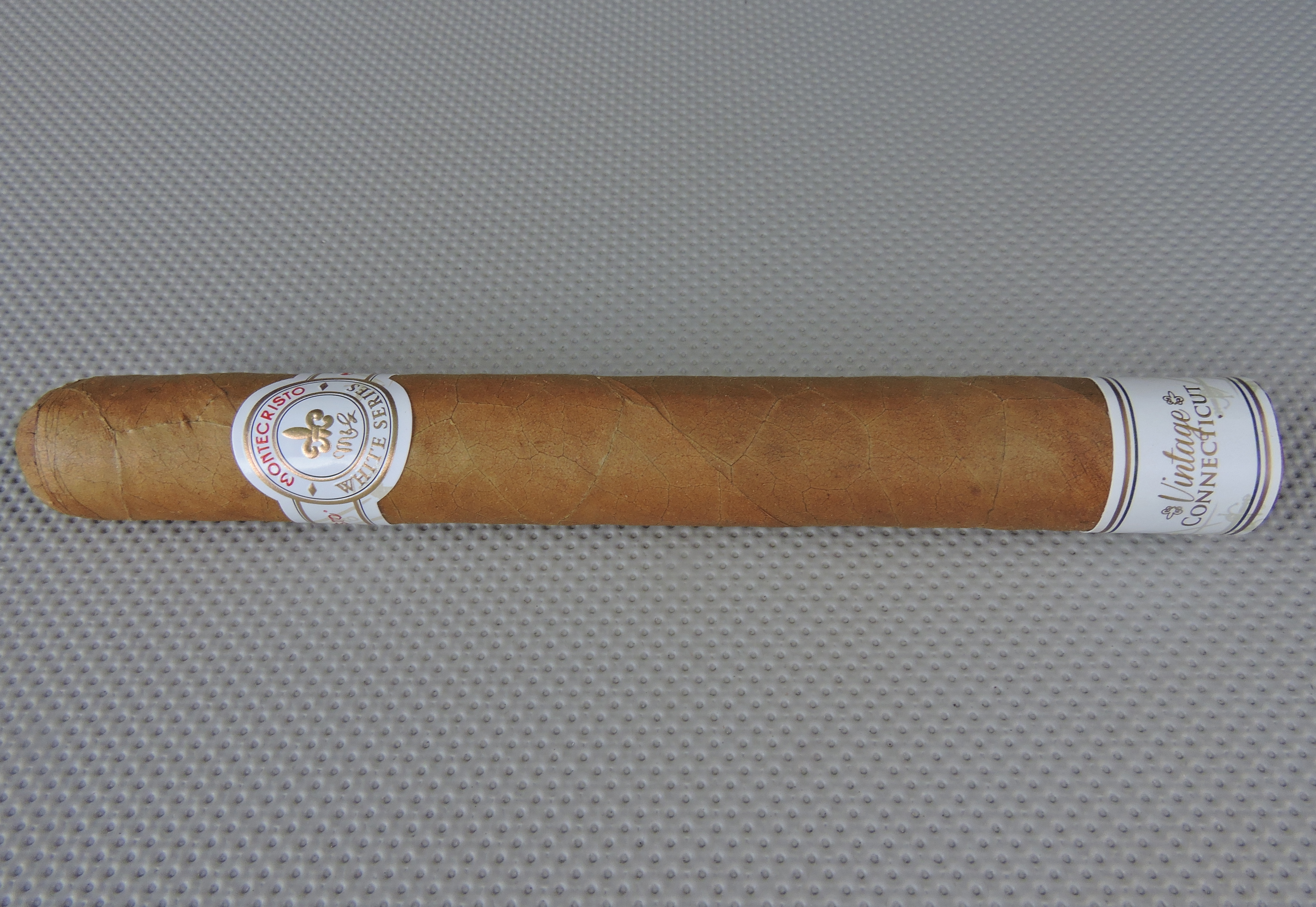 There are three bands on the Montecristo White Vintage Connecticut. The first band is pretty much the same as the one on the Montecristo White Series. It is a white colored band. The center of the band contains a gold fleur-de-lis with gold initials under it.  The logo is surrounded by two concentric gold rings. In between the rings is the text “MONTECRISTO” across the top in red font and “WHITE SERIES” across the bottom in small gold font. To the left and right of the circular design is the text “MONTECRISTO” in red font with a Montecristo pyramid watermark in the background. The remainder of the band has gold pinstripe accented slightly with black.

The secondary band is more like a small sleeve. It rests just below the halfway point and measures about 2 1/2 inches in length. The band contains a graphic of a tobacco barn surrounded by tobacco fields. There is gold trim across the top and bottom. Across the band is the red and gold Montecristo pyramid logo with the text “MONTECRISTO” in red. Just below that is the text “WHITE SERIES” surrounded by a thin white trim. The remainder of this band has gold trim across the top and bottom.

Finally there is a white footer band. It contains white and black pinstriping near the top and bottom. There are two Montecristo pyramid watermarks. On the center of that band is the text “Vintage” in gold cursive font. Just below it is the text “CONNECTICUT” – also in gold font.

For photography purposes I pulled off the middle band of the Montecristo White Vintage Connecticut Double Corona before commencing the smoking experience. I then proceeded to clip the cap off the cigar. Once the cap was removed, I moved on to the pre-light draw. The dry draw was simple as I got notes of cream and wood.  There wasn’t much in the way of sweetness or spice. While the pre-light draw didn’t have me doing handstands, it wasn’t a bad one either. At this point I removed the footer band, lit up my Montecristo White Vintage Connecticut and awaited what the smoking phase would have in store.

The start to the Montecristo White Vintage Connecticut Double Corona delivered a mix of cream, wood, black pepper, and a slight generic citrus note. There was a slight sour quality to the citrus note, but it still provided a nice amount of sweetness.  As the cigar experience progressed through the first third, the cream and citrus notes became primary – both notes alternating in intensity. The black pepper was in the background, but I could also pick it up on the retro-hale. The wood notes were in the more distant background.

During the second third, I did see an increase in the black pepper notes.  I found this flavor moved into the forefront and now alternated with the cream as to what was the dominant note. The citrus notes were now in the background, but were definitely playing a lesser role.

By the last third, the citrus and wood had dissipated.  The black pepper and cream were pretty much the main flavor notes. I didn’t find the pepper to be overwhelming.  This is the way the cigar experience came to a close.  The resulting nub was firm to the touch and cool in temperature.

From a burn standpoint, the Montecristo White Vintage Connecticut Double Corona gets a near perfect score. The burn path remained straight from start to finish and the actual burn line itself was near razor sharp. The cigar itself required very few touch-ups along the way.  The resulting ash was a silvery gray with some darker spots mixed in.  The ash was tight and firm and came off the cigar in nice clean chunks. The burn rate and burn temperature were ideal. Overall, this cigar earns the highest rating for a burn – “Exceptional”. 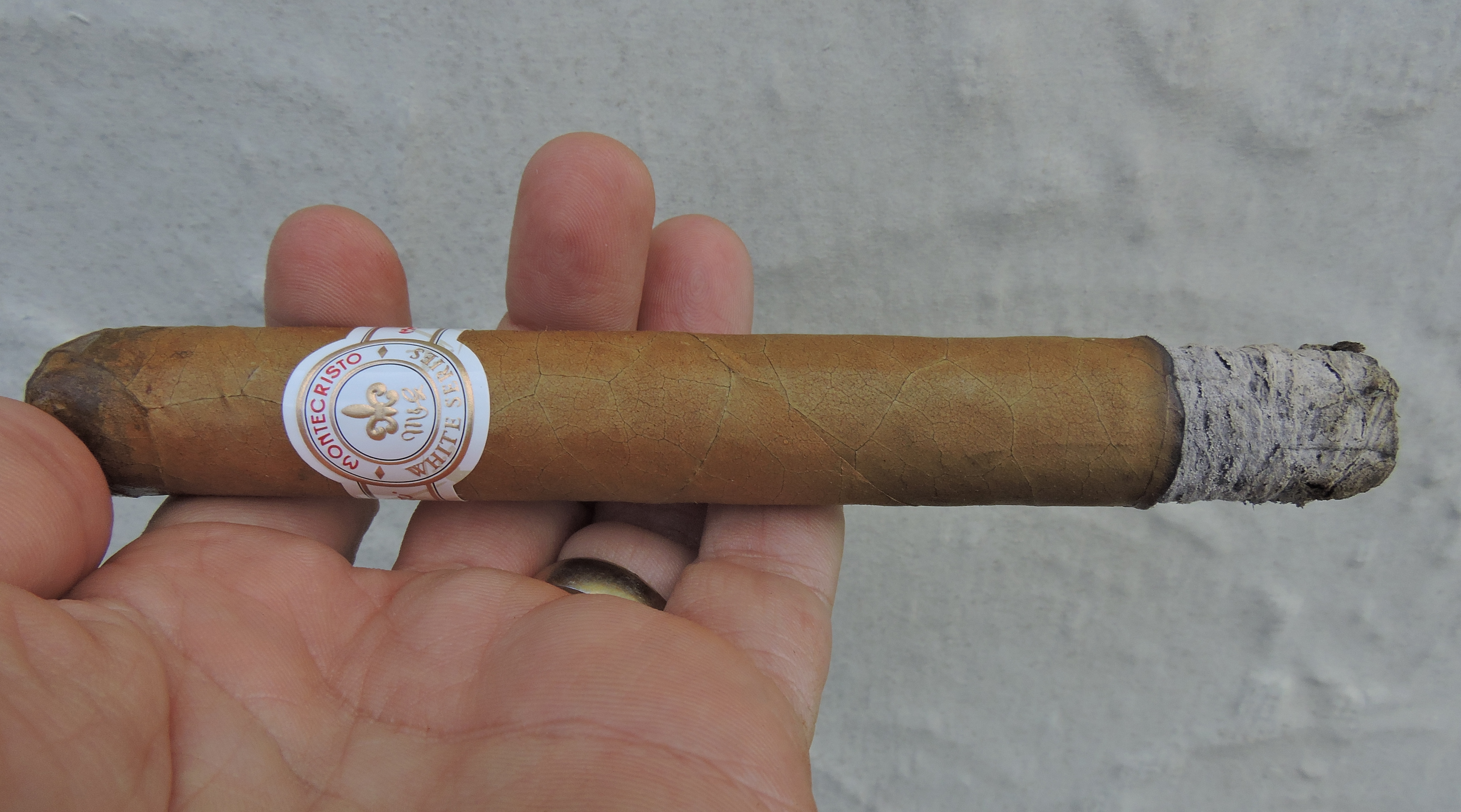 The draw to the Montecristo Vintage White Connecticut Double Corona also scored very high. It had a touch of resistance to it – which is something I like.  This made for a very enjoyable smoke.

It wasn’t surprise, but the Montecristo Vintage White Connecticut was nowhere near a nicotine bomb. I assessed this cigar as being a mild to medium strength cigar from start to finish. As for the body, I also found it to be in the mild to medium range. By the second half, I found it had progressed into medium-bodied territory.  In terms of strength versus body, I gave a slight edge to the body.

Overall I found the experience of the  Montecristo Vintage White Connecticut Double Corona to be positive. There are two negatives I will mention. First, I did get some sourness one each of the samples. The sour note is something I have found with other U.S. Connecticut shade cigars in the past. On one of the samples, I did find the sourness to be a little excessive. The other samples weren’t as bad, but I could still detect it. Secondly, this an overly complex cigar in terms of flavor nuances or flavor transitions. In the end, I still found this a case of the positives outweighing the negatives. It’s a cigar I’d recommend to a novice cigar enthusiast or an experienced one who appreciates a Connecticut Shade cigar. As for myself, it’s a cigar I’d smoke again and it’s one worthy of a fiver.