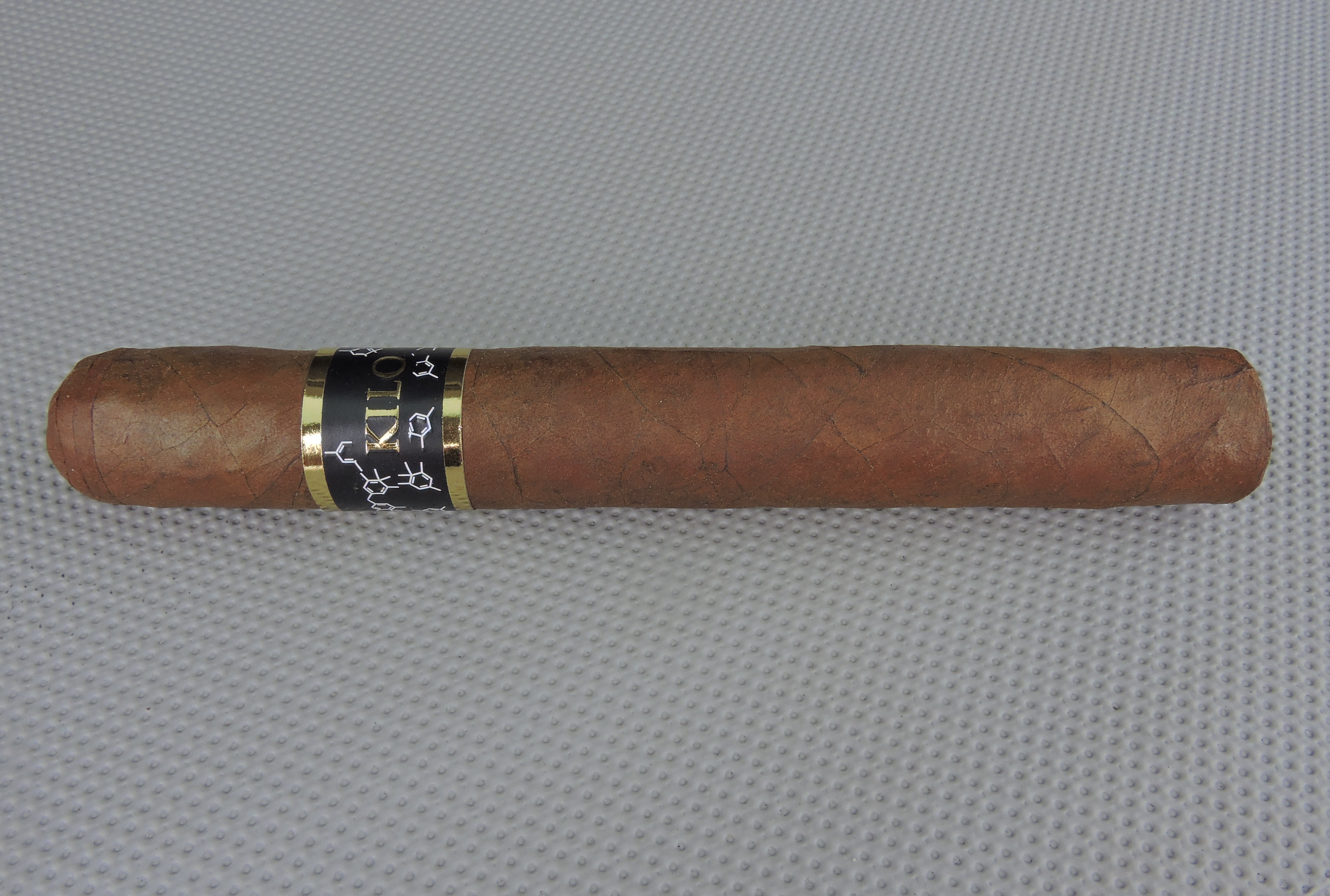 In 2015, United Cigar introduced the KILO line into its portfolio. The origin of the KILO brand can be traced back to Miami Cigar and Company where it was a blend developed by Barry Stein who was the company’s Assistant Director of Marketing. The KILO would then go on to have a small limited production run. Stein would depart Miami Cigar in 2014 and would join the team at Two Guys Smoke Shop and The Cigar Authority, both of which are owned by David Garofalo. Stein was allowed to take the KILO trademark with him, and soon work began on bringing KILO back to the market. To produce the new KILO, Stein would work with Noel Rojas, who owns Guayacan Cigars and the Aromas de Jalapa factory in Esteli, Nicaragua. That blend has now become a regular production offering distributed by United Cigar – also owned by Garofalo. Recently, I’ve had an opportunity to smoke the 2015 version of the KILO in the Toro size. Overall I found this to be an impressive and enjoyable cigar that packs a punch.

On Episode 149 of Stogie Geeks, Stein mentioned he had always wanted to make a cigar out of Nicaragua and in particular Rojas, but because Miami Cigar was locked into an existing factory, this was not possible. Once he joined up with United Cigar, he was given the green light to work with Rojas.

With the first KILO, Stein set out to prove he could make a powerful and flavorful cigar that didn’t taste like it came out of the Dominican Republic. Stein also mentioned on Stogie Geeks that he had felt there still was something missing from that original blend, so when he worked with Rojas some changes were made and the result was the new KILO.

As for the name, Stein said the name was inspired by the movie Cocaine Cowboys. This is a 2006 documentary that explores the rise of the drug trafficking business and resulting crime wave that engulfed Miami, Florida back in the late 1970s and early 1980s.

Without further ado, let’s take a look at the KILO by United Cigar and see what this cigar brings to the table.

The original KILO was a five country multi-national blend. The new KILO features a Nicaraguan-centric blend with an Ecuadorian Habano wrapper. The Nicaraguan tobaccos come from the Aganorsa farms as well as Rojas’ farms.

There are two sizes of KILO. Each is available in 18 count boxes:

The KILO Toro consists of a caramel colored wrapper. Depending on how the light hits the wrapper, it might showcase a slight colorado red tint to it. There is some oil on the surface of the wrapper. There are also some visible veins and some thin visible veins.

The KILO 2015 edition features a black band with thick gold foil trim across the top in bottom. The text “KILO” is prominently on the center of the band.  The band is adorned with white colored geometric design representing the compound of the element of Gold (Au). To the far right is the United Cigar logo surrounded by circular gold foil trim.

Prior to lighting the KILO Toro, I went with my usual choice of a straight cut to remove the cap. Once the cap was removed, I moved on to the pre-light draw. The dry draw provided notes of natural tobacco with a   cotton-candy-like sweetness. There was also a peppery tingly spice I detected. Overall I considered the pre-light draw experience of the KILO to be excellent. At this point I was ready to light up the KILO Toro and see what the smoking phase would have in store.

The start to the KILO Toro delivered notes of grass and natural tobacco. The natural tobacco had a nice sweetness with almost a cherry component to it. In the background I detected some notes of cream and white pepper. The white pepper was quite prominent on the retro-hale.

By the midway point of the first third, I found the natural tobacco sweetness took on some caramel qualities to go along with the cherry component. The grassy notes diminished and joined the cream and white pepper notes in the background. As the KILO Toro moved through the second third, the pepper notes slowly increased in intensity.

As the KILO Toro reached the later stages, I found the grassy notes resurface in the forefront. While the pepper notes had increased, they never took over the flavor profile. The sweetness I had found during much of the cigar experience had diminished somewhat, but was not totally out of the picture. Meanwhile, the creamy notes had dissipated. I found the finish to the KILO Toro a little rough, but not harsh. The resulting nub was slightly soft to the touch, but cool in temperature.

The construction to the KILO Toro was excellent and this reflected very nicely on both the burn and draw attributes. Both the burn line and burn path remained relatively straight from start to finish. The KILO Toro required what I considered to be a normal amount of touch-ups. The resulting ash was nearly white in color. The ash was firm and came off the cigar in clean chunks. The burn temperature was ideal. I did find this to be a fast burning cigar, but the only negative was it resulted in a decreased smoking time. 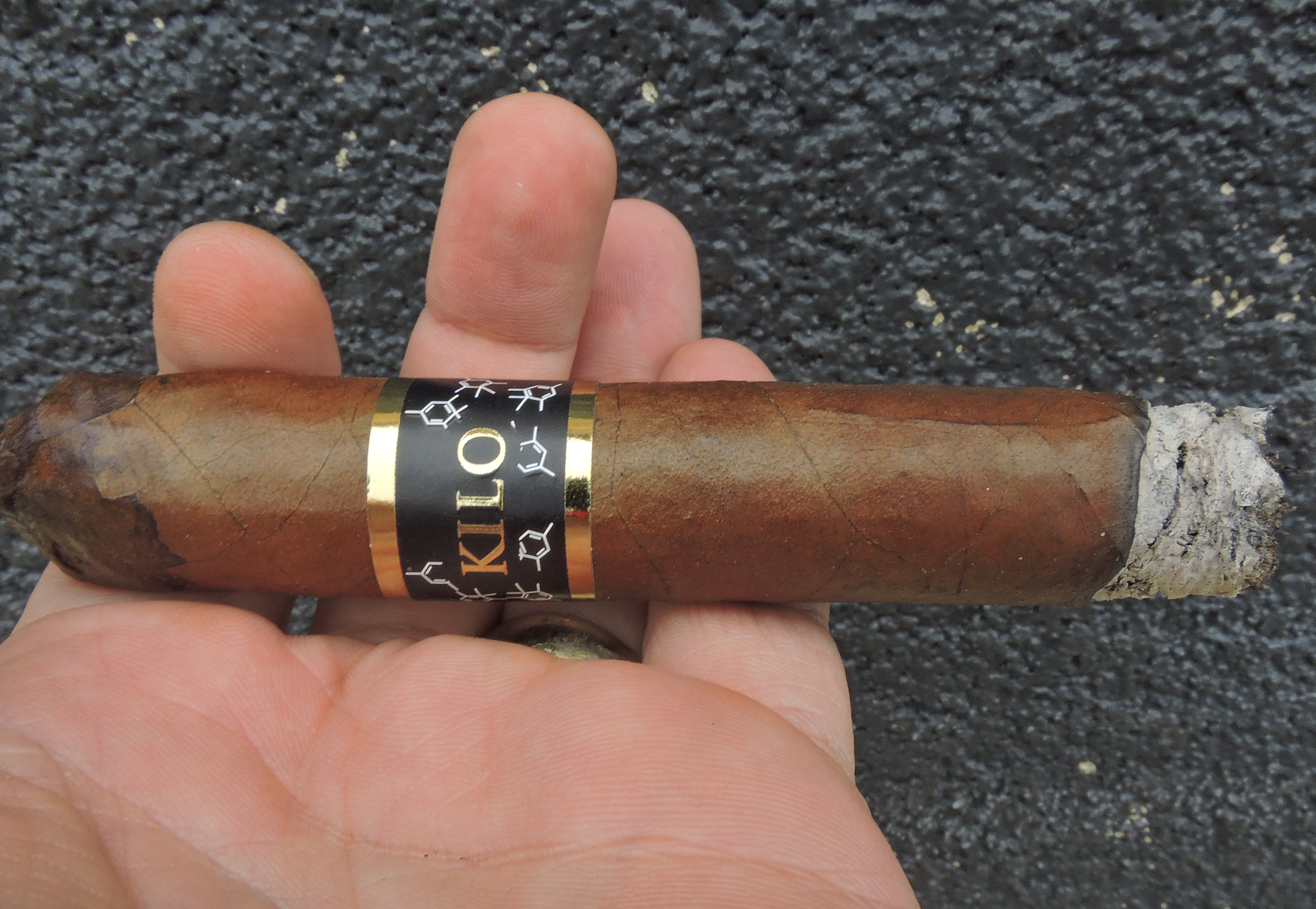 Burn of the KILO Toro

The draw to the KILO Toro was open, but not loose. The KILO definitely produced lots of smoke (which I like). Overall this was an enjoyable cigar to puff on.

The KILO Toro is a powerhouse. This cigar isn’t one where the strength will sneak up on you, you will feel it on the onset. The strength level is full to start and will increase slightly along the way. As for the body, when you factor in the retro-hale, it’s full-bodied. I found the KILO does an excellent job at maintaining a nice balance between strength and body – with neither attribute overpowering the other.

One thing I liked about each of the samples of the KILO Toro I smoked is that this was a cigar that was ready to be smoked. I didn’t find much in the way of youngness on this cigar. Rojas and Stein did a great job at delivering a full strength, full-bodied smoke that does not assault the palate. I’m curious to see wha the long term aging impact of this cigar will be.  I will admit, I did prefer the flavor profile in the first half much better than the flavor profile in the second half. However, the pluses outweigh the minuses here.

This is a very nice addition to the United Cigar portfolio. It’s a cigar I’d recommend to a more seasoned cigar enthusiast who is looking for power and fullness.  As for myself, this is a cigar I’d smoke again. It’s one that I would keep multiples in my humidor.  It’s easily worth a fiver in my book.