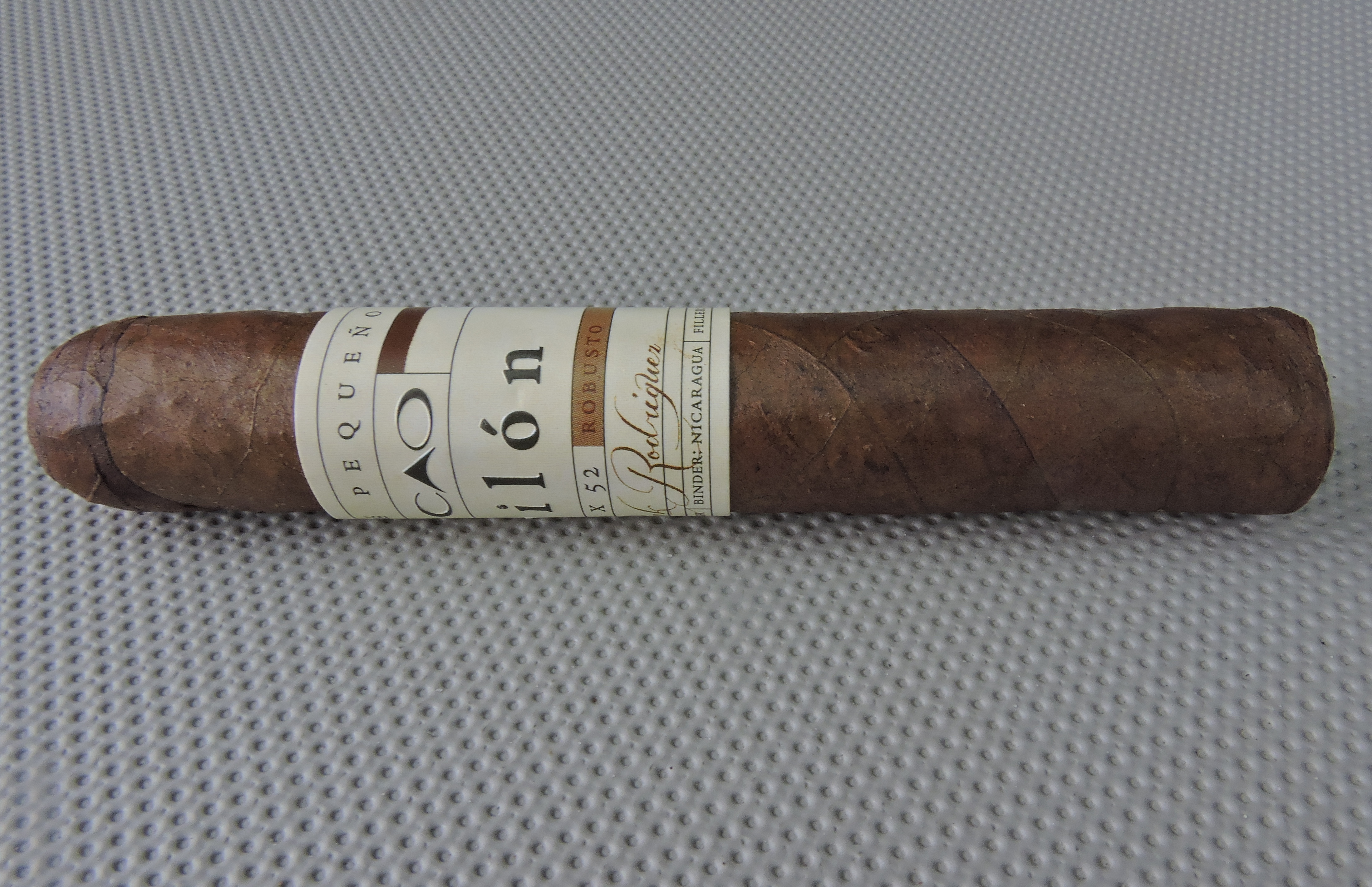 The CAO Pilon was one of three new lines by the CAO brand of General Cigar Company unveiled at the 2015 IPCPR Trade Show. CAO is a brand long known for a reputation of innovation. With the CAO Pilon, it incorporates innovation a little differently – namely it uses an old Cuban fermentation technique that had been popular in the 19th century, but has not been used much in the past fifty years. Most tobacco is fermented by arranging tobacco in large rectangular stacks called pilons. The CAO Pilon is different in that it uses tobacco that is fermented in circular shaped pilons. This technique was eventually abandoned due to being a costly process. CAO Master Blender Rick Rodriguez began experimenting with this fermentation technique about five years ago and was pleased with the results, so he went forward to create a blend which has become the CAO Pilon. Recently I’ve had an opportunity to smoke the CAO Pilon in the Robusto format. Overall I found this to be and excellent cigar that does a great job at bridging classic and contemporary together.

At the 2015 IPCPR Trade Show, CAO explained to us that using the rounded pilons resulted in creating tobacco with better tobacco flavor and aethestics of the tobacco compared to other techniques. As a part of this process, the tobacco is fermented at a lower temperature, thus increasing the fermentation cycle. It is this longer fermentation process combined with the labor needed to arrange the pilons that led to this technique falling out of favor.

Without further ado, let’s take a closer look at the CAO Pilon Robusto and see what this cigar brings to the table.

The CAO Pilon combines an Ecuadorian Habano wrapper with Nicaraguan tobaccos used for the binder and filler.

The CAO Pilon is currently available in three sizes – each packaged in 20 count boxes:

The Ecuadorian Habano wrapper of the CAO Pilon Robusto has a medium brown color to it. One thing that really stands out is that is is a very oily wrapper – one of the oiliest I have seen on a cigar released in 2015. There are some thin visible veins and most of the wrapper seams are well-hidden.

Compared to most CAO releases, the CAO Pilon is less flashy, but no less interesting. The band has a white background. The top of the band has the text “LOTÉ PEQUEÑO” (translates to small lot). Below that is the black CAO logo in a rectangular frame with a brown stripe protruding to the left and right. Sitting on the next row is the text “Pilon” in large black font. On the following row is the text “SIZE” in white font sitting on a brown rectangle, “5 x 52” (the size of the vitola) sitting on a white rectangle and “ROBUSTO” in black font in  brown rectangle. Below that is the Rodriguez’s signature denoted by “CREATED BY RICK RODRIGUEZ” with Rodriguez’s name in brown cursive font. Toward the bottom of the band, the wrapper, filler and binder information is listed with each component surrounding by a rectangular frame.  On the far right of the band is an image denoting a circular pilon.

The packaging does incorporate some CAO / General Cigar innovation. It features a dual panel lid and on one of the panels it tells the story of this project – thus the story it can be seen on the retailer shelves when the cigars are displayed. 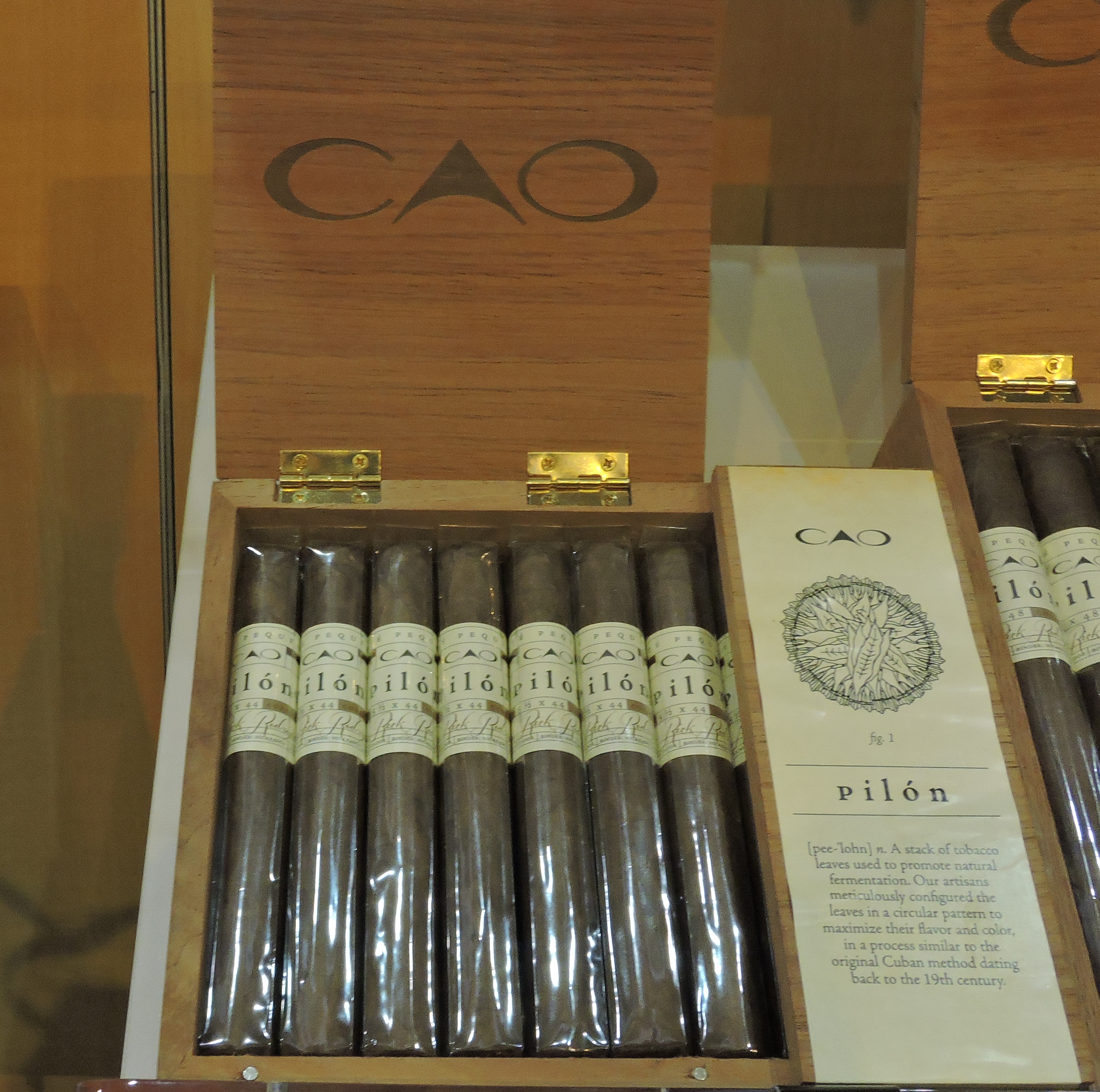 As a normally do, I started the cigar experience of the CAO Pilon Robusto with a straight cut. Once the cap was successfully clipped, I moved on to the pre-light draw. The cold draw of the cigar delivered a mix of nut and sweet natural tobacco. Overall I considered this to be an excellent and flavorful pre-light draw. At this point I was ready to light up my CAO Pilon Robusto and see what the smoking phase would have in store.

The start to the CAO Pilon Robusto picked up right where the pre-light draw left off. I continued to get notes of nut and sweet natural tobacco. These notes were primary notes and were also joined by some cedar notes. There was also a slight red pepper note that I detected in the background. As the CAO Pilon Robusto moved through the first third, I also detected a cream note in the background. Meanwhile, the cedar was quite prominent on the retro-hale.

By the last third, I found the natural tobacco notes to have a slight edge over the cedar. The pepper and nut notes remained secondary. While there was more red pepper during this stage of the cigar, it never became overpowering. By these later stages of the smoke, the cream notes had dissipated. This is the way the cigar experience came to a close. The resulting nub was soft to the touch, but cool in temperature

I found the CAO Pilon Robusto to perform very well when it came to its burn. The burn path remained straight from start to finish. There was a slight curvature with the burn line, but this was cosmetic and was easily remedied with a few touch-ups. Meanwhile, the resulting ash had a salt and pepper color to it. The ash wasn’t overly firm, but it was not a loose or flaky ash. The burn rate and burn temperature were ideal. 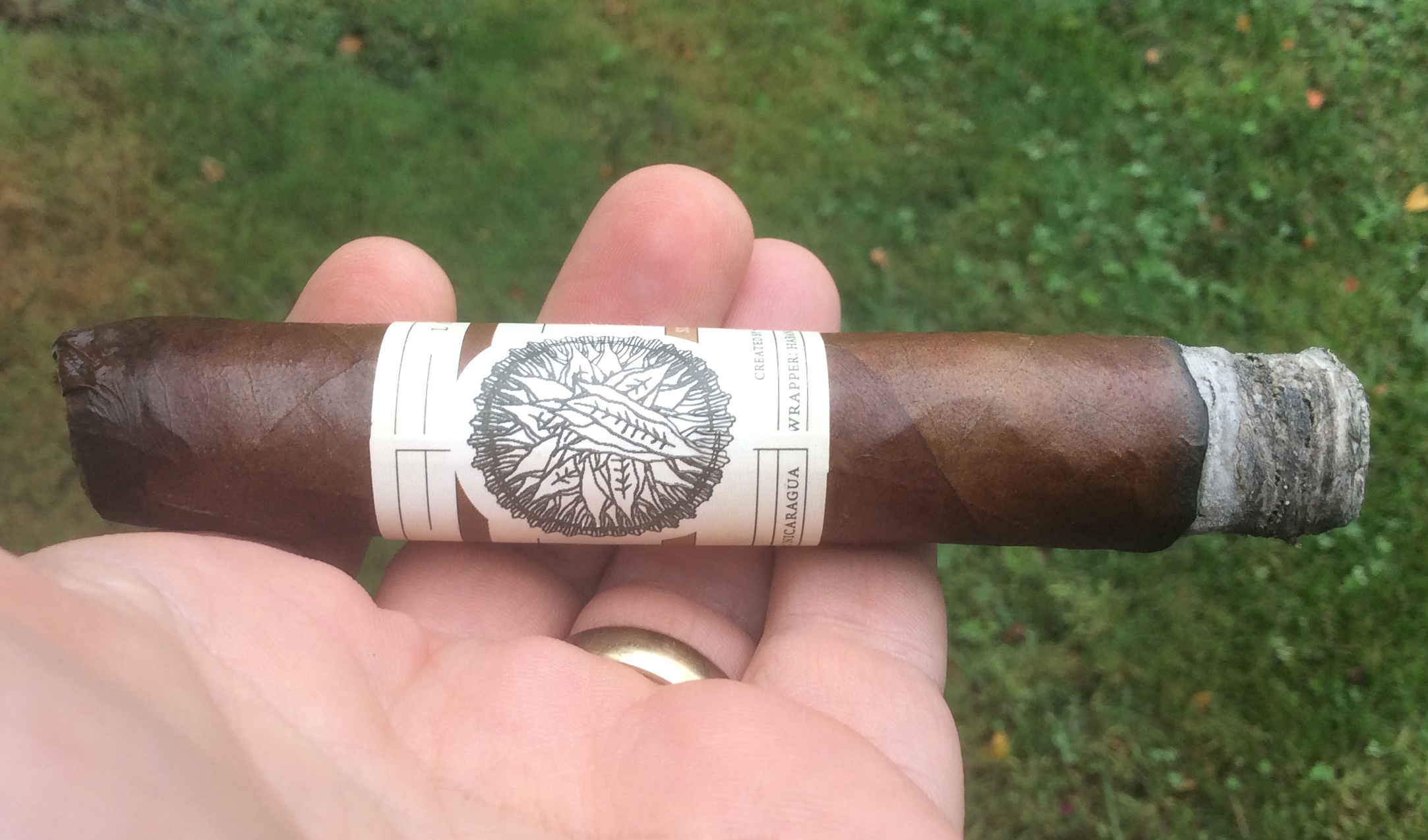 Burn of the CAO Pilon Robusto

The draw was stellar. It had a touch of resistance to it – something I really like. This made the CAO Pilon Robusto a very enjoyable cigar to puff on.

From both a strength and body perspective, I found the CAO Pilon Robusto to be medium.  There was a slight increase in both attributes during the smoking experience, but overall I still felt this cigar was medium strength and medium-bodied when the experience came to a close. In terms of strength versus body, I found both attributes balanced each other nicely with neither overshadowing the other.

The story of this cigar is really intriguing to me. I like the fact that how bringing back an old technique makes for the innovation that this cigar delivers. While I can’t assess what this blend would taste like if it were using tobaccos fermented using traditional rectangular pilons, what I can say is that the final product produced with the circular tobaccos is very good. While this is a medium strength and medium-bodied cigar, this cigar is certainly not one lacking with flavor. Finally, I think this is a cigar that has even more upside with aging. This is a cigar I would easily recommend to a novice or experienced cigar enthusiast. As for myself, this cigar is one I would smoke again – and it’s certainly worthy of a box split.

* General Cigar Company, the parent company of CAO is a sponsor of Cigar Coop and Stogie Geeks.