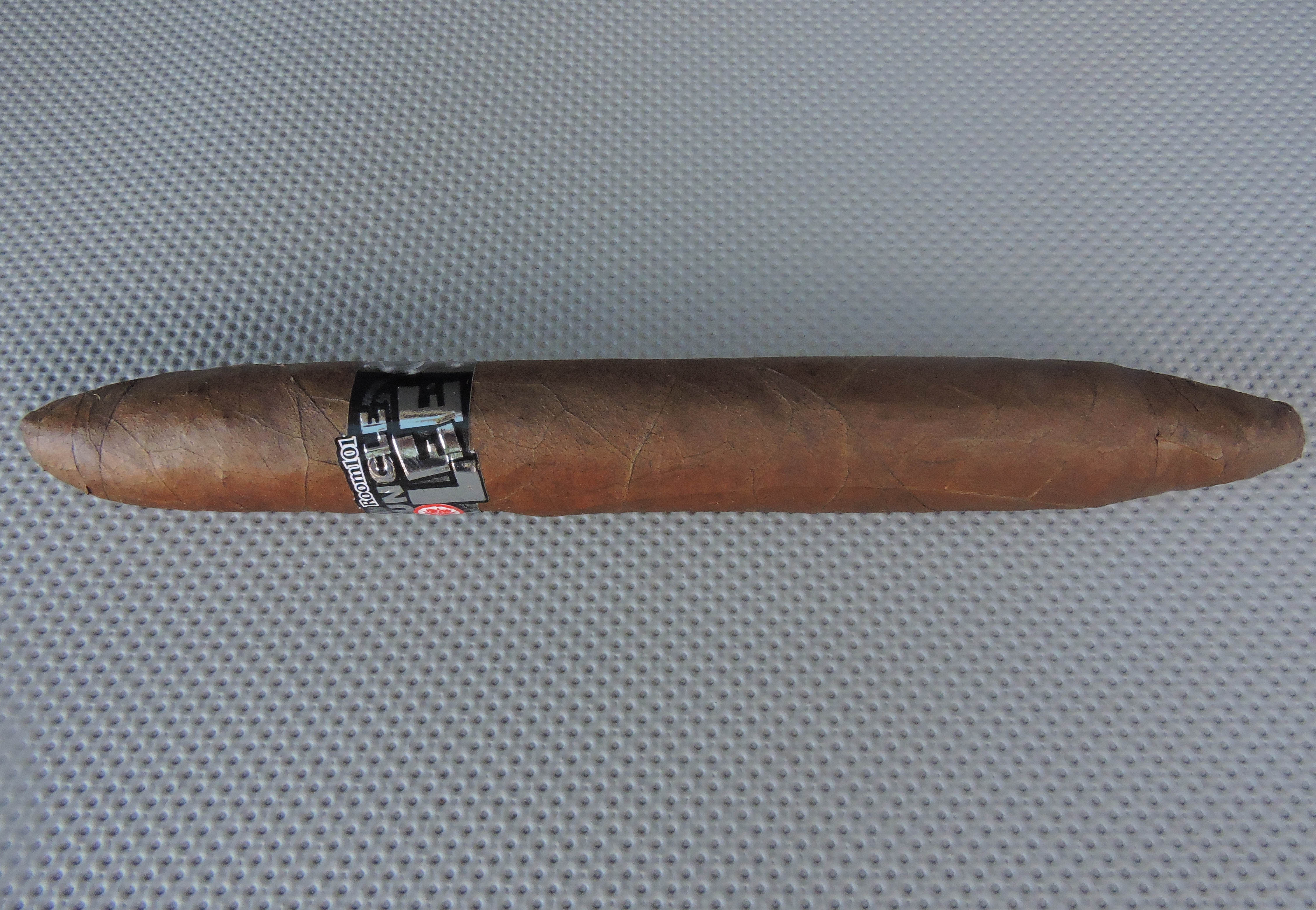 The Room 101 Uncle Lee is a limited production cigar that is a part of Matt Booth’s Room 101 brand done in partnership with Davidoff. The project was intended to be a tribute to Booth’s Uncle (named Lee) who Booth credits to introducing him cigars. Uncle Lee was intended to be released in November, 2014, but was put on hold because of concerns raised about the proposed packaging. By May 2015, some packaging changes were made and the release became national. Recently I’ve had an opportunity to smoke the Room 101 Uncle Lee. Overall I found this to be an enjoyable release by Room 101.

Booth’s Uncle is said to have introduced him to not only cigars, but Bob Marley’s music and “all dimensions of funk”. To capture this, the cigars were packaged in a cartoon-style cereal box. When word got out about the packaging, many were very concerned about the style of this packaging which resembled a cereal box. This resulted in the project quietly being put on hold. Subequently, the cereal box packaging was eliminated and a wooden varnish box containing the image of Booth’s Uncle was used. Late last year, a gradual soft launch was done to select retailers, starting with Stogies World Class cigars in Houston, Texas. By May, 2014, Uncle Lee was officially made available nationwide. 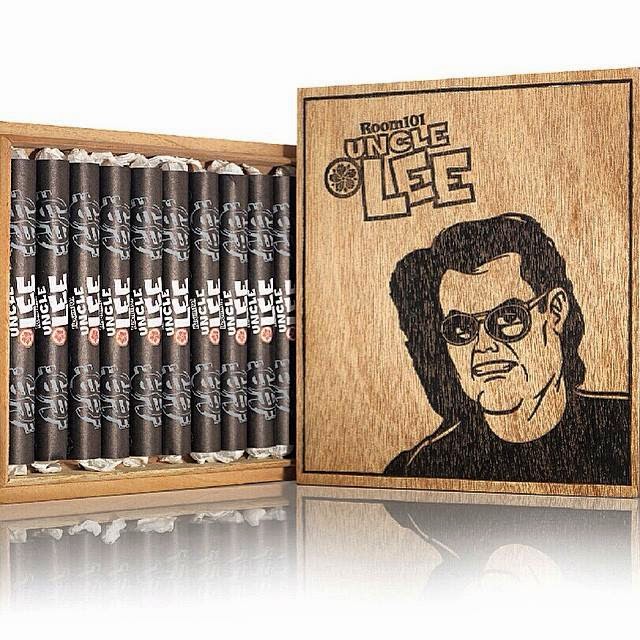 Without further ado, let’s take a closer look at the Room 101 Uncle Lee and see what this cigar brings to the table.

The Room 101 Uncle Lee is a four country multinational blend. It is highlighted by a dark Ecuadorian Habano wrapper. Corojo from Nicaragua is used for the binder while Corojo from Honduras is combined with Dominican Piloto Cubano for the filler.

Uncle Lee is available in one size – a Ranfla, a perfecto measuring 6 1/2 x 30 x 50 x 19. The Ranfla is a size that was originally introduced with the Namakubi Ecuador. The cigars are packaged in ten count boxes with a total production of 5,000 boxes (50,000 cigars).

The Room 101 Uncle Lee follows a similar packaging design that was introduced with the Namakubi Ecuador. The cigar itself is wrapped in tissue paper. There is a black colored paper sleeve surrounding the tissue paper. The text “Room 101” is on the sleeve in black retro-styled font with white trim. In large white retro font is the text “UNCLE LEE”.  There is a red and white Room 101 Cherry Blossom (seen on other Room 101 packaging) to the left of the text. There are also large green and black dollar signs on the sleeve. 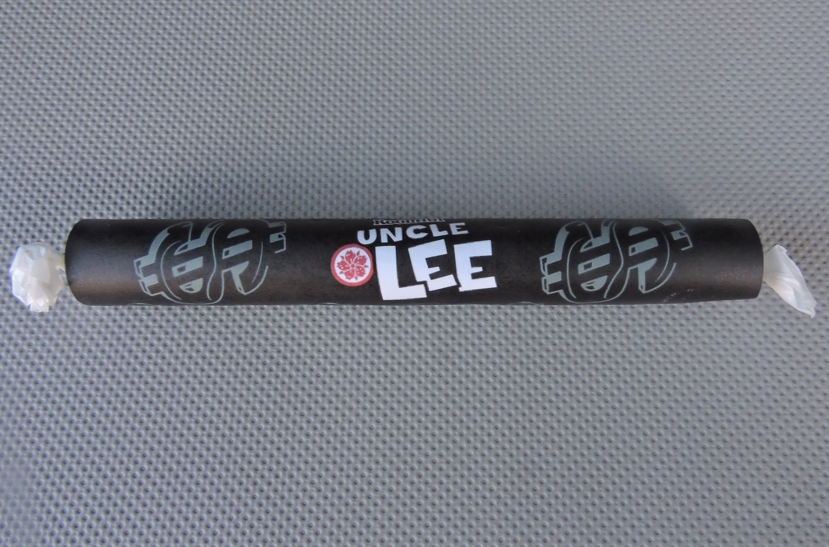 Once the sleeve and tissue paper are removed it reveals a dark chocolate brown Ecuadorian Habano wrapper. There is a light coating of oil on the wrapper. There are some visible thin veins, but the wrapper’s dark color does a good job at hiding the seams. The foot of the Ranfla vitola has more of a nozzle shape on the foot while the cigar is tapered by the cap. The cigar itself also has a very strong cedar aroma.

The band also has a black background. On the front of the band is the text “UNCLE LEE” in a large retro-styled chrome font. To the immediate left of that text is a red Room 101 cherry blossom. Above that same text is the text “Room 101” in retro black font with white trim. To the left of the cherry blossom is an image of Matt Booth and to the right of the “UNCLE LEE” text is a dollar sign, and further to the right is an image of Booth’s uncle. On the far left of the band is the text “100” in red font with white trim. Just below that text is the text “Muzzle Loading” in white font.

On a side note, this is the second Room 101 cigar to have Booth’s image on it. For the Room 101 Big Delicious – a shop exclusive for Smoke Inn, Booth’s image is also on the cigar.

Prior to lighting up the Room 101 Uncle Lee, I went with a straight cut. As I have being doing with all of my figurados and perfectos, I used my Credo Special T cutter with the 36 ring gauge hole to get an ideal cut for this perfecto. Once the cap was removed, I moved on to the pre-light draw phase. The cold draw delivered notes of chocolate, cedar, and natural tobacco. Overall I considered this to be a solid pre-light draw. At this point I was ready to light up the Uncle Lee and see what the cigar experience would bring forward.

The Room 101 Uncle Lee picked up right where the pre-light draw left off as I detected notes of cedar, chocolate, and natural tobacco. The cedar notes went primary early on while the chocolate and natural tobacco became background notes. Some citrus notes also emerged in the background. Meanwhile I also detected black pepper on the retro-hale.

As the Room 101 Uncle Lee moved through the first half, I found the chocolate notes got smoother and increased in intensity. I also noticed the citrus notes increased as well. By the early stages of the second third, I found the chocolate was now a primary note with the cedar, natural tobacco, and citrus close secondary notes. I also detected a slight amount of pepper on the tongue as a result of the after-draw.

By the midway point, the citrus and natural tobacco notes were in the forefront and fused quite nicely together. I still found the chocolate notes made an occasional appearance in the forefront, but remained mostly a secondary note with the cedar. The pepper was now more prominent in the background.

The last third still saw the citrus and natural tobacco in control. The chocolate, cedar, and pepper all remained in the background. This is the way the Uncle Lee came to a close. The resulting nub was slightly warm in temperature and soft to the touch.

While the Room 101 Uncle Lee had a straight burn path, there was some irregularity on the burn line. This was remedied easily with some touch-ups. Meanwhile, the resulting ash had a silvery gray color. I found the ash itself to be on the firm side. The burn rate was ideal. Overall I would consider the burn temperature ideal – except at the very end when the cigar hit the nub.

Burn of the Room 101 Uncle Lee

The draw was outstanding. There are many times I’m usually not a fan of perfectos because it can deliver an inferior draw. This was not the case with the Room 101 Uncle Lee. This cigar’s draw also offers up a slight amount of resistance -which is something that I like.

Even with the revamped packaging, some might argue that the Uncle Lee is a gimmicky cigar. However, once this cigar it lit up, it is quite clear this is not the case. This is a cigar that delivers some very good flavors and offers up some nice complexity. The complexity of this cigar gives this cigar a contemporary twist while the flavor profile is a more traditional one. The end result is that the Uncle Lee is a very good cigar. Given this is a stronger and fuller smoke, it’s one I would recommend to a more seasoned cigar enthusiast. As for myself, this is a cigar I would definitely smoke again.  It’s worthy of a box split.