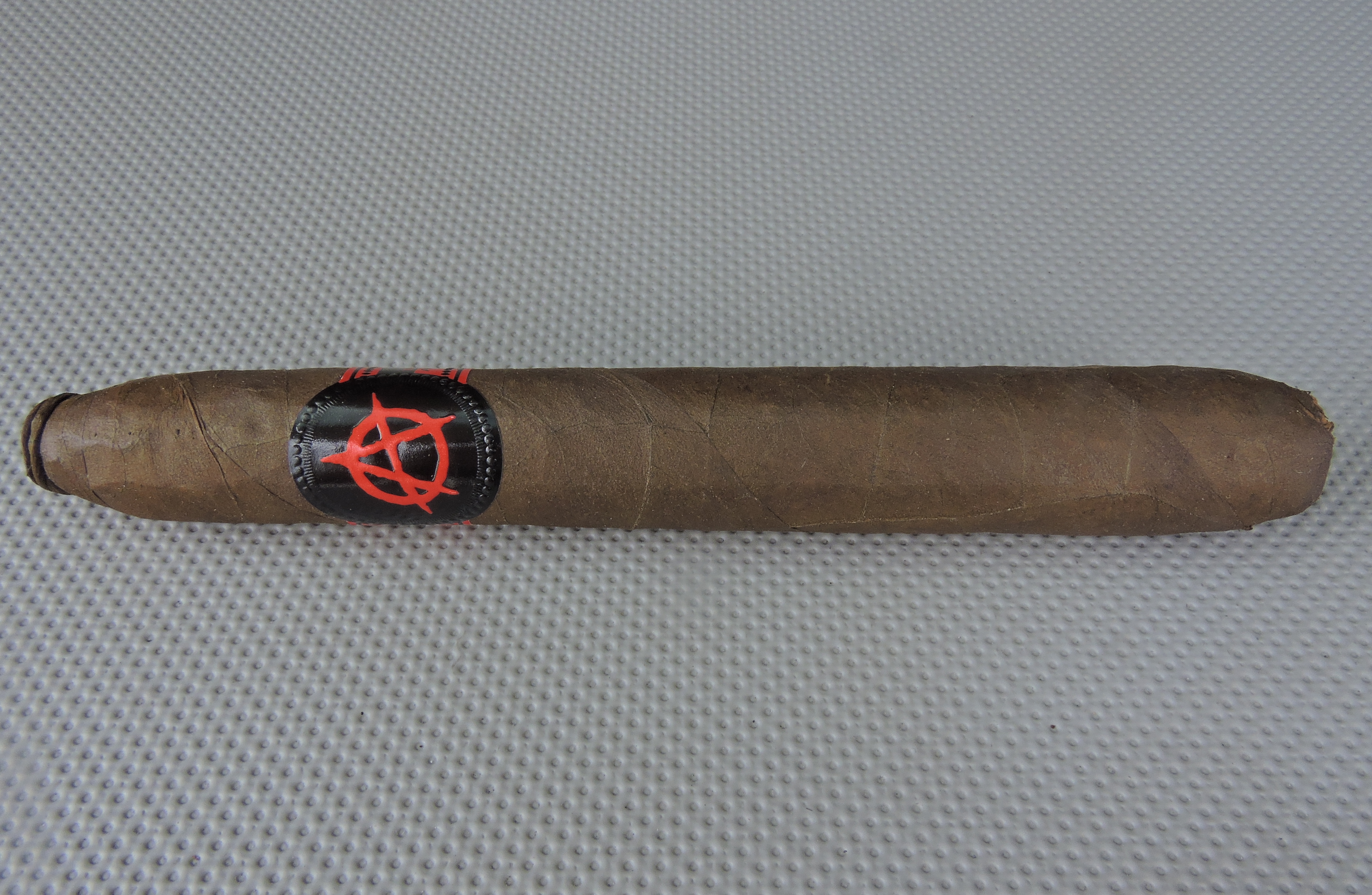 In 2010, South Florida Retailer Smoke Inn would launch the a cigar called the Tatuaje Anarchy. This was the first release of a project called the MicroBlend Series. The concept behind this series involves Smoke Inn teaming up with some of the biggest names in the cigar industry to produce a a one-time limited run exclusive for its stores. The Anarchy became an overwhelming success and is considered one of the top shop exclusives ever released in the industry. In fact, the cigar placed as the Cigar Coop #3 Cigar of the Year in 2011. While the MicroBlend Series was originally only intended to have four installments, the series has now grown to eleven. For this eleventh installment, Smoke Inn has decided to reach back into its past and do another run of the Tatuaje Anarchy. Recently I’ve had an opportunity to smoke the Tatuaje Anarchy 2015. Overall, I found the Tatuaje Anarchy 2015 to be an excellent cigar keeping to the high level of excellence that has been seen in this series.

The eleven installments of the Smoke Inn MicroBlend series are (in chronological order) are:

There are plans for a sampler consisting of ten blends released in the MicroBlend series to be released late in 2015 or early in 2016. At press time, it has not been announced if the sampler will have an Anarchy 2011 or Anarchy 2015.

Even after there had been eleven blends released in the series, many still looked for that original Tatuaje Anarchy to make a comeback. According to Smoke Inn, much of the reason why it had not been brought back was because of the availability of the tobaccos. For this blend, Smoke Inn says it uses same tobaccos as the original.

Without further ado, let’s take a closer look at Tatuaje Anarchy 2015 and see what this cigar brings to the table.

The Ecuadorian Habano wrapper of the Tatuaje Anarchy 2015 has a chocolate brown color. There is a light coat of oil on the wrapper. There are also some visible veins and some visible wrapper seams. The wrapper has a slight amount of bumpiness on the surface. The widest point of the cigar is closer to the foot and there is a sharper tapering toward the foot. The footer itself is open. The tapering is also gentle toward the cap and the cigar is finished with a cinnamon bun pig-tail.

The band to the Tatuaje Anarchy 2015 is slightly different than the original. The band features a red anarchy symbol on a black background. The anarchy symbol is larger than the original and this time sits on a large circular background with a “rivet-like” design surrounding it. Another difference is that there is red and black striping going around the band. On each side, the text “TATUAJE” is in red font sitting on a black stripe. Just below that text, is the text “ANARCHY” in black font on a black stripe. On the far right of the band is a white Tatuaje tattoo logo. 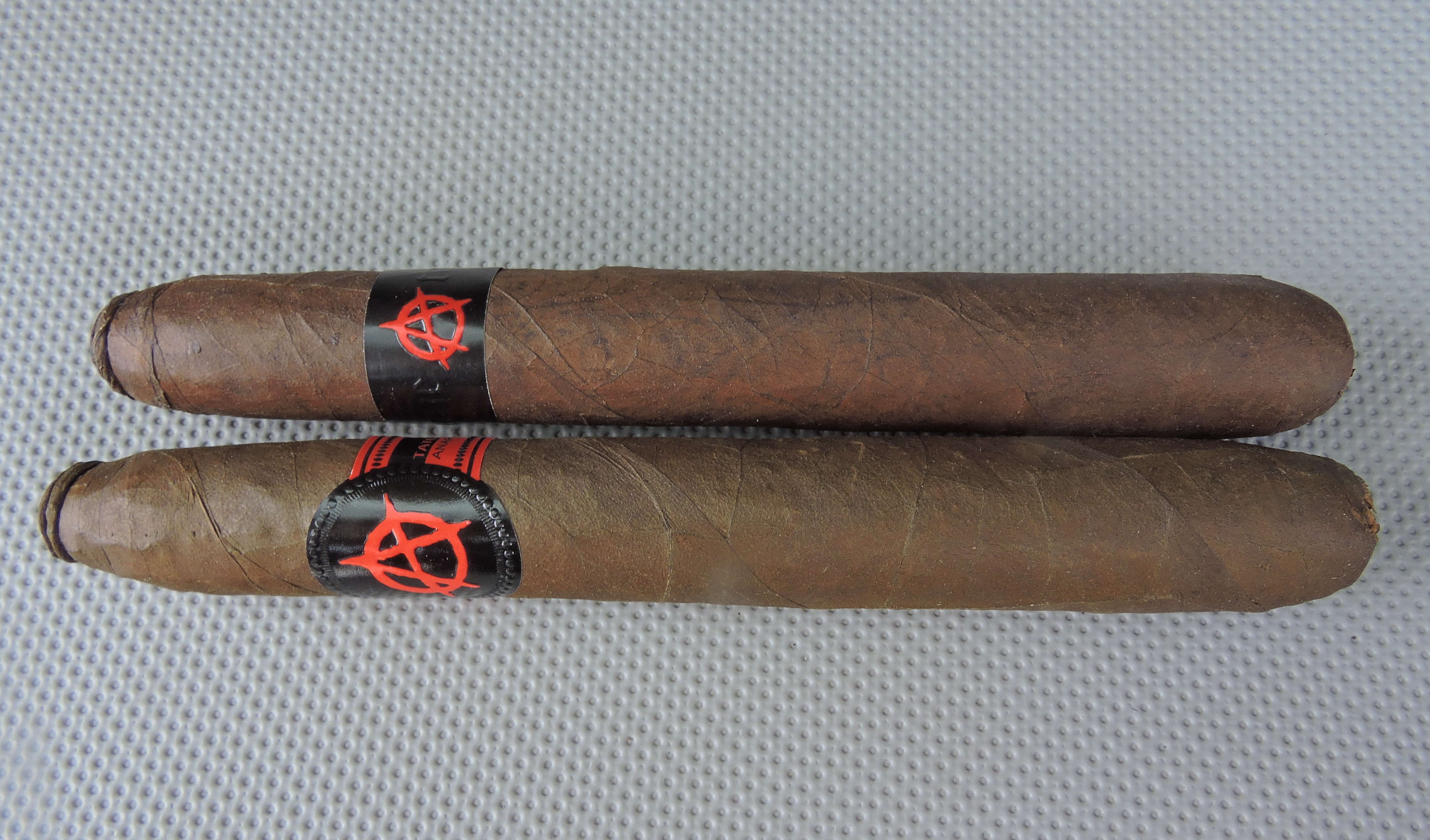 As opposed to pulling off the cinnamon bun-shaped pig-tail cap of the Tatuaje Anarchy 2015, I went with a straight cut that removed both the cap and pig-tail. To accomplish this, I opted to use my Credo Special T cutter using the 36 ring gauge hole to get an ideal cut for this salomon. Once the cap and tail were removed, I moved on to the pre-light draw stage. The dry draw provided a mix of leather, cocoa, and a slight black pepper spice. Overall I considered this to be a very good pre-light draw. At this point I was ready to light up the Tatuaje Anarchy 2015 and see what the smoking phase would have in store.

The flavor profile I derived from this cigar was definitely in the same wheelhouse as the original Tatuaje Anarchy, yet the Tatuaje Anarchy 2015 delivers its very own story. The start to the Anarchy 2015 had a mix of earth, cocoa, black pepper, and a natural tobacco sweetness. The black pepper was also quite prominent on the retro-hale, but it was not an overpowering spice.

During the first third, notes of mocha (a combination of coffee and cocoa) surfaced in the forefront. Meanwhile the notes pepper and earth were in the background. The natural tobacco sweetness in the background took on a raw sugar cane quality. The mocha and sugar cane brought back a lot of memories of the original Tatuaje Anarchy.

By the last third, I found the earth notes to remain primary with the pepper a close secondary note. Much of the mocha notes had diminished. During this stage, the sugar cane like sweetness returned to more of a natural tobacco note. This is the way the flavor profile held until the end. The resulting nub was firm to the touch and cool in temperature.

The Tatuaje Anarchy 2015 is a well-constructed cigar and this is reflected in the burn and draw. Overall I found the Anarchy 2015 to maintain a straight burn path. The cigar never was in danger of tunneling or canoeing. The burn line was slightly jagged and did not require an excessive amount of touch-ups. The ash was a light gray color. I found the ash to be firm, coming off the cigar in clean chunks. There was some minor flaking along the way, but this didn’t prove to be a nuisance. The burn temperature was ideal. I found the burn rate to be a little slower than I expected, but this had no adverse effects not he smoking experience. 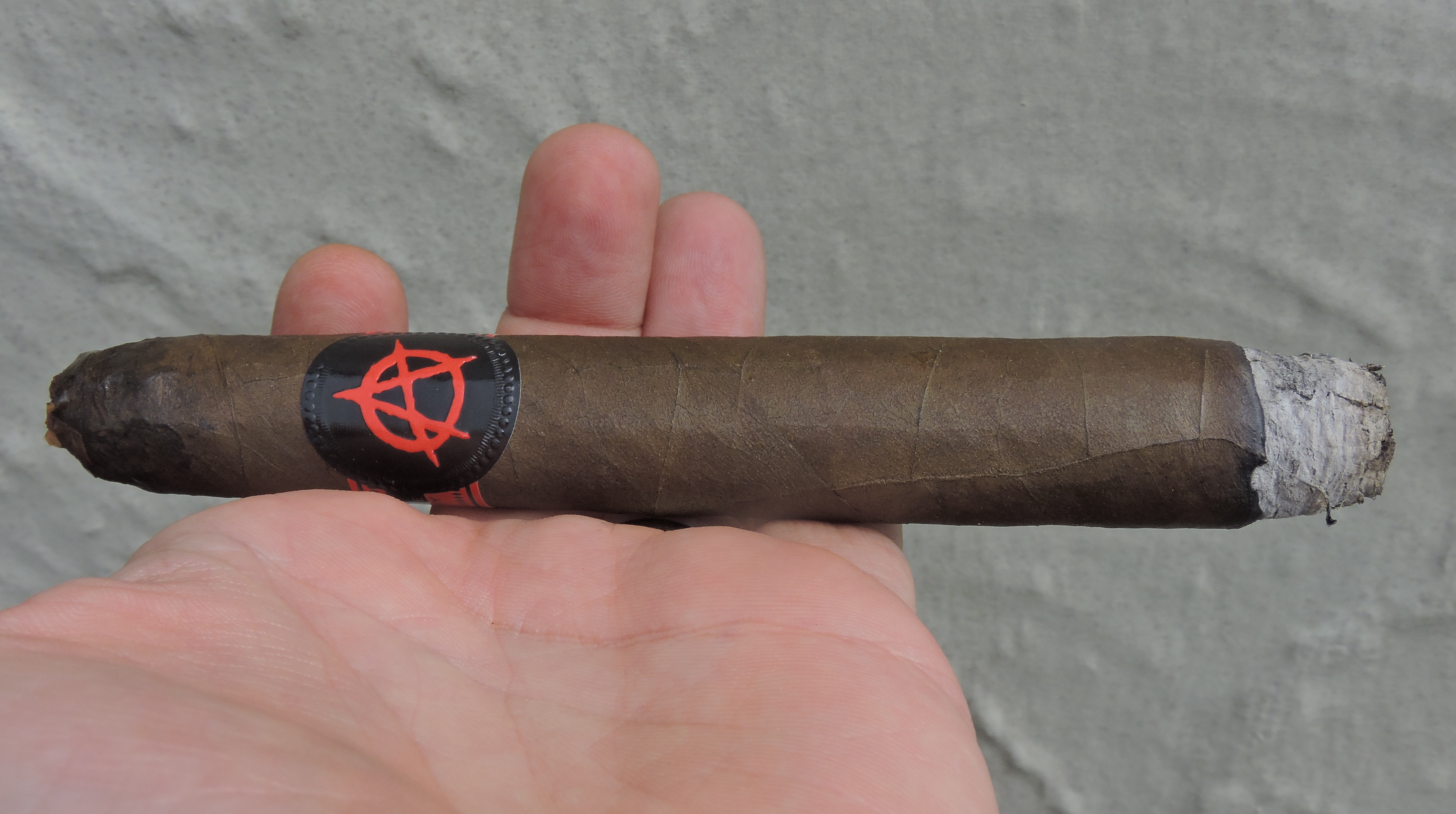 Burn of the Tatuaje Anarchy 2015

This draw to this salomon was also very good. I would describe this as being on the open, but not loose side. This made the Tatuaje Anarchy 2015 an enjoyable cigar to smoke.

Overall I found this to be a cigar that had some boldness, but it was not a cigar that would overpower you. I assessed the Tatuaje Anarchy 2015 as being medium to full in both strength and body. Even though I assessed both of these attributes as medium to full, when it came to strength versus body, I gave the body a slight edge. I also found the Anarchy 2015 to be slightly dialed back from the original Anarchy – but not by much.

Anarchy 2011 vs. Anarchy 2015? This might sound like an easy way out, but there is really no fair way to do this. The original Anarchy was an outstanding cigar. It got better over a period of 18 to 24 months in my humidor.  However, it is also a cigar that did lose some of its epic qualities after 24 to 36 months. With the Anarchy 2015, it still is to be determined how it performs with some longer term aging. To smoke an Anarchy 2011 and a Anarchy 2015 back to back won’t work because of the aging parameter. What I can say, the Anarchy 2015 is a very good cigar that keeps to the excellent standards of the MicroBlend series and profile of the original. Whether it reaches what the Anarchy 2011 became is still an unknown.

In a way, I think the shop exclusive cigar market has “jumped the shark” and has gotten quite diluted with all of the releases. I think the “chase” for many of these cigars has also slowed down. Both Tatuaje and Smoke Inn have been leaders in the shop exclusive market for a long time – and they have another outstanding release with the Anarchy 2015. This is a cigar I’d probably steer to a more seasoned cigar enthusiast, but wouldn’t discourage a novice from trying. As for myself, it’s a box worthy cigar – and one I look forward to smoking again.