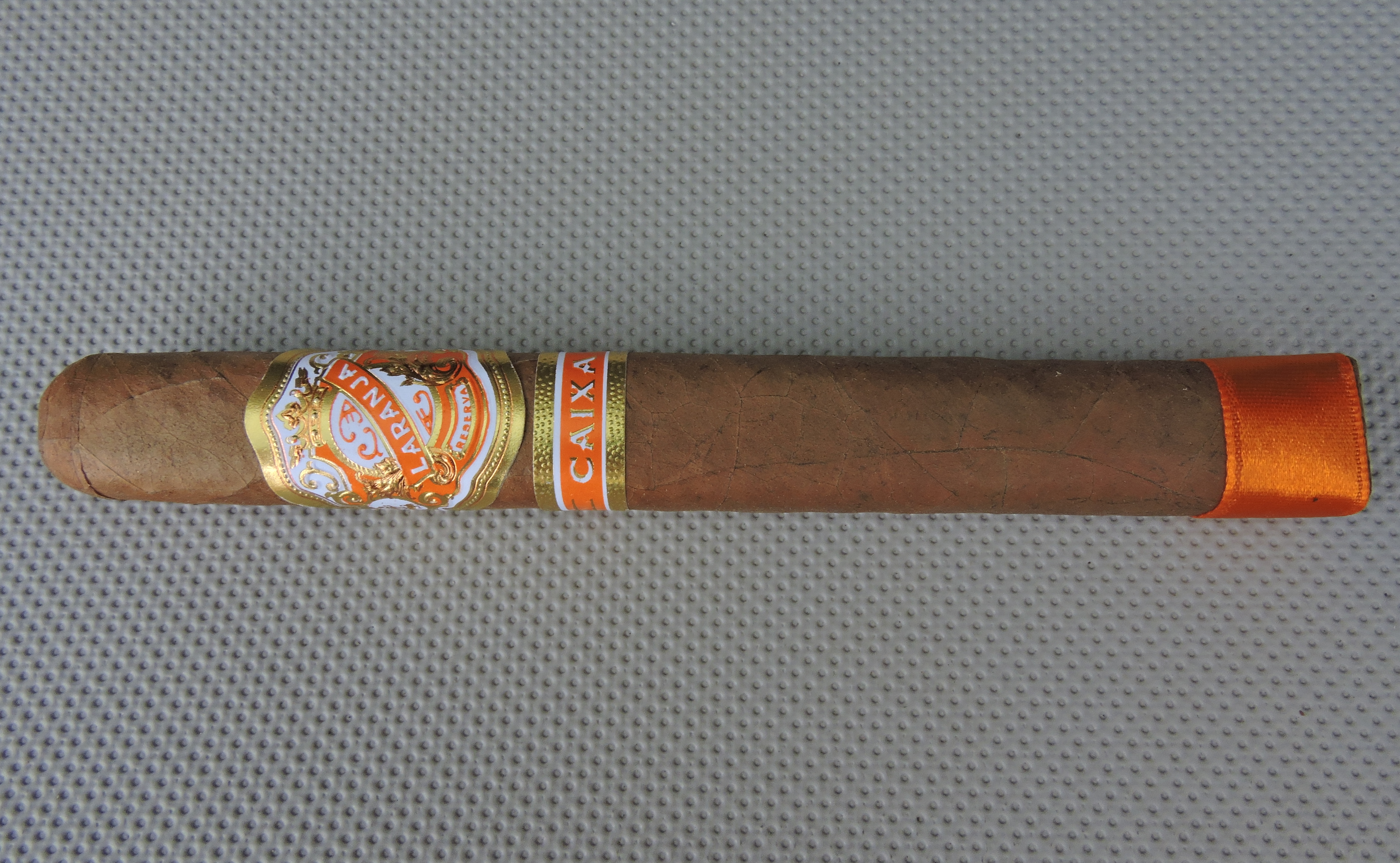 In the original announcement for the Espinosa Laranja Reserva, company founder Erik Espinosa gave some context for this project:

“I wanted to release something different for the show, we had started working with this orange Brazilian Laranja wrapper last year and we are very excited with the end result. I have always liked the color orange (laranja which is the Portuguese word for orange) and the positive energy associated with that color. It is the color of enthusiasm, creativity, determination and success, that’s what we are all about here.”

Without further ado, let’s take a closer look at the Espinosa Laranja Reserva Caixa and see what this cigar brings to the table:

The wrapper is called Brazilian Laranja. This is a wrapper that comes from the Recôncavo region of Brazil located in the Bahia State. The cigar itself is made at Espinosa’s La Zona factory located in Esteli, Nicaragua.

The Caixa is the fourth size in the Espinosa Laranja Reserva line. Consistent with the rest of the line, the Caixa is packaged in 20 count boxes.

As mentioned the wrapper of the Laranja Reserva has a orange tint to it. This orange tint combined with a medium brown color provides a unique presentation of the wrapper. The wrapper itself has a light coating of oil. There are some very thin visible veins, but overall the wrapper seams are well hidden.

The Caixa differs from the rest of the Laranja Reserva line in that it has two bands. The primary band is the same as what is found on the rest of the Laranja line featuring an orange, white and gold color scheme. The design of the band resembles a shield with a gold crown on it. There is an orange ribbon design going across the shield diagonally with the text “LARANJA” in white font. On the lower part of the band, here is a white wedge-design with the text “RESERVA” in small white font. There are also adornments reminiscent of the La Zona and Espinosa logos to the left and right.

The secondary band features a thick orange stripe with surrounded by a white stripe above and below it. There is also gold trim across the top and bottom of the band. The text “CAIXA” is in white font surrounded by two gold pinstripes to the left and right.

The footer of the cigar is finished with an orange ribbon.

Prior to lighting up the Caixa, I went with a straight cut to remove the cap of the cigar. Once the cap was successfully clipped I moved on to the pre-light draw phase. The cold draw delivered notes of caramel, natural tobacco sweetness, and a touch of orange peel. Overall I considered the pre-light draw to the Caixa to be excellent. At this point I removed the ribbon from the footer, lit up the Caixa and moved on to the smoking phase.

When I assessed the original Espinosa Laranja Reserva Corona Gorda, I noted that I got an orange flavored note. I also noted that it might be the power of suggestion with the “orange” associated with the cigar that influenced whether I got that note. Perhaps this time it was the opposite effect at play as I did not detect an orange flavor this time around.

Later in the first third, I found the natural tobacco notes took control as the primary note. The fruit sweetness started to float in and out of the forefront. Meanwhile, the caramel and cedar notes were secondary. There also was a leather note present in the background.

Close to the midway point, a nut flavor also surfaced in the forefront with the natural tobacco. The fruit notes were now grounded as a secondary note along with the cedar and leather. I also picked up a little red pepper on the tongue.

By the last third, I found the primary notes became more woody. The cedar notes increased during this stage of the smoke. There also was a little more red pepper in the background. The fruit notes were still in the background and I found the caramel and leather notes were now very subtle. I did find the final stages of the Caixa to be on the spicy side. This is the way the flavor profile held until the end. The resulting nub was soft to the touch, but cool in temperature.

Overall I found the burn to perform very well on the Caixa. The burn path remained straight from start to finish. The burn line itself was slightly jagged along the way, but in most cases it wasn’t enough to warrant a touch-up. The resulting ash was a silver gray color. It wasn’t the firmest ash, but it wasn’t a loose or flaky ash. The combustion performed quite well as the cigar maintained an ideal burn rate and ideal burn temperature throughout the smoking experience.

The draw to the Caixa performed quite well. I categorized the draw as an open draw – not too loose, nor too tight. Usually I like a little more open-ness on a box-press than a parejo, so I considered this to be ideal. Overall this was a low maintenance cigar to puff on.

In terms of strength and body, I found the Caixa slightly bolder for both of these attributes. The Caixa delivered a medium to full strength cigar from start to finish. I didn’t get much in terms of variance when it came to strength. As for the body, I found the Caixa to be full-bodied right out of the gate. Along the way, I did find the body increased along the way. There was a nice amount of weight on the palate when it came to the flavors of this cigar.

When looking at strength versus body, I found the body to have a comfortable edge throughout the smoking experience.

Espinosa Cigars has a lot to be proud of when it comes to the Espinosa Laranja Reserva offering, and the Caixa continues what is a great story around this line. When it comes to box-pressing, it can change a cigar experience quite a bit. What I liked about the Caixa is how it is a different cigar, yet keeps true to what the Laranja Reserva line is all about. This is a cigar with great flavor, great construction, and a nice amount of complexity.

This is a cigar I probably would steer to a more seasoned cigar enthusiast and it does have some boldness to it.  As for myself, this is a cigar that we call “Belle of the Ball” – namely the best size vitola in the line. It’s a cigar I’d smoke again – and it’s certainly worthy of being a box worthy cigar.