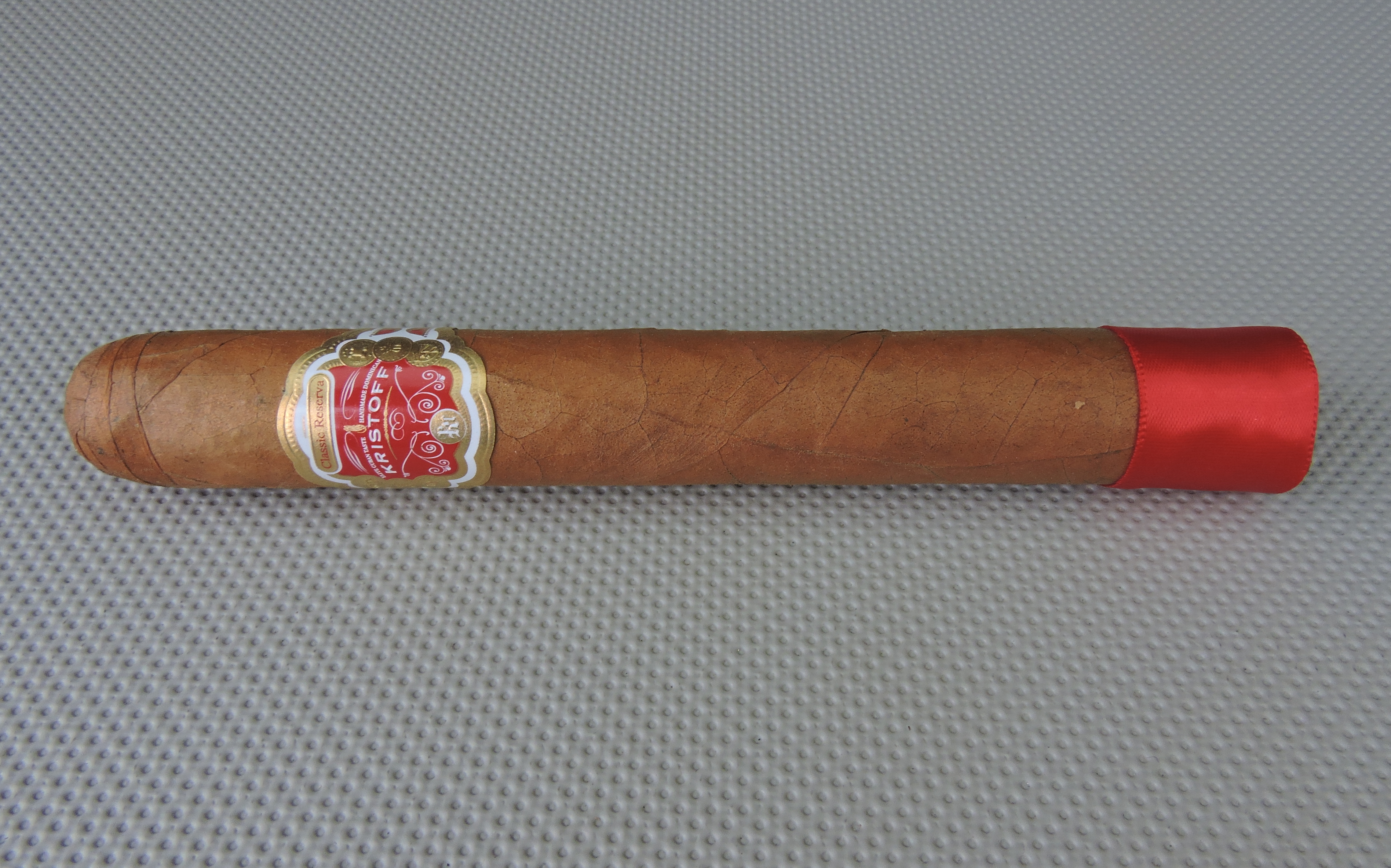 When the Galerones Series was released in 2013 in addition to collaborating with a different factory (PDR Cigars) and using different tobaccos, it marked a big change in direction for Kristoff in terms of packaging.  The Galerones moved away from Kristoff’s signature rustic-styled packaging and banding to more sleek and glossy style packaging. The Kristoff Classic Reserva follows in the path of Galerones as it not only comes out of PDR Cigars, but it also features the sleek and glossy packaging and banding. 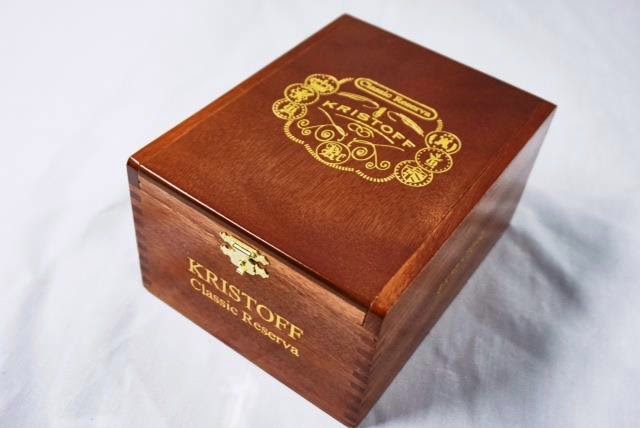 The Kristoff Classic Reserva has a total production of 1,000 boxes per size. 200 boxes offered to retailers who are members of the TAA. While it was released to the TAA first, the cigar was not part of the 2015 TAA Exclusive Series.

Without further ado, let’s take a closer look at the Kristoff Classic Reserva in the Toro format and see what this cigar brings to the table.

The Kristoff Classic Reserva features a multi-national blend with tobaccos from four countries.

There are three sizes of the Kristoff Classic Reserva.  Each of the three sizes are packaged in 20 count boxes.  As mentioned above, a total of 1,000 boxes per size were released.

The Ecuadorian Habano wrapper of the Kristoff Classic Reserva has medium “brown bag” colored wrapper. Depending on how the light shines on it, there may be a slight cinnamon tint to the wrapper color. There is also a light coating of oil on the surface of the wrapper.  There are some visible wrapper seams and the visible wrapper veins are quite thin.

The band features a red, gold, and white color scheme. The text “KRISTOFF” sits on a red background in the classic Kristoff logo font. Above the “KRISTOFF” text is the text “ELITE CUBAN TASTE” and “HANDMADE DOMINICAN” in small white font. Above the red background is a gold plate design with the text “Classic Reserva” in red font. There are three gold medallions to the left and right of the background. Toward the bottom of the red background is a gold medallion with the Kristoff initial in a classic white font. The remainder of the band has white adornments on the red field. There is gold and white trim surrounding the edges of the band.

Prior to lighting the Kristoff Classic Reserva Toro, I went with a straight cut to remove the cap. Once the cap was successfully clipped, I moved on to the pre-light draw. The cold draw provided a mix of caramel and floral notes. These notes were neither sweet nor overpowering. Overall, I was quite pleased with the pre-light draw.  At this point I was ready to light up the Classic Reserva and see what the smoking phase would have in store.

The start to the Kristoff Classic Reserva Toro delivered a mix of natural tobacco and caramel notes in the forefront. There also were some subtle red pepper and floral notes in the background. I also detected the red pepper on the retro-hale, but it was not an overpowering spice.

As the Classic Reserva moved through the early stages, the caramel and natural tobacco notes remained in the forefront. Occasionally I picked up a slight graham cracker note – particularly in the first third. Later in the first third, I picked up some rich creamy notes in the background that added to the smoothness. Meanwhile the floral notes had pretty much dissipated. This flavor profile continued through the second third.

By the last third, I found the red pepper joined the caramel and natural tobacco notes in the forefront. There still was a creamy element toward the end and it kept the cigar smoking smooth toward the end. This is the way the cigar experience came to a close. The resulting nub was firm to the touch and cool in temperature.

From a burn perspective, I found the Kristoff Classic Reserva Toro to have a straight burn from start to finish. The cigar was never in danger of tunneling or canoeing. The burn line had a slight amount of jaggedness, but this was cosmetic and was easily remedied with a touch-up. The resulting ash had a salt and pepper color. This wasn’t an overly firm ash and there were a few times the ash flowered a bit, but this didn’t prove to be a flaky ash. The burn rate and burn temperature were ideal. 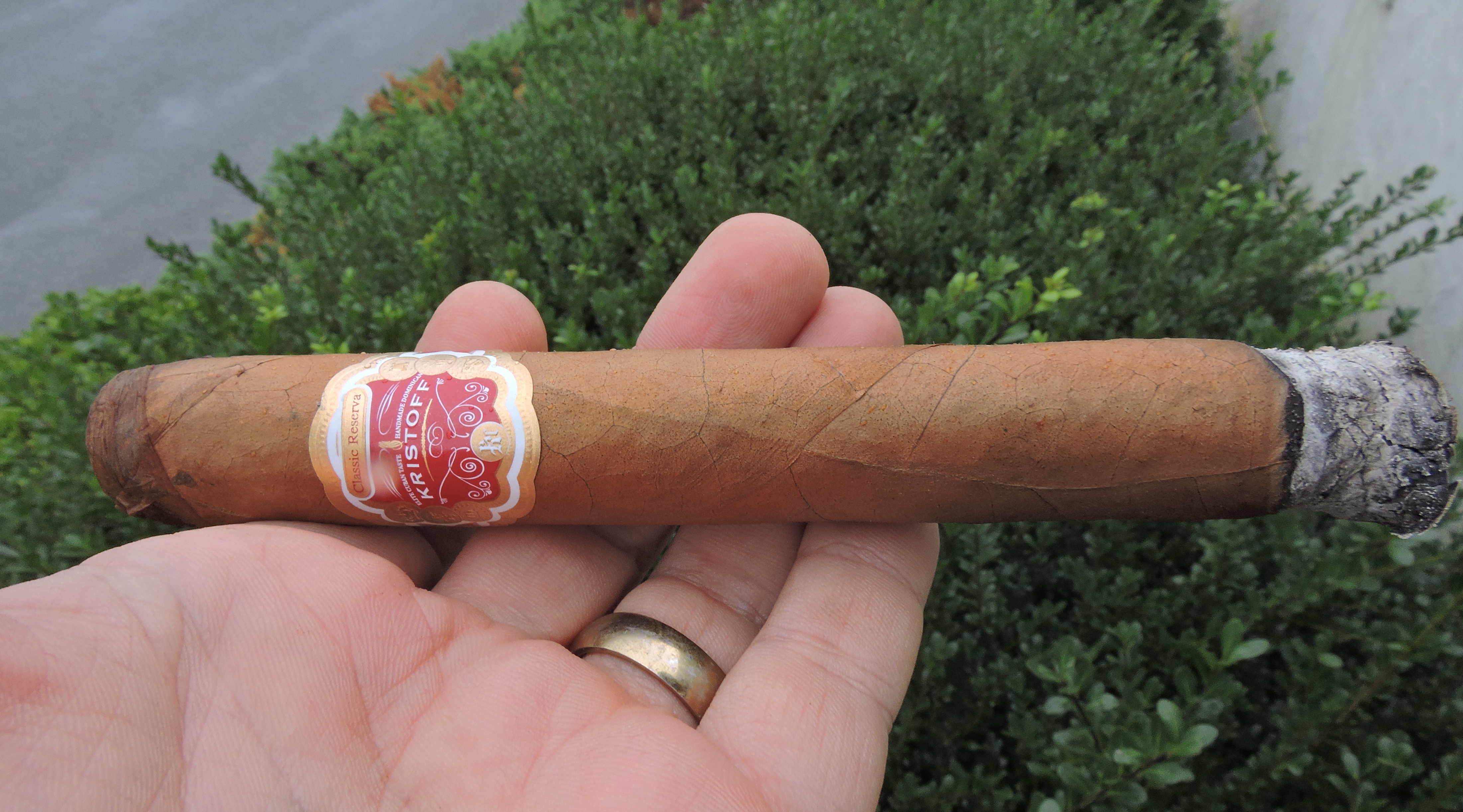 The draw performed quite well on the Kristoff Classic Reserva Toro. The draw was neither tight nor loose. This was a low maintenance draw that made this a very enjoyable smoking experience.

Overall I found this to be a really good cigar. While there weren’t a lot of radical flavor transitions, there were enough flavor nuances that kept this cigar quite interesting. I found the strength and body level matched up to this flavor profile perfectly. This is a cigar that I would recommend to an experienced cigar enthusiast. While it’s a little fuller and stronger than I’d normally recommend to a novice, this is a perfect cigar to get a novice to graduate to something into the medium plus range. As for myself, I found this to be a cigar I’d smoke again. Combine a great flavor profile at what is a reasonable price, this is easily a cigar I’d assess as a box worthy cigar all the way.