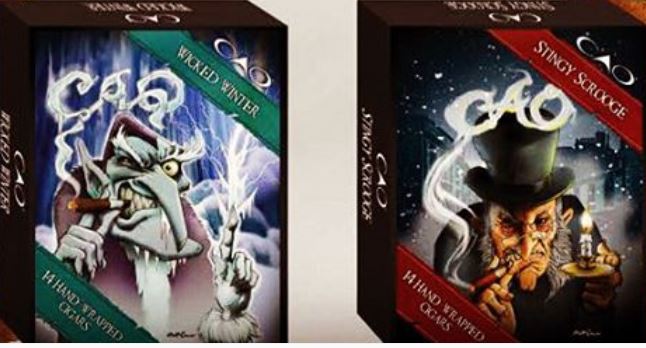 CAO has quietly rolled out its annual Christmas / Winter Themed releases for 2015. The CAO Wicked Winter and the CAO Stingy Scrooge have now begun to arrive at retailers. This marked the third consecutive year CAO has done a seasonal release.

The CAO Wicked Winter consists of a Honduran wrapper, U.S. Broadleaf binder, and a mix of Honduran and Nicaraguan filler. The CAO Stingy Scrooge is a five country blend consisting of a Connecticut Habano wrapper, Brazilian Arapiraca binder, and fillers from Nicaragua, Honduras, and the Dominican Republic. Both cigars are available in 14 count boxes. The cigars are both a 6 1/2 x 50 Toro.

The Christmas / Winter Themed releases were introduced in 2013 with the CAO Angry Snowman and CAO Evil Snowman.This was followed up in 2014 by the CAO Nasty Nutcracker and CAO Rabid Reindeer. Each of the releases has featured somewhat of an edgy theme around either Christmas or the Winter Season.

At a glance here is a look at the CAO Wicked Winter and CAO Stingy Scrooge.