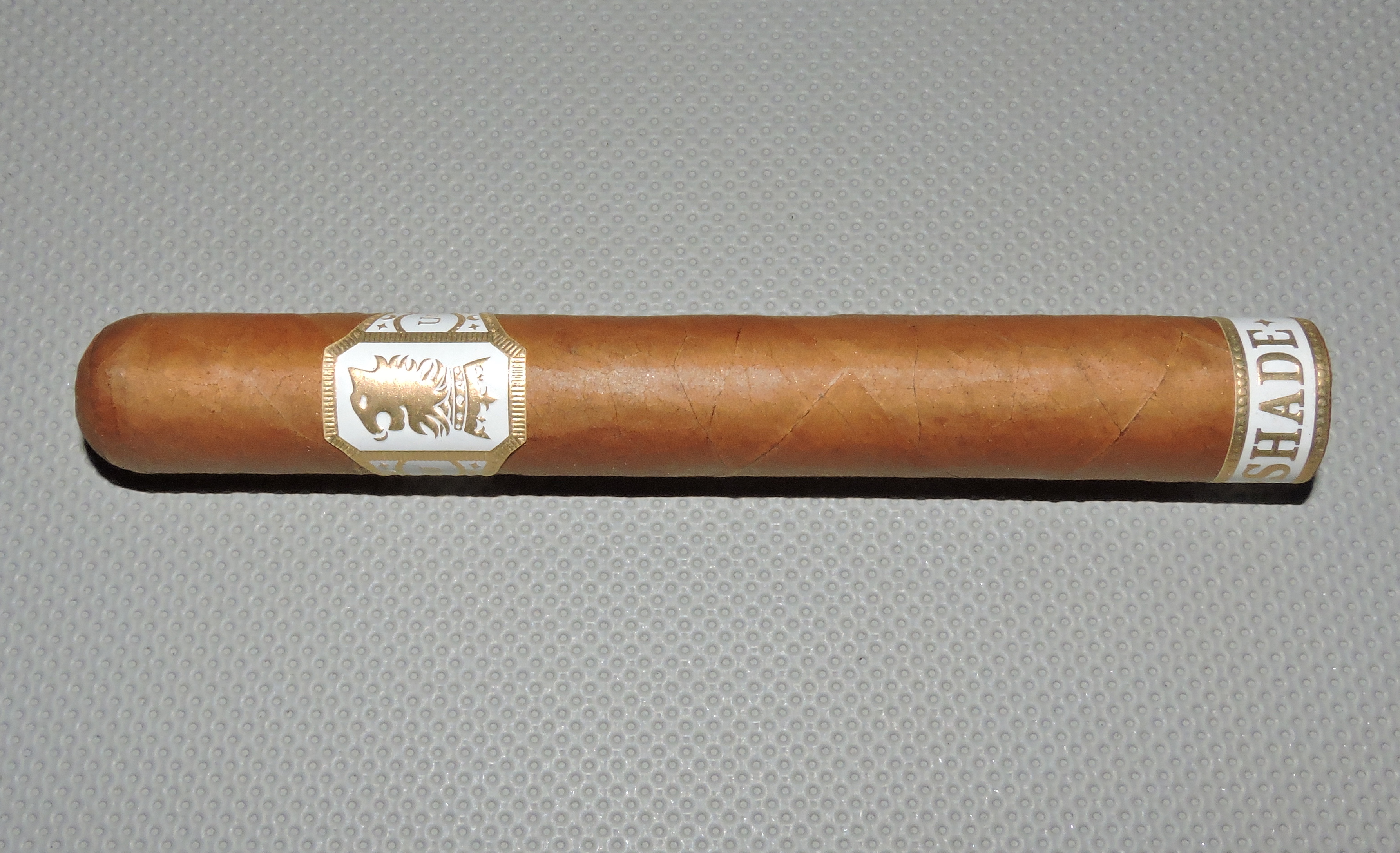 While Herrera worked with the team that developed the original Undercrown, the Undercrown Shade is a totally different blend. When Drew Estate co-founder Jonathan Drew was a guest on Episode 150 of Stogie Geeks, he acknowledged Undercrown Shade will change the messaging going forward on what the Undercrown brand will be.

Herrera has stated he does not smoke a lot of Connecticut Shade blends, therefore he challenged his team to work with him to develop a blend that would suit his palate. One can infer this is one reason why this ultimately became a non-traditional Connecticut Shade.

Without further ado, let’s take a closer look at the Undercrown Shade Gran Toro and see what this cigar brings to the table.

The cigars will be available in the same six vitolas as found in the core Undercrown (San Andres) line. The cigars are packaged in 25 count boxes. 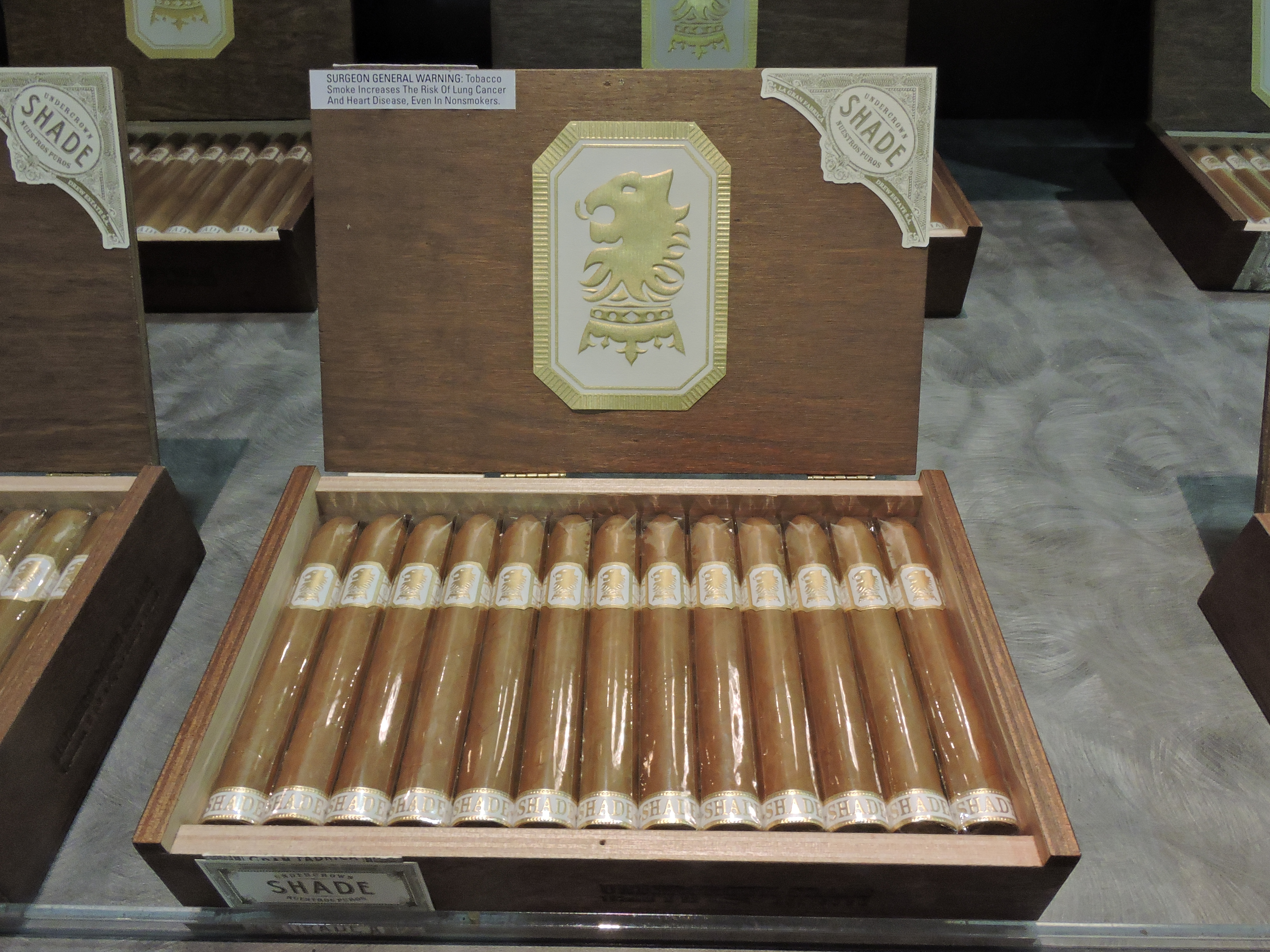 The Ecuadorian Connecticut Shade wrapper of the Undercrown Shade Gran Toro is a classic light brown shade wrapper. There is a light coating of oil on the wrapper. I found this to be somewhat of a smoother wrapper with thin veins and thin visible wrapper seams. I also found this to be a cigar with a tight pack and some weight to it.

There are two bands on the Undercrown Shade. The primary band is a variant to the original Undercrown band that features a white and gold color scheme. It features a gold Liga Privada-style lion on a gold upside down crown.That design sits on a white rectangular field that is surrounded by gold trim. To the left is a mirror reflection of the text Undercrown (although the right side of the band overlaps a lot of it). To the right is text “Undercrown”. All text appears in gold on a white background. To the far right, fastening the back of the band is the Drew Estate logo in gold font on a white background. The back of the band is stamped “DREW STATE – THE REBIRTH OF CIGARS – WWW.DREWESTATE.COM”

There is a secondary band on the footer that is white in color with gold trim. Prominent on the band is the text “SHADE” in gold font.

As I normally I do, I placed a straight cut into the cap of the Undercrown Shade Gran Toro to commence the cigar experience. Once the cap was removed I moved on to the pre-light draw. The cold draw delivered notes of cream as well as subtle cedar and marshmallow sweetness. Overall I considered the pre-light draw to the Undercrown Shade Gran Toro to be satisfactory. At this point, I removed to footer band of the cigar, lit up the cigar, and awaited what the smoking phase would have in store.

The Undercrown Shade Gran Toro began with notes of cream and wood in the forefront. There was also a slight red pepper note in the background. The wood notes quickly got more complex and transformed to a cedar sweet spice note. Meanwhile, the retro-hale delivered a combination of black pepper with cedar mixed in.

As the Undercrown Shade Gran Toro moved through the first third, the cream notes moved to the forefront. During this stage a fruit sweetness emerged. This sweetness was primarily in the background, but from time to time it floated into the forefront. Meanwhile the cedar notes were a close background note and the red pepper notes were a little more distant. There also was a slight toasty note in the distant background.

During the second third of the Undercrown Shade Gran Toro, the cedar notes moved into the forefront – joining the cream notes. The cedar provided a nice mix of sweetness and spice. The red pepper and toasty notes remained in the distant background.

The last third of the Undercrown Shade Gran Toro had more in the way of cedar and red pepper as primary notes. This made for a moderate amount of spice in the late stages of this cigar. During this stage, the cream and toast notes were still present, but more distant.  This is the way the cigar experience came to a close. The resulting nub was cool in temperature, but slightly soft to the touch.

The Undercrown Shade Gran Toro scored very nicely when it came to burn. The Gran Toro took a straight burn path from start to finish. While there was a little bit of jaggedness early on the burn line, this cleared up very quickly with some touchups. Overall, I found this to be a low maintenance burn. As for the ash, it had a near white color. The ash was a firm, tight ash that came off the cigar in clean chunks. The combustion was near perfect as the Undercrown Shade Gran Toro had an ideal burn rate and ideal burn temperature.

While this cigar had a tighter pack, it still delivered an excellent draw. The draw was open, but far from being loose. This made for an enjoyable smoking experience from start to finish.

As I mentioned up-front, the Undercrown Shade is a cigar that pushes the boundaries of a traditional Connecticut Shade cigar. This is very evident when it comes to assessing the strength and body. From a strength perspective, I found the Undercrown Shade Gran Toro to be medium right out of the gate. I found a slight increase in strength along the way, but overall I still found the Gran Toro to remain in the medium range right until the end.

As for the body, I also found this cigar to be medium. During the smoking experience, I found the body did increase slightly more rapid than the strength. By the second half, the Undercrown Shade Gran Toro was into the medium to full-bodied range. In terms of strength versus body, I gave the edge to the body.

Overall I have found the Undercrown Shade Gran Toro to be a very nice offering by Drew Estate. As I said, it is not going to fit the stereotypical mold of a Connecticut Shade cigar. I’ve smoked several sizes in the line – and right now the Gran Toro seems to be the best representation of this blend. While there was a little more spice at the end than I prefer, overall I still was quite pleased with the flavor profile of this cigar. It also does a nice job at pushing past those traditional boundaries of Connecticut Shade.

My gut tells me that time will very kind to this cigar and it will do very well when it comes to aging. This is a cigar I can recommend to a novice or experienced cigar enthusiast. It’s also a cigar I’d encouage someone to try who isn’t normally a Connecticut Shade cigar. As for myself, this is a cigar I would smoke again. It’s one that is worthy of a box split.