The Gurkha Cellar Reserve Platinum Edition is made at American Caribbean Cigars in Nicaragua. This is a factory for whom Gurkha has had a long-time relationship with in Nicaragua.

The cigars are packaged in twenty count boxes in a gray colored wine-styled storage box. 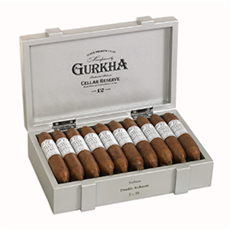 The Ecuadorian Oscuro wrapper of the Gurkha Cellar Reserve Platinum Edition Hedonism has a medium-brown woody color. Depending how light hits the wrapper, it will give off a colorado red tint to it. The wrapper has a light coat of oil on it. There are some visible veins and some thin visible wrapper seams. The cigar itself is a perfecto that is tapered on both end. The footer has almost a nozzle shape on the footer. Toward the cap there is a gentle taper. The cap itself is finished with a very small spiral pig-tail.

As mentioned, the band is a silver version of the original cellar reserve band. Like the other bands in the Cellar Reserve series, it is designed to resemble a wine label.

Prior to lighting up the Gurkha Cellar Reserve Platinum Edition Hedonism, I opted to place a straight cut to remove the cap as opposed to pulling off the spiral pig-tail. After clipping the cap, I moved on to the pre-light draw. The dry draw provided quite a bit of sweetness. I detected notes of sweet natural tobacco – which almost had a gum-like taste. There was also a mild spice that was present. Overall, I considered the pre-light draw of the Cellar Reserve Platinum Edition Hedonism to be satisfactory. At this point I was ready to light up this cigar and see what the smoking experience would have in store.

The start to the Gurkha Cellar Reserve Platinum Edition Hedonism delivered a mix of natural tobacco and red pepper. As the Hedonism burned past the nozzle tip, the flavor profile expanded and notes of chocolate and cedar surfaced. Meanwhile the retro-hale produced notes of cedar and red pepper, but I did not find this to be overpowering.

During the first third, the chocolate and the natural tobacco emerged as primary notes while the cedar and pepper spices became secondary notes. As the Hedonism moved into the second third, I found the natural tobacco remained grounded as a primary note with the chocolate floating in and out of the forefront. Meanwhile, the spices remained secondary.

As the Hedonism moved into he final third, the spices moved close to the forefront. The natural tobacco notes still dominated. The chocolate notes were now a more distant background note. This is the way the cigar experience came to an end. The resulting nub was cool in temperature, but slightly soft to the touch.

The burn of the Gurkha Cellar Reserve Platinum Edition Hedonism performed quite well. The burn path remained relatively straight from start to finish. The burn line was slightly jagged in the early stages – particularly as it moved through the tapered area by the footer, but this was easily remedied with a few touch-ups. As the cigar experience progressed, I found the burn line lost some of its jaggedness. The resulting ash had a silver-gray color. It wasn’t an overly firm ash, but it wasn’t overly loose either. There was also some slight flaking in the early stages. Meanwhile the burn rate and burn temperature were both ideal.

The draw was ideal as well. It was not too loose, nor was it too tight. This made the Hedonism an a low maintenance cigar from start to finish.

Overall I found the Gurkha Cellar Reserve Platinum Edition Hedonism to deliver a very nice cigar experience. While I still would put the maduro wrapped Gurkha Cellar Reserve Limitada as the blend under this Gurkha line that I like the best, I liked a lot of things the Platinum Edition Hedonism brought to the table.  It does a nice job at showcasing some classic Nicaraguan flavors. I also enjoyed the 5 x 58 perfecto size of the Hedonism.  This is a cigar I’d probably recommend to an experienced cigar enthusiast, but it’s one I wouldn’t discourage a novice from trying.  As for myself, this is a cigar I’d smoke again – and it’s worthy of a five pack in my humidor.

Author’s Note: We apologize for the distortion in the photos used here.