The IPCPR Trade Show is usually the time La Flor Dominicana showcases the lion’s share of its new annual releases. 2015 was no exception, and this year La Flor Dominicana’s center piece was all-new line called La Nox. The name “La Nox” is Latin for “The Night” – and this is the theme of this cigar. It’s a cigar that features a dark Brazilian wrapper and a dark theme also incorporated into the packaging of this cigar. Recently, I’ve had an opportunity to smoke the La Nox. This cigar delivers a cigar that is very different from anything in the La Flor Dominicana profile, and it is one that is a very satisfying smoke.

La Nox was a project spearheaded by Tony Gomez, the son of La Flor Dominicana owner Litto Gomez. Over the past two years, Tony had been involved with two other center piece releases by La Flor Dominicana – 2013’s Chapter One and 2014’s Capitulo II.

The packaging features a circular style box with a theme of the night. The bands will also reflect this theme. 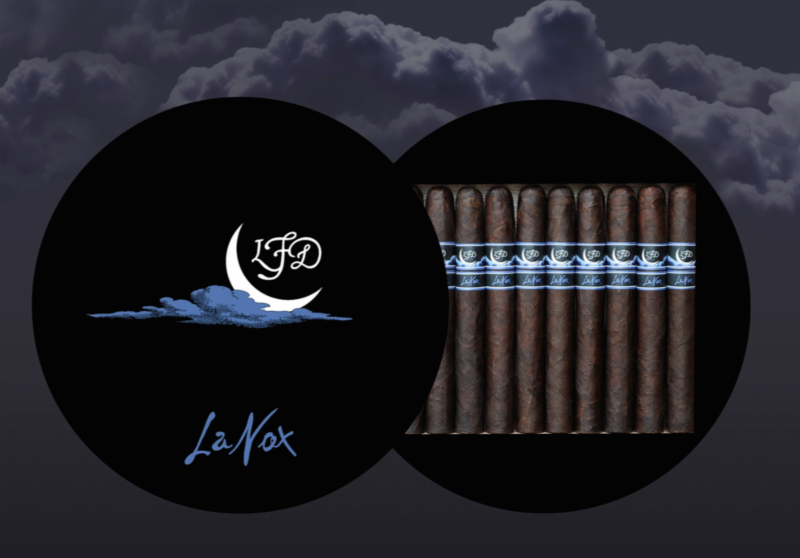 Without further ado, let’s take a closer look at the La Flor Dominicana La Nox and see what this cigar bring to the able.

La Nox is available in one size – a 6 1/2 x 50 Toro. There are ten cigars packaged in the circular boxes.

The Brazilian wrapper of La Nox has a dark espresso bean color to it. While this is a dark wrapper, there is some darker marbling is also present on the surface. There is a moderate amount of oil on the wrapper. The surface of the wrapper is on the smoother side as the wrapper seams are well hidden and any visible veins are on the thin side.

There are two bands on the La Nox. The primary band has a black background with blue and white trim on the top and bottom. The blue colored font (on both bands) has a slight lavender tint to it. On the center of the band is the LFD cursive logo in white font. This is flanked by a white crescent moon design to the lower left of the logo.  There is a blue and black cloud design to the left and right of the logo.

The secondary band also has a black background with blue and white trim. On the center of the band is the text “La Nox”  in a modern, almost handwittern style blue-colored font.

Prior to lighting up my La Nox, I went with a straight cut to remove the cap of the cigar. Once the cap was clipped, I moved on to the pre-light draw stage. The dry draw delivered a mix of leather and earth along with a slight amount of cedar and chocolate. Overall I considered the pre-light draw of the La Nox to satisfactory. At this point I was ready to light up my La Nox and see what the smoking stage would have in store.

Right out of the gate, La Nox produced a unique flavor profile that I had not seen before. I picked up notes of slightly-sweetened chocolate, oak, white pepper, dried fruit. The oak and chocolate notes moved into the forefront early while the dried fruit and pepper notes became secondary notes. Meanwhile the retro-hale produced a white pepper spice.

During the first third of the La Nox, I found the oak and chocolate notes remained in the forefront. The chocolate notes seemed to have an edge here, but never became overly sweet. At the start of the second third I found the oak and chocolate were on even footing. Meanwhile, the dried fruit and white pepper remained secondary. During this stage, the oak notes produced a charred quality while there was a slight bitter component to the dried fruit.  Both of these components worked in favor of the flavor profile and helped round out the flavor profile.

By the last third, the charred oak notes and chocolate were still in the forefront, but now with the oak notes had the edge. The pepper notes picked up and became a close secondary note. The dried fruit became more distant. This is the way the flavor profile came to a close. The resulting nub was firm to the touch and cool in temperature.

Overall this is a well-constructed cigar and this reflected nicely on the score of the burn and draw. The La Nox took a straight burn path from start to finish.. There was some slight jaggedness on the burn line, but overall this was only cosmetic and I didn’t find this cigar needed a lot of touch-ups. The resulting ash was on the firm side with a charcoal gray color. There was s slight amount of flaking, but this didn’t prove to be problem-some. The burn temperature was ideal. The burn rate was a little slower than I prefer, but this had no negative impacts other than make for a longer duration smoke. 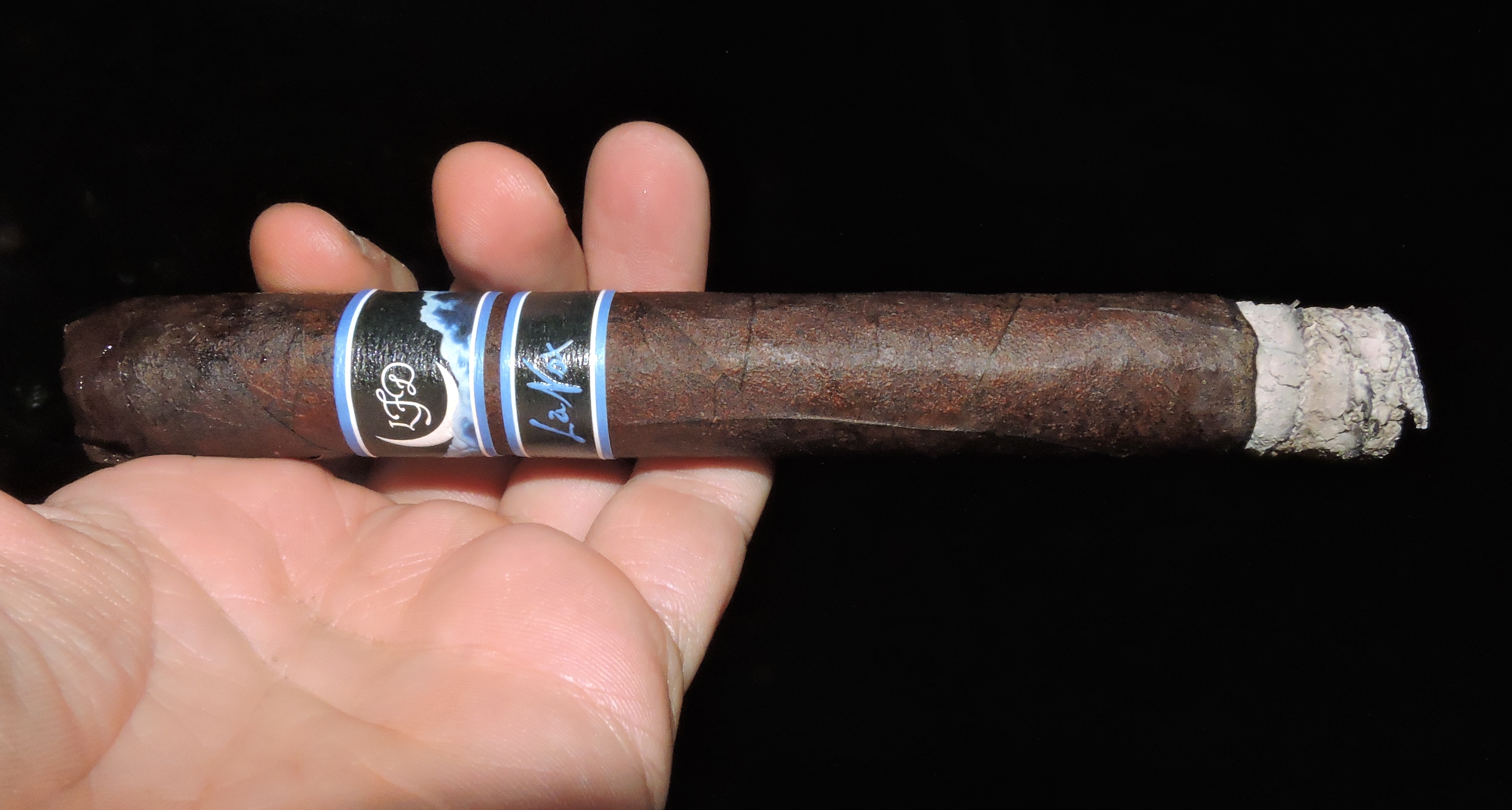 The draw to La Nox was excellent. There a slight amount of resistance – which is something I like on a draw. Despite the fact this cigar had a slight resistance, this cigar produced quite a bit of smoke. In terms of deriving flavor, this cigar didn’t require much maintenance to accomplish this.

While La Nox has a dark wrapper, this is not a cigar that is on the full-side. In terms of strength, this cigar started out medium. While there was an increase of strength along the way, the cigar remained in the medium-range right until the end. As for the flavors, they started out medium-bodied. The body level did increase and by the last third, I found the flavors had just enough depth to move into medium to full-bodied territory. In terms of strength versus body, I found these remained even until the last third when the body had a slight edge.

One side note – La Nox was recently honored with a Top Ten rating by Paul Asadoorian on our Stogie Geeks Show for 2015.

La Nox is going to deliver a vey unique flavor profile. This is a cigar that has its flavor nuances and transitions more on the subtle side. Given this is cigar that more or less falls into the “medium” range, I found the best way to pick up the complexity this cigar has to offer is to smoke it as the first cigar of the day. More-so than other cigars, with the La Nox; I found that once my palate was influenced by another cigar, it was harder to pick up these subtleties. While the 6 1/2 x 50 Toro worked for this cigar, I could not help but wonder how this cigar would smoke as a 5 x 50 robusto.  This is a cigar that can easily be positioned to both the novice and experienced cigar enthusiast. As for myself, this is a cigar I’d smoke again – and it’s one I would easily recommending purchasing multiple cigars and having a fiver in the humidor.