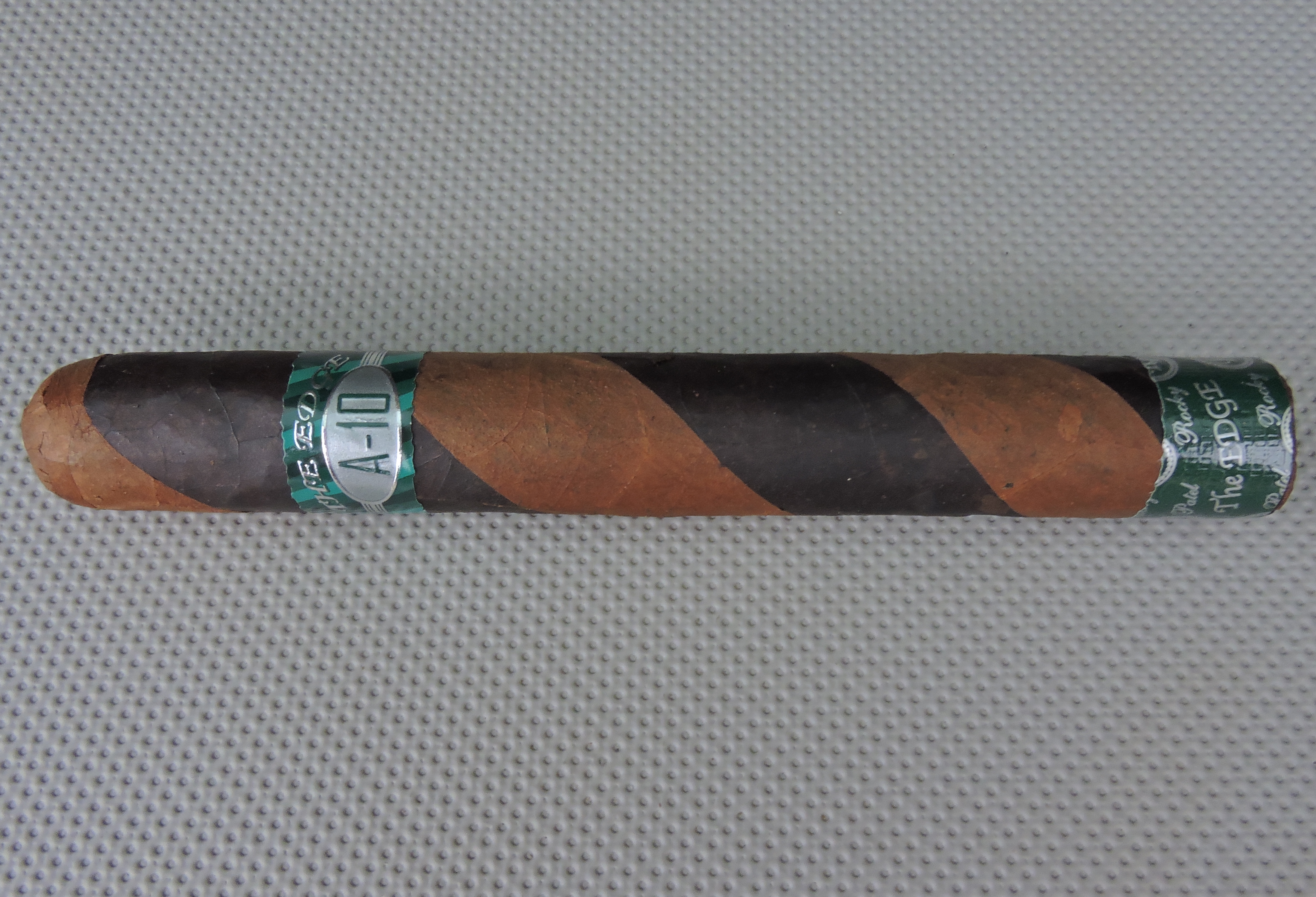 The Rocky Patel Edge A-10 is the seventh (and latest) blend to be introduced to Rocky Patel Premium Cigars’ Edge line. The line was originally launched in 2004 and was meant to be a value-priced offering. It was originally packaged without a band in rustic 100 count boxes. A lot has changed since then, as The Edge would eventually add the line’s signature footer band and some smaller box count offerings. The first two offerings in the Edge were the Corojo and a Maduro wrapper blends – with the remaining five blends released over the past ten plus years.  The A-10 pays homage to the tenth anniversary of the line. It also pays homage to the first two wrappers that started it all by incorporating them in a barber-pole format. It took a little while longer to get the A-10 to market (as ten years for Edge was 2014), but in 2015 the Edge A-10 was released. Recently I’ve had an opportunity to smoke this cigar. Overall I found this cigar to not only be an excellent offering, but one that really incorporates the best of those two original blends.

As mentioned, there are now seven blends in the Rocky Patel Edge line.  These are:

With the Edge A-10 it also becomes the first barber-pole offering by Rocky Patel Premium Cigars.

Without further ado, let’s take a closer look at the Edge A-10 and see what this cigar brings to the table:

The A-10 features an all-new blend for the Edge line. In addition to the Corojo / Maduro barber-pole wrapper, the blend features an all Central American blend with tobaccos from four countries. The cigar is produced at the El Paraiso factory in Honduras.

The Maduro component of the Rocky Patel A-10 has a dark espresso color while the Corojo component has a medium brown color. Both wrappers are arranged in a classic barber-pole style. Each wrapper component has a light coating of oil to it. The wrapper arrangement is on the smooth side with only a few visible veins.

There are two bands on the Rocky Patel Edge A-10. The primary band is something unique to the A-10.  The band has an angled striped background consisting of emerald green, dark green, and black stripes. On the center of the band is a silver oval with the text “A-10” in a dark green font. The oval is surrounded with a chrome colored marquis-like design on each side. Above the oval is the text “THE EDGE” in a modern chrome-styled font. The far right of the band has a silver and green Rocky Patel “RP” circulos logo.

The second band is on the footer and it is a green and silver version of the traditional Edge band. It consists of a green background with the Rocky Patel “RP” circulos logo, the cursive text “Rocky Patel”, and the text “The Edge” – all of which in silver font in an angled wall-paper like arrangement.

The cigar itself is packaged in more sleek and elegant wood boxes – a departure from the rustic 100 count boxes used to originally launch the brand. 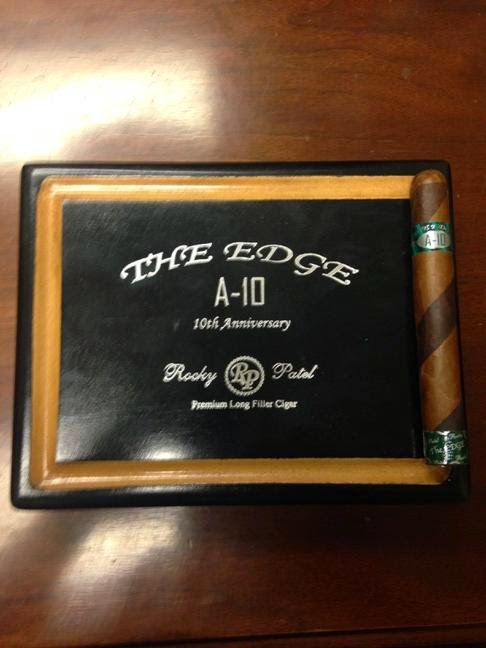 Prior to lighting the Rocky Patel edge A-10, I went with my usual choice of a straight cut. Once the cap was removed, I moved on to the pre-light draw phase. The dry draw delivered a mix of coffee, cream, and a slight cedar component. Overall I was quite pleased with what the pre-light experience had to offer. At this point I was ready to light up the A-10 and see what the smoking phase would have in store.

The Rocky Patel A-10 started out with notes of espresso and cedar. In the background there were some notes of hay and white pepper. I’ll say it was safe to infer that the maduro wrapper contrbuted the espresso notes while the corojo produced the cedar notes. Meanwhile the retro-hale produced a white pepper note as well as a slight coffee note.

During the first half of the A-10, I found both the espresso and cedar notes alternated in intensity. The hay notes were a close secondary, while the white pepper was more distant.

By the second half, I found the espresso note was now the primary flavor. The cedar notes became a close secondary note. The hay notes remained at the same intensity level as they had throughout the smoking experience. Things remained similar for the last third except I found the white pepper spice ramped up slightly in. This is the way the smoking experience remained until the end. The resulting nub was firm to the touch and cool in in temperature.

Overall I found the Rocky Patel Edge A-10 to score nicely when it came to both the burn and draw. The burn path and burn line remained relatively straight from start to finish. I didn’t find the A-10 to be a cigar that required an excessive amount of touch-ups. The resulting ash wasn’t overly tight, but it wasn’t a loose one either. On each smoke, I did find the ash to have have some flaking early on, but this diminished as the cigar progressed past these early stages. The ash itself had a salt and pepper color to it. The combustion was excellent as the A-10 had an ideal burn rate and ideal burn temperature. 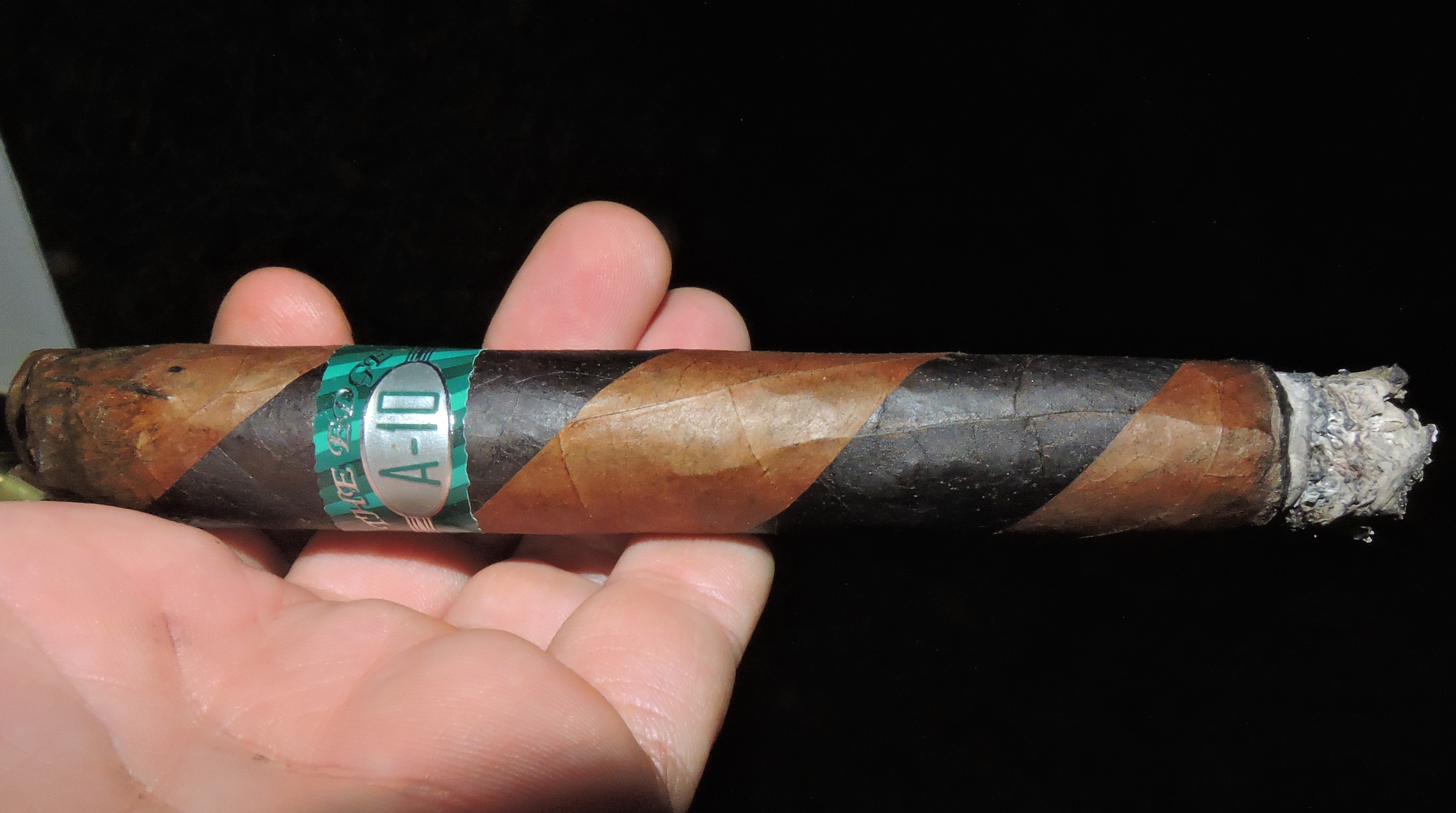 Burn of the Rocky Patel Edge A-10

The draw was not too tight, nor was it too loose. Overall I found this cigar to be a low maintenance cigar to derive flavor from.

From both a strength and body perspective, I didn’t find the Rocky Patel Edge A-10 to be a power bomb. The cigar starts out as a medium strength, medium-bodied smoke. There is an increase in both the strength and body as the smoking experience progresses, however I didn’t find either attribute to move beyond the medium range. In terms of strength versus body, I found that both attributes balanced each other very nicely – with neither attribute overshadowing the other.

As I previously mentioned, one thing that I really liked is how I was able to experience the effect of both of these wrappers with this particular barber-pole. The espresso and sweet notes seemed to be derived from maduro while the cedar and spice seemed to come from the corojo. While this isn’t a cigar that is going to undergo many flavor transitions, the barber-pole effect seemed to provide the right amount of flavor nuances. I also found medium strength, medium-body, and Toro size format all seemed tailor-made for this blend. This is a cigar I would recommend to either a novice or experienced cigar enthusiast. As for myself, this is a cigar I would smoke again – and it’s worthy of a box split.