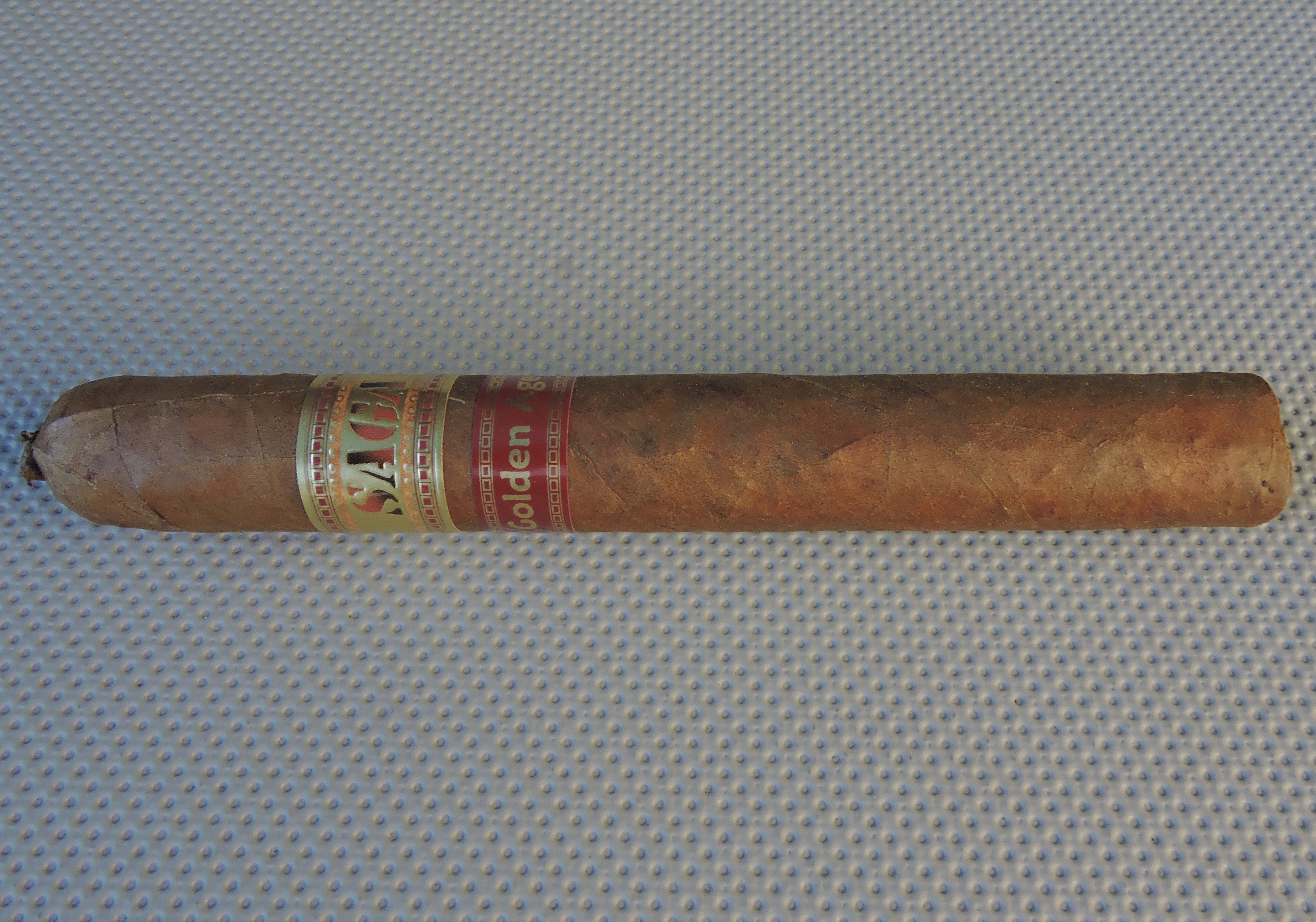 The theme of the Saga Golden Age is to deliver a classic styled smoke that is intended to be a throwback to the times of Hemingway. The cigar itself is a Dominican puro. This contrasts with the other cigar in the line, the Saga Blend No. 7 which is a multi-national blend that is intended to have more of a modern spin.

The cigars smoked for this assessment had several months of age on them, Without further ado, let’s take a closer look at the Saga Golden Age Corona Gorda and see what this cigar brings to the table.

As mentioned the Saga Golden Age is a Dominican Puro. The cigar features a Corojo 2006 wrapper and filler tobacco that has been grown in the Dominican Republic from original Cuban seeds.

The Saga Golden Age is available in four sizes.

The Dominican Corojo wrapper of the Saga Golden Age Toro has a light brown color with a significant rosado tint to it. Upon closer examination, there is a some darker marbling. There is a light coating of oil on the wrapper. While there are some visible veins and visible wrapper seams, the wrapper’s surface is on the smoother side. The cap is finished with spiral pig-tail cap.

There are two bands on the Saga Golden Age. The primary band is gold in color. Prominently displayed on the middle of the band is the text “SAGA” in a modern red-colored font. There is a row of a gold rivet-like design above and below the text. There is also a row of red rivets toward the top and bottom of the band.

The secondary band is red in color. The band features the text “Golden Age” in gold font. There is a row of square shaped gold adornments across the top and bottom.

As opposed to pulling off the spiral pig-tail cap, I elected (as I almost always do) to place a straight cut and remove the entire cap. Once the cap was clipped, I moved on to the pre-light draw phase. The pre-light draw started out with notes of natural tobacco and cedar, but this soon gave way to a mixed fruit note. Overall I considered the pre-light draw of the Saga Golden Age Corona Gorda to be excellent. At this point, I was ready to light up this cigar and await what the smoking phase would have in store.

As the Saga Golden Age Corona Gorda burned through the first third, the primary notes changed to a combination of cedar, natural tobacco and cinnamon. The fruit notes remained secondary, but toward the start of the second third, I found the fruit notes occasionally made their way into the forefront. It was also at this point where I picked up a slight pepper note. The fruit sweetness and pepper spice had a slight lingering effect on the tongue after the draw was complete.

When the Saga Golden Age reached the final third, I found the pepper and cinnamon notes remained primary. The fruit notes returned to the background and the natural tobacco notes also receded into the background. The creaminess slowly diminished on this cigar. While there was spice at the end, it never assaulted the palate. The resulting nub was firm to the touch and cool in temperature.

Overall I found the Saga Golden Age Corona Gorda to be a well-constructed cigar and this reflected nicely on the burn and draw attributes. The burn path remained relatively straight from start to finish. The burn line itself had a little un-evenness and this was easily remedied with some touch-ups. The number of touch-ups needed did not prove to be excessive. As for the ash produced, it had a light gray color. While the ash was relatively firm, there was some minor flaking along the way. The combustion of the Saga Golden Age Corona Gorda was excellent as the cigar had an ideal burn rate and burn temperature.

The draw to the Saga Golden Age Corona Gorda was open, but not loose. This was a low maintenance cigar

As I mentioned the cigars for this assessment had some age on them. I found the Saga Golden Age Corona Gorda to be a little more dialed back when compared to the Toro size I smoked earlier this year. I’ll infer that the time in the humidor could have led to this. Overall I found Corona Gorda to be a medium strength, medium-bodied cigar. There was a slight increase in intensity with both attributes, but the Corona Gorda never got out of the medium range. Both the strength and body balanced each other very nicely with neither attribute overshadowing the other.

The Saga Golden Age Corona Gorda is definitely one of the hidden gems in the Saga Cigars portfolio. I found this blend fit the Corona Gorda format like a glove. I also found time to be kind to this blend as well.  The end result was an excellent cigar with great flavor and a nice level of complexity. Consistent with the line, there were both classic and contemporary attributes to this cigar. I found this blend had some old school cigar qualities with the woody and cedar notes,  On the other hand, the cinnamon and sweet fruit notes were on the contemporary side. This is a cigar I’d recommend to a novice or experienced cigar enthusiast. As for myself, this is a cigar I’d easily smoke again. It’s a great everyday smoke, and one that is certainly box worthy.

* Saga Cigars are a sponsor of Cigar Coop and Stogie Geeks.