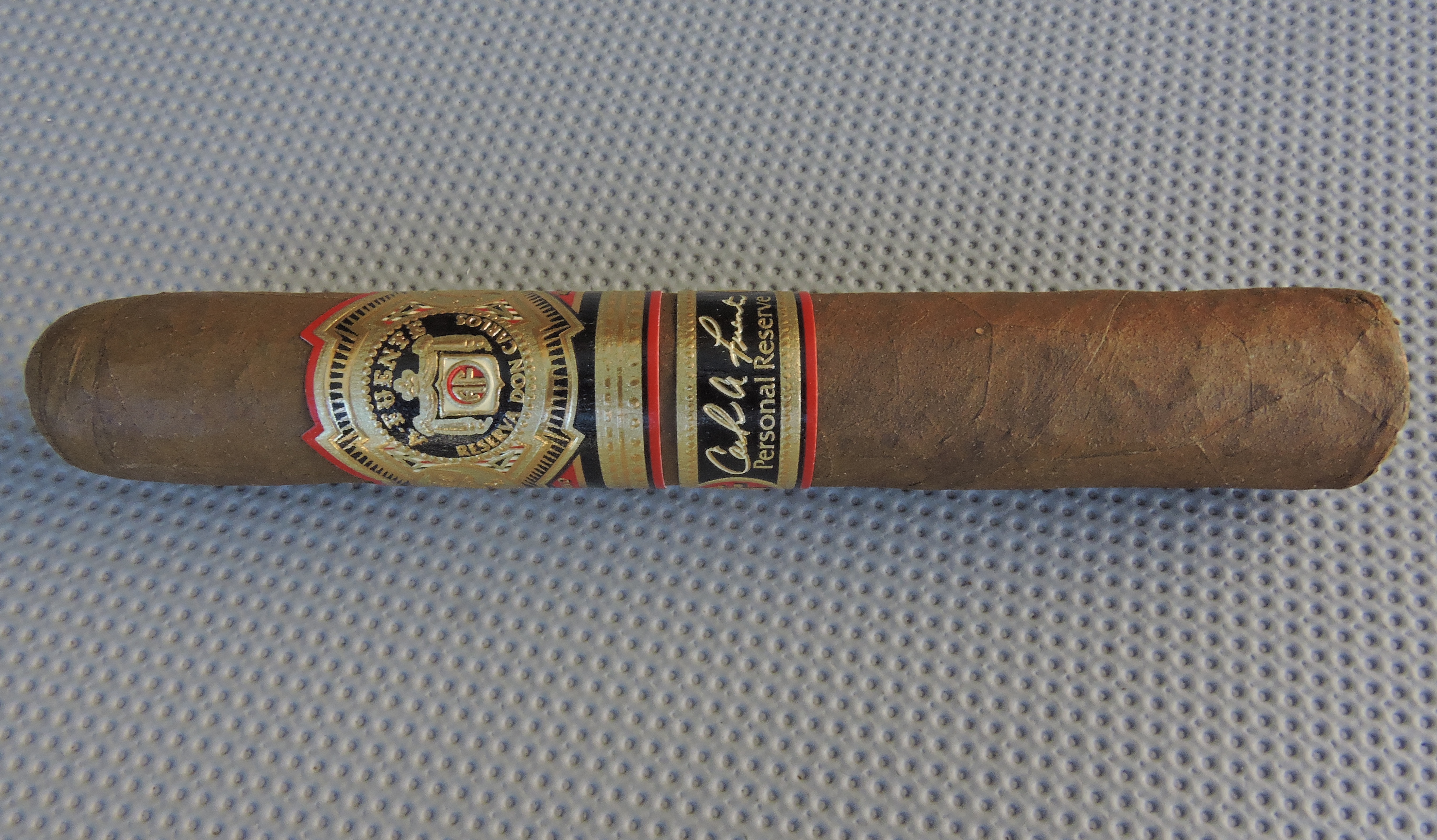 This is not the first time Fuente Sr’s private blend has been released. The Don Carlos Senior has been a cigar that has appeared several times over the years. It has been seen at select events such as ones sponsored by Cigar Family Charitable Foundation. In 2010 and 2011, a select set of retailers also received the Don Carlos 75th and 76th cigars – said to be the same cigar. Fuente has not said how 2015’s Don Carlos Personal Reserve cigar differs from those releases. The Personal Reserve is a little bigger (5 x 50) than the Don Carlos Senior releases (which were reported as 5 x 48).

Without further ado, let’s take a closer look at the Arturo Fuente Don Carlos Personal Reserve and see what this cigar brings to the table.

The Arturo Fuente Don Carlos Personal Reserve is available in one size – a 5 x 50 Robusto. There are some reports of the cigar being a 5 1/4 x 50 Robusto. We did not take a measurement on the cigar.

The cigar was packaged in 20 count boxes. Each box packaged with a pair of Carlos Fuente Sr. white-colored smoking gloves that say “The Man’s 80th”.

The Cameroon wrapper of the Don Carlos Personal Reserve has a medium brown woody color to it. Upon closer examination, there is some darker marbling on the surface. There is also a very light coating of oil on the cigar. The surface of the wrapper is quite smooth. Any visible veins are quite thin, and most of the wrapper seams are well hidden.

There are two bands on the Don Carlos Personal Reserve Robusto. The primary band is a variation of the classic Arturo Fuente Cigar band that features a red, gold, and black color scheme. The band features a white shield in the middle with the letters “AF” in gold font sitting on a red circle in the middle of the shield. The shield is surrounded by gold and sits on a larger black circular background. In gold font is the text “A. FUENTE” and “RESERVA DON CARLOS” on the top and bottom of the black circular background respectively. There is a variety of gold adornments that surround the red circular background. On the lower left and lower right of the band is the text “HAND” and “MADE” respectively – both in gold font sitting on a red background. The band itself is trimmed in red.

The secondary band rests just below the primary one. It features a black-colored nameplate-like design on the center on the band with Carlos Fuente’s signature in gold font. Just below the signature is the text “PERSONAL RESERVE – also in gold font. Each side of the nameplate design as a red circle with the initials “CF” in gold font. The nameplate design itself is trimmed in gold. To the left and right of the red circles are two gold medallions. Finally the lower portion of the band has red trim.

Prior to lighting up the Don Carlos Personal Reserve Robusto, I went with a straight cut. Once I successfully clipped the cap on my cigar, I moved on to the pre-light draw. The dry draw treated me to a mix of sweet natural tobacco, along with a slight floral and a slight spice note. Overall, I considered the pre-light draw to the Don Carlos Personal Reserve Robusto to be very good. At this point, I was ready to light up my cigar and see what the smoking phase would have in store.

The Don Carlos Personal Reserve Robusto started out with a mix of sweet natural tobacco and lemon. There also were some background floral, grass, and black pepper notes. The black pepper and lemon also was present on the retro-hale – creating a very unique experience.

As the Don Carlos Personal Reserve Robusto moved through the first third, the primary notes evolved to more of a lemon-grass flavor.  The natural tobacco and floral notes dissipated. Meanwhile I still detected the black pepper in the background.

By start of the second third, the lemon grass notes still remained up front and the pepper remained in the background. There was now a cream component that surfaced. As the Don Carlos Personal Reserve Robusto moved through the second third, I found that this cream component intensified. By the second half, I found this cream note took control as the primary note. The lemon-grass became a close secondary note. The pepper was also present in the background.

During the last third, I found the Don Carlos Personal Reserve Robusto continue to deliver plenty of notes of cream. This was also joined by some earth notes.  The pepper notes now were closer to the forefront. Meanwhile the lemon-grass was now more distant. This is the way the smoking experience came to a close. The resulting nub was firm to the touch and cool in temperature.

The Don Carlos Personal Reserve Robusto delivered an excellent burn from start to finish. The burn path remained straight from start to finish. There was a slight curvature on the actual burn line. This curvature was easily remedied with a few touch-ups along the way. The resulting ash was tight and firm with a salt and pepper color to it. In terms of the combustion, both the burn rate and burn temperature were ideal. 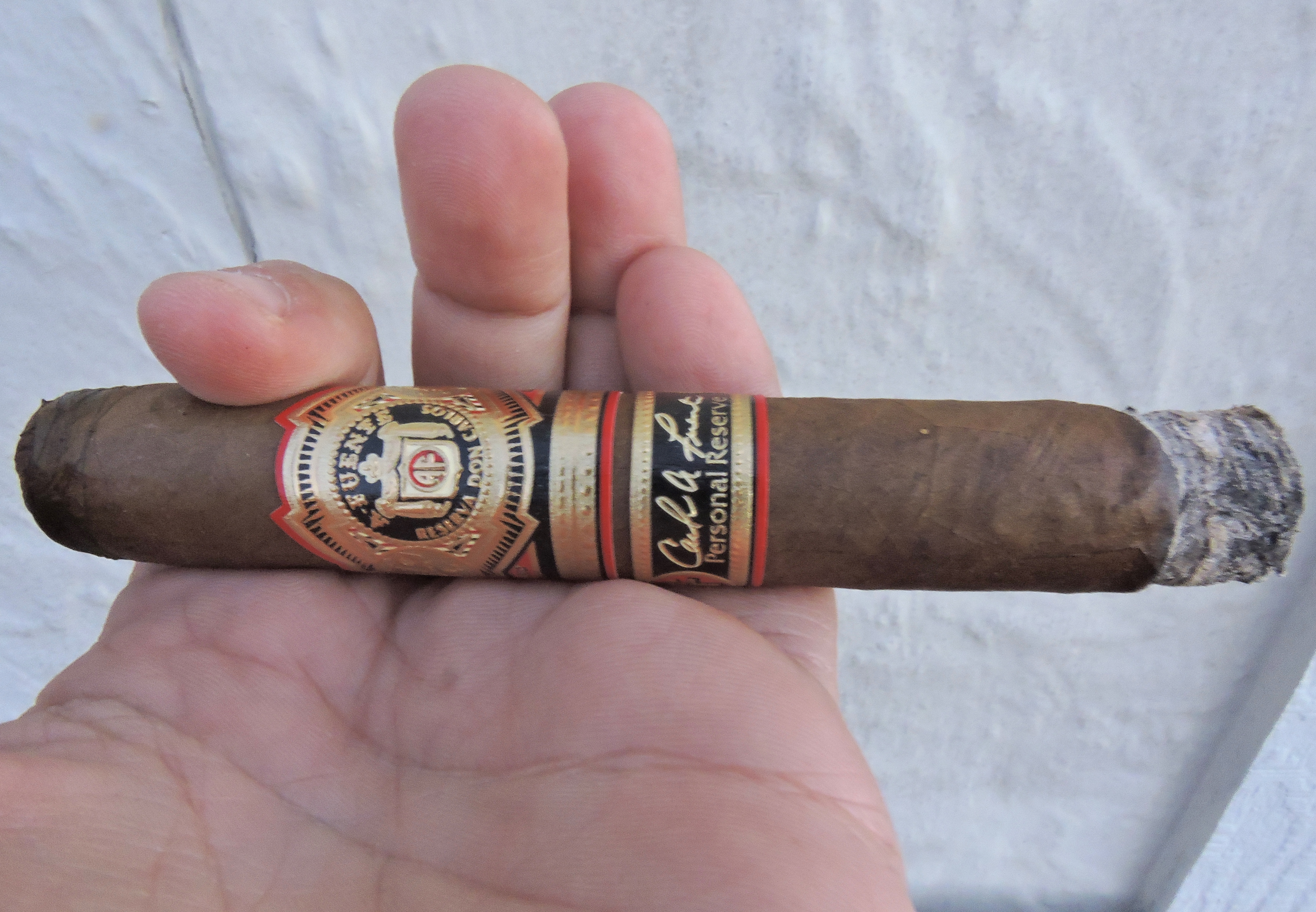 The draw to the Don Carlos Personal Reserve Robusto performed quite well too. It was an open draw, but not loose draw. This made this cigar a low maintenance cigar to derive flavor from.

From a strength perspective, I did find the Don Carlos Personal Reserve Robusto had a little bit of kick. I assessed this cigar as being a medium to full cigar from start to finish.

As for the body, I found this to be a little interesting. The body initially started out medium to full. By the second third (especially as the cigar became more creamy), I found Don Carlos Personal Reserve Robusto dialed back to medium-bodied. For the remainder of the cigar experience, the body remained a solid medium.

As for strength versus body, I found both attributes balanced each other evenly in the first third. For the remaining 2/3, I found the strength had a slight edge over the body.

Oveall I found the Arturo Fuente Don Carlos Personal Reserve to be a cigar that fired on all cylinders. This cigar had excellent flavor, excellent construction, and plenty of complexity. It’s not only an enjoyable cigar, but its a unique cigar. The creamy lemon-grass notes were not something I expected. It’s anyone’s guess how often these will be released. At a $14.00 price point, it is also very fair for a cigar of this quality. Unfortunately, I’ve (recently at press time) seen this cigar listed from one retailer as high as $35.00, so buyer beware. This is a cigar I’d probably recommend to a more seasoned cigar enthusiast because it is a little stronger than I’d give to a novice. As for myself, this is a cigar I’d hunt down (at the fair price), and get a box of them.