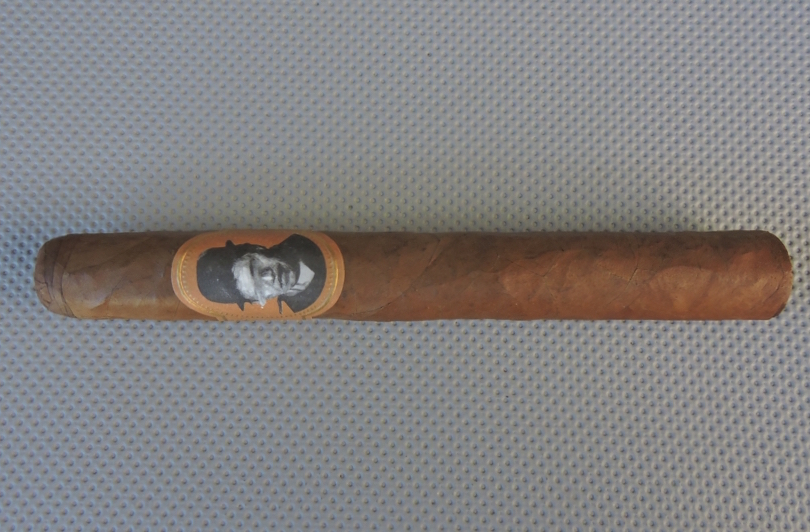 Prior to the 2015 IPCPR Trade Show, word came from Caldwell Cigar Company of a new cigar line called Blind Man’s Bluff. When Robert Caldwell returned to the cigar business last year with Caldwell Cigar Company, he went to the Dominican Republic and teamed up with Tabacalera William Ventura to produce his lines. With Blind Man’s Bluff, Caldwell returns to Honduras. We say “return” because while he was with Wynwood Cigars, he produced he produced his Wynwood Honduras there. Blind Man’s Bluff was released in three regular production sizes, but recently a Corona Gorda was added as a fourth size. This Corona Gorda is a limited production shop exclusive to Burns Tobacconist in Chattanooga, Tennessee. Recently, I’ve had an opportunity to smoke the Burns’ exclusive Blind Man’s Bluff Corona Gorda. Overall, I found this to be an excellent addition to Caldwell’s portfolio.

For Blind Man’s Bluff, Caldwell is teaming up with the Agroindustrias Laepe S.A factory. If this factory sounds familiar, it is because it is the factory owned  by Davidoff  where Camacho Cigars are made. Last year, Davidoff announced plans to expand this operation in Honduras.

Burns Tobacconist has been the recipient of three shop exclusives in the past year. The other two include the La Aurora Cien Anos Lancero Cameroon and Guayacan’s Sabor de Chattanooga.

Without further ado, let’s break down the Blind Man’s Bluff Corona Gorda and see what this cigar brings to the table.

The Blind Man’s Bluff Corona Gorda shares the same blend as the other three vitolas. It features tobaccos from three countries.

One note is that this cigar has also been referred to as the Blind Man’s Bluff Corona.

The Ecuadorian Habano wrapper of the Blind Man’s Bluff Corona Gorda has a medium brown, dark caramel color to it. There is a decent amount of oil on the surface of the wrapper. There is a slightly bumpy look to the wrapper. The wrapper has some visible veins and some thin visible wrapper seams. There is a nice barnyard aroma given off from the footer.

The band to the Blind Man’s Bluff has a butterscotch color to it. The center of the band features a charcoal sketch of a blindfolded man wearing a fedora hat and a cigar in his mouth. The sketch is surrounded with a gold dotted oval. The left side of the band has the slogan “WE OWN THE NIGHT” in a gold a hand-written style font. To the right is the text “BLIND MAN’S BLUFF” in larger gold-colored classic-style font. There is gold trim going around the band. On the far right is the text “DANLI” that is “etched” on the trim in landscape mode.

As I normally do, I went with a straight cut to kick off the cigar experience of the Blind Man’s Bluff Corona Gorda. Once the cap was clipped, I moved on to the pre-light draw. The dry draw provided notes of natural tobacco, straw, citrus, and a slight tingly spice. Overall I considered this to be a very good pre-light draw. At this point I was ready to light up the Blind Man’s Bluff Corona Gorda and see what the cigar experience would have in store.

Right out of the gate, there was a nice mix of flavors with the Blind Man’s Bluff Corona Gorda. I detected notes of black pepper, cedar spice, straw, citrus, and cream. Once the cigar settled in, some notes of coffee emerged. I found the coffee and citrus notes quickly emerged as the dominant flavors early on while the other notes settled in the background. The spices were prominent on the retro-hale as I got a mix of black pepper and cedar.

During the first third of the Blind Man’s Bluff Corona Gorda, the coffee notes had the edge. The citrus notes from time to time were still present in the forefront. Meanwhile the cedar, straw, and cream notes remained in the background.

By the last third of the Blind Man’s Bluff Corona Gorda, the cedar and pepper spices took control.  The coffee notes still were in the equation, but were a little less prominent. The citrus was a more distant secondary note and the straw and cream had dissipated. The close to the Blind Man’s Bluff Corona Gorda was on the spicy side. The very end had a little harshness, but at this point it was time to put the cigar down. The resulting nub was firm to the touch and cool in temperature.

Overall the Blind Man’s Bluff Corona Gorda scored quite well when it came to burn. The burn path remained straight and the burn line remained relatively sharp throughout the smoking experience. A light gray charcoal ash was produced as the cigar burned. I didn’t find the ash to be overly firm, but it wasn’t a loose, flaky ash either. The cigar had excellent combustion as it had an ideal burn temperature and ideal burn rate.

The draw to the Blind Man’s Bluff Corona Gorda was excellent. It was not too tight, nor too loose. This made the cigar a low maintenance cigar to derive flavor from.

I’ve been smoking through several of the vitolas in the Blind Man’s Bluff line. I did find the Corona Gorda to offer more in the way of complexity compared to the three regular production offerings. I also found the Corona Gorda to have a more spicier profile. This is a cigar that is ready to smoke out of the box. At the same time, I’ve seen the other vitolas get better with age, and have no reason to think the aging potential doesn’t exist with the Corona Gorda. This is a cigar I’d recommend to a more experienced cigar enthusiast. As for a novice, this is a cigar I’d position to someone looking for something “medium plus”. As for myself, I’m sold on the Blind Man’s Bluff Corona Gorda. It’s a cigar I’d purchase multiple cigars of. It’s easily worthy of a fiver in my book.