At the 2015 IPCPR Trade Show, E.P. Carrillo showcased a new limited edition collection called Ernesto’s Humidor No. 1 Edicion 2015. The collection features three limited different limited production blends – each described as being a personal blend of company founder Ernesto Perez-Carrillo.  The blends include: Connecticut (an Ecuadorian Connecticut Shade wrapper blend); Colorado (an Ecuadorian Sumatra wrapper blend, and Maduro (a Connecticut Broadleaf blend). Ten cigars from each of the three blends are included in a commemorative humidor. Today I take a closer look at the the Connecticut blend. Overall I found this to be a very enjoyable installment in the E.P. Carrillo portfolio of offerings. 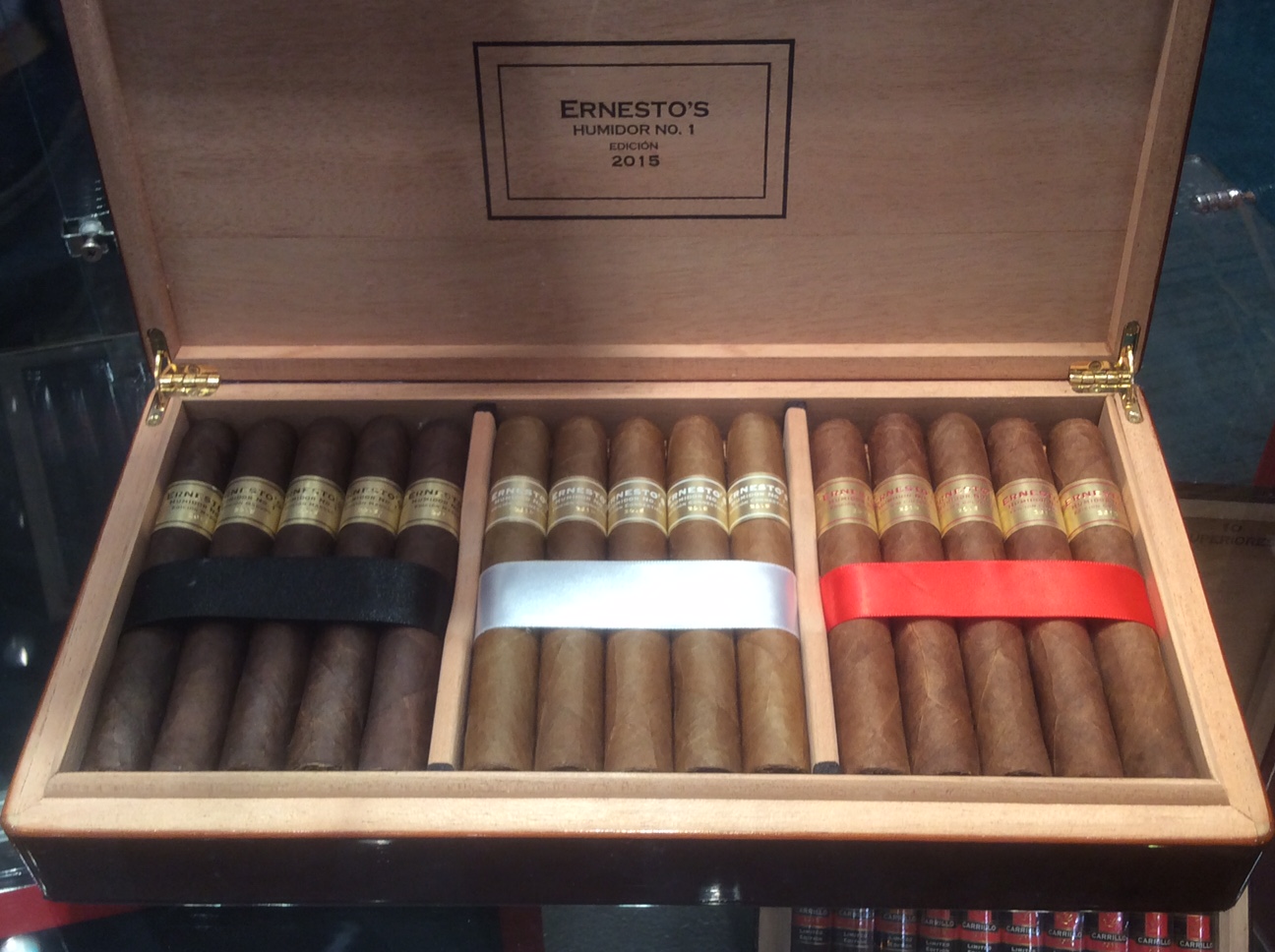 Without further ado, let’s take a closer look at Ernesto’s Humidor No. 1 Edicion Connecticut 2015 and see what this cigar brings to the table.

The three blends making up Ernesto’s Humidor No. 1 Edicion 2015 are offered in one size – a 6 x 54 Toro. The three blends are distinct – meaning it is not the same binder and filler with a different wrapper. This is a limited edition series, but the are some refills available to the brands.

For completeness, we show the three blends making up Ernesto’s Humidor No. 1 Edicion 2015

The band has a dulled gold colored background with white font. The text “ERNESTO” appears on the upper portion of the band. Just below it is the text “HUMIDOR NO. 1” in a smaller font. Just below that text is the text “EDICIÓN CONNECTICUT” in a smaller font. Finally below that text is the text “2015” embossed on the band. There is a white pinstripe toward the top and toward the bottom of the band. On the far right is a variation of the E.P. Carrillo logo featuring a red rounded square with gold and red trim. On the square are the scripted “EP” initials in gold. Below it is the text “CARILLO” in small white font.

As I normally do I started my experience of Ernesto’s Humidor No. 1 Edicion Connecticut 2015 with a straight cut. Once the cap was removed I moved on to the pre-light draw. The dry draw provided a mix of cream and a subtle cedar note. This subtle cedar note wasn’t too sweet, nor was it too spicy. Overall I considered this to be a satisfactory pre-light draw. At this point I was ready to light up my Edicion Connecticut 2015 and see what the smoking phase would have in store.

Ernesto’s Humidor No. 1 Edicion Connecticut 2015 started out with notes of wood, cream and black pepper. I found the wood notes became primary early on with the cream and pepper moving into the background. Meanwhile I detected black pepper on the retro-hale.

As the cigar moved through the first third, a natural tobacco note emerged. While the woody notes remained primary, the natural tobacco was a secondary flavor with the cream and black pepper. The pepper had a slight lingering effect on the tongue on the after-draw.

By the second third of the Edicion Connecticut 2015 I found the wood notes started to morph into having more of a cedar quality. This provided more of an enhanced flavor in the forefront. Meanwhile while the cream and natural tobacco remained secondary, these two notes from time to time surfaced in the forefront. Meanwhile the pepper remained secondary, and started to increase later in the second third.

During the last third, there definitely was more of a cedar quality to the notes in the forefront. The pepper now as a part of the full draw. While there was more spice, I never found it to be overpowering. This is the way the experience of the Edicion Connecticut 2015 came to a close. The resulting nub was slightly soft to the touch, but cool in temperature.

From a burn perspective, the Edicion Connecticut 2015 scored nicely. The cigar maintained a straight burn path from start to finish. There was a slight curvature on the burn line, but I didn’t find this was a cigar that needed an excessive amount of touch-ups. The resulting ash had a charcoal gray color and was on the firm side. The burn temperature was ideal. I did find this cigar burned a little fast, but this had no adverse effects other than reduce the smoking time of this cigar (about 55 minutes).

The draw of the Edicion Connecticut 2015 performed quite well. I’d categorize this as an open draw, but not a loose one. It’s safe to infer a little more resistance of the draw could have led to a more ideal burn rate, but as I mentioned this really had no adverse effects other than reduced smoking time.

Both the strength and body balanced each other nicely throughout the smoking experience with neither attribute overshadowing the other.

This is a cigar that I would recommend to either a novice or experienced cigar enthusiast. As for myself, this is a cigar I would smoke again. It’s a cigar worthy of have a five pack in the humidor.