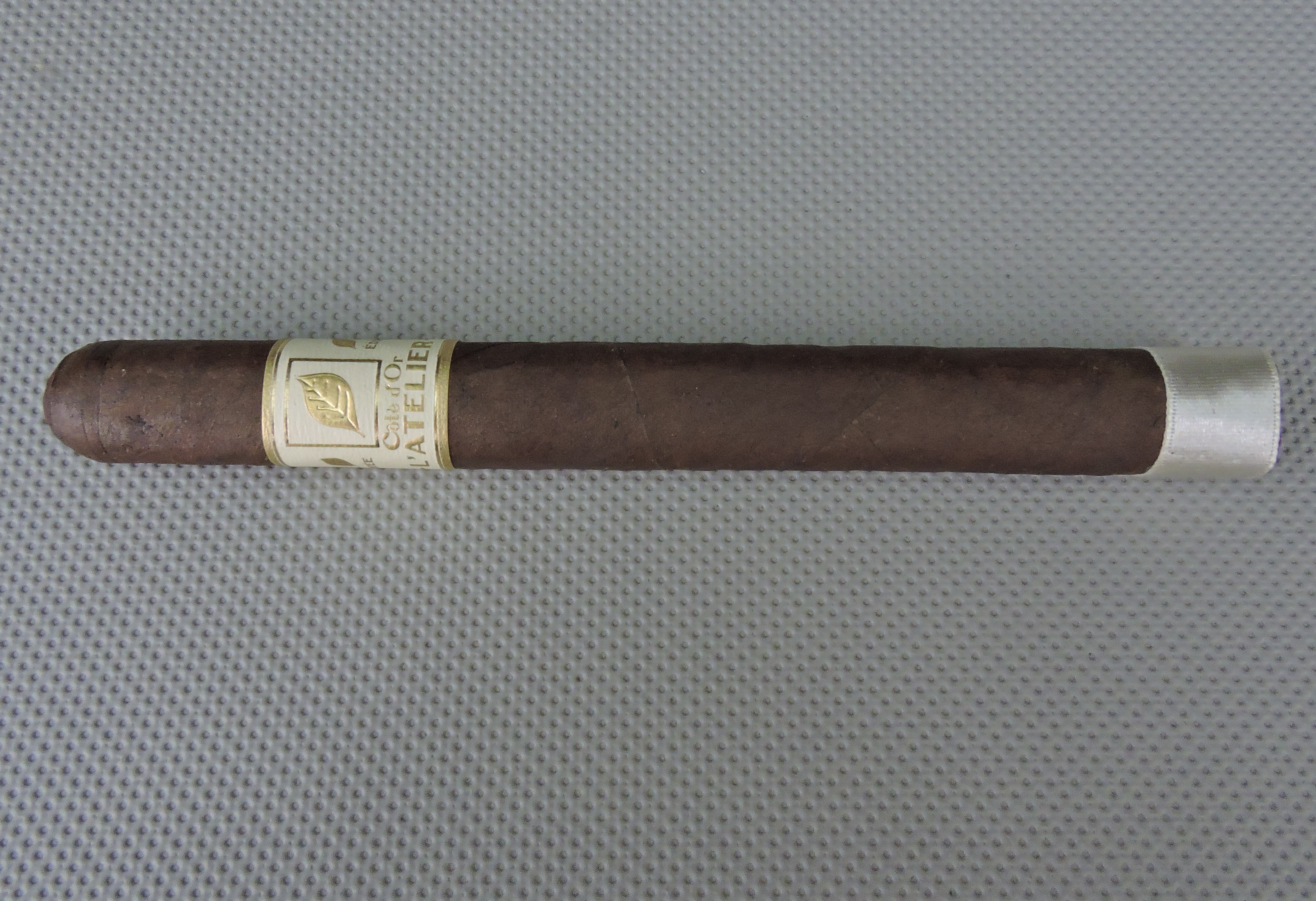 In 2015, L’Atelier Imports, introduced a new limited edition cigar called L’Atelier Côte d’Or. This is L’Atelier’s second limited cigar release following the L’Atelier Extension de la Racine (L’Atelier Imports’ annual limited edition cigar made available only to retailers that attend the IPCPR Trade Show). With the Côte d’Or, it features two key tobacco components. First up, it incorporates Pelo de Oro tobacco in the filler – a tobacco that typically has low yield because it is susceptible to disease and mold. Secondly, the cigar is finished with an Ecuadorian Sancti Spiritus wrapper – a tobacco that is a staple found on all of the L’Atelier branded cigars. Recently, I’ve had an opportunity to smoke the Côte d’Or. Overall while I wouldn’t call this the best L’Atelier release, I did it’s still one worth checking out.

When we previewed the release of the L’Atelier Côte d’Or, we described the meaning of the name and the analogy with the wine industry

Finally, this release priced at $16.00 is the most premium offering offered by L’Atelier Imports to date.

Without further ado, let’s break down the L’Atelier Côte d’Or and see what this cigar brings to the table.

Sancti Spiritus is a tobacco leaf grown by the Oliva family with a seed from the Garcia family. It is a hybrid of Criollo and Pelo de Oro. The irony of it being used in this blend is that it was intended to be a replacement seed for Pelo de Oro – namely because of the problems associated with growing Pelo de Oro. The priming of Sancti Spiritus used on Côte d’Or is the same one that is used on the L’Atelier Selection Speciale line.

In addition to Pelo de Oro tobacco, the cigar utilizes a double binder.

A single vitola is being made – a 7 x 47 soft-pressed Churchill.

The higher priming of Sancti Spiritus used on the L’Atelier Côte d’Or gives the wrapper a chocolate brown color that is almost maduro looking. There is a coating of oil on the wrapper. The wrapper has very thin veins and thin visible wrapper seams. As mentioned, the box-press is soft – meaning there is some degree of rounding on this box-press.

The band of the Côte d’Or has an antique white background with gold font on it. The front of the band features a leaf surrounded by a square. Below the square is the text “Côte d’Or” and below that text is the text “L’ATELIER” in larger font. There are four small leaves to the left and right of the square with the text “EDITION LIMITED” below it. There is a gold stripe protruding  to the left and right of the “L’ATELIER” text. Above that text is the text “2015” in small font. The band is finished with gold trim.

There is also a white ribbon above the footer of the cigar.

As the L’Atelier Côte d’Or moved through the first third, a natural tobacco note joined the earth notes in the forefront. The cocoa receded into the background joining the white pepper notes.

The second third of the Côte d’Or was very similar to the first third. One difference was the emegence of some orange peel notes in the background.

Later in the second third, the pepper notes of the Côte d’Or started to increase. By the last third, I still found the earth and natural tobacco to be the primary notes, but the pepper notes were now close behind. The orange peel and cocoa notes had also significantly diminished, but had not completely dissipated. This is the way the cigar experience of the Côte d’Or came to a close. The resulting nub was cool in temperature, but slightly soft to the touch.

Overall I found the burn of the L’Atelier Côte d’Or to perform quite well. The burn path remained straight from start to finish. There was a slight curvature to the burn line along the way, but this was easily remedied by some touch-ups. The amount of touch-ups needed was not excessive. The resulting ash was firm with a silvery / gray color. The combustion to the L’Atelier Côte d’Or was excellent as this cigar had an ideal burn rate and ideal burn temperature. 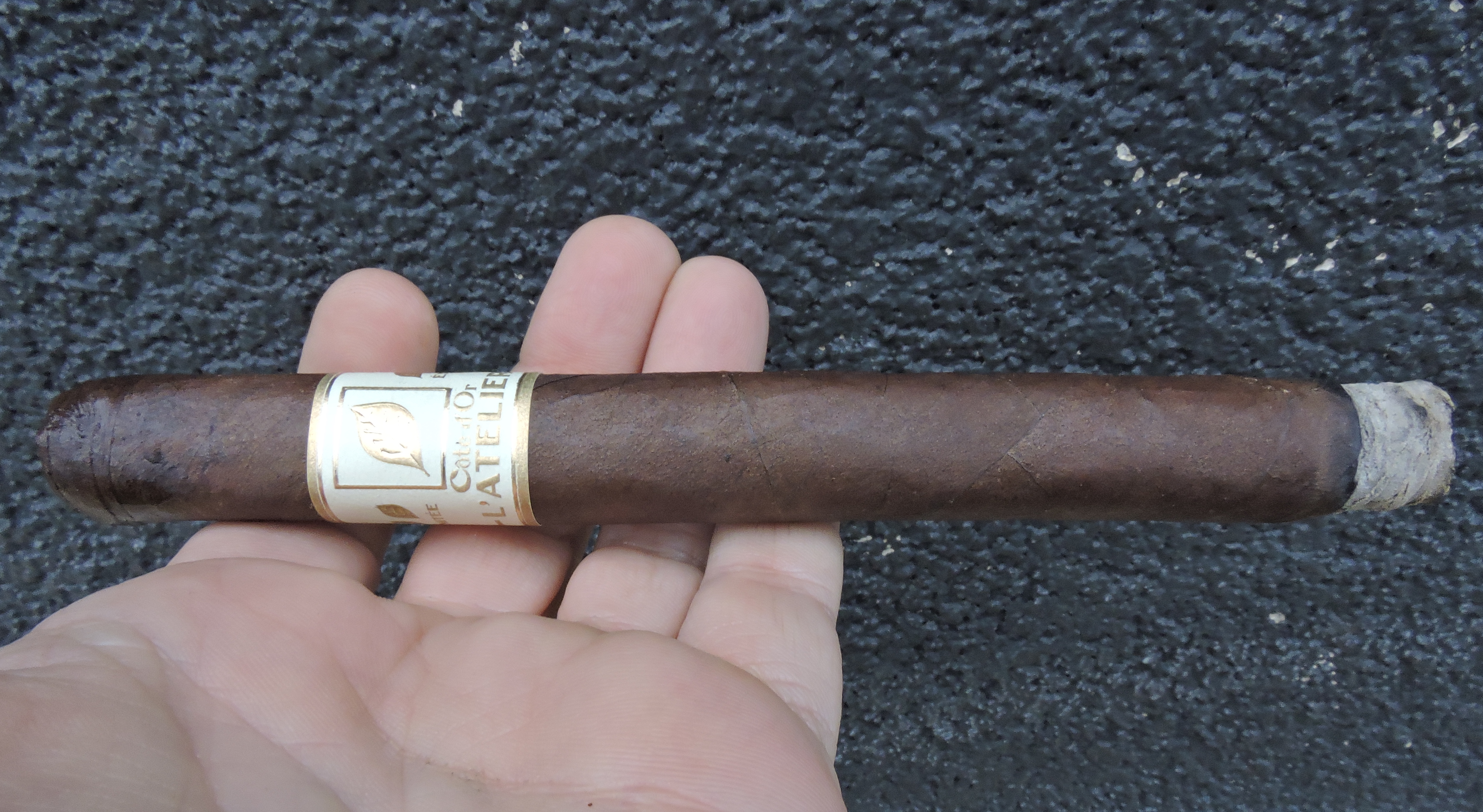 Burn of the L’Atelier Côte d’Or

The draw to the L’Atelier Côte d’Or also performed quite well. This was a draw that was not too close, nor too tight. I also found this to be a cigar that produced a nice amount of smoke production. Overall this was a low maintenance cigar to derive flavor from.

When the L’Atelier Côte d’Or first came out in the Spring of 2015, I found this to be a cigar that offered a lot in strength. I’ve had these cigars for this sample in my humidor since May, 2015. As a result of the time in my humidor, I have found the Côte d’Or had mellowed. This is a cigar I now found to be medium strength in the first half. By the second half, there was enough strength to push the strength level into medium to full territory.

The body of the cigar followed a similar path. I found the flavors started out medium-bodied and by the second half, the flavors had progressed into medium to full territory. Overall I found both the strength and body attributes balanced each other nicely.

At this point of time, the L’Atelier Côte d’Or is a cigar that is smoking better than it did 9 months ago. It’s a cigar that has some good flavors and it is complemented by some excellent construction. The fact this cigar mellowed a little very much worked in favor of this blend. For a higher premium offering cigar, I would expect it to have a “wow factor”. Unfortunately the Côte d’Or did not deliver that “wow” factor  As a result, I did find this to be somewhat of a shortcoming with this cigar. It’s still a cigar I’d recommend – particularly to a more seasoned cigar enthusiast; however this is a cigar I’d recommend trying one first.