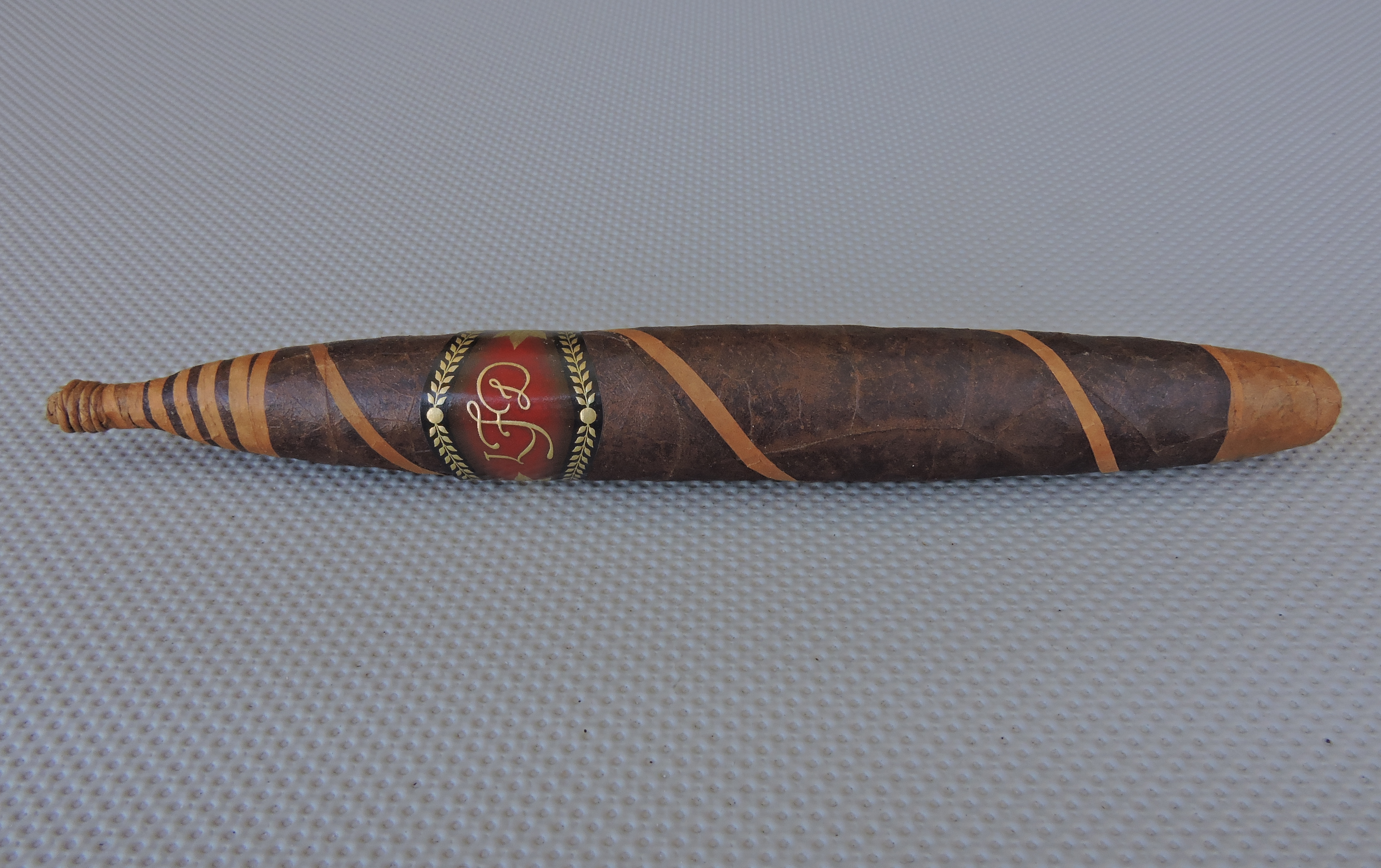 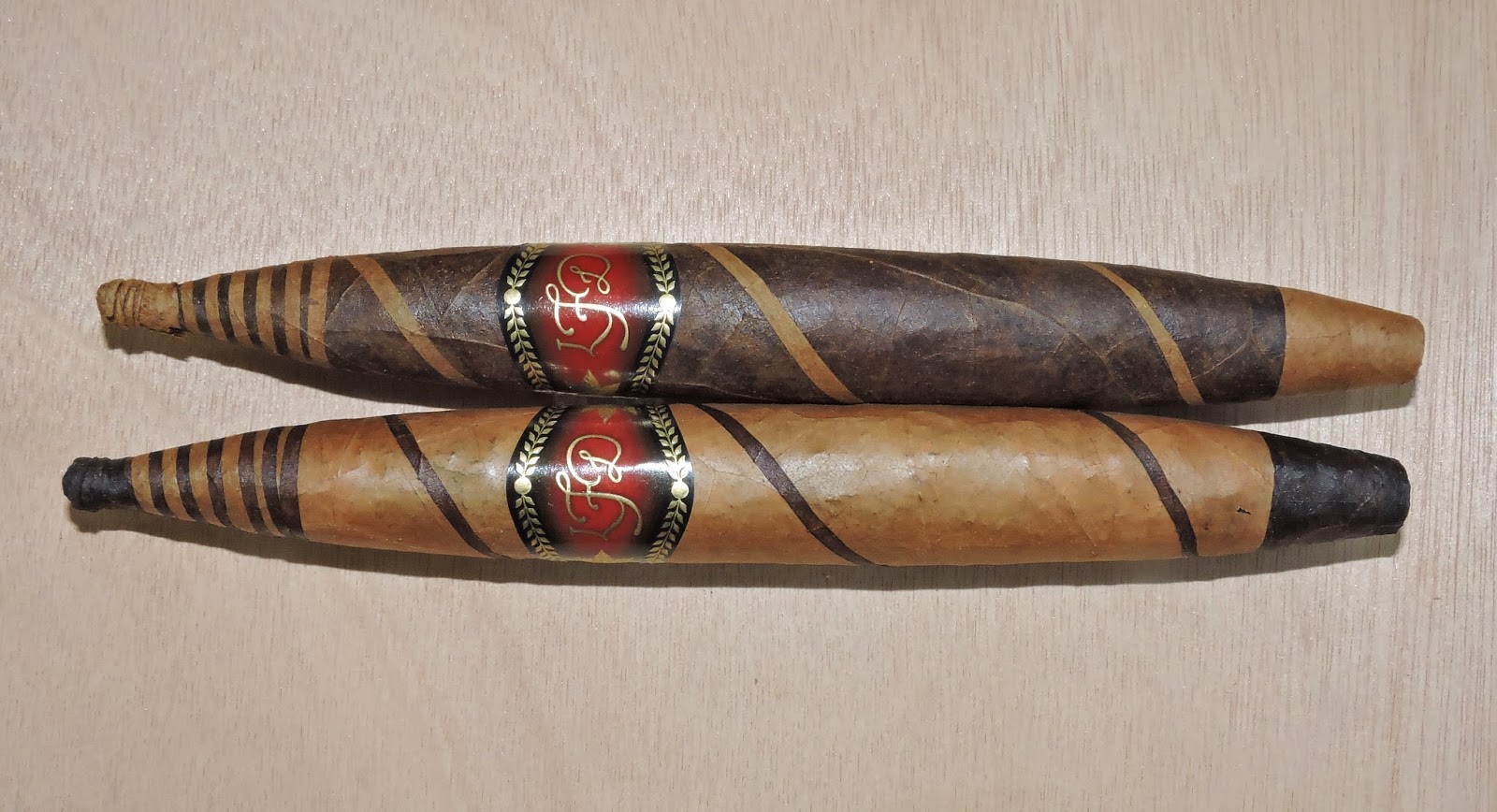 Without further ado, let’s take a closer look at the TCFKA M Collector’s Edition 2014 and see what this cigar brings to the table.

As with the previous two installments, the La Flor Dominicana TCKFA M Collector’s 2015 is a perfecto measuring 7 x 55.

The underlying wrapper of the TCKFA M Collector’s Edition 2015 is the Ecuadorian Sumatra Oscuro wrapper. It has a coffee bean color with a mahogany tint and a moderate amount of oil on that. Draped over the Sumatra s a thin light brown CT Shade wrapper. The way this barber-pole is arranged similar to the Collector’s Edition 2013 and 2014 editions. By the cap it is a very tight spiral wind. As it reaches the wider parts of the perfecto, it is arranged more more like a winding pinstripe. The foot of the perfecto is all Shade wrapped and looks almost like a pencil point, but with an open foot (this part is consistent with the other TCKFA M cigars). The cap is also unique as it has almost a “ball-like” shape.

The cigar has a single band on it. It is a classic LFD gold script logo with the burnt red and black background. It also has the standard LFD gold adornment for trim. On the left and right side of the band there is both a gold leaf and a gold medallion.

Prior to lighting up the TCFKA M Collector’s Edition 2015, I went with a straight cut. As I did with the previous installments, I cut a little past the ball cap to get a little more diameter on the draw.  Once the cap was removed, I moved on to the pre-light draw. The dry draw gave me mostly cream and wood notes.  Overall I didn’t consider this to be the most exciting pre-light draw, but given we don’t score the pre-light draw, there is no loss of points here. At this point, I was ready to light up my La Flor Dominicana TCFKA M Collector’s Edition 2015 and see what the smoking phase would bring to the table.

The start of the TCFKA M Collector’s Edition 2015 continued with more of the cream and generic wood notes that I detected on the pre-light draw. Meanwhile I picked up a cedar sweet-spice on the retro-hale. Once the cigar burned through the Connecticut Shade tip of the cigar, notes of cedar and natural tobacco sweetness surfaced. The cedar and natural tobacco took over as the main flavor. Meanwhile the cream notes receded into the background. At the same time, I also detected some black pepper in the background. The black pepper also displaced the cedar on the retro-hale.

As the TCFKA M Collector’s Edition 2015 moved into the last third, there was a sharp increase in the black pepper. The pepper joined the cedar in the forefront and in the last stages displaced the cedar. There still were some notes of natural tobacco, grass, and cream toward the end. This is the way the cigar experience came to a close. The resulting nub was soft to the touch, but cool in temperature.

During the early stages of the TCFKA M Collector’s Edition 2015, I found the cigar maintained a straight burn line. As the cigar reached the thicker ring gauge, I did find the burn meandered and this was a cigar that needed more frequent touch-ups.  The resulting ash wasn’t overly firm, but it wasn’t a loose flaky ash either. The ash had a darker salt and pepper color to it. Meanwhile the cigar maintained an ideal burn rate and ideal burn temperature. 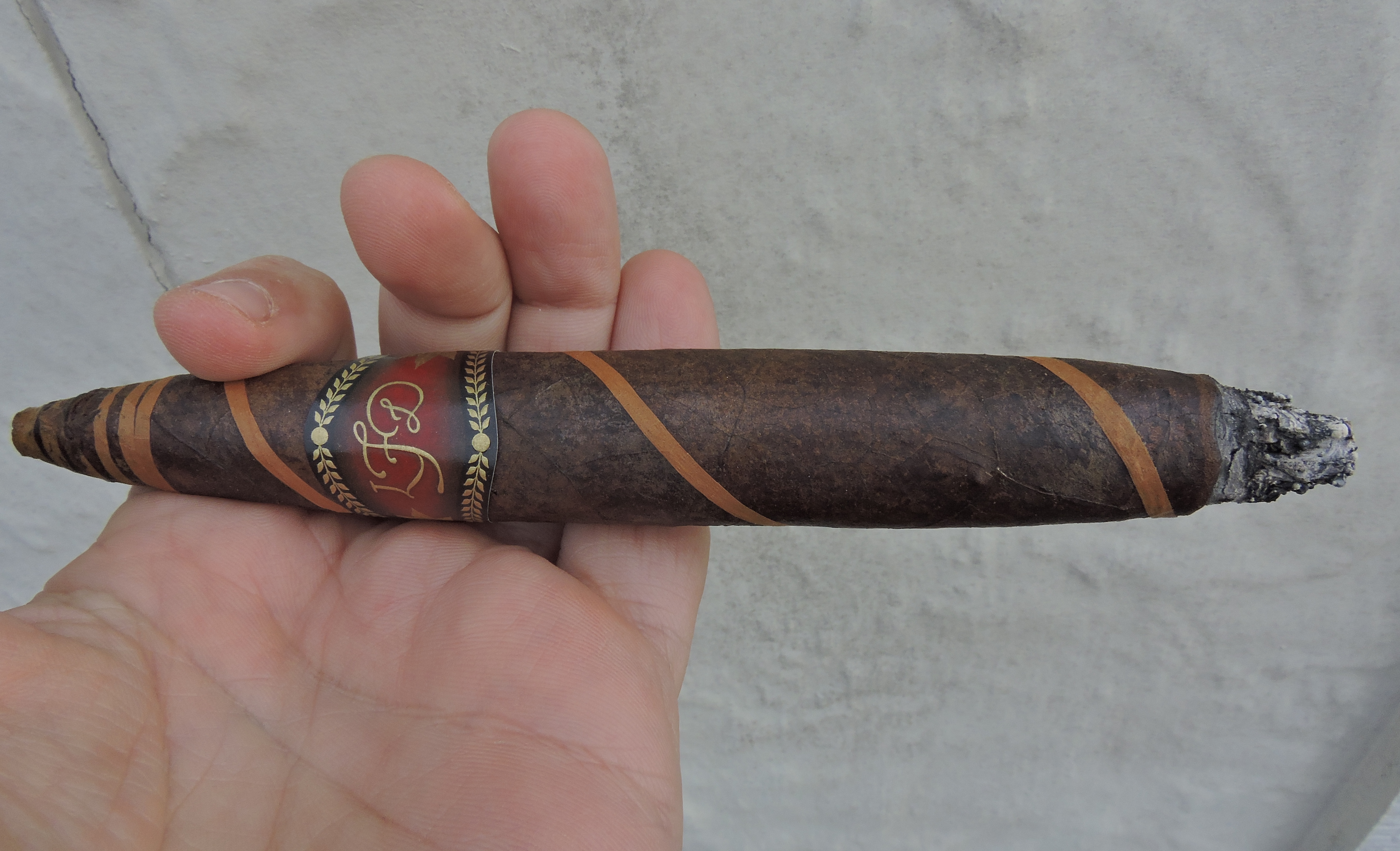 Overall I found the draw to the TCFKA M Collector’s Edition 2015 performed quite well. Considering I had a very small surface area where I snipped the cap, I found the cigar to be a low maintenance draw with just the right amount of resistance. I also found the cap area didn’t not get overly soft while puffing on the cigar.

Of the three installments of the Collector’s Edition, I found the TCFKA M 2015 to be the boldest. From a strength perspective, this cigar came right out of the gate with medium to full strength. The strength does build up along the way and by the second half, the cigar progressed to full strength. As for the flavors, I found them to be on the upper end of medium to full-bodied.  In terms of strength versus body, the TCFKA M Collector’s Edition 2015 I found the strength had the edge – particularly in the second half.

As I mentioned, each year I have found the TCFKA M Collector’s Edition cigars to be fun cigars to smoke.  While I still would prefer the 2013 and 2014 editions of the Collector’s Edition to the 2015, I still feel this is a cigar that has its place. I found the TCFKA M Collector’s Edition 2015 to fill the spot in this series as the quintessential La Flor Dominicana – namely a strong cigar with plenty of flavor and spice.  This provides a nice contrast to the milder 2014 edition and the medium plus 2013 edition. It’s a cigar I would definitely position to a more seasoned cigar enthusiast looking for something quite bold. As for myself, this is a cigar I would smoke again. This cigar is definitely worthy of a fiver – which pretty much puts you into a box of these.