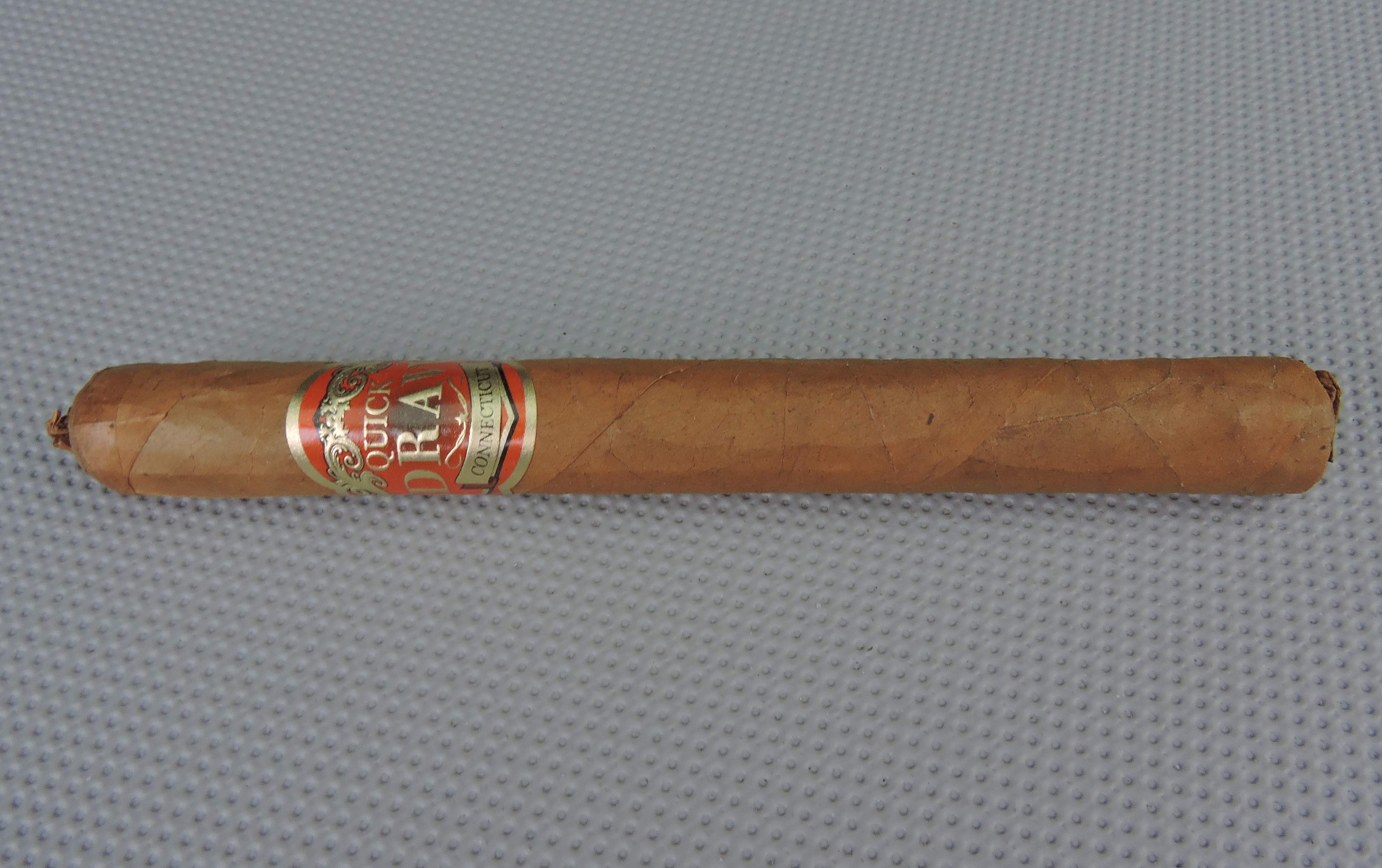 Without further ado, let’s break down the QuickDraw Connecticut Short Panatela and see what this cigar brings to the table.

The Connecticut wrapper is an Ecuadorian-grown one. The remainder of the blend is all Nicaraguan incorporating tobaccos from the Ometepe, Esteli, and Condega regions.

The QuickDraw Connecticut is offered in two sizes:

The band of the QuickDraw Connecticut is a variation of what is found on the other cigars in the QuickDraw line. The band is highlighted by text “QUICK DRAW” is in gold font over a orange background. The color of that background is slightly darker at the center. Below the text is a gold ribbon-like design with the text “CONNECTICUT” in thin dark font. There are gold adornments going around the band. To the left and right is the text “Hand Made” – also in white font on a yellow / orange background.

As opposed to pulling off the pig-tail cap of the QuickDraw Connecticut Short Panatela, I opted to place a straight cut to remove the cap. Once the cap was clipped off, I moved on to the pre-light draw. The cold draw delivered a classic Ecuadorian Connecticut profile of cream and wood notes. Overall, I considered this to be a satisfactory pre-light draw. At this point I was ready to light up the QuickDraw Connecticut Short Panatela and see what this cigar would have in store.

The QuickDraw Connecticut Short Panatela started out with a notes of white pepper, cream, and classic wood. The pepper notes quickly subsided and dissipated. I found the cream notes became primary early on while the classic wood notes moved to the background. In addition to the classic wood notes, there was also a slight cedar sweetness in the background on the tongue. Meanwhile there was a cedar sweet-spice present on the retro-hale.

Later in the first third, the classic wood notes began to increase and by the start of second third, the wood was on par with the cream notes in the forefront. The subtle cedar notes remained in the background, but started to increase. I also detected a citrus component provided some subtle bitter notes.

The last third saw the cedar notes firmly in control.  There was still a touch of cream and citrus in the background. This is the way the QuickDraw Connecticut Short Panatela came to a close. The resulting nub was firm to the touch and cool in temperature.

The QuickDraw Connecticut Short Panatela is a well constructed cigar and this was reflected nicely on the burn and draw. I found this cigar maintained a straight burn path from start to finish. The burn line had some occasional curviness to it, but overall I found the to be a low maintenance burn. The resulting ash was a silvery gray with some dark speckling to it. This ash was a tight, firm one – and one that came off the cigar in clean chunks. Meanwhile the burn temperature was ideal. While the QuickDraw line is designed to be 30 minutes, I found this to be a 40 to 45 minute smoke – and this is what I still considered ideal for this cigar. 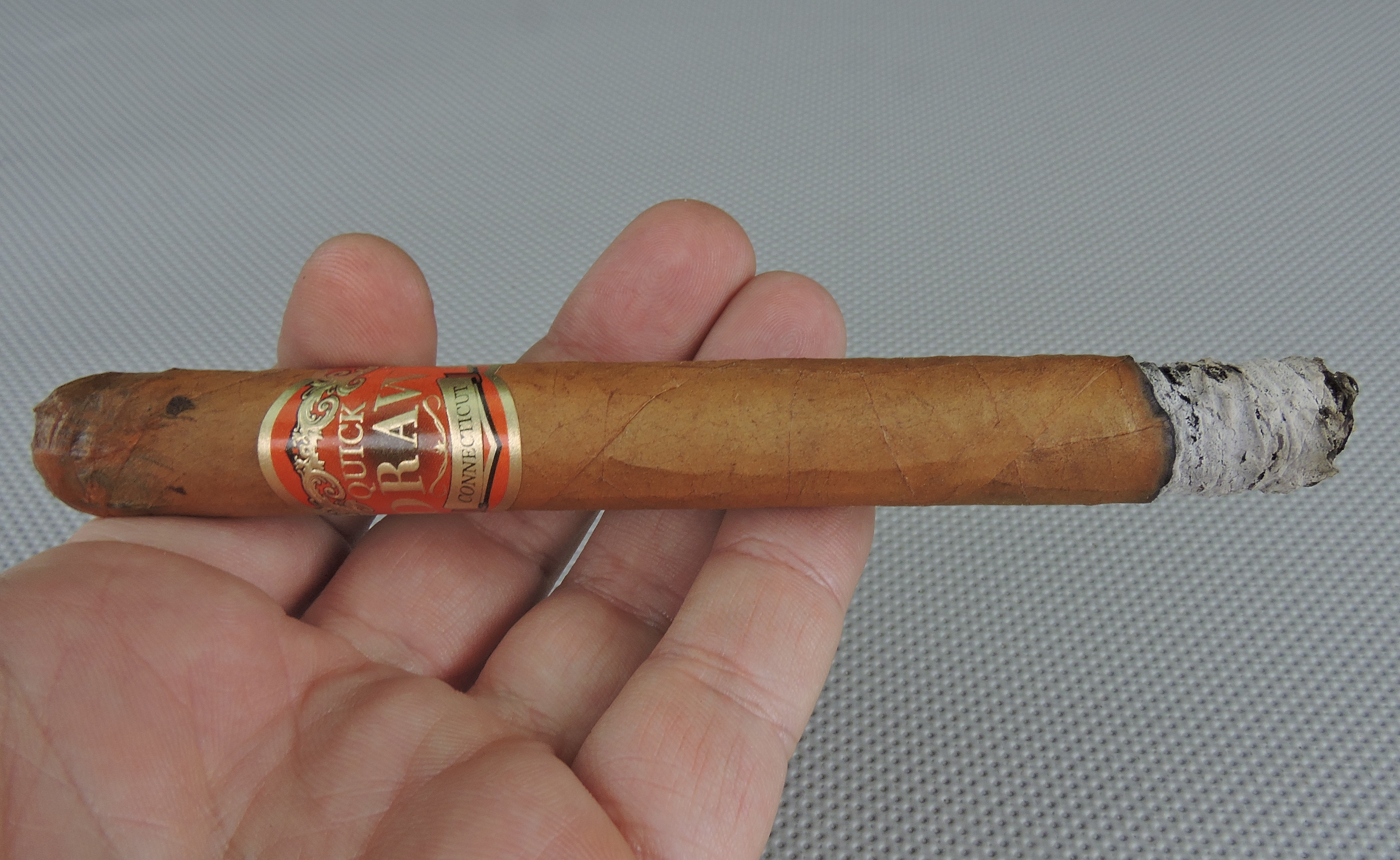 Keeping to the company’s reputation, the cigar had a flawless draw. I found the draw to be not too tight, nor too loose. I also found this small cigar produced a nice amount of smoke production.

From a strength and body perspective, I found the QuickDraw Connecticut Short Panatela to be in the wheelhouse of what I would expect a Connecticut Shade cigar to be. Both the strength and body started out in the mild to medium range. Both attributes increased gradually throughout the smoking experience. By the end of the cigar, I still assessed both attributes as mild to medium.

In terms of strength versus body on the QuickDraw Connecticut Short Panatela , I found both attributes balanced each other nicely – with neither attribute overshadowing the other.

When it comes to Connecticut Shade cigars, I find it is often difficult to find good ones in large ring gauges (54+) and small ring gauges (44-). With the Short Panatela format of Southern Draw Cigars’ Quick Draw Connecticut, I found this cigar delivered quite well – and delivered a nice satisfying smoke. In terms of strength, body, and flavor, I found this to be Connecticut Shade cigar more on the traditional side. While I didn’t do a Cafe Cubano pairing, I can certainly see how this cigar would pair well with it. This is a cigar I’d recommend to either the experienced or novice cigar enthusiast as an any time of the day smoke. As for myself, this is a cigar I’d smoke again – and one that is worthy of a box split.