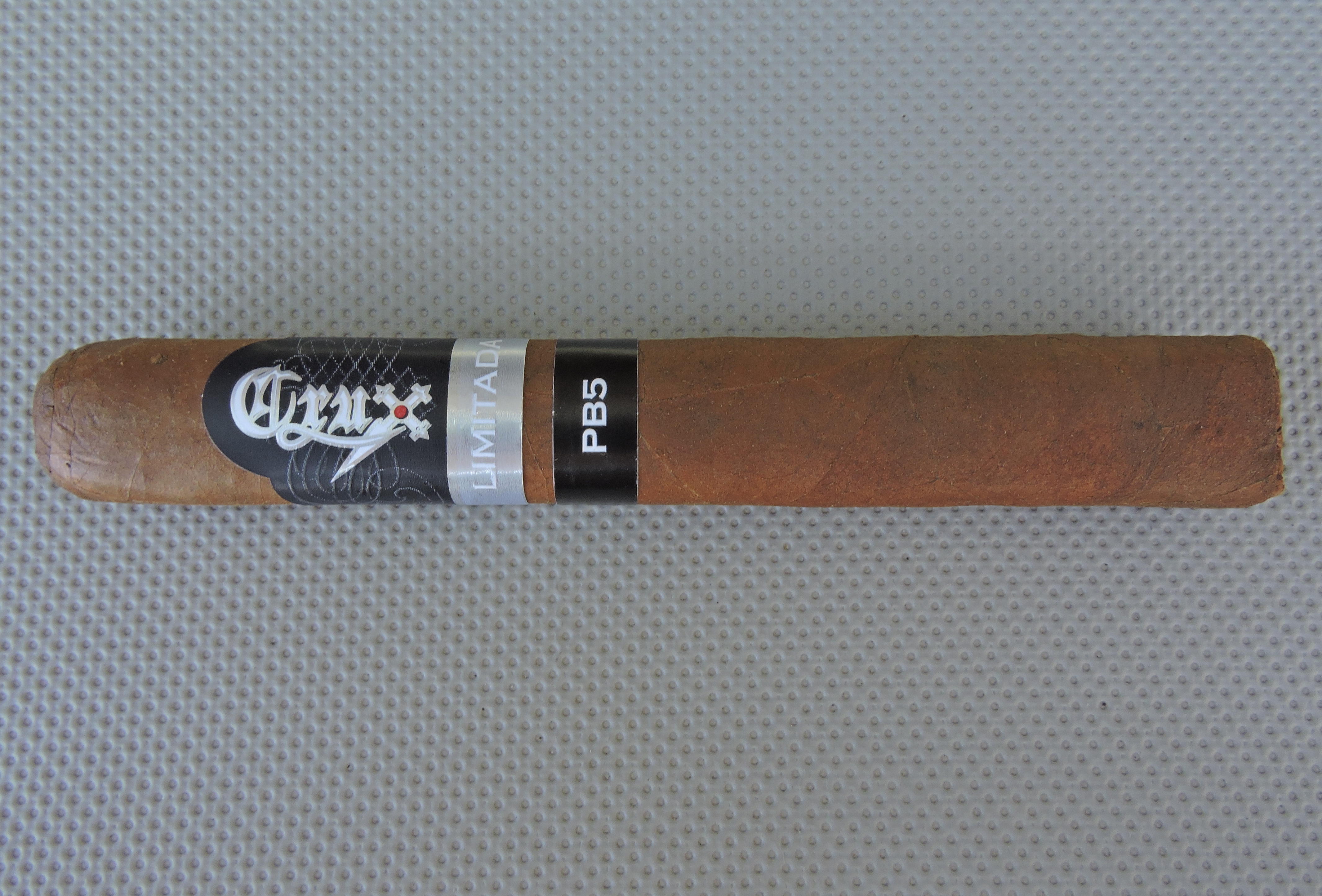 Just prior to the 2015 IPCPR Trade Show, Crux Cigar Company announced a new line known as the Crux Limitada PB5. Since launching in 2014, Crux has built an impressive portfolio of blends. For those keeping score, the Limitada PB5 is the ninth blend to be released by Crux. Up until this point, the previous eight releases have been regular production offerings. However, as the name indicates; the Crux Limitada is a limited edition offering – the first limited offered by Crux.  While the cigar was announced last year, it is only in the last few weeks that this cigar has begun to surface at retailers. Recently I’ve had an opportunity to smoke the Crux Limitada PB5. As mentioned, Crux has built up a very nice portfolio – and the release of the Limiteda PB5 keeps to the company’s impressive run. In a nutshell, this cigar is in the upper echelon of Crux releases to date.

The genesis of the Crux Limitada PB5 stems from when the company secured a special wrapper known as Enganoso. Since there was a finite supply of this wrapper, Crux decided to go the route of releasing a limited blend incorporating this wrapper.

Crux has also said there will be more Limitada cigars released down the road. These future releases will vary in blend.

Without further ado, let’s break down the Crux Limitada PB5 and see what this cigar brings to the table.

The Enganoso wrapper of the Crux Limitada PB5 is a Nicaraguan grown wrapper from the region of Esteli. In addition, there is a Connecticut Broadleaf blinder and an undisclosed filler consisting of five different tobaccos. As with all Crux cigars, the PB5 is produced at the Placencia factory in Esteli.

The Crux Limitada PB5 is vailable in one size – a 5 3/4 x 54 Cuban Style box-pressed Toro Extra. The cigars are packaged in 10 count boxes and a total of 500 boxes were made.

The Crux Limitada PB5’s Enganoso wrapper has a medium brown color to it. The wrapper has a slight sheen of oil on the surface. While there are some thin visible veins and thin visible wrapper seams, this is a wrapper that I would categorize as smooth.  The Cuban style box-press is what I would categorize as  “soft box press”.  The box-press is firm with no soft spots.

There are two bands on the band to the Crux Limitada PB5. The primary band is black on the upper portion and silver on the lower portion. In landscape mode is the white and red Crux logo on the black background section. There are also some silver designs on this portion of the band. On the far right of the band (going around the back) is a black, white, and red “crusader-like” dagger. On the silver portion is the text “LIMITADA” in white font (not in landscape mode).

The secondary band rests below the primary band. It is black in color with the text “PB5” in white.

Prior to lighting up the Crux Limitada PB5, I went with a straight cut to remove the cap. Once the cap was successfully removed, I moved on to the pre-light draw. The dry draw delivered a mix of cocoa, earth, and citrus. Overall I considered this to be a satisfactory pre-light draw. At this point I was ready to light up the PB5 and see what the smoking phase would have in store.

The Crux Limitada PB5 started out with a mix of cocoa, earth, and a red / white pepper combination. Very early on, the cocoa and earth moved to the forefront while the pepper settled in the background. In these early stages a subtle raisin sweetness also surfaced in the background. Meanwhile, the red pepper was prominent, yet not overpowering on the retro-hale.

By the midway point, the earth and mineral component remained in the forefront. The cocoa receded into the background with the raisin and pepper notes. The combination of the cocoa, raisin, and pepper balanced out the notes in the forefront nicely. During this stage of the smoke, the red / white pepper combination began to increase.

By the last third, I found the pepper closed in on the earth and mineral notes in the forefront. While there was an increase in spice, it never became overpowering,. Meanwhile there still was some raisin and cocoa in the background continuing to balance things out. This is the way the cigar experience came to a close. The resulting nub was firm to the touch and cool in temperature.

In terms of its burn, the Crux Limitada PB5 score quite well. While there was a slight jaggedness from time to time on the burn line, this was a low maintenance burn. The burn maintained a straight burn path and did not require excessive touch-ups. The resulting ash had a salt and pepper color. For the most part, this was an ash that was on the firmer side. Both the burn rate and burn temperature were ideal.

Burn of the Crux Limitada PB5

The draw to the PB5 was also outstanding. This is what I would categorize as an open (as opposed to loose) draw. Overall, this was a low maintenance cigar to derive flavor from.

In terms of strength, I found the PB5 to be medium. For the most part I found the strength level did not vary all that much from start to finish. When it came to the body of the cigar, I also found the PB5 started out in the medium range. There was a gradual increase in body and by the last third, I found the PB5 was delivering a medium to full-bodied cigar.

When looking at strength versus body on the PB5, I gave a slight edge to the body.

There was a lot to like with the Crux Limitada PB5. This is a cigar that had great flavor, excellent construction, and was well-balanced. While normally a mineral component doesn’t do it for me in a flavor profile, it works quite well with this blend – namely because the flavors balance each other so well. It also gave this cigar a uniqueness to it – something I would expect with a special wrapper that is a limited edition.

Crux has delivered some excellent releases since launching in 2014 and the PB5 stands in the upper echelon. It’s a cigar I could recommend to any cigar enthusiast. It’s one that I think has some long-term aging potential. It’s easily one I’d smoke again and it’s worthy of a box purchase.