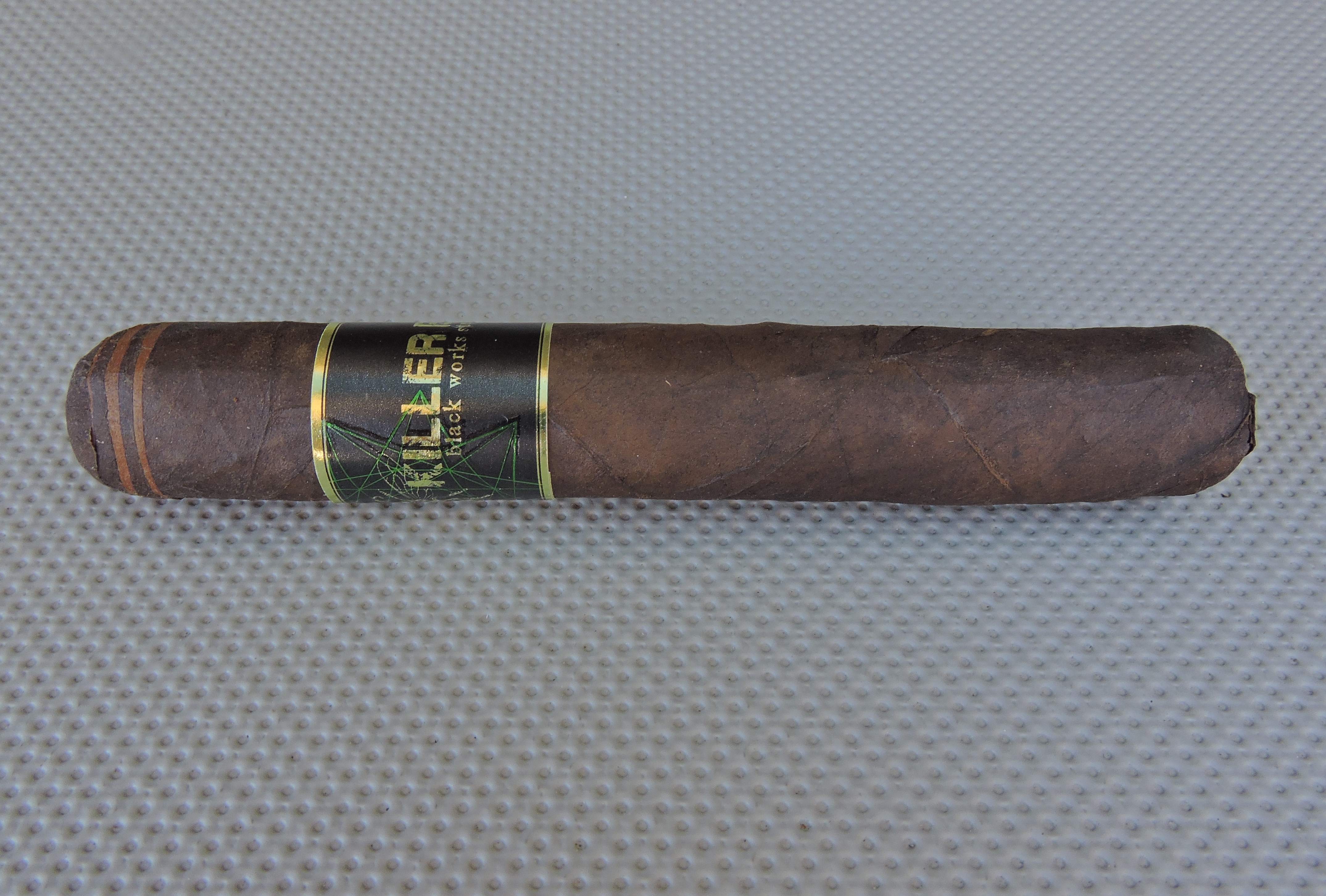 In addition to the move to the new factory, the BLTC and Black Works Studio brands have strengthened things on the distribution end of the business. Earlier this year, it was announced that Boutiques United would handle distribution. Meanwhile, the company has also appointed a National Sales Manager to oversee its distribution in the U.S.

Without further ado, let’s break down the Black Works Studio Killer Bee and see what this cigar brings to the table.

Maduro wrappers are quite common out of the BLTC brand, but at press time this is currently the only wrapper designated as maduro in the Black Works Studio brand.

The Ecuadorian Maduro wrapper of the Killer Bee has a classic chocolate-brown color. There is some oil on the surface of the wrapper. Overall this was a smooth wrapper with well-hidden wrapper seams. The cap features what is called a “signature linear cap” which basically has thin natural tobacco colored rings accenting it. In addition, the Killer Bee features a closed foot.

The band to the Black Works Studio is black in colored accented with gold trim. The name “KILLER BEE” appears in large gold font. Just below the text is the text “BLACK WORKS STUDIO” in smaller gold font. To the left of the text is a large gold-colored bee sitting on what appears to be a metallic green “hornet’s nest-like” design.

Prior to lighting the Killer Bee, I went with my usual choice of a straight cut. Given the linear rings on the cap, this actually helped me use this as a guide to remove the cap. Once the cap was removed, I proceeded with the pre-light draw. The dry draw delivered a mix of earth, chocolate, and some lemon notes. Overall I considered this to be an excellent pre-light draw. At this point I was ready to light up the Black Works Studio Killer Bee and see what the smoking phase would have in store.

The Killer Bee started spurt of black pepper. The black pepper quickly subsided and notes of wood and chocolate as well as a slight lemon note surfaced. I also found the black pepper to be present on the retro-hale.

During the first third I found the cocoa and wood notes to be the primary notes. Both notes alternated in intensity as to which had the edge. The pepper notes became a close secondary note with the lemon notes much more distant.

By the last third, I found the wood notes remained primary. The pepper increased and returned to being a close secondary note. Meanwhile, the combination of the cocoa and lemon remained further in the background. While the pepper increased at the end, I found it didt overpower the cigar. This is the way the cigar experience of the Killer Bee came to a close. The resulting nub was firm to the touch and cool in temperature.

Overall I found the burn to the Killer Bee to perform quite well. The cigar maintained a relatively straight burn path. There was a slight curviness on the burn line, but this was more cosmetic in nature and was easily remedied with some touch-ups. I didn’t find the amount of touch-ups need to be excessive. The resulting ash was a silver-gray color with some darker speckling mixed in. For the most part the ash remained on the firm side (the photo below shows a slight looseness, but this was an isolated case as it didn’t become a flaking problem). Meanwhile the burn rate and burn temperature were both ideal. 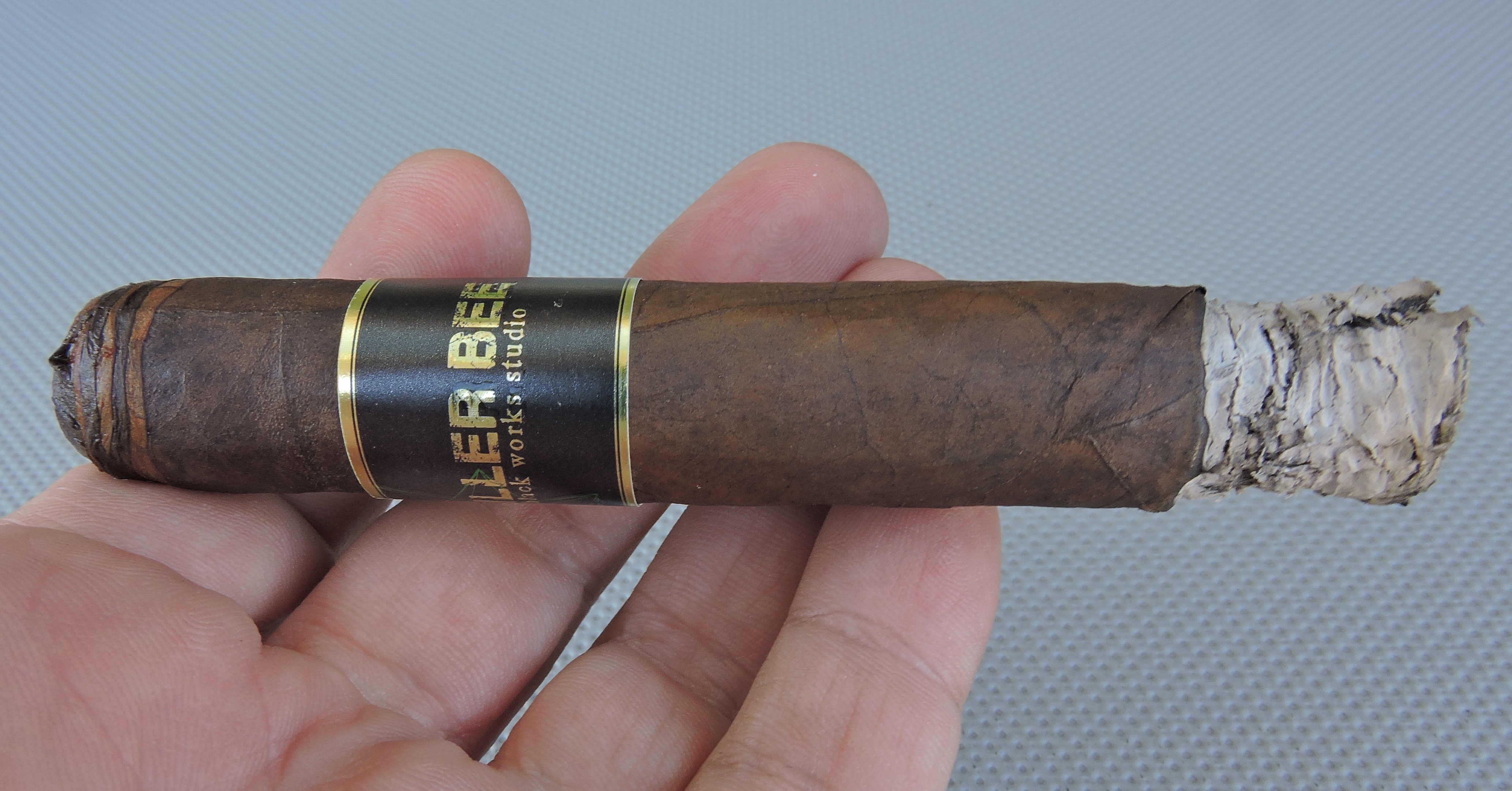 As for the draw, I found the Killer Bee to have a slight bit of resistance to it – which is something I like. Overall this was an enjoyable cigar to puff on.

Overall I’ve been impressed with the offerings from James Brown and company out of BLTC. I really like what he is doing with the Black Works Studio brand from both a packaging and blend standpoint. Brown has released a lot of excellent maduros under the BLTC brand, but in my book the Killer Bee might be his best one. This is one that excels in the category that most matters – flavor. Because this cigar has somewhat of a kick from strength and body standpoint, I’d probably steer this to a more seasoned cigar enthusiast. As for myself, this one easily qualifies as a box worthy cigar.