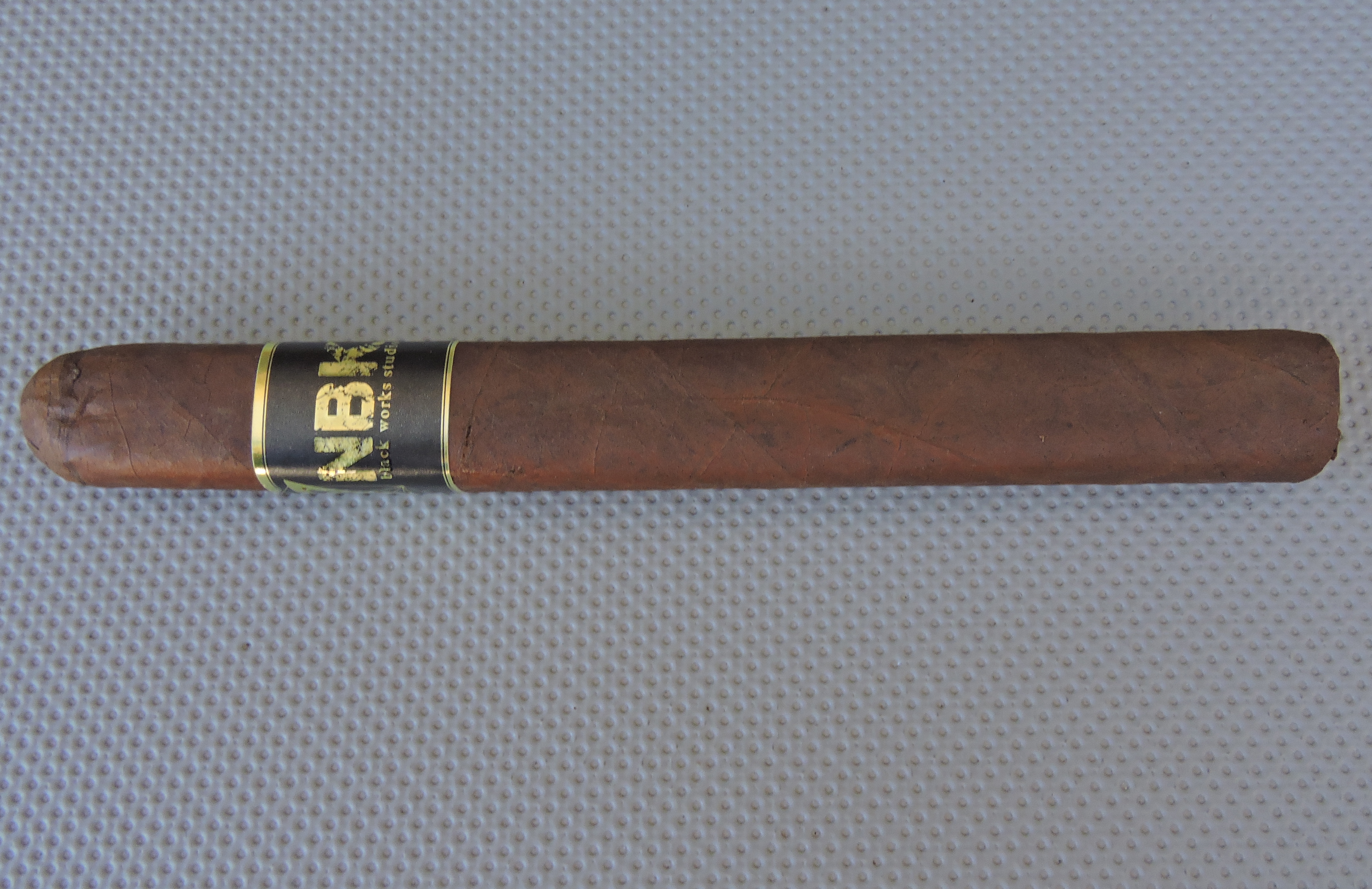 2015 was a big year for James Brown and Black Label Trading Company (BLTC). First Brown moved his production into his company’s own production factory, Fabrica de Oveja Negra.  Late last year, Brown announced he was forming a whole new brand that would be separate from BLTC known as Black Works Studio. When Black Works Studio was announced Brown explained that he had considered cigar making an art form and the launch of Black Works Studio gave him another expression of what he could do as a cigar maker and brand owner. Today we take a look at one of the cigars launched with this new brand, the Black Works Studio NBK. Overall, I found the NBK to be an excellent cigar and one that gets Black Works Studio off to a nice start.

In addition to the move to the new factory, both BLTC and Black Works Studio have also entered into an agreement where Boutiques United (formerly known as House of Emilio) will handle the distribution for both brands.

Without further ado, let’s take a closer look at the Black Works Studio NBK and see what this cigar brings to the table.

Black Works Studio NBK is available in one size – a 6 x 46 box-pressed Corona Larga. The cigars are packaged in 20 count boxes.

The Ecuadorian Habano Oscuro wrapper of Black Works Studio NBK has a chocolate brown color. There is a colorado tint on the wrapper that varies in intensity depending on how the light shines on it. Upon closer examination, some darker marbling can be seen on the wrapper’s surface. The wrapper has a silky smooth complexion that is almost void of veins and wrapper seams. The footer to the NBK is covered. I also found the box-press of the NBK to be firm.

The band to the NBK has a contemporary feel consist with the Black Works Studio line. The band has a black background with gold trim on the top and bottom. In a large gold contemporary font is the text “NBK”. Just below that text is the text “black works studio” in smaller gold font.  To the left of the text is a modern-styled gold design.

As I normally do, I placed a straight cut to remove the cap of the Black Works Studio NBK. Once the cap was clipped, I proceeded with the pre-light draw. The dry draw of the NBK provided notes of chocolate, but there also were some generic wood notes and a slight cedar sweet-spice. Overall I considered the pre-light draw of the NBK to be satisfactory. At this point I was ready to light up the Black Works Studio NBK and see what the smoking phase would have in store.

The start to the Black Works Studio NBK continued with the chocolate notes I got from the pre-light draw. In the background, there were notes of earth and spice. The spice seemed to be a combination of red pepper and cedar. I also found the combination of pepper and cedar to be present on the retro-hale. The spice had a slight lingering effect on the tongue and while it was also on the sharper side on the retro-hale.

During the first third, there was a also a nut component that accompanied the chocolate notes in the forefront. Meanwhile the earth and spice notes remained in the background.

By the second third I found the earth notes joined the chocolate notes in the forefront. The chocolate still very much had the nut component to it. As for the spices, the cedar spice had a slight edge over the pepper in the background. The spices were still sharp on the retro-hale.

By the latter part of the second third, I found the earth notes became primary. The chocolate/ nut flavors began to recede. At the same time, there was a slight increase in both the cedar and pepper spices.

By the last third, the spices moved into the forefront. I still found much of the spice of this cigar was delivered through the retro-hale. Toward the end, the chocolate and nut notes dissipated. This is the way the smoking experience came to an end. The resulting nub was slightly soft to the touch and cool in temperature.

I found the Black Works Studio NBK to be a well-constructed cigar and this reflected nicely on the burn and draw. The NBK maintained a relatively straight path on the burn. There was a slight curvature on the burn line, but this was a cigar that was never in danger of tunneling or canoeing. The resulting ash was a very light gray. I found the ash itself to be firm on the firm side. The ash also came off the cigar in clean chunks. I also found both the burn rate and burn temperature to be ideal. 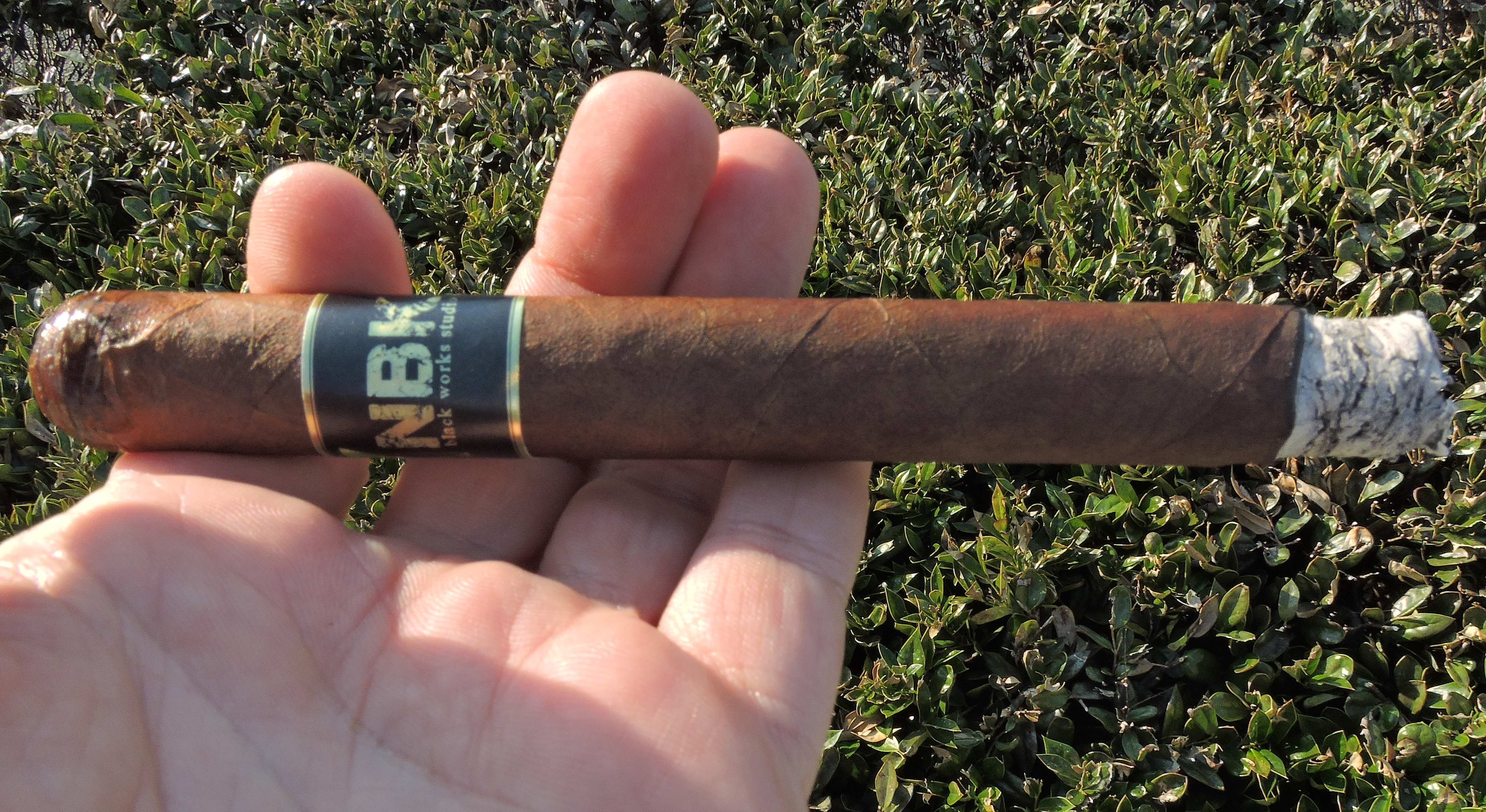 As for the draw, I found it was not too tight, nor was it too loose. The NBK was a low maintenance cigar to derive flavors from.

From a strength perspective, I found the NBK had just enough kick to be considered medium to full. As for the body, when you factor in the retro-hale, this is a full-bodied cigar. If you aren’t one to retro-hale, you might consider this cigar to be more medium to full-bodied. In terms of strength versus body, this is a cigar where I found the body had a significant edge.

As I mentioned up-front, I found the NBK to be an excellent offering by Black Works Studio.  Given that Black Works Studio is packaged as a brand geared toward the contemporary cigar enthusiast, I was pleased to find the flavor profile of the NBK easily satisifies today’s modern cigar smoker. At the same time, the NBK can also appeal to someone who enjoys a more classic profile.