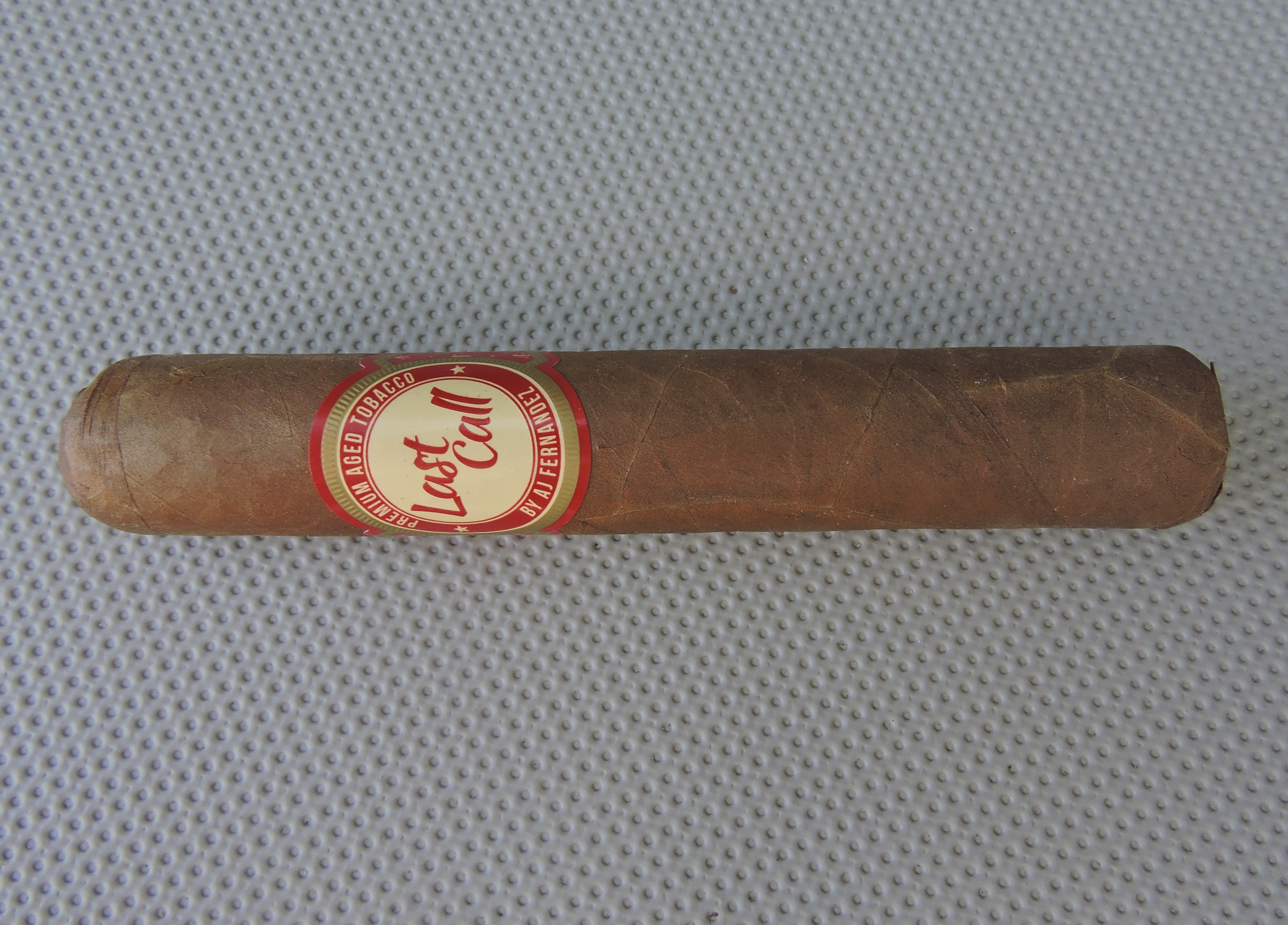 We now turn our attention to the A.J. Fernandez Last Call Geniales and see what this cigar brings to the table.

The A.J. Fernandez Last Call Geniales is available in one size – a 4 1/2 x 48 Rothschild size. The cigars are packaged in 25 count boxes. 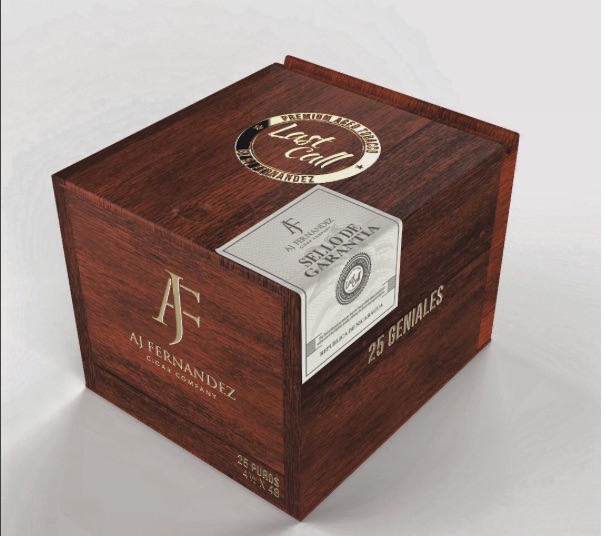 The Ecuadorian Habano Rosado wrapper of the Last Call had a medium brown color with some colorado red mixed in. Depending how the light shines on this cigar determined how much of the colorado hue is visible on the wrapper. The surface of the wrapper also featured a light coating of oil on it. There are some visible veins while most of the wrapper seams are well hidden.

The band of the A.J. Fernandez Last Call features a pale yellow circular field with the text “Last Call” in a semi-cursive bright red font. A bright red ring surrounds the circular field. On the upper portion of the ring is the text “PREMIUM AGED TOBACCO” in pale yellow font. The lower part of the ring has the text “BY AJ FERNANDEZ” – also in pale yellow font. A gold ring with red trim surrounds the red ring with the text on it. The left and right side of the band have a bright red background with gold and red trim. On that red background are small gold AJF (A.J. Fernandez) logos surrounded by a diamond-shaped border and arranged in a wallpaper mode. On the far right is a larger AJF logo in red font on a gold circle which is used for the band fastener.

Prior to lighting up the A.J. Fernandez Last Call Geniales, I went with my usual choice of a straight cut. Once the cap was successfully removed, I moved on to the pre-light draw phase. The dry draw delivered a mix of nut and cedar as well as some mint and floral notes. Overall I considered the pre-light draw of the Last Call to be satisfactory. At this time I was ready to light up this cigar and see what the smoking phase would have in store.

During the second half, the red pepper notes increased while the natural tobacco notes diminished. By the beginning of the final third, the red pepper and cedar was in the forefront while the natural tobacco and nut flavor was in the more distant background. This is the way the Last Call Geniales came to a close. The resulting nub was firm to the touch and cool in temperature.

Overall the burn performed well on the A.J. Fernandez Last Call Geniales. From time to time, there was some jaggedness and some slight unevenness, but this was remedied with some touch-ups. In terms of the amount of touch-ups, I did not find the Last Call Geniales required an excessive amount of touch-ups. The resulting ash was firm with a  silver gray color. As for the burn rate and burn temperature, both were ideal. 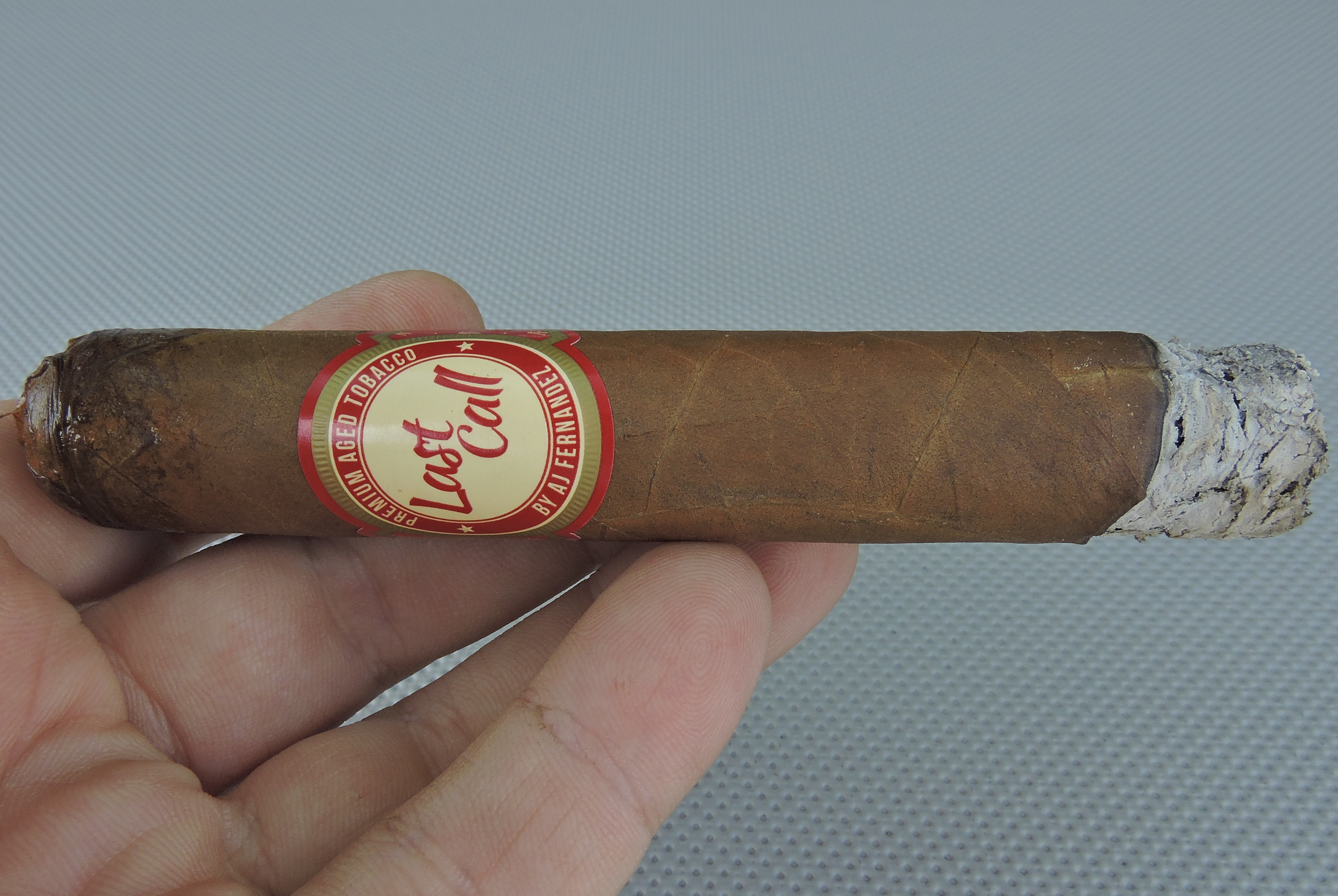 The draw to the Last Call Geniales performed quite well. There was a slight amount of resistance to it  – which is something that I consider a positive. Overall, this made for an excellent draw from start to finish.

Overall I found the  A.J. Fernandez Last Call Geniales to be quite a satisfying cigar experience. I’ve had these cigars for about eight weeks and during this time I have seen them age well and get better over time. I’m not ready to put it up with New World or Enclave yet, but the cigar still holds its own. It’s also hard to ignore the fact that Last Call has a retail price at $5.00 per cigar.  If this was an unbanded cigar and I had to guess the price, I would probably have never said $5.00 because it smokes like a cigar of more value. This is a cigar I would probably steer more toward an experienced cigar enthusiast, but its a great cigar for a novice to “graduate” to something medium plus. As for myself, it’s a cigar I’d smoke again and it’s worthy of a fiver in your humidor.