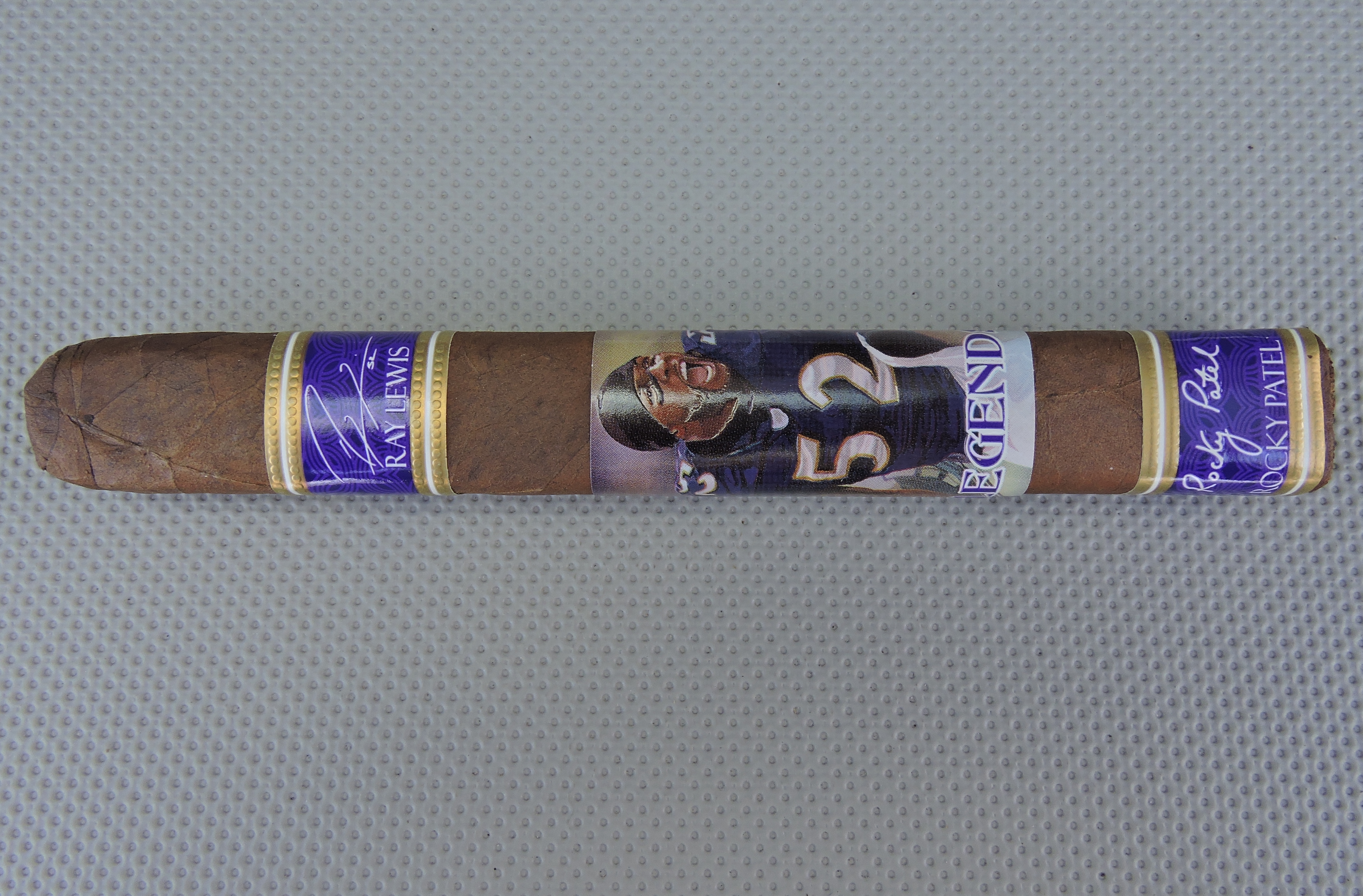 Lewis is the third sports celebrity to have a cigar branded for him by Rocky Patel. In 2012, Gary Sheffield kicked off the series with the release of the Rocky Patel HR500. Later that year, former NHL Hall of Fame goaltender Bernie Parent received a full line called the BSB No. 1 by Bernie Parent,which as been offered on a limited basis in the Philadelphia region. In 2013, a second cigar for Sheffield was created.

Lewis played 17 seasons in the NFL as an Inside Linebacker – all for the Baltimore Ravens from 1996-2012. During his career he won two Super Bowl rings. The cigar gets its named from Lewis’ #52 he wore with the Ravens.

Without further ado, let’s take a look at the Ray Lewis Legends 52 and see what this cigar brings to the table.

The Ecuadorian Habano wrapper on the Ray Lewis Legends 52 has a medium brown color. Depending on how the light shines on the cigar, it may give off a slight rosado tine. Upon closer examination there was some darker marbling. Any veins that were visible were on the thiner side. Most of the wrapper seams were well hidden. This is a somewhat flatter style box-press that had no soft spots. 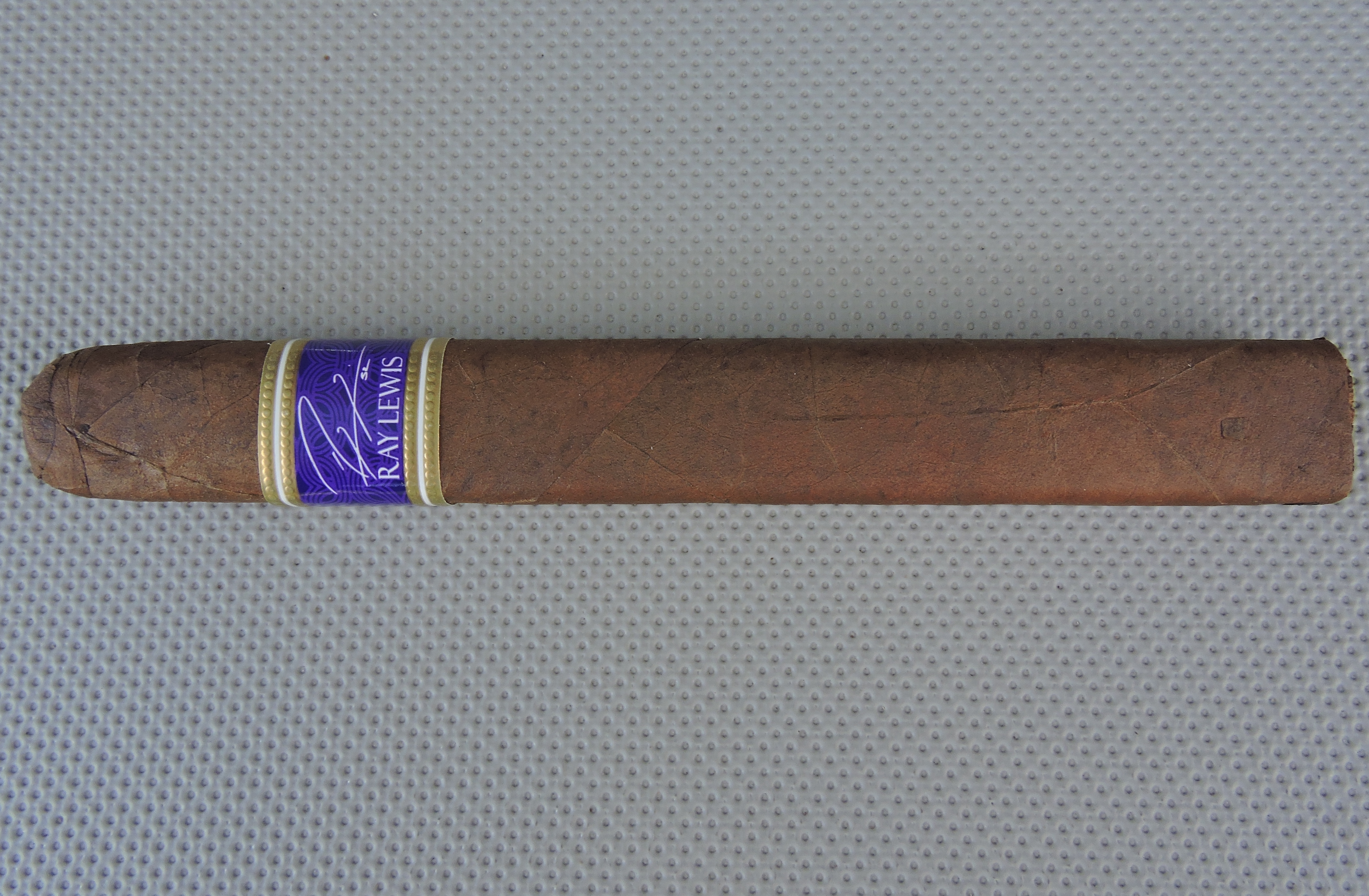 There are three bands on the Ray Lewis Legends 52 cigar. The primary cigar is purple with gold and white trim across the top and bottom. On the band is Ray Lewis’ signature in white cursive font. Just below that is the text “RAY LEWIS” – also in white font.

There is a footer band that has the identical purple, gold, and white color scheme. On that band is Rocky Patel’s signature in the text “Rocky Patel” below it.

There is a third band that is positioned near evenly between the two bands. On that band is a portrait of Lewis (see below). On the lower part of that band is the text “LEGENDS 52” in large purple font with white trim. 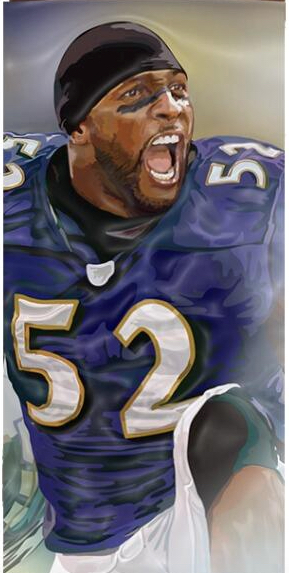 As I normally do, I went with my usual choice of a straight cut to remove the cap of the Ray Lewis Legends 52. Once the cap was removed, I moved on to the pre-light draw phase. The dry draw delivered a mix of earth, fruit, and a slight floral note. Overall I considered the pre-light draw to be satisfactory. At this point I was ready to light up the Ray Lewis Legends 52 and see what the smoking phase would have in store.

The Ray Lewis Legends 52 started out with a mix of wood and natural tobacco notes. As the flavor profile evolved, the wood notes became primary. The natural tobacco moved into the background where it was joined by a light fruit note and some baker’s spice. There also was a floral note present on the after-draw. Meanwhile on the retro-hale, I detected some prominent cedar notes.

As the Ray Lewis Legends moved into the second third, I found both the fruit and baker’s spice notes made their way into the forefront from time to time. While these notes seemed to rotate in and out, the wood notes remained a constant in the forefront. Meanwhile natural tobacco notes remained in the background, and I still got the floral note on the after-draw.

By the final third, I found the Ray Lewis Legends 52 was delivering a combination of baker’s spice and wood. The pepper notes were now a closer secondary note and the fruit sweetness was more distant. This is the way the cigar experience came to a close. The resulting nub was cool in temperature, but slightly soft to the touch.

The Ray Lewis Legends 52 scored very well on the draw. The cigar maintained a straight burn path from start to finish. The burn line had some occasional curvature or a slight amount of jaggedness from time to time. This didn’t prove to be a frequent problem and didn’t result in what I would term an abnormal amount of touch–ups. The resulting ash had a salt and pepper color. I found the ash to be on the firmer side and not prone to any significant flaking. Meanwhile the burn rate and burn temperature were both ideal. 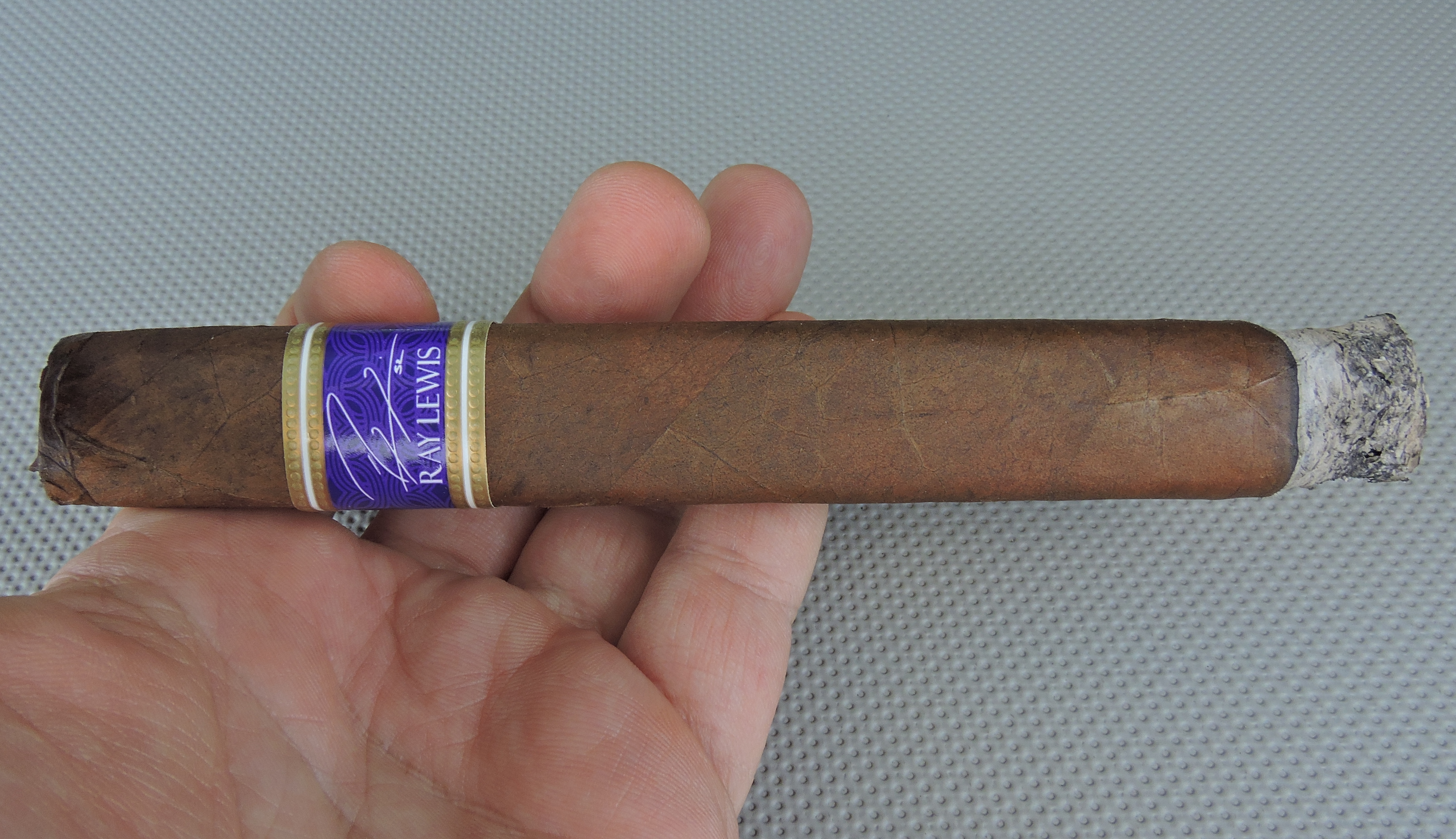 The draw of the Ray Lewis Legenda 52 also performed quite well. I found this cigar to have an open, but not loose draw. Along the way, I also found that this cigar produced an ample layer of smoke.

While this is a cigar blended for an all-pro Football player, one thing that might surprise you is that this is not a powerhouse of a cigar. At a strength level, the Ray Lewis Legends 52 is actually going to start out in the mild to medium range. By the second third, the strength progressed into the medium area of the spectrum where it remained for the duration of the smoking experience. Body-wise, I found the Ray Lewis Legends 52 to be in the medium range. The retro-hale actually amps up the body on this cigar and there were a few times I thought this cigar was heading to medium to full.

Overall the Ray Lewis Legends 52 was a very nice cigar. This is one of those cigars that I felt worked quite well because it wasn’t a powerhouse. The mostly medium profile seemed ideal for this cigar’s flavor profile. At the same time, this cigar certainly was not short of flavor. I liked how both the sweet and spice notes complemented each other very nicely. I think its good for the industry to have an NFL player have his name on a cigar with a name like Rocky Patel Premium Cigars. It’s even better for the industry when the cigar performs well – and this one certainly does. It is a cigar I would recommend to a novice or experienced cigar enthusiast. As for myself, this is a cigar that I would smoke again – and its certainly worthy of a fiver in my humidor.

* Rocky Patel Premium Cigars is a sponsor of Cigar Coop and Stogie Geeks.