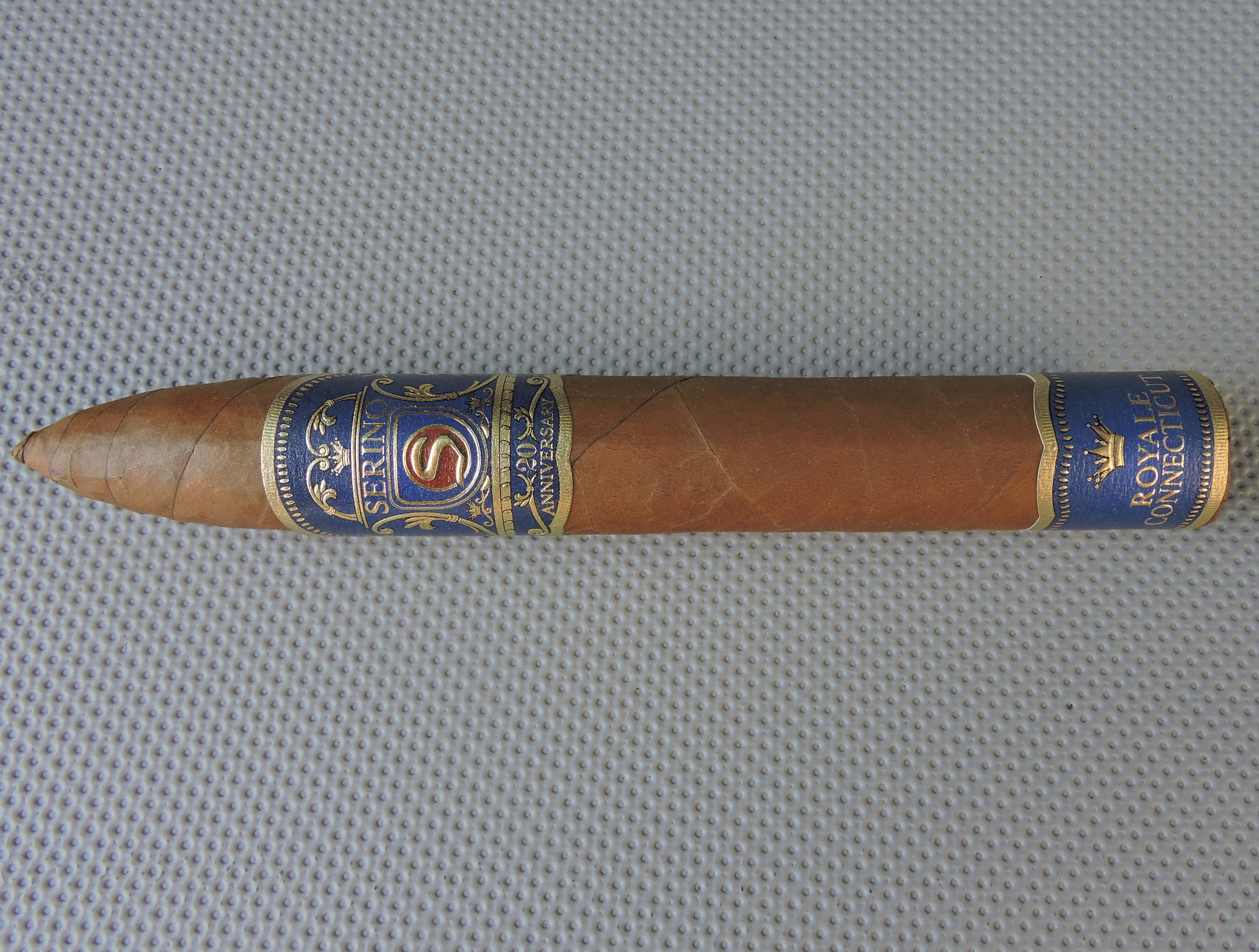 The Serino Royale Connecticut is one of four blends launched by Serino Cigar Company. The company is run by Tony Serino who has 20 years experience in the cigar industry where he was involved in importing and selling bundle cigars. With the Serino Royale line, Serino and his company make the transition into super premium cigars. To produce his cigars, Serino has teamed up with Omar Gonzalez Aleman of La Corona Cigars S.A.. Gonzalez is the former head director of the La Corona Factory in Havana, maker of many well known Cuban brands such as Romeo y Julieta, Hoyo de Monterrey, Cuaba, Por Larranaga, Saint Luis Rey, San Cristobal de Habana and some Montecristos. To U.S. cigar enthusiasts, Gonzalez is best known for his involvement of brands HR, Soneros, and Cubanacan. Today we take another of the four blends Serino Royale line with the Serino Royale Connecticut Royale in the Torpedo format. In a year which promises to be a highly competitive year for Connecticut Shade wrapped cigars, the Serino Connecticut Royale is one that compete with some of the best of them. 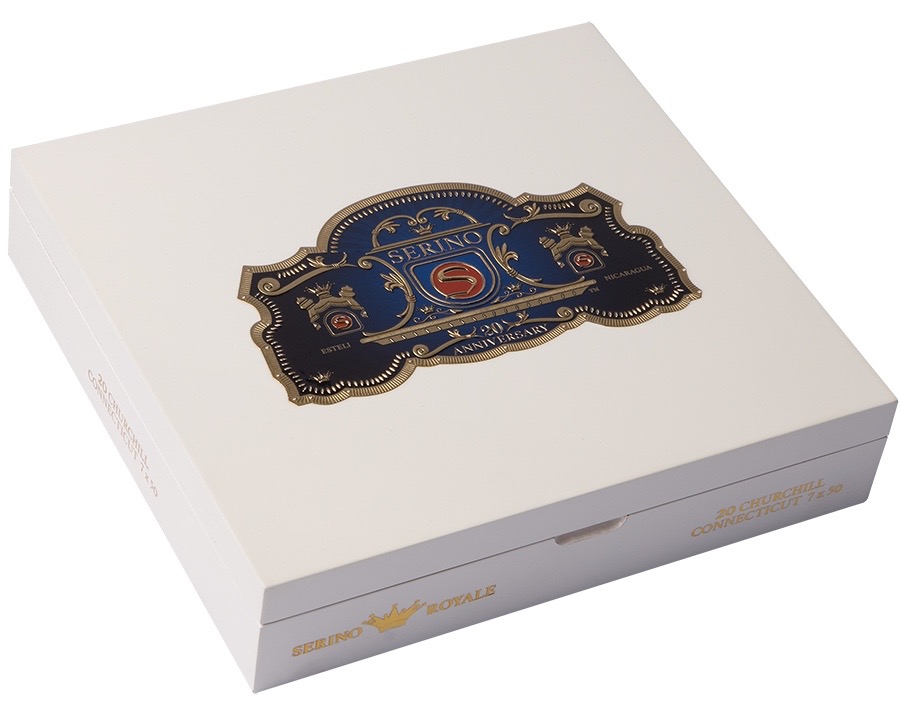 The Serino Royale Connecticut uses an Connecticut seed wrapper grown in Ecuador. It also incorporates tobaccos from the Jalapa and Esteli regions of Nicaragua.

There are four sizes in the Serino Royale Connecticut. Each are packaged in 20 count boxes. 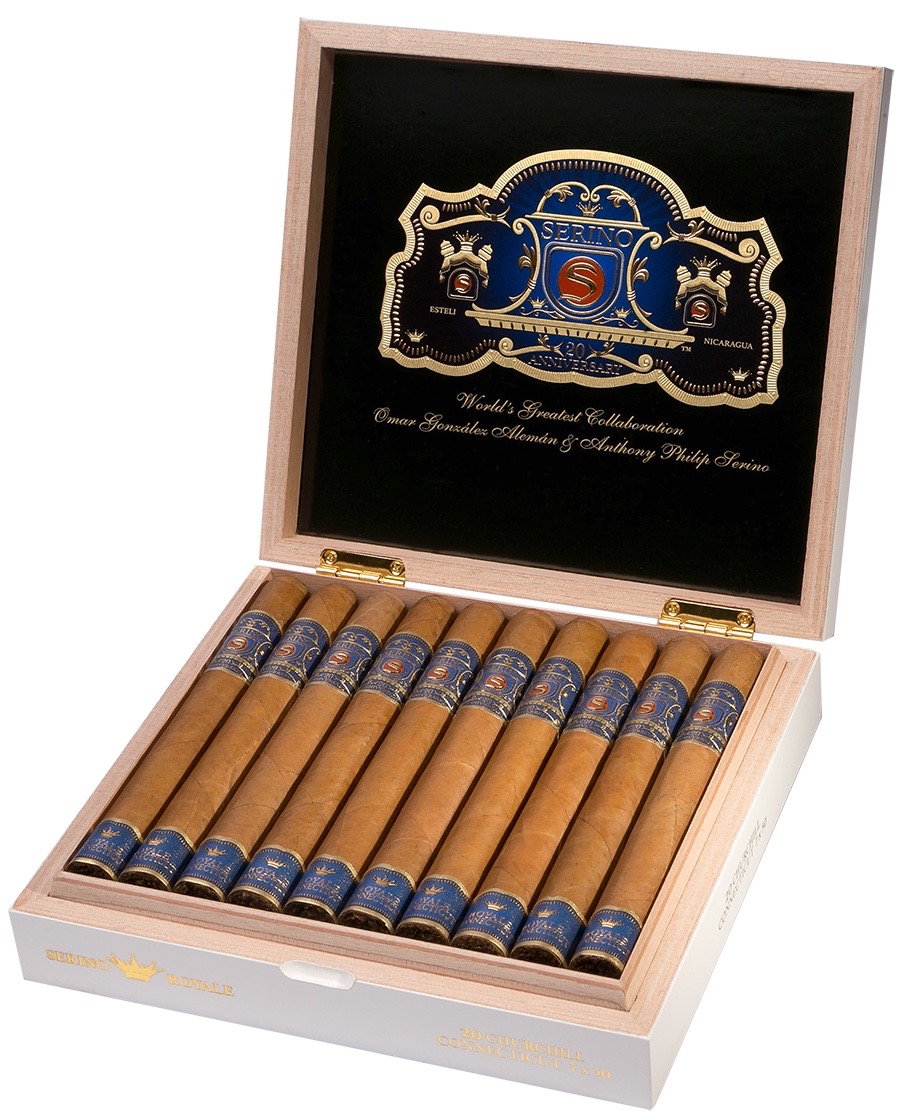 With the Serino Royale Connecticut Torpedo, I found this to be a wrapper that while still had a light brown color, was actually a shade or two darker than most Connecticut Shade wrappers. The wrapper’s surface has a coating of oil on it. There are some visible veins and any visible wrapper seams are on the thin side. The torpedo tip has a moderate, but not overly sharp taper.

There are two bands on the Serino Royale Connecticut. The primary band is mostly blue with gold font. At the center of the band is a “S” on a red circle sitting on a blue shield. Above the shield is the text “SERINO”. To the left and right is a small version of the “S” logo on a red circle sitting on an inverted blue shield. The lower part of the band has the text “20th Anniversary” in gold font. The remainder of the band has several gold adornments. The band itself is finished in gold trim.

The secondary band is also blue in color with gold trim. The text “ROYALE CONNECTICUT” is at the center of the band in gold font. A gold crown sits above that text. To the left and right is a small version of the “S” logo on a red circle sitting on an inverted blue shield.

As I do for most torpedo and belicoso vitolas, I used my Credo Special T cutter with the 36 ring gauge hole to get an ideal cut for the Serino Connecticut Royale Torpedo. Once the tip was successful removed, I moved on to the pre-light draw. The cold draw delivered a mix of  wood, cream, and a slight sour note. Overall I considered this to be a satisfactory pre-light draw. At this point I removed the footer band of my Serino Connecticut Royale Torpedo, lit up the cigar and moved on to the smoking phase.

The Serino Connecticut Royale Torpedo started out with a combination of wood, cream, and a unique combination of floral and citrus notes. There was a fusion between the floral and citrus notes resulting in a unique sweetness. At the same time, there was a “tobacco” undertone to this flavor profile. The wood and cream notes receded into the background. Meanwhile on the retro-hale, I detected notes of cedar with some citrus mixed in.

The last third saw the cream and cedar notes continue to be primary. During this stage, the floral and citrus notes were now more separate and distinct. At times both the floral and citrus notes individually popped into the forefront. This is the way the flavor profile came to a close. The resulting nub was firm to the touch and cool in temperature.

The burn to the Serino Royal Connecticut Torpedo scored very nicely. Overall the burn path remained straight from start to finish. There was a slight amount of jagged-ness on the actual burn line itself, but this didn’t warrant any additional touch-ups. Meanwhile the resulting ash was tight and firm. The ash itself had a near white color to it. As for the burn rate and burn temperature, both were ideal. 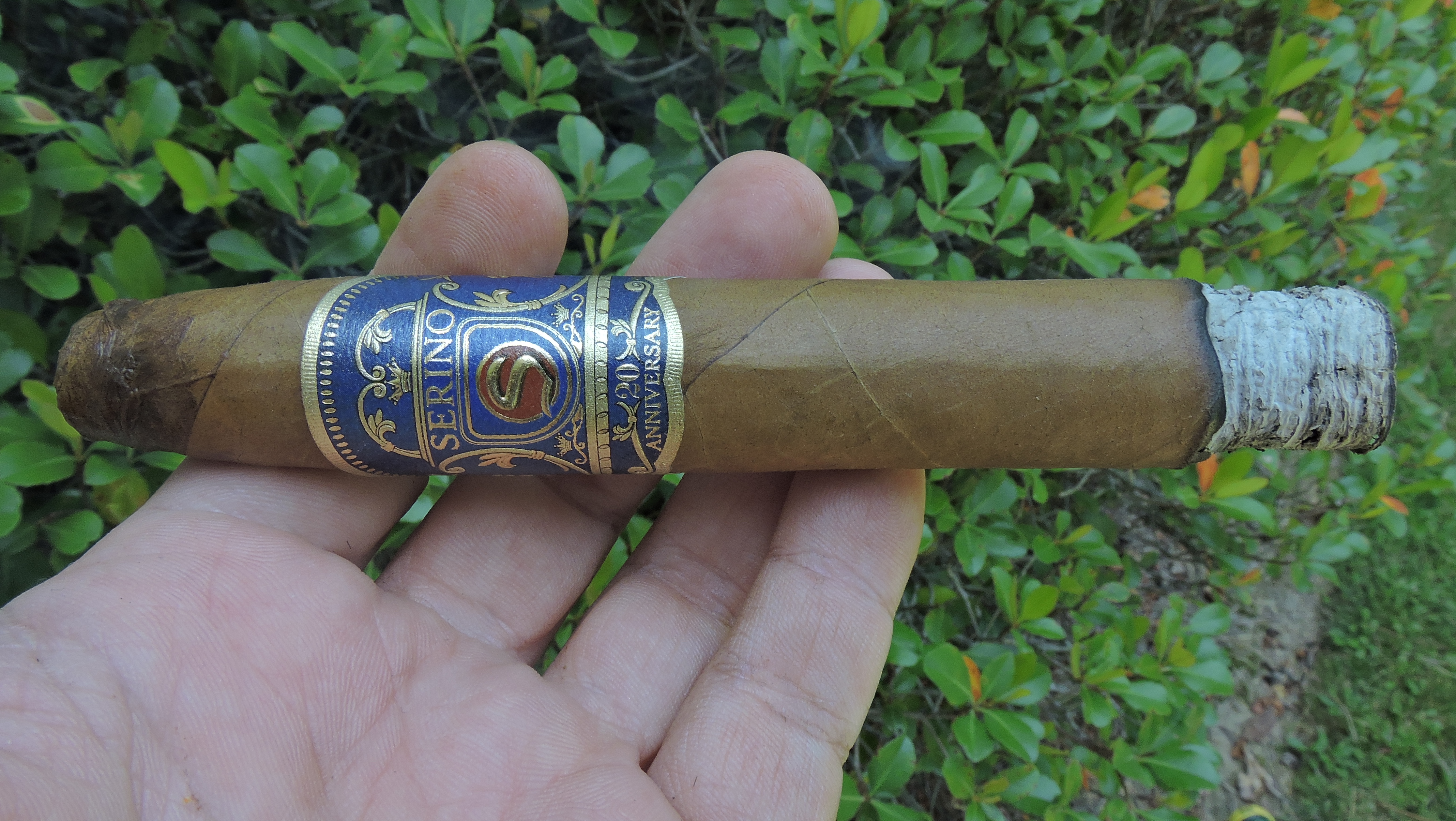 The draw also scored nicely. There was just a touch of resistance on the draw – which is something I like. I also found the torpedo tip held up nice and did not get overly soft.

Many times a Connecticut Shade cigar will try to refine itself by pushing the boundaries of strength or body. With the Serino Royale Connecticut Torpedo, this is a cigar that changes this up on the floor profile. I found the combination of the cedar and citrus notes to be the “X” factor with this cigar. It was just enough to make the Serino Royal Connecticut Torpedo a different type of Connecticut Shade cigar. Finally, I also found the torpedo format worked very nicely for this particular blend. This is a cigar I could recommend to a novice or experienced cigar enthusiast. As for myself, this is a cigar that I would smoke again – and it’s worthy of a box split.