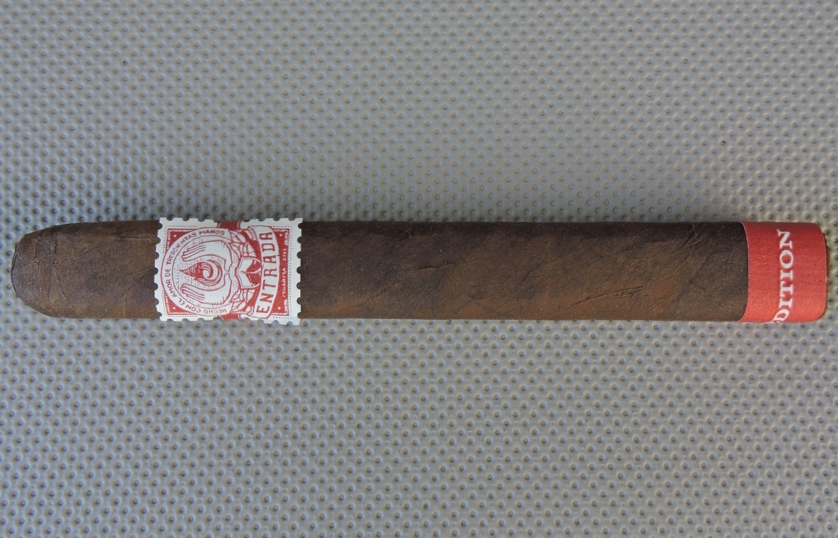 As the name indicates, the Estrada 1st Edition is the first cigar from Casa de Estrada Cigar Company. Casa de Estrada was founded by Chaz Kline. Kline operated a tobacco store in Omaha, Nebraska, but in 2013 Kline took the jump that many of the retail side have done – moving over to brand owner. In order to produce his cigar, Kline partnered with the Casa Fernandez (TABSA) factory in Nicaragua. Over the years, Casa Fernandez has had an excellent reputation for helping new cigar brands get off the ground by handling production and giving them access to many of its tobaccos. Today we take a closer look at the Estrada 1st Edition in the Corona size. Overall I found this to be an excellent product and definitely one of those “under the radar” cigars.

The Estrada 1st Edition project traces back to 2013 when the blend was finalized with Kline and the members of Casa Fernandez. Later that year, the cigar appeared at its first retail shop. The company has steadily grown since then. The following year, it made its first IPCPR Trade Show appearance, and later in 2015 the company began to expand its distribution This year, a second blend – Entrada Libertas is being launched.

As for the Estrada 1st Edition, the line is a San Andres wrapped Maduro box-pressed offering. The use of San Andres Maduro is a staple of Casa Fernandez made cigars. As for the name of the cigar and the brand, Entrada translates to “entry” – appropriate for this being a new cigar company’s first cigar.

Without further ado, let’s break down the Estrada 1st Edition Corona and see what this cigar brings to the table.

In addition to the San Andres wrapper, the rest of the blend is all Nicaraguan.

The San Andres Maduro of the Entrada 1st Edition Corona had a chocolate brown color. Upon closer examination, there is some darker marbling that can be seen on the surface on the wrapper. I found wrapper itself had a light coating of oil.  The wrapper had some thin visible veins and thin visible wrapper seams making for a smooth surface. The box-press of the cigar was firm with no soft spots. 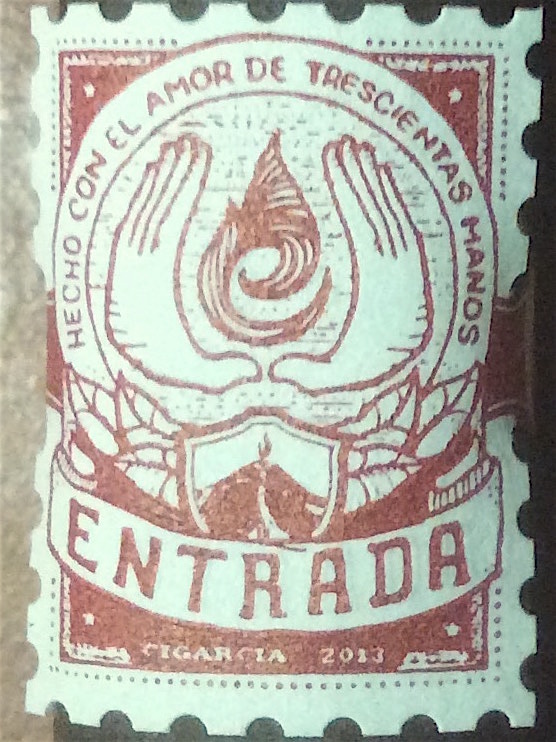 Front of the band of the Entrada 1st Edition Corona

There is a red colored secondary band on the footer with the text “1ST EDITION” in white font.

As I typically do, I commenced my cigar experience of the Entrada 1st Edition Corona with a straight cut. Once the cap was removed, I moved on to the pre-light draw stage. The dry draw produced notes of coffee. At times the coffee had a mocha (i.e. some additional chocolate notes) taste to it. I also picked up a slight cedar note. Overall I considered the pre-light draw of this cigar to be excellent. At this time I was ready to light top my Entrada 1st Edition Corona and awaited what the smoking phase would have in store.

The Entrada 1st Edition Corona started with a mix of coffee, earth, and white pepper. The coffee notes became primary early on with the earth and pepper notes moving into the background. As the 1st Edition Corona moved through he first third, I picked up some dark chocolate notes mixed in with the coffee notes. Meanwhile there was a combination of black and white pepper on the retro-hale. The smoke produced on the retro-hale had a nice lingering effect.

By the last third, the coffee notes were still grounded in the forefront, but were now joined by the pepper notes. The chocolate and earth notes were more distant. While there was some spice as a primary note, it never got overpowering. This is the way the cigar experience of the Entrada 1st Edition Corona came to a close. The resulting nub was cool and in temperature and firm to the touch.

In terms of its burn, the Entrada 1st Edition Corona maintained a straight burn path and pretty much had a straight burn line. This was not a cigar that required frequent touch-ups. The resulting ash was gray in color. While there was some minor flaking, I found the ash of the 1st Edition Corona to be on the firm side. As for the burn rate and burn temperature, both were ideal. 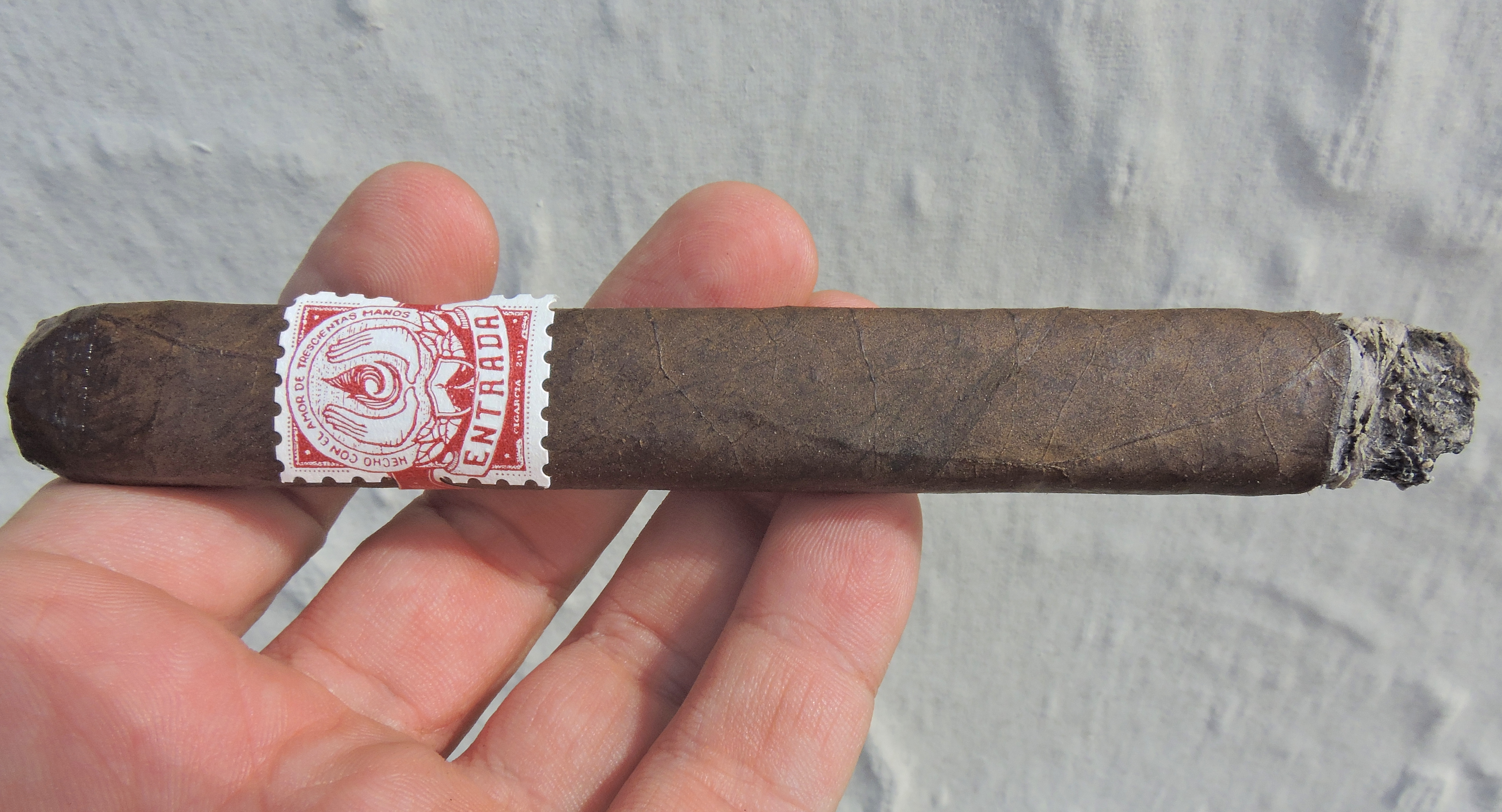 The draw to the Entrada 1st Edition Corona performed quite well. I found the draw not to be too loose, nor too tight – and it seemed tailor-fit for a box-press. At the same time, while this wasn’t a loose draw, this was a cigar that produced an ample amount of smoke along the way.

Over the years, I have said that when it comes to working with San Andres maduro wrappers, the Casa Fernandez family has done some of the best. They seem to develop blends where the wrapper doesn’t overpower the blend. While the Entrada 1st Edition Corona isn’t the most complex of cigars, this wrapper did not smother the overall flavor profile. One final note about the 1st Edition Corona. This is going to be a cigar that is best enjoyed with a retro-hale. The lingering effect of the spices of the retro-hale will definitely enhance this smoking experience. The 1st Edition Corona is a cigar that I would recommend toward an experienced cigar enthusiast. As for myself, it’s one I can easily see myself smoking again on a rotation basis. It’s certainly worthy of a box split in my book.