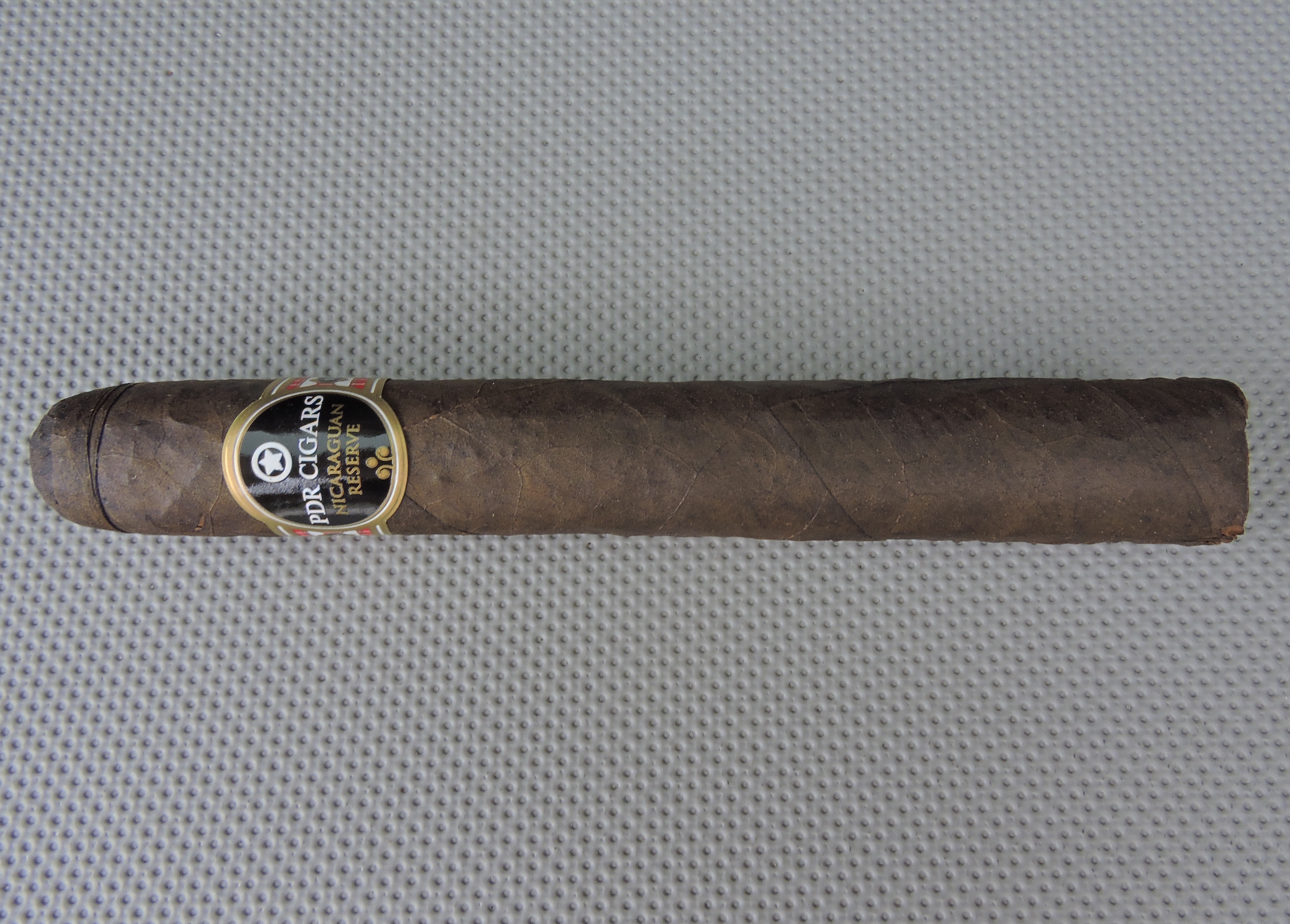 According to Best Cigar Prices, the PDR Nicaraguan Reserve is scheduled to be an on-going release. The retailer has received an allocation of 200 ten count boxes (for a total of 2,000 cigars). Depending on the impacts of the new regulations implemented by the U.S. Food and Drug Administration (FDA), it will determine what the future allocation numbers will look like.

Best Cigar Prices is not new to shop exclusive cigars. Earlier this year, the retailer launched a shop exclusive cigas called the 601 Pennsylvania Edition. This was a cigar produced by Espinosa Cigars at the company’s La Zona factory in Nicaragua.

Without further ado, let’s break down the PDR Nicaraguan Reserve and see what this cigar brings to the table:

As mentioned the PDR Nicaraguan Reserve is a Nicaraguan puro – consisting of 100% Nicaraguan tobacco. The binder and filler utilize tobaccos from the Jalapa, Esteli, and Condega growing regions of Nicaragua

The PDR Nicaraguan Reserve is available in one size -a 6 x 52 Toro. As mentioned above, the cigars are packaged in ten count boxes.

The band of the PDR Nicaraguan Reserve features a black circular field with white and gold trim around the circumference. On the top of the field is a white PDR star logo. Just below it is the text “PDR CIGARS” in white font. Just below that text is the text “NICARAGUAN RESERVE” in gold colored font. Toward the lower portion of the field are three gold adornments. The left and right side of the band features a combination of gold, white, red, and black coloring. Each side of the band has a black nameplate design. On the left nameplate is the text “HANDMADE” and the right nameplate has the text “LONGFILLER” – both in white font.

Prior to lighting up the PDR Nicaraguan Reserve, I went with my usual choice of a straight cut. Once the cap was removed I moved on to the pre-light draw. The cold draw delivered a mix of mocha and natural maduro sweetness (a cross between cherry and natural tobacco). While this was a simple flavor profile, I still found it to be quite enjoyable. At this point I was ready to light up the PDR Nicaraguan Reserve and see what the smoking phase would have in store.

The PDR Nicaraguan Reserve started out with notes of mocha, earth, and red pepper. The mocha notes had an inherent sweetness component to it. Very quickly the mocha and moved into the forefront while the red pepper moved into the background. Meanwhile the retro-hale produced an additional layer of red pepper with some cedar mixed in.

During the first third, the mocha notes moved into the forefront. The earth notes were a close secondary note. Meanwhile the red pepper remained in the background and was joined some cedar notes. The cedar was also on the after-draw where it was more prominent.

By the final third of the PDR Nicaraguan Reserve, the cedar and earth notes were now grounded in the forefront. The red pepper notes now also closed in on he forefront. At the same time, the mocha notes were now in the background and still provided some nice sweetness – balancing out the spice. This is the way the cigar experience if the PDR Nicaraguan Reserve came to a close. The resulting nub was cool in temperature, but soft to the touch.

From a burn perspective, I did find a little more unevenness than I prefer. While the touch-ups did fix the unevenness, I found the amount of touch-ups to be more frequent than I prefer. The resulting ash was nearly white in color. Overall the ash wasn’t overly firm, but it was firm enough for the ash to come off the cigar in clean chunks. Meanwhile the burn rate and burn temperature were both ideal. 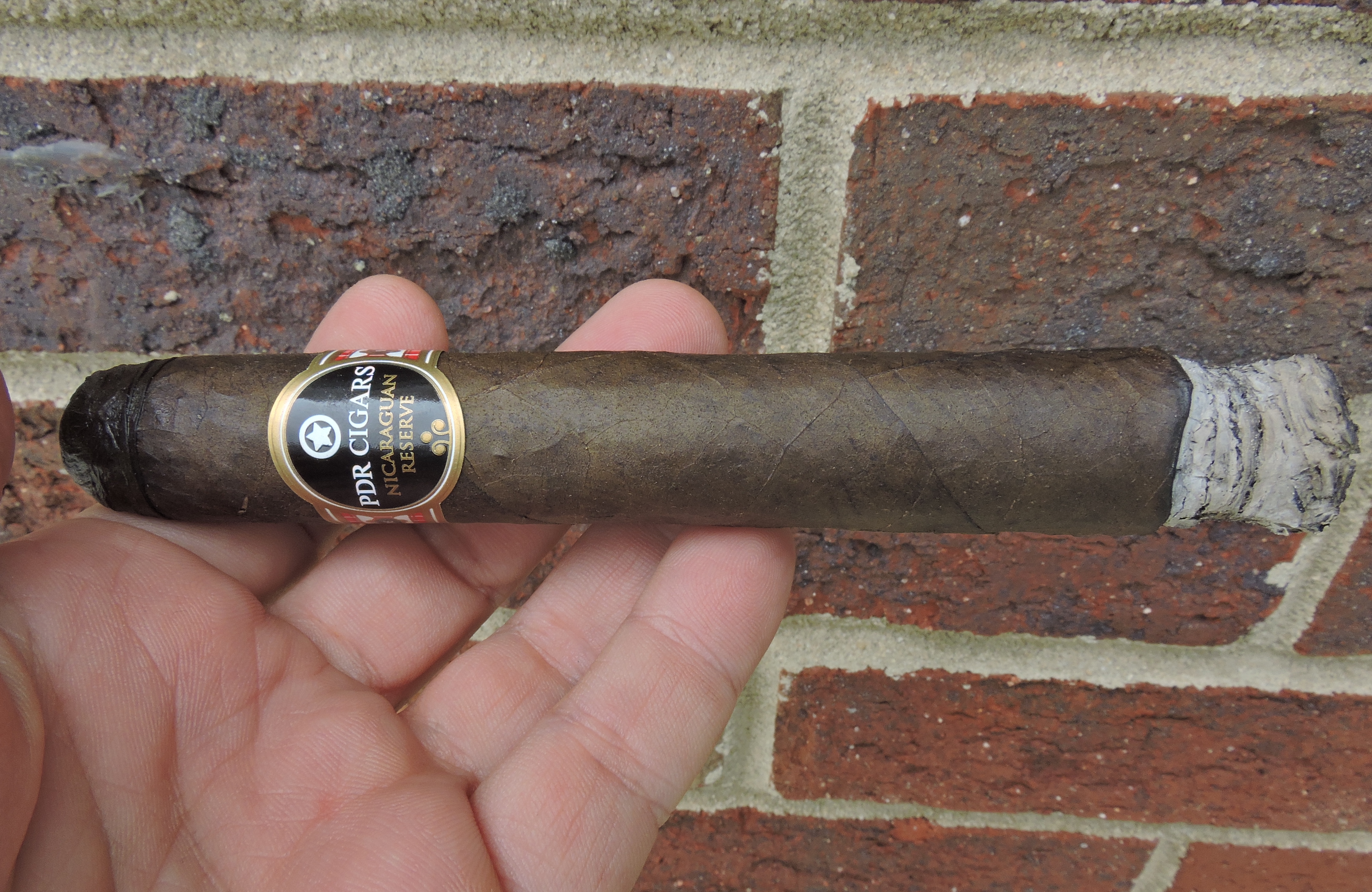 Burn of the PDR Nicaraguan Reserve

The draw of the PDR Nicaraguan Reserve was open. It was not too loose, nor was it too tight. I did find the openness of the draw produced quite a large amount of smoke.

The PDR Nicaraguan Reserve is one of the bolder cigars I’ve had out of PDR and the PDR Cigars factory. From a strength perspective, this cigar started out medium to full. By the midway point of the cigar, the strength was at the full level. I still found the strength to continue to build up in the second half. As for the body, I found the flavors produced to be full-bodied right from the start. Like the strength, the body also continued to build up in the second half.

In terms of strength versus body, the body had an edge in the first half.  By the second half, I found the strength closed in and the body and both were on an even playing field during the second half.

The PDR Nicaraguan Reserve fits the mold of a “bold Nicaraguan smoke”. It delivers a nice amount of strength. In addition, the second half of the cigar produced some classic bold Nicaraguan spiciness. Flavor-wise, while I didn’t find this to be a particular revolutionary flavor profile, but the flavors delivered were still quite enjoyable. As for the burn, I did find the frequent touch-ups to be a nuisance. Finally the price is worth mentioning here. This is a cigar that sells for $6.00 – making it an excellent value point.

Overall this is a cigar I would only steer toward a more seasoned cigar enthusiast. As for myself, it’s definitely a cigar I would reach for again. It’s one that certainly is worthy of a box split.