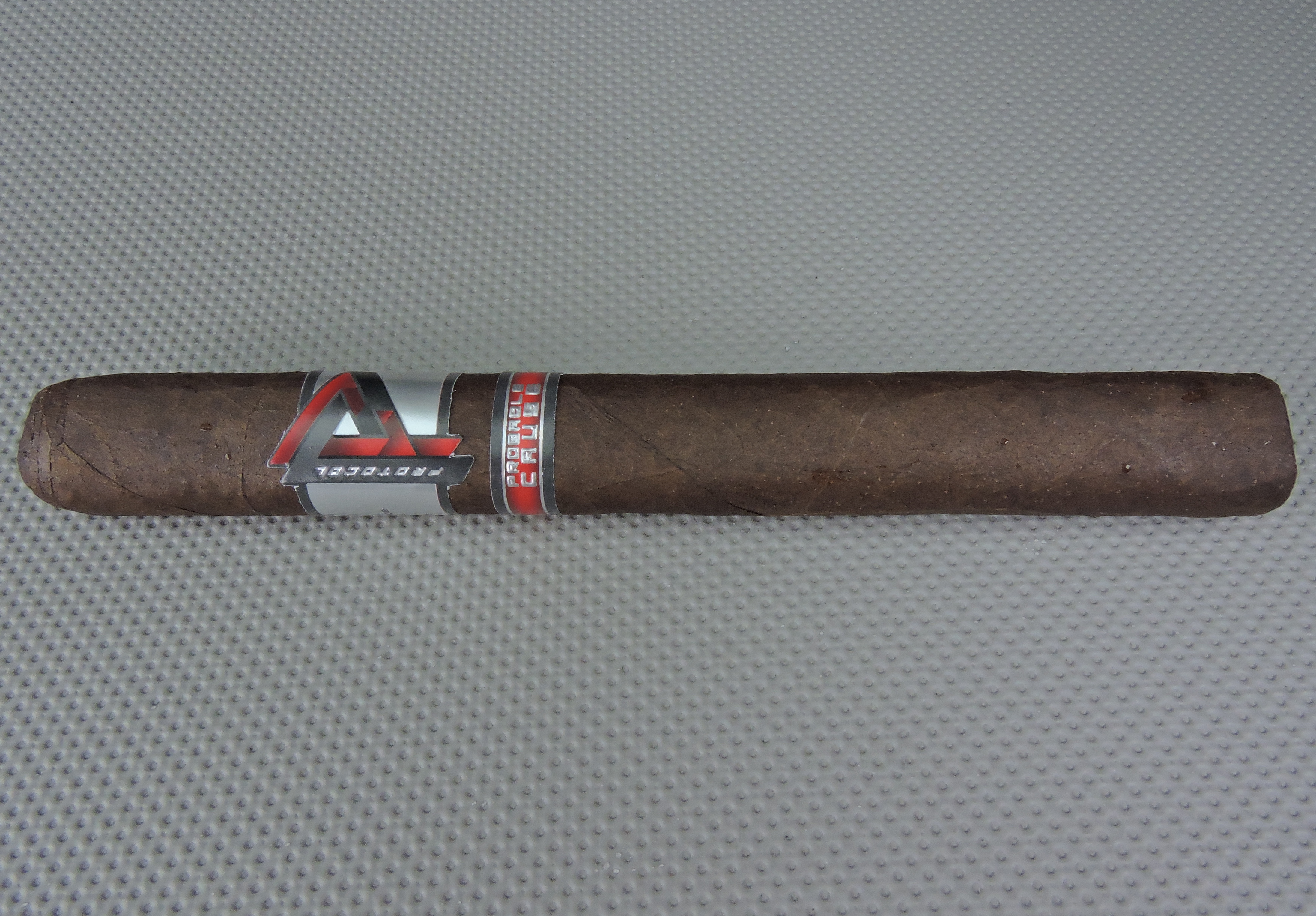 Without further ado, let’s break down the Protocol Probable Cause Churchill and see what this cigar brings to the table.

The Protocol Probable Cause features a San Andres Mexican maduro wrapper over Nicaraguan tobaccos. As with the original Protocol release, the Probable Cause is made at Erik Espinosa’s La Zona factory in Esteli, Nicaragua.

The Probable Cause is available in two sizes. The Robusto offering is a rounded cigar while the Churchill is a box-pressed offering. The cigars are packaged in ten count boxes. 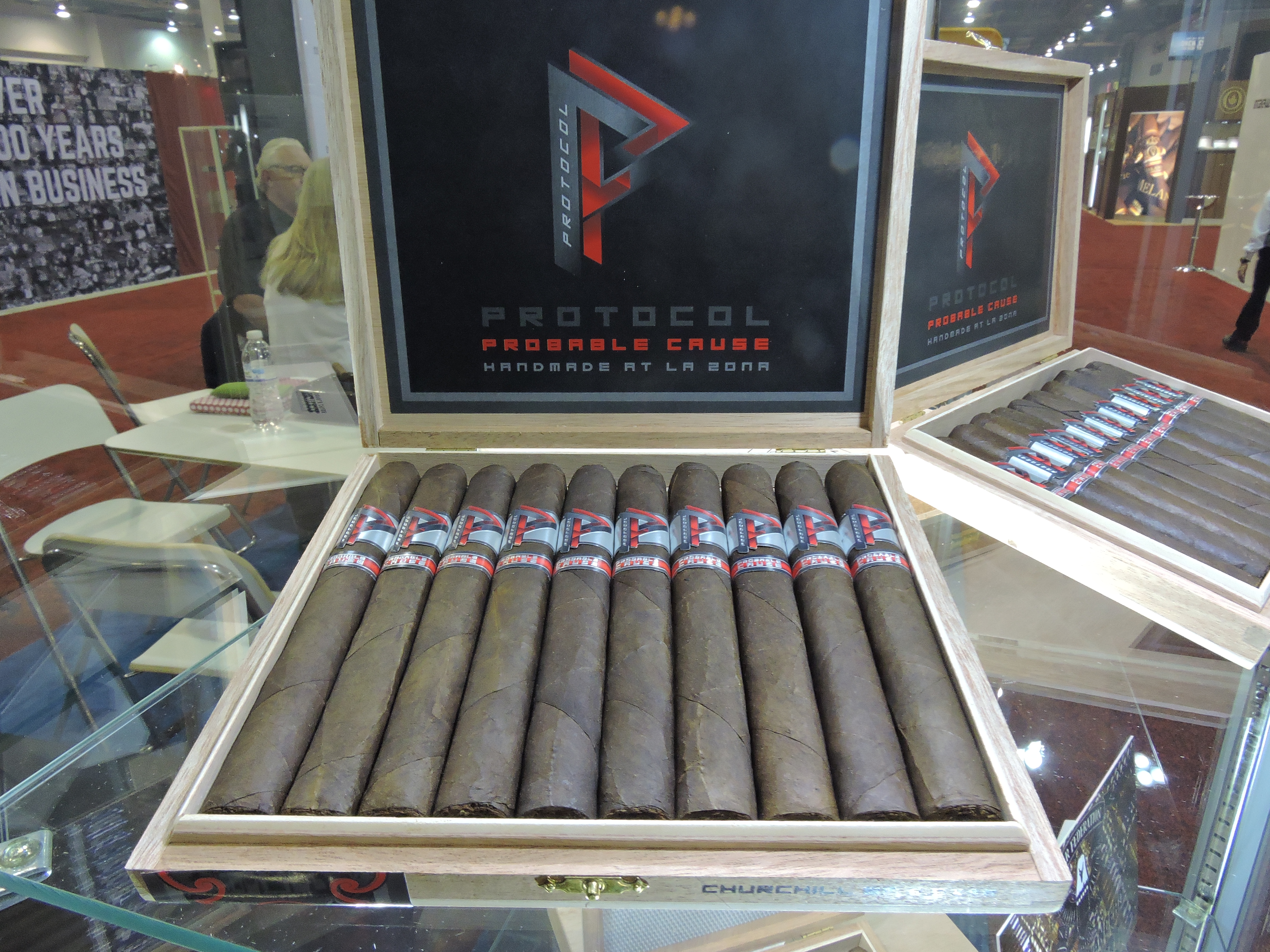 Box of the Protocol Probable Cause Churchill

The San Andres wrapper of the Protocol Probable Cause Churchill had a dark roasted coffee bean color. Upon closer examination, there was some darker marbling that can be seen on the surface. There wasn’t much in the way of oil on this wrapper. The wrapper itself also has a slight sandy feel when touched. There are also some thin visible veins and thin visible wrapper seams. The box press to the Churchill is more of a soft Cuban-style press. I found this box-press to be firm with no soft spots.

There are two bands on the Protocol. Each have a very modern-styled look to it. The primary band has a silver-colored designed background with dark gray trim. Prominently on the band are two interlocking modern-looking “P” (one is dark gray, one is red – both have a “shadowing effect”). The text “PROTOCOL” is placed on gray “P”. To the left of the “P” is the text “HANDMADE in charcoal-colored font font while to the right is the text “LA ZONA” – also in charcoal-colored font font. The remainder of the band has dark gray trim. On the far right of the band is the text “C.I.A.” in white font positioned in landscape mode.

Just below the primary band is a secondary band. This is a thin band that is also silver in color with dark gray and silver trim. On that silver background is the text “PROBABLE CAUSE” is in silver font.

As I normally do, I went with a straight cut to commence the cigar experience. Once the cap was removed, I proceeded with the pre-light draw ritual. The cold draw delivered a mix of chocolate, cedar, and a slight floral note. Overall I considered this to be a very good pre-light draw. At this point, I was ready to light up the Protocol Probable Cause Churchill and see what the smoking phase would have in store.

The Protocol Probable Cause Churchill started out delivering notes of chocolate, earth, cedar, and black pepper. Early on the chocolate and earth notes became primary early on. The cedar and black pepper became secondary notes. I also picked up a layer of black pepper on the retro-hale.

The chocolate notes became richer throughout the first third. The earth notes were replaced by more of a coffee-urn note (this is a plus as it reminded of New York City’s Chock Full O’ Nuts coffee). The coffee-urn notes floated between a primary and secondary note. The chocolate and coffee notes could be picked out individually at times. The cedar and black pepper remained in the background, but gradually increased This flavor profile held for the remainder of the first half of the cigar experience.

During the start of the second half of the Probable Cause Churchill, the chocolate / coffee combination moved to moved of an coffee / earthy combination. Meanwhile the gradual increase of the cedar and pepper spice notes was still very much in play.

The last third of the Probable Cause Churchill didn’t see much of a change in the flavor profile except the gradual increase in the spices ended. The spices didn’t quite make it to the forefront as the coffee / earth profile still represented the primary notes. This is the way the Probable Cause Churchill came to a close. The resulting nub was firm to the touch and cool in temperature.

No surprises when it comes to burn and draw. This cigar lives up to the high standards we have seen come out of La Zona. The burn path remained straight from start to finish. I did find the actual burn line itself had a slight jaggedness from time to time, but this didn’t warrant any additional touch-ups. The resulting ash was on the firm side and with a nice salt and pepper color scheme. Meanwhile the burn rate and burn temperature were both ideal. 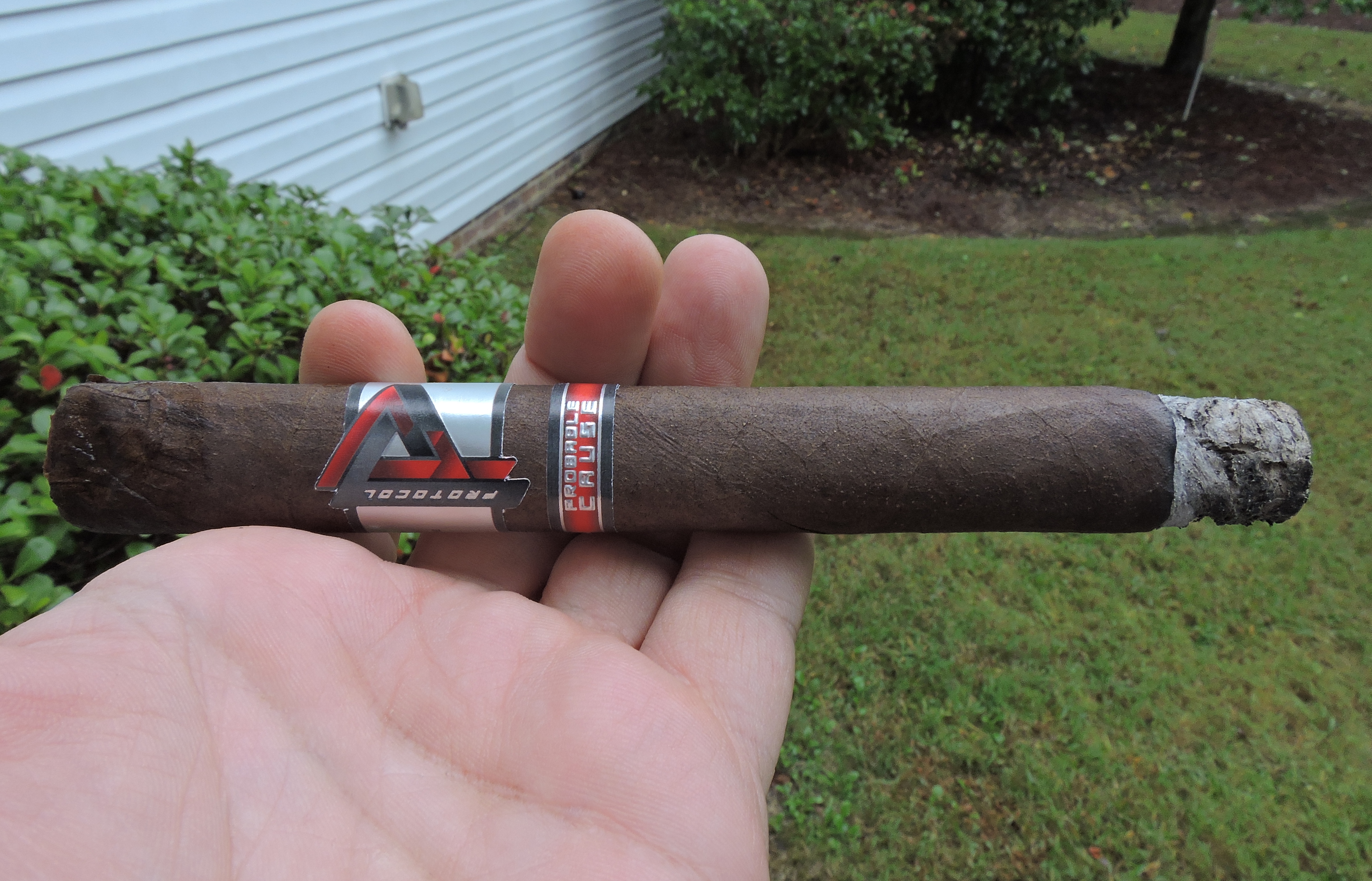 Burn of the Protocol Probable Cause Churchill

From a strength perspective, the Protocol Probable Cause is not going to overpower you with nicotine. I found this cigar to be squarely in the medium strength range. As for the flavors, they had some nice depth and I assessed them as being medium to full-bodied. Both the strength and the body remained relatively constant throughout the smoking experience. In terms of strength versus body, I gave the edge to the body.

As mentioned at the start, no sophomore jinx here. The Protocol Probable Cause Churchill is a cigar that ultimately excels in the most important category – flavor.  This isn’t a cigar that is going to throw a radically different flavor profile. The flavors produced will be very common to cigar enthusiasts who love a good maduro. The difference is that the synergy of these flavors really seemed to click. When it comes to San Andres Maduro wrapped cigars, I’ve always said a blend works best with it when the wrapper does not overpower the rest of the blend. This is exactly what you get with the Protocol Probable Cause Churchill.

Somewhat surprisingly, I found this cigar a little more dialed back than the Habano version of the Protocol. It’s a cigar I’d recommend to an experienced cigar enthusiast or a novice looking to graduate to something in the medium to medium to full range. As for myself, this is a cigar I would smoke again – and it’s one easily worthy of a box purchase.