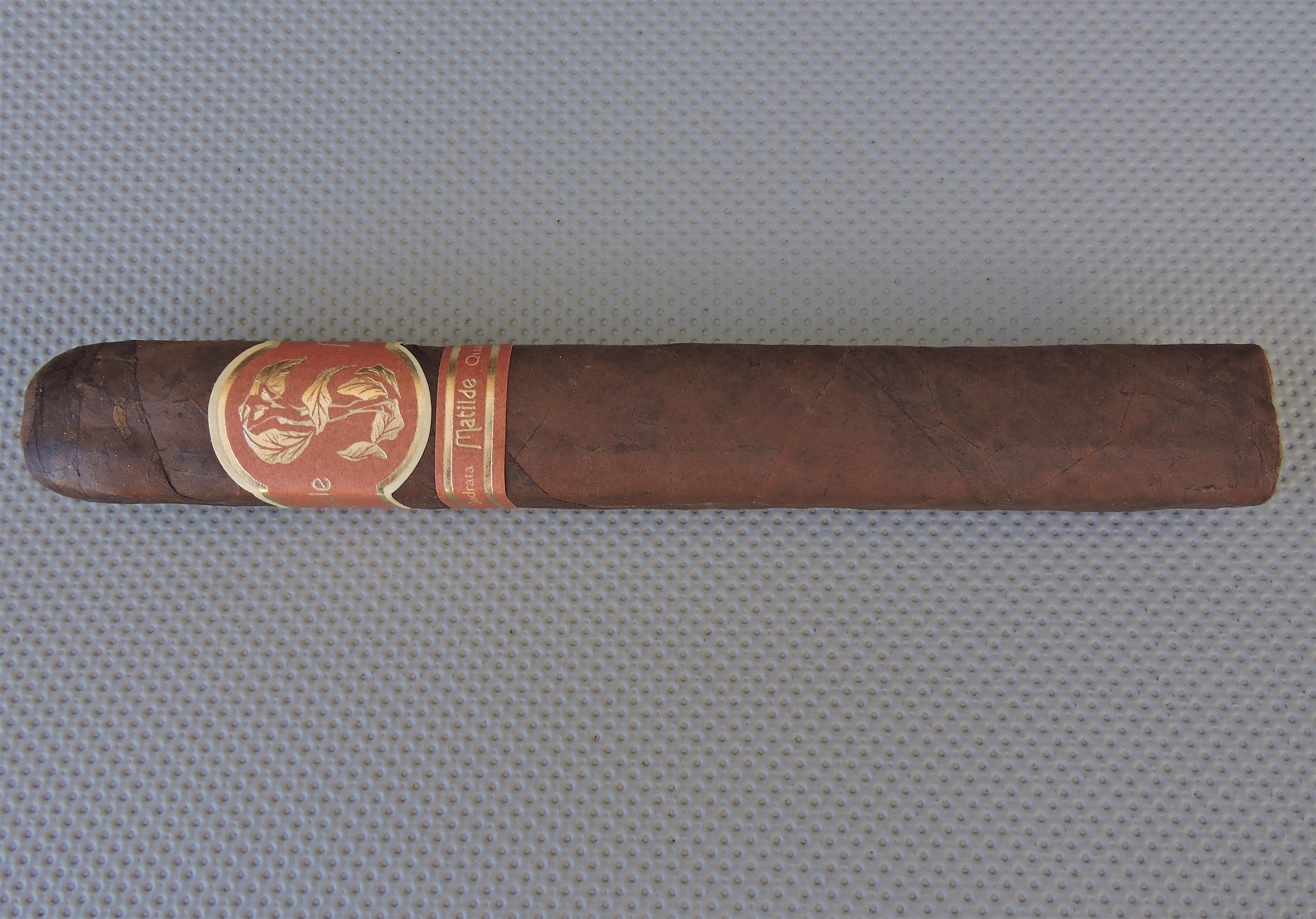 The Matilde Quadrata is the third regular production line by Matilde Cigars. Matilde Cigars was launched three years ago by the legendary Jose Seijas and his family. Seijas is best known for his tenure as Vice President and General Manager of Tabacalera de Garcia – maker of Altadis products. With the Quadrata, it introduces an all box-pressed offering into the company’s portfolio. The line was announced just prior to the 2016 IPCPR Trade Show and was the company’s featured product at the show. Recently I’ve had an opportunity to smoke the Matilde Quadrata in the Toro Bravo size. Matilde has done a great job at delivering consistent, high-quality, and enjoyable smokes. With the Quadrata, once again the Seijas family succeeds in bringing a winning formula to market.

The Matilde Quadrata is being produced at Jochy Blanco’s Tabacalera Palma factory. Late last year, the company announced it was moving production of its previous two lines, Matilde Renacer and Matilde Oscura to Tabacalera Palma from its own factory, Tabacalera Matilde. It was also last year that Matilde announced it would have Quesada Cigars handle its distribution. Both of these moves have been strategic to the growth of Matilde Cigars.

In terms of the profile of the Quadrata, Matilde says it falls in between the Renacer and Oscura. It is a cigar that is stronger than the Renacer, but dialed back from the Oscura.

Without further ado, let’s break down the Matilde Quadrata Toro Bravo and see what this cigar brings to the table.

The Matilde Quadrata consists of a blend of Dominican and Nicaraguan tobaccos wrapped with an Ecuadorian Habano leaf.

There are three box-pressed vitolas in the Matilde Quadrata line. Each of the three sizes are available in 20 count boxes. 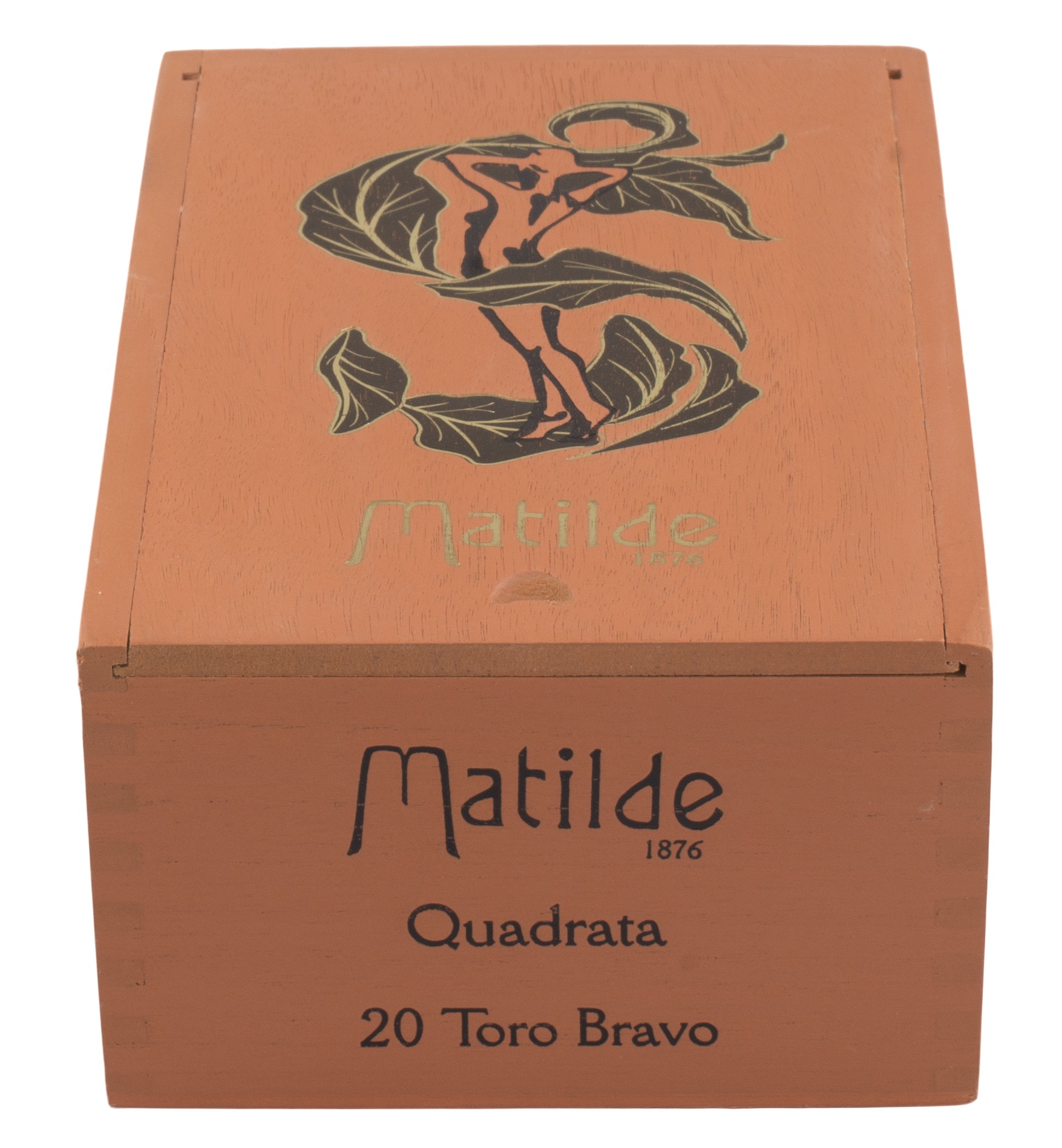 The Ecuadorian Habano wrapper of the Matilde Quadrata Toro Bravo has a medium to dark brown color to it. Depending on how the light shines on it, the wrapper may exhibit a colorado red tint of varying degrees. Upon closer examination, there was some darker marbling that can be seen on the surface of the wrapper. The wrapper itself was on the smooth side with a light coating of oil on it. There were some thin veins and thin visible seams. 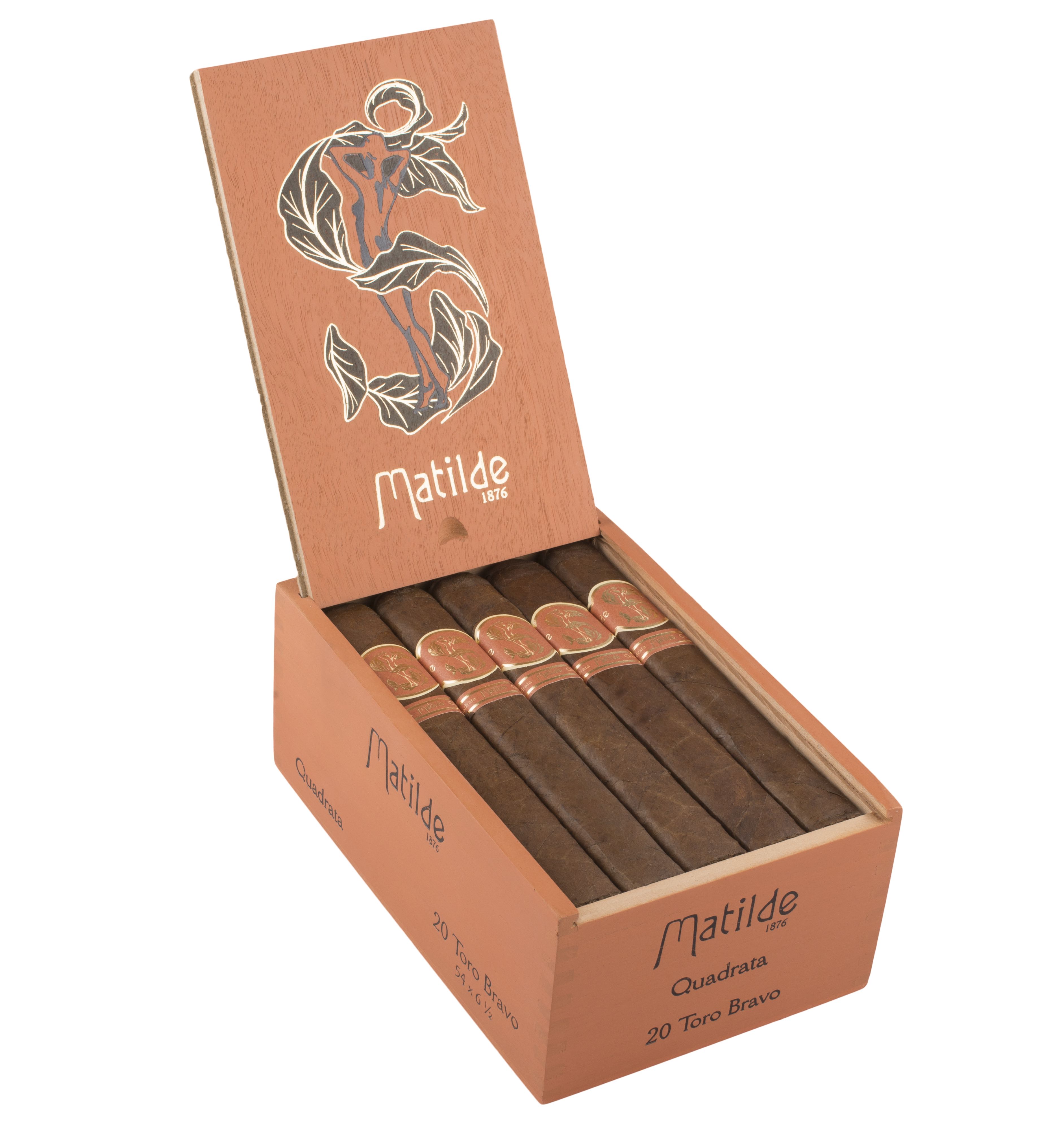 There are two bands on the Matilde Quadrata. The primary band has an orange background with off-white and gold colored trim. On the center of the band is the gold and white Matilde logo which is an image that appears to be a statue-like image with an “S” shaped leaf design draped over it. To the left and right is the text “Matilde” in gold font.

The secondary band is also orange. The text “Matilde” is in gold font on the center of the band. To the left and right is the text “Quadrata” in small white font.  There are gold pinstripes on the upper and lower portion of the band.

As I typically do, I started my experience of the Matilde Quadrata Toro Bravo with a straight cut. After removing the cap I moved on to the pre-light draw experience. The dry draw provided a mix of natural tobacco, white pepper, cedar, and wood. Overall I considered the pre-light draw of this cigar to be satisfactory. At this point, I was ready to light up the Matilde Quadrata Toro Bravo and see what the smoking phase would have in store.

The start to the Matilde Quadrata Toro Bravo delivered a mix of cinnamon, natural tobacco, white pepper, and classic wood notes. Early on, the cinnamon and cedar notes became primary and developed a nice fusion between the two. This fusion delivered a nice, but not overpowering sweetness. Meanwhile, the natural tobacco, classic wood, and pepper notes moved into the more distant background. There also was an underlying creamy texture to the flavor profile that kept the profile smooth. On the retro-hale was an additional layer of cedar.

As the Matilde Quadrata Toro Bravo, there was a decrease in the cinnamon in the forefront, which in turn led to a decrease in the sweetness. At the same time, the white pepper notes slowly started to increase. Toward the later part of the second third, the classic wood notes started to become more prominent. The creamy texture diminished slightly as well, but the Toro Bravo still was quite smooth. On the retro-hale I picked up some pepper mixed in with the cedar notes.

The last third of the Matilde Quadrata Toro Bravo saw more of a mix of classic wood and pepper in the forefront. There was still some sweetness from the cinnamon and cedar. The creamy texture also did not dissipate. This is the way the smoking experience came to a close. The resulting nub was soft to the touch, but cool in temperature.

In terms of the burn of the Matilde Quadrata Toro Bravo, there was a slight amount of meandering from time to time. This was rectified with some touch-ups, and the amount of touch-ups that were required was not excessive. The resulting ash was a silver-gray with some darker speckling in it. I found the ash to be not overly firm, but not loose or flakey either. Meanwhile the burn rate and burn temperature were both ideal.

As for the draw of the Matilde Quadrata Toro Bravo, this was open, but not loose. Overall this was a low maintenance cigar to derive flavor from.

In terms of strength versus body, I found both attributes balanced each other nicely for the first two thirds.  By the last third, I found the strength had a slight edge over the body.

Overall I enjoyed my experience of the Matilde Quadrata Toro Bravo. In terms of the Quadrata falling in between the Renacer and the Oscura in terms of strength and body, I actually found the Quadrata to be the Matilde offering that had the most strength – however that is just my personal assessment and everyone’s palate is different. Still, the Quadrata Toro Bravo delivers another fine option in the Matilde lineup. This is a cigar I would steer toward recommend to an experienced cigar enthusiast, but it’s also a nice cigar for a novice to “graduate” to the medium to full level. As for myself, this is a cigar I would smoke again – and it’s certainly worthy of a box split.