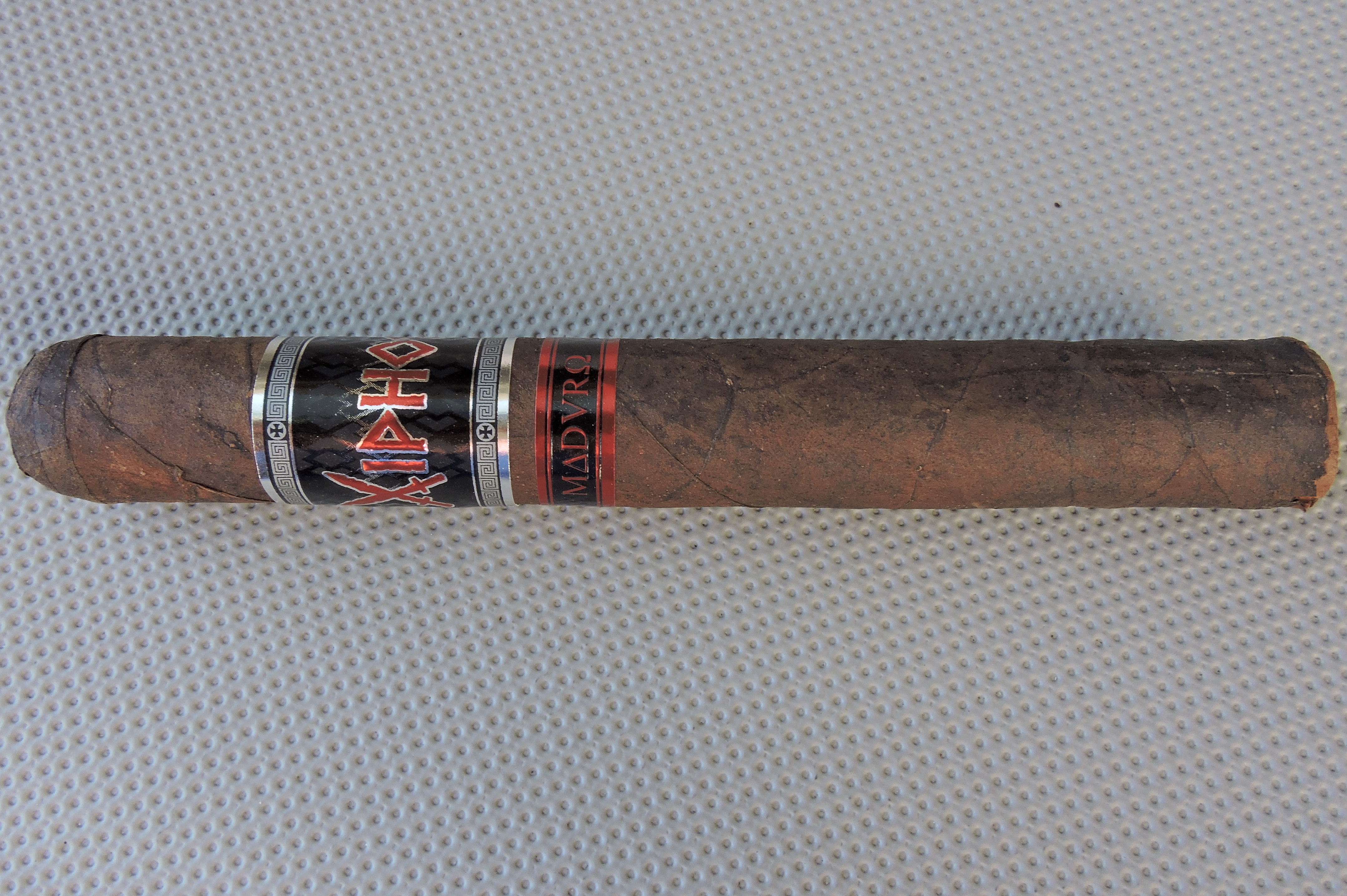 Today, we look at a cigar called the Xiphos NR Maduro. It is one of five blends offered by Xiphos Cigars. Xiphos Cigars was founded by Brad Longanecker. The company has two main brands in its portfolio: Xiphos NR and Xiphos CR. The brands are differentiated by the country where they are produced. For the Xiphos CR, the cigars are produced in Costa Rica while for the Xiphos NR, the cigars come from the New Order of the Ages (NOA) factory owned by Noel Rojas and Brandon Hayes. As for the name, a Xiphos is a short double-edged sword used by the Ancient Greeks. From the packaging and banding, the cigars definitely have a Greek culture theme to them. Recently I had my first exposure to an offering from Xiphos, the Xiphos NR Maduro in the Toro size. Overall I found this cigar to be one of the revelations of 2016 and one of the best cigars to come out of the NOA factory.

The following is a list of the five blends with the associated wrapper offering:

Without further ado, let’s take a closer look at the Xiphos NR Maduro Toro and see what this cigar brings to the table.

The Xiphos NR Maduro is a three country multi-national blend. The cigar is highlighted by a Connecticut Broadleaf wrapper. The cigars were blended by Longanecker and Roniel Aragon of the New Order of the Ages factory.

There are three sizes available for the Xiphos NR Maduro:

The Xiphos NR Maduro is packaged in cans. There are ten cigars per can.

The Connecticut Broadleaf wrapper of the Xiphos NR Maduro Toro has a rich dark roasted coffee bean color. The wrapper has some prominent darker marbling to it. This is an oily wrapper that is slightly bumpy on the surface. Three some visible wrapper seams and some thin visible veins.

There are two bands on the Xiphos NR Maduro. On the Xiphos CR series, the band has a design similar to a blue and white New York City style Greek coffee cup. With the Xiphos NR series, it is a black, red, and silver version of the Xiphos CR band. The band has a mostly black background with a subtle gray design in the background. The band’s trim is silver and includes a pattern seen on those New York City Greek coffee cups. The upper and lower portion of that trim also have three small crusade-like adornments on it. The text “XIPHOS” is prominently displayed on the front in a large metallic red font accented with some silver. The “X” in Xiphos is represented by two interlocking short swords. The upper left of the band has the Gre;text “HΔΠDMΔDΞ” (representing Handmade) and the upper right has the text “ΞΨT. 2015” (representing Est. 2015) on it. The far right has a black Xiphos design on a red metallic background surrounded by silver.

The secondary band is black with metallic red trim across the top and bottom. The text “MΔDVRΩ” is displayed in metallic red font – representing “MADURO”.

As I normally do, I started my cigar experience of the Xiphos NR Maduro Toro with a straight cut. After removing the cap, I moved on to the pre-light draw stage. The dry draw delivered a deep roasted coffee note with a touch of floral. Overall I considered this cigar to have a simple, but very good pre-light draw experience. At this point I was ready to light up the Xiphos NR Maduro Toro and see what the smoking phase would have in store.

The Xiphos NR Maduro Toro started out with more of the deep roasted coffee notes. In the background there was both a chocolate and fruit note providing a subtle amount of sweetness. I also picked up a slight amount of black pepper on the tongue, but it was more prominent on the retro-hale.

During the first half, roasted coffee notes in the forefront became richer. At times, the coffee produced an occasional bitter component, but this actually balanced against the sweet and spice notes quite nicely. Meanwhile there still was some fruit sweetness in the background and the mocha notes continued to recede further into the background. The black pepper remained in the background on the tongue, but started to slowly increase in intensity.

As the Xiphos NR Maduro Toro moved through the second half, the spices continued to increase. I still detected the black pepper, but now I also picked up a cedar component. There still was a rich coffee note in the forefront, and some chocolate and fruit in the background.

During the final third, the cedar-spice and coffee notes were the dominant ones. There still were some pepper and fruit notes in the background. While there was moderate spice component at the end of this cigar, I never found it got overpowering. This is the way the cigar experience of the Xiphos NR Maduro Toro. The resulting nub was cool in temperature and firm to the touch.

The Xiphos NR Maduro Toro was a well-constructed cigar and this reflected nicely in the scores for the attributes of burn and draw. The cigar maintained a straight burn path and a near straight burn line from start to finish. The resulting ash was nearly white in color with some darker speckling mixed in. This was a tight and firm ash that came off the cigar in clean chunks. The burn rate and burn temperature were ideal. 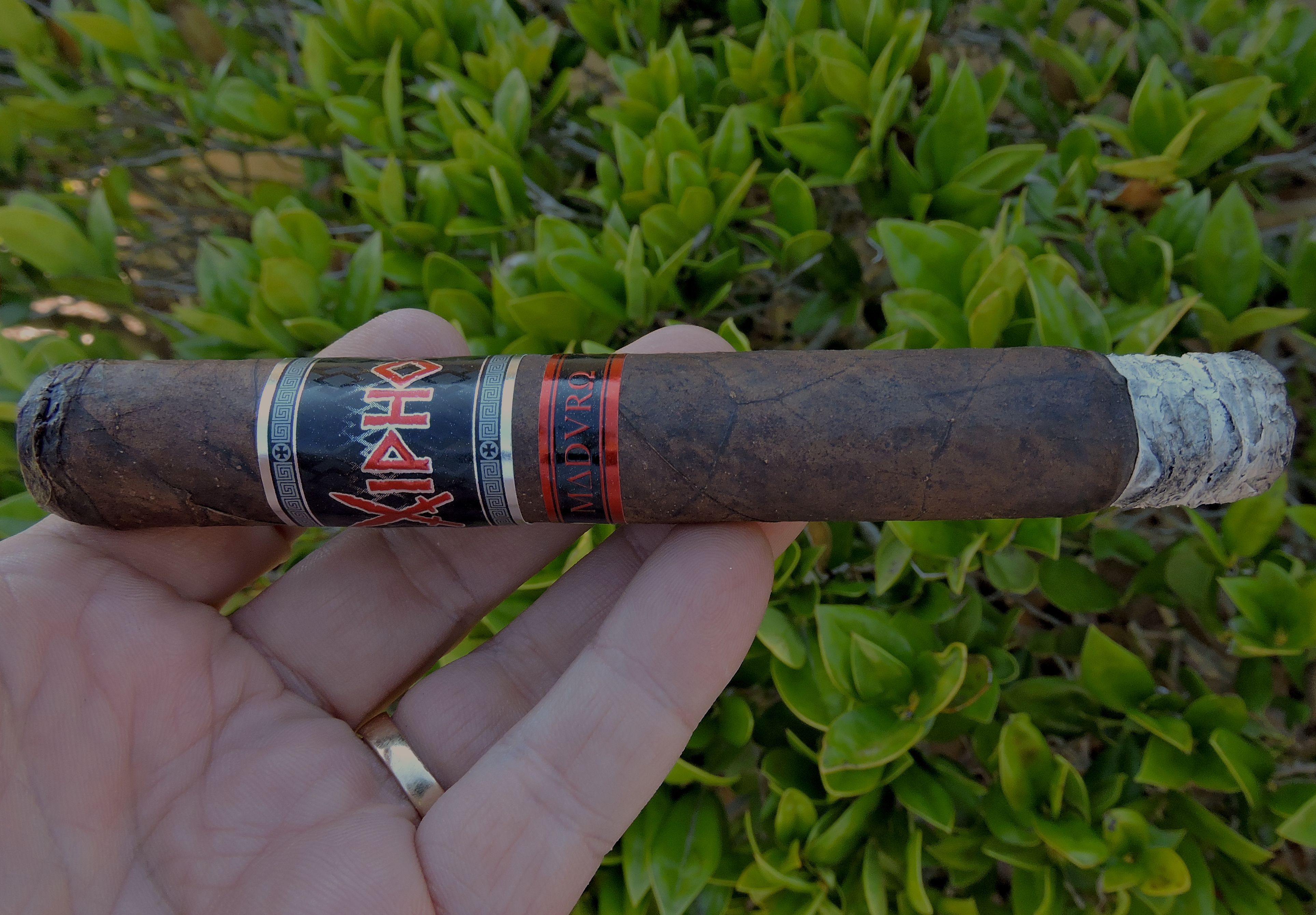 As for the draw, the Xiphos NR Maduro Toro delivered one of the better draws I have encountered in 2016. This had just a touch of resistance – which is something I like. At the same time, I found the NR Maduro Toro to produce an ample amount of smoke.  In the end, this cigar earned the highest assessment rating for a draw – namely “Exceptional”.

There was no doubt about it – the Xiphos NR Maduro Toro delivered a bold experience. This is a cigar that is medium to full in strength from start to finish. I did find the NR Maduro Toro increased in strength during the smoking experience, but in the end it didn’t quite cross into full strength territory.

As for the body, it also started out medium to full, but by the start of the second third, it didn’t move into full territory. As for strength versus body, I gave the edge to the body.

In terms of a cigar, the Xiphos NR Maduro Toro is one of the revelations of 2016. While it had excellent construction and the right amount of complexity, the NR Maduro Toro excelled in the area that was most important – flavor. This cigar is a wonderful example of an excellent Connecticut Broadleaf wrapped cigar. I believe the use of the Indonesian binder up against the bolder stronger Connecticut Broadleaf wrapper allowed the wrapper’s flavors to shine more. Finally, at $8.99, this cigar is a true value. It’s a cigar I’d recommend to an experienced cigar enthusiast looking for a bolder smoke. As for myself, it’s a cigar I’d smoke again – and one that’s worthy of picking up a box (can) of.