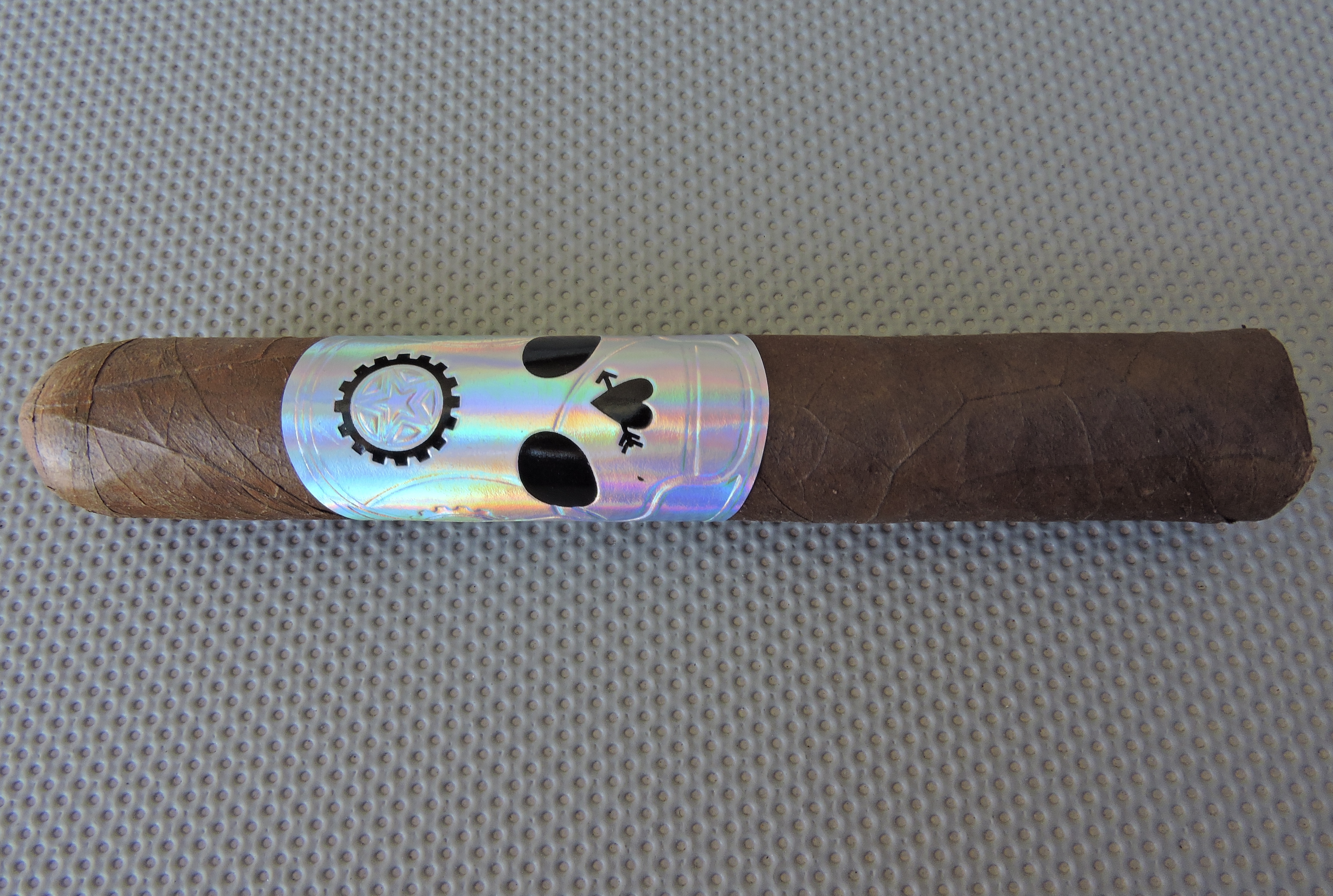 At the 2016 IPCPR Trade Show, Foundry Tobacco Company showcased a new offering called Time Flies. Foundry is a boutique-style subsidiary under General Cigar that was established in 2012. Time Flies is one of two recent projects by General Cigar that was blended by A.J. Fernandez. One of the big stories from the 2016 IPCPR Trade Show was that Fernandez was involved in blending several high profile releases for companies such as La Palina; Foundation Cigar Company, Boutique Blends, and General.  With General, Fernandez was involved with Hoyo La Amistad and now Time Flies. Recently I’ve had an opportunity to smoke the new Time Flies in the 550 (Robusto) size. Overall, I found this to be an excellent offering and one that can make a great everyday rotation smoke.

Michael Giannini was the former Creative Director at General Cigar and had spearheaded the Foundry Tobacco blend for many years. When he was showcasing Time Flies at the 2016 IPCPR Trade Show, he had told me “There are so many beats in your chest and only so many words in your head”.  Foundry is a brand at General Cigar that had served as a creative sandbox for the company.  While this year was no exception, collaborating with Fernandez provided another avenue this creativity – thus it was a way to obtain those additional “beats and words”. 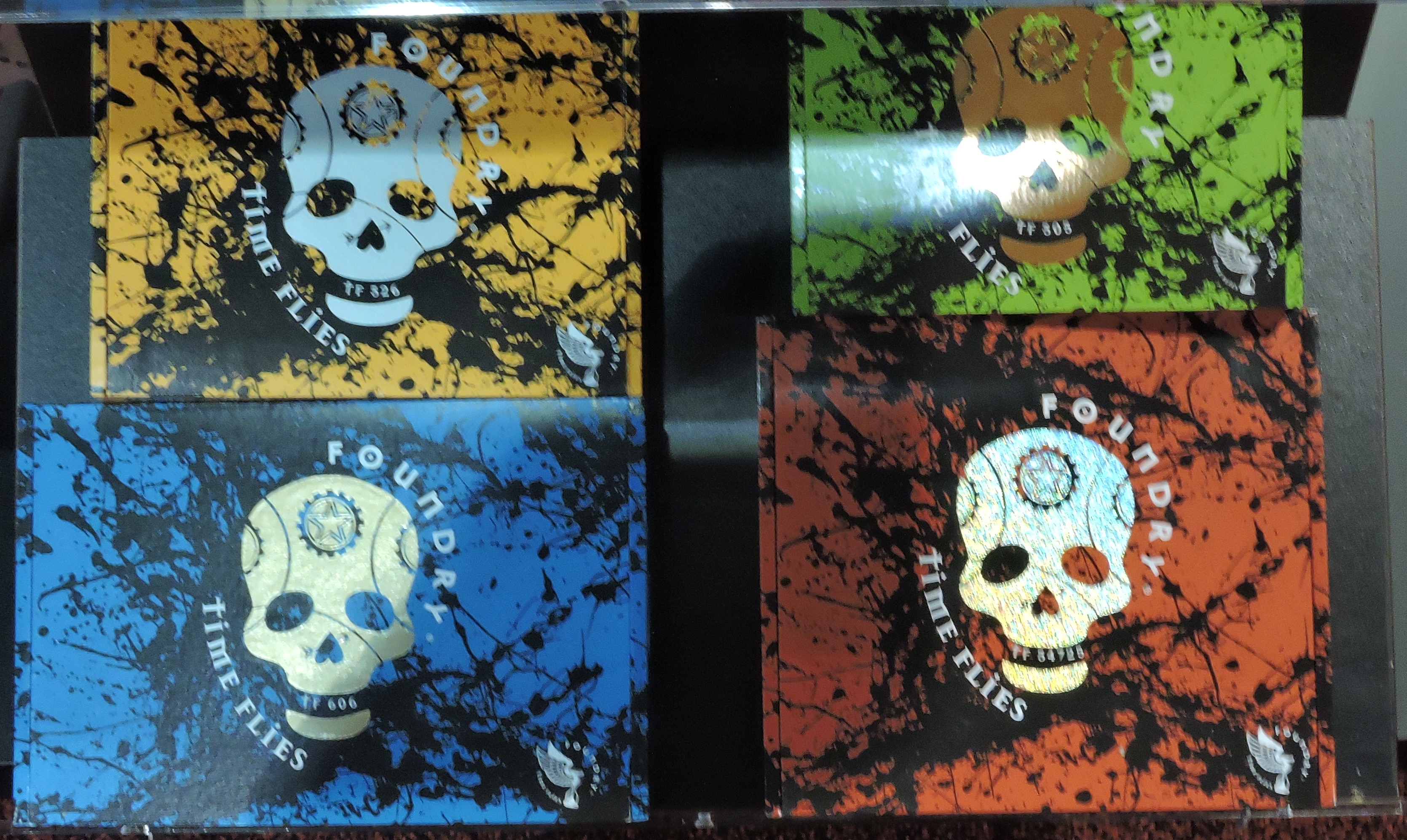 There were actually several releases that were unveiled around the Time Flies line. The Time Flies 550 is one of four vitolas that is a regular production offering under Time Flies. This cigar features a Habano 2000 wrapper. There also was a limited edition Sumatra wrapper offering that was unveiled at the 2016 IPCPR Trade Show. This limited edition Time Flies came in one size (a Robusto) and was packaged in unique-styled skull-shaped boxes. In addition, a one of a kind luxury humidor was unveiled at the trade show that contained yet another (undisclosed) Time Flies blend as a part of that package. 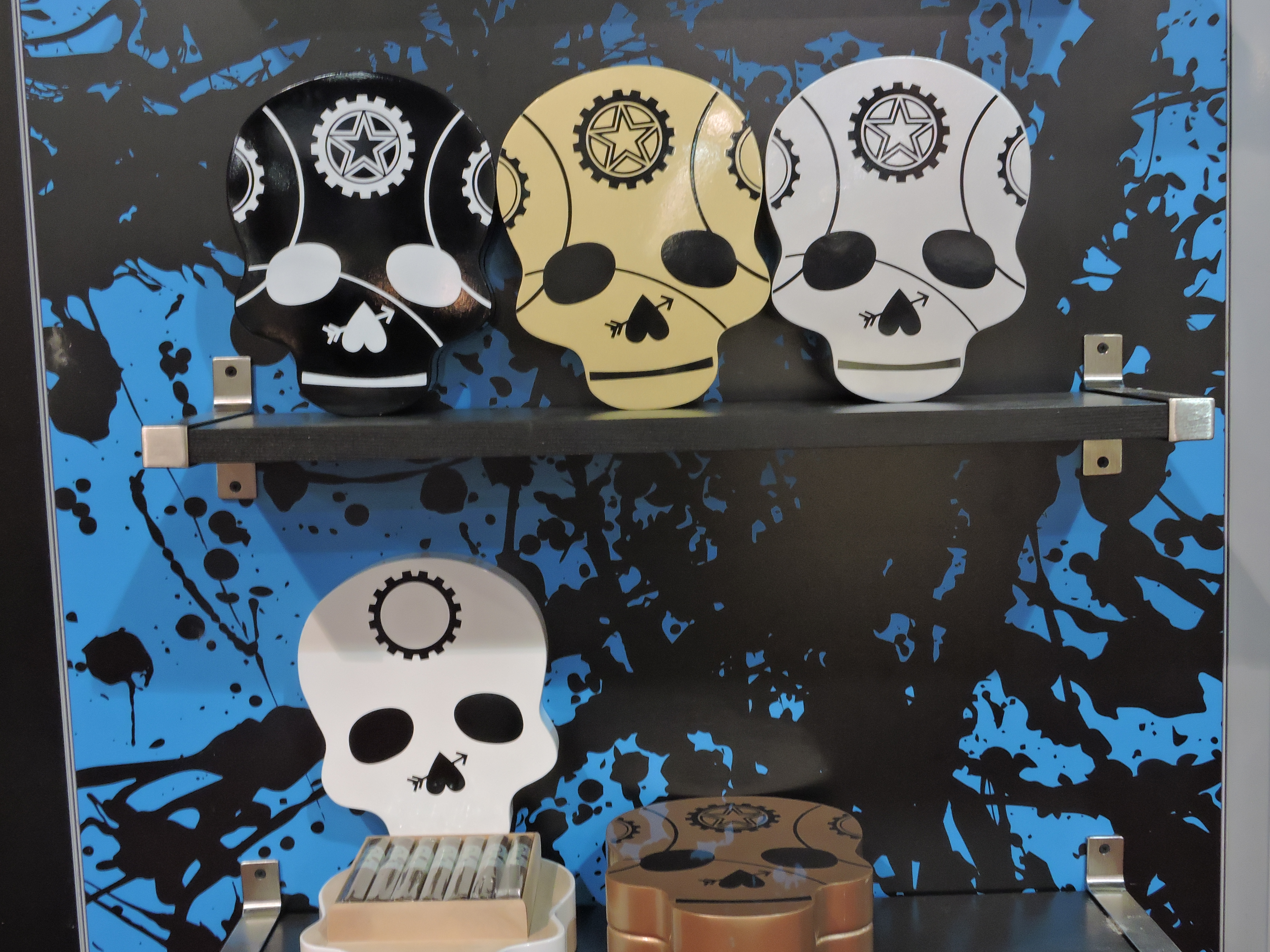 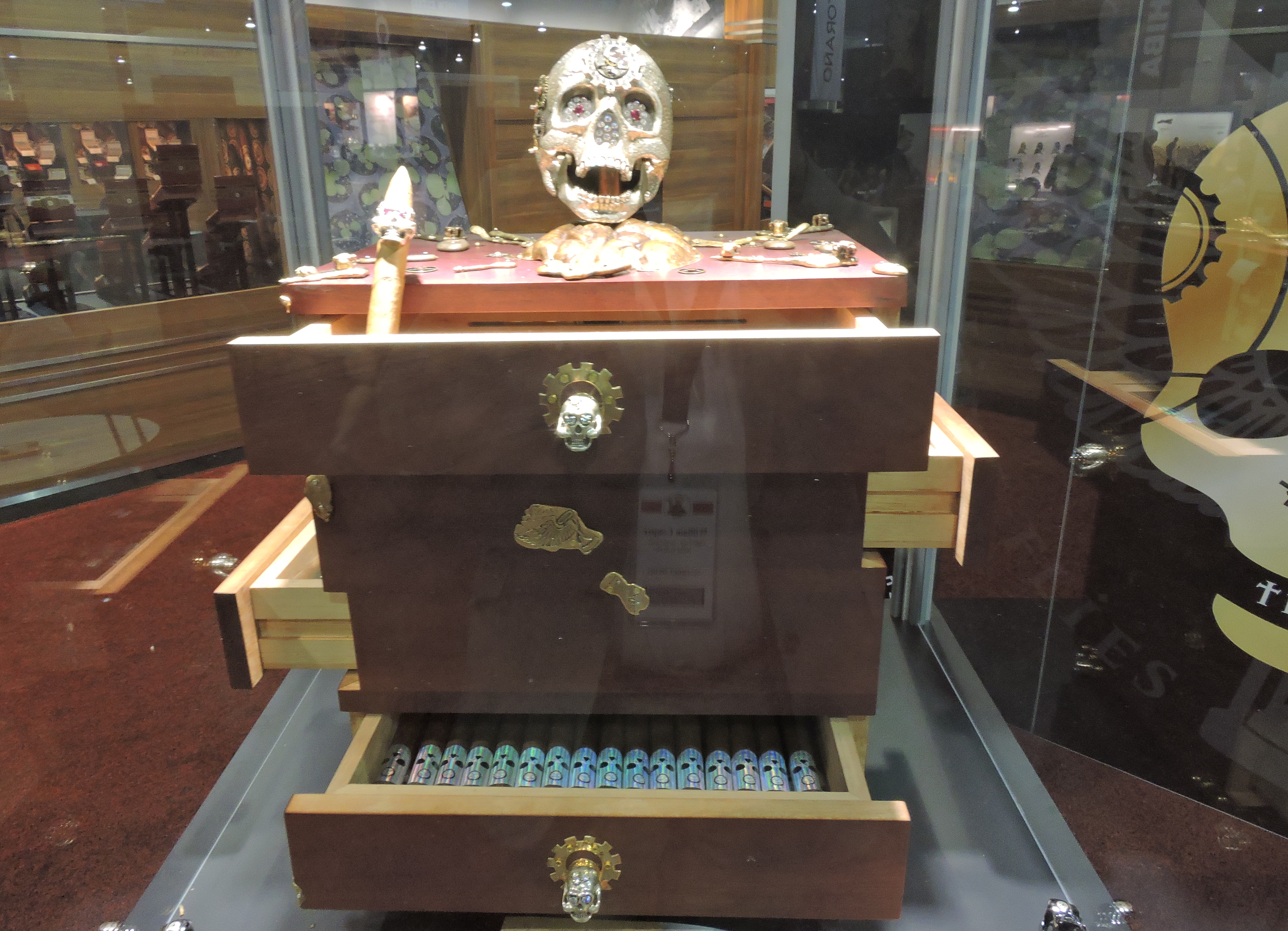 Foundry One of a Kind Humidor on Display at IPCPR – this contained a unique undisclosed blend made available to whomever purchased it.

For now, we turn our attention back to the regular production Time Flies offering and take a look at what this cigar brings to the table.

The regular production Time Flies is offered in four sizes packaged in 20 count boxes. Each of the four sizes have a unique colored box (listed with the size below). 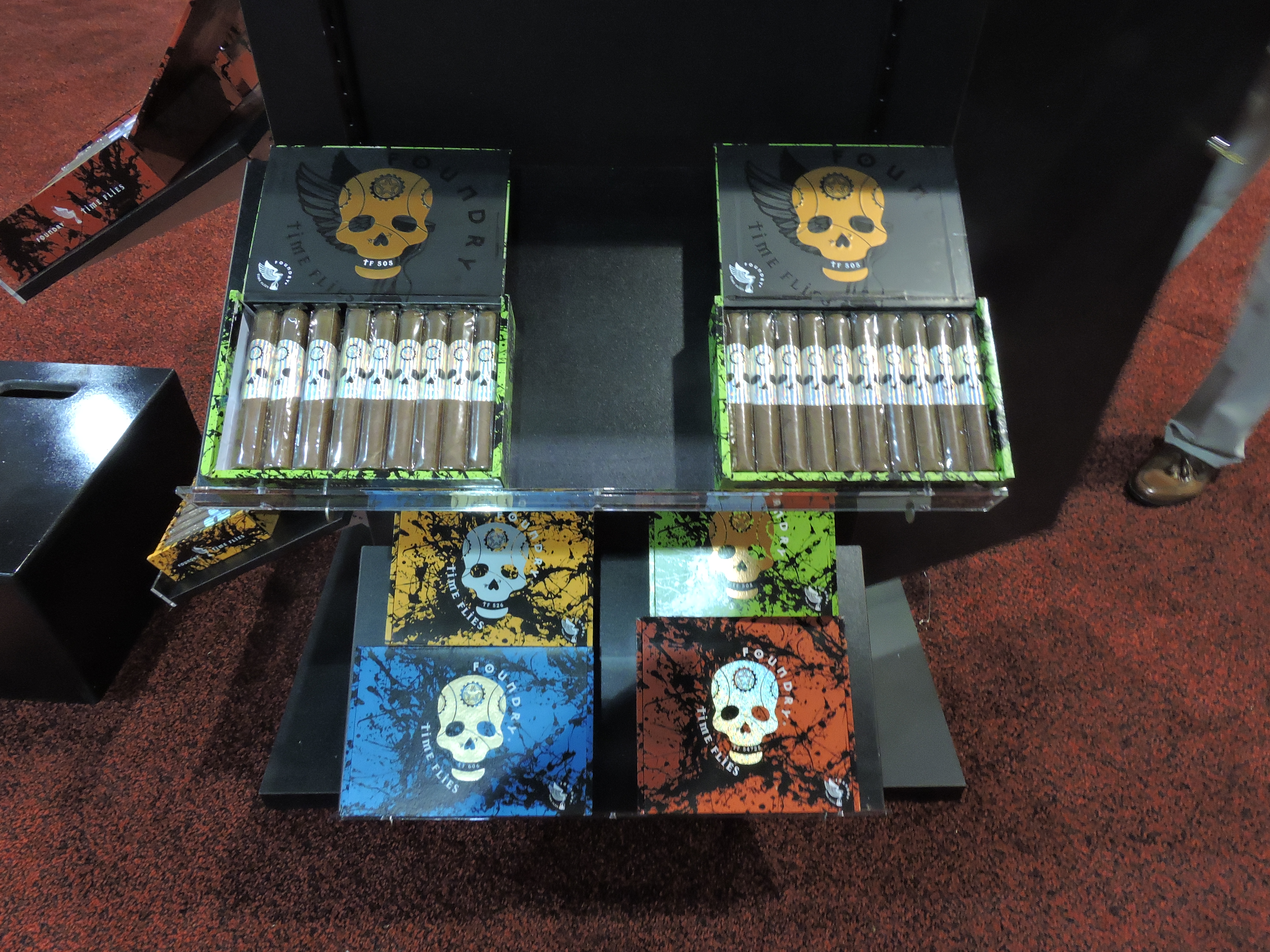 The Habano 2000 wrapper has a medium to dark brown color. The surface of the wrapper has some oil on it. While there were some thin visible veins and thin visible wrapper seams, I considered this to be a wrapper that was on the smooth side.

The band on Time Flies features a holographic skull design. There are twelve sayings in black font in landscape mode. Six are on the left side of the band, while the other six were on the right. The sayings include: “IMPRESS YOURSELF, RAISE SOME EYEBROWS, CHALLENGE THE WORLD, EXCEED EXPECTATIONS, JUST GO, SEIZE THE DAY, EXPECT THE UNEXPECTED, LEAVE A MARK, START SOMETHING, CALL YOUR MOTHER, FINISH SOMETHING, HELP A FRIEND, MAKE A STATEMENT, SET A GOAL” 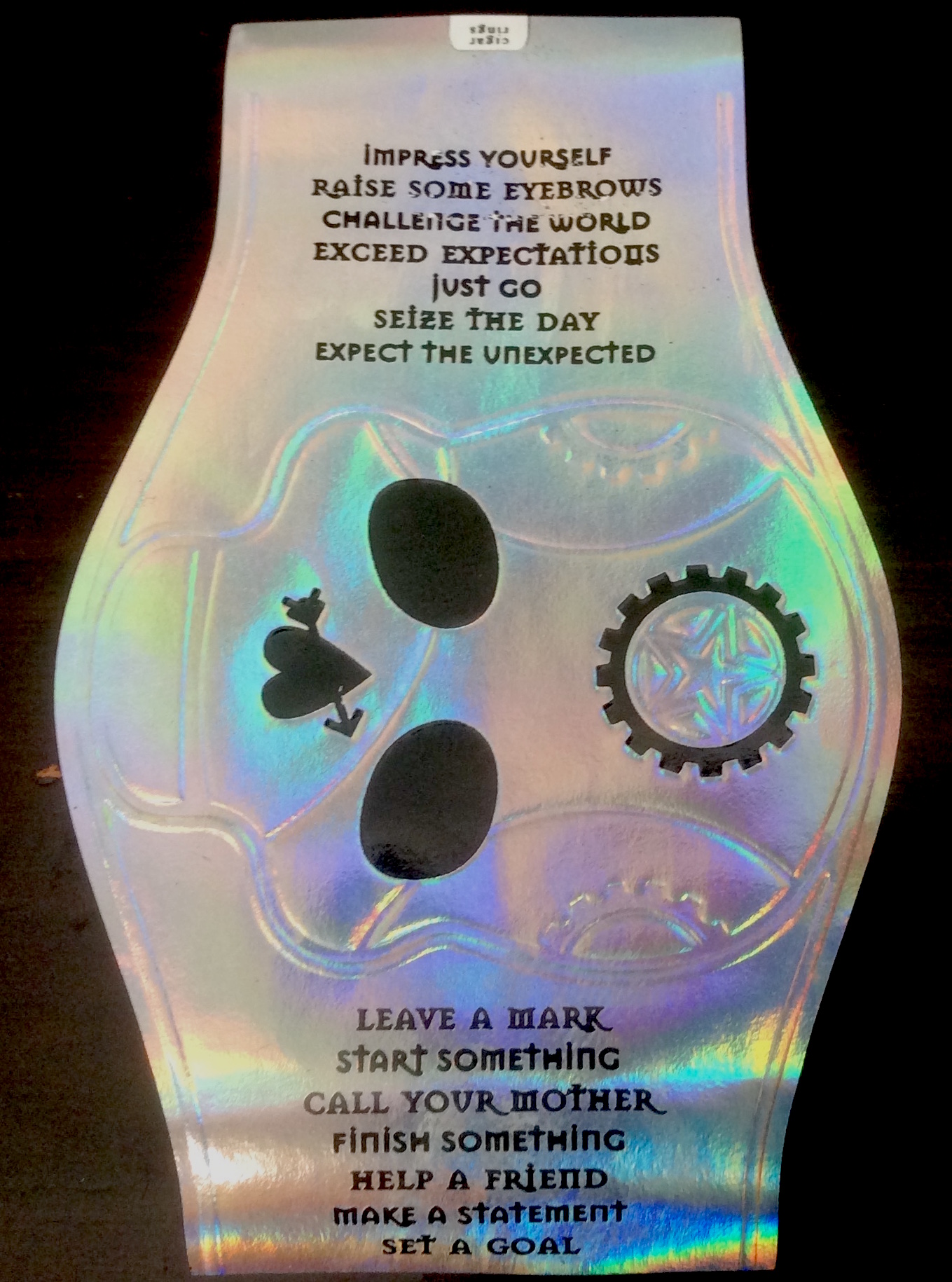 Band of the Foundry Time Flies (side view)

Prior to lighting up the Time Flies 550, I went with my usual choice of a straight cut to remove the cap. Once the cap was clipped I moved on to the pre-light draw. The dry draw delivered a mix of cocoa, earth, and some citrus notes. Overall I considered this to be a satisfactory pre-light draw. At this point I was ready to light up the Foundry Time Flies 550 and see what the smoking phase would have in store.

The start to the Time Flies 550 continued the notes of cocoa, earth, and citrus. There also was some red pepper that was a part of the equation. During the early stages, the chocolate and earth notes moved to the forefront while the citrus and red pepper settled in the background. The red pepper was also prominent on the retro-hale.

The last third of the Time Flies 550 saw the earth notes remain primary. The red pepper had closed in on the forefront, but it never became overpowering on the palate. There still was a touch of citrus, chocolate, and classic wood that remained. This is the way the cigar experience came to a close. The resulting nub was cool in temperature and firm to the touch.

The Foundry Time Flies 550 maintained a straight burn path from start to finish. I also found this cigar to have a straight burn line. This cigar required a low amount of touch-ups. The resulting ash was gray in color. This was not the firmest ash, but it was not a loose or flakey one. The burn rate and burn temperature were both ideal. 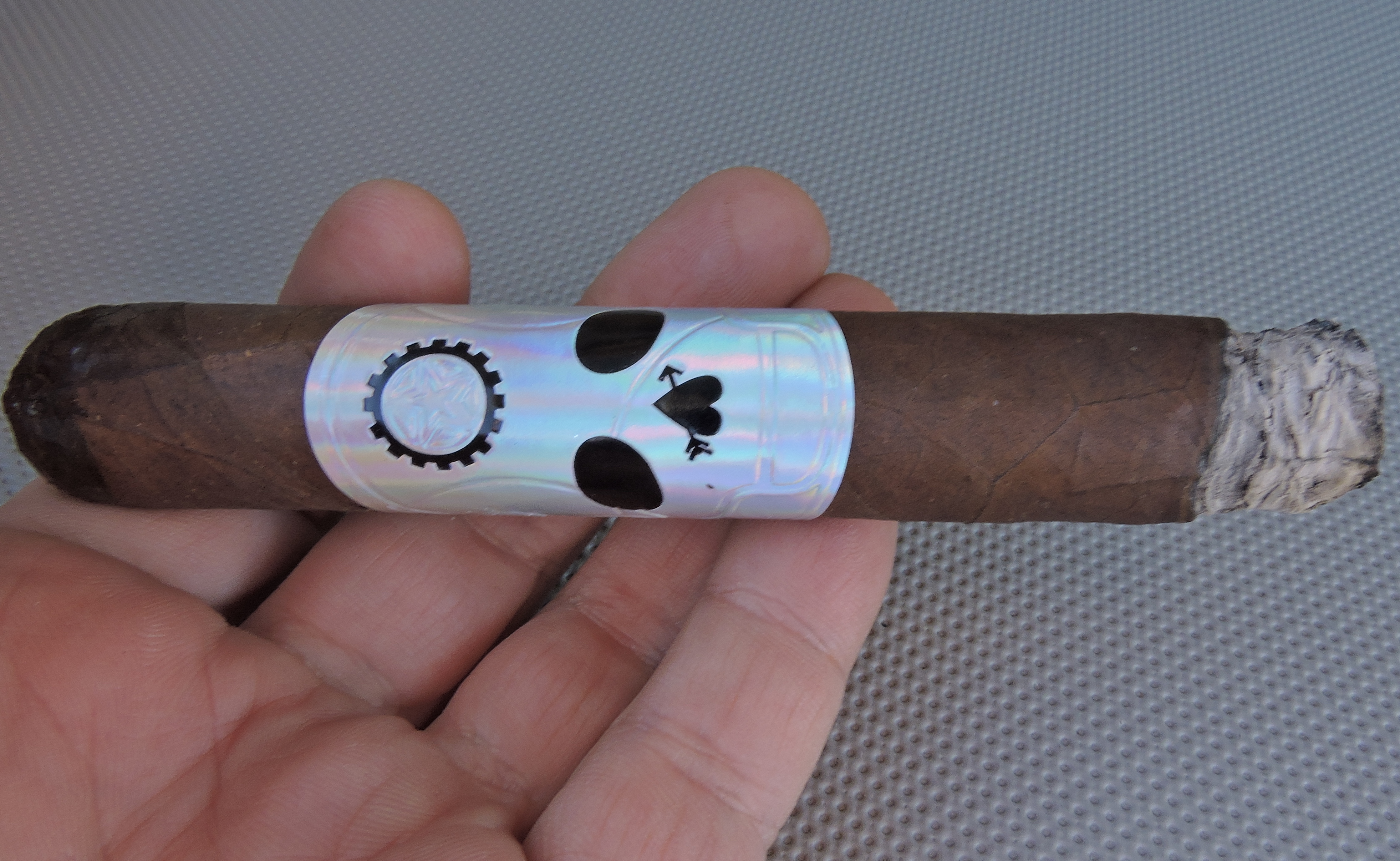 Burn of the Foundry Time Flies 550

The draw to the Foundry Time Flies 550 also performed quite well. This was a draw that was on the open, but not loose side. This made the Time Flies 550 a low maintenance cigar to derive flavor from.

Throughout the smoking experience, I found both the strength and body to balance each other nicely with neither attribute overpowering the other.

Overall, I found the Foundry Time Flies 550 to be quite an enjoyable smoke. This is one of these cigars that isn’t going to do anything radically different from a Habano wrapped Nicaraguan cigar – but what it does do, it does very well. The medium strength and medium-bodied profile meshed quite well with the flavors this cigar produced. What I also liked about this cigar is it will deliver a spicy component, but it won’t be overpowering. This is a cigar I would recommend to either a novice or experienced cigar enthusiast. As for myself, this is a cigar I would smoke again – and it’s one that is worthy of a box split.