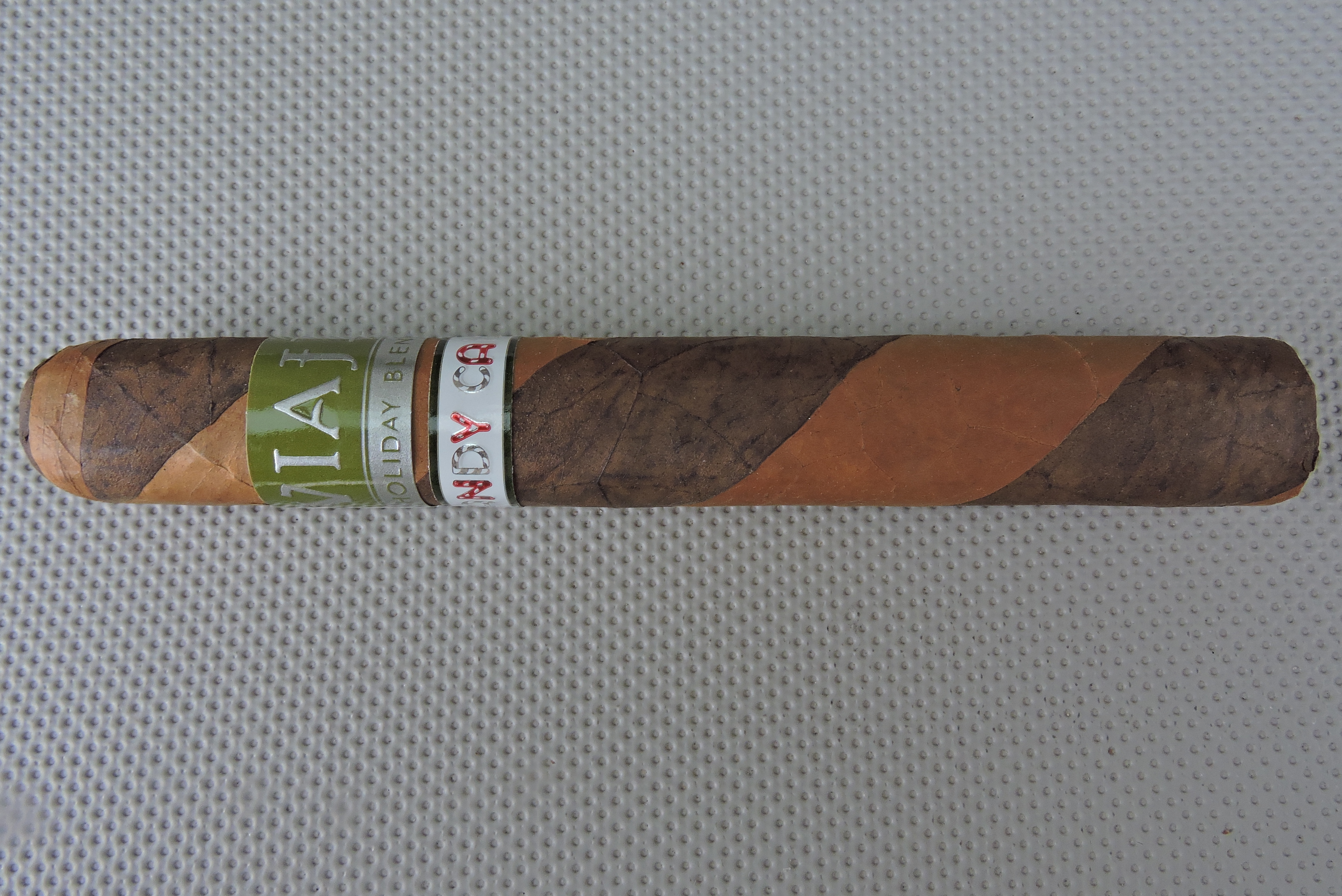 Without further ado, let’s take a closer look at the Viaje Holiday Blend Candy Cane Edicion Limitada 2015 and see what this cigar brings to the table.

The barber-pole features a combination of Brazilian Arapiraca and Ecuadorian Habano tobacco. These are not common tobaccos we have seen in the Viaje portfolio. Brazilian Arapiraca was the wrapper used on the Viaje Holiday Blend 2015 while Ecuadorian Habano was seen on the Viaje Collaboration 2015. The remaining part of the blend have not been disclosed. As mentioned this cigar is produced at the PDR Cigars factory in the Dominican Republic. 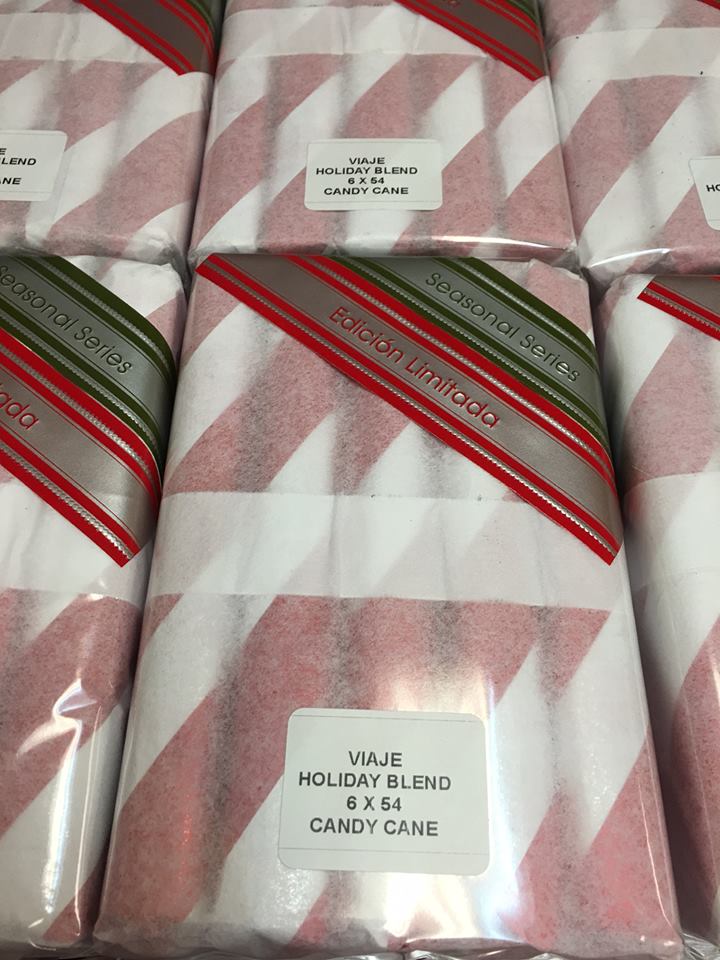 The structure of the Viaje Holiday Blend Candy Cane Edicion Limitada 2015 barber-pole features the natural colored Ecadorian Habano wrapper wrapped around the coffee bean colored Brazilian Arapiraca wrapper. There is a light coating of oil on both wrappers. The wrapper seams are for the most part on the clean side. As for box-press it is more on the Cuban-style soft-press side. 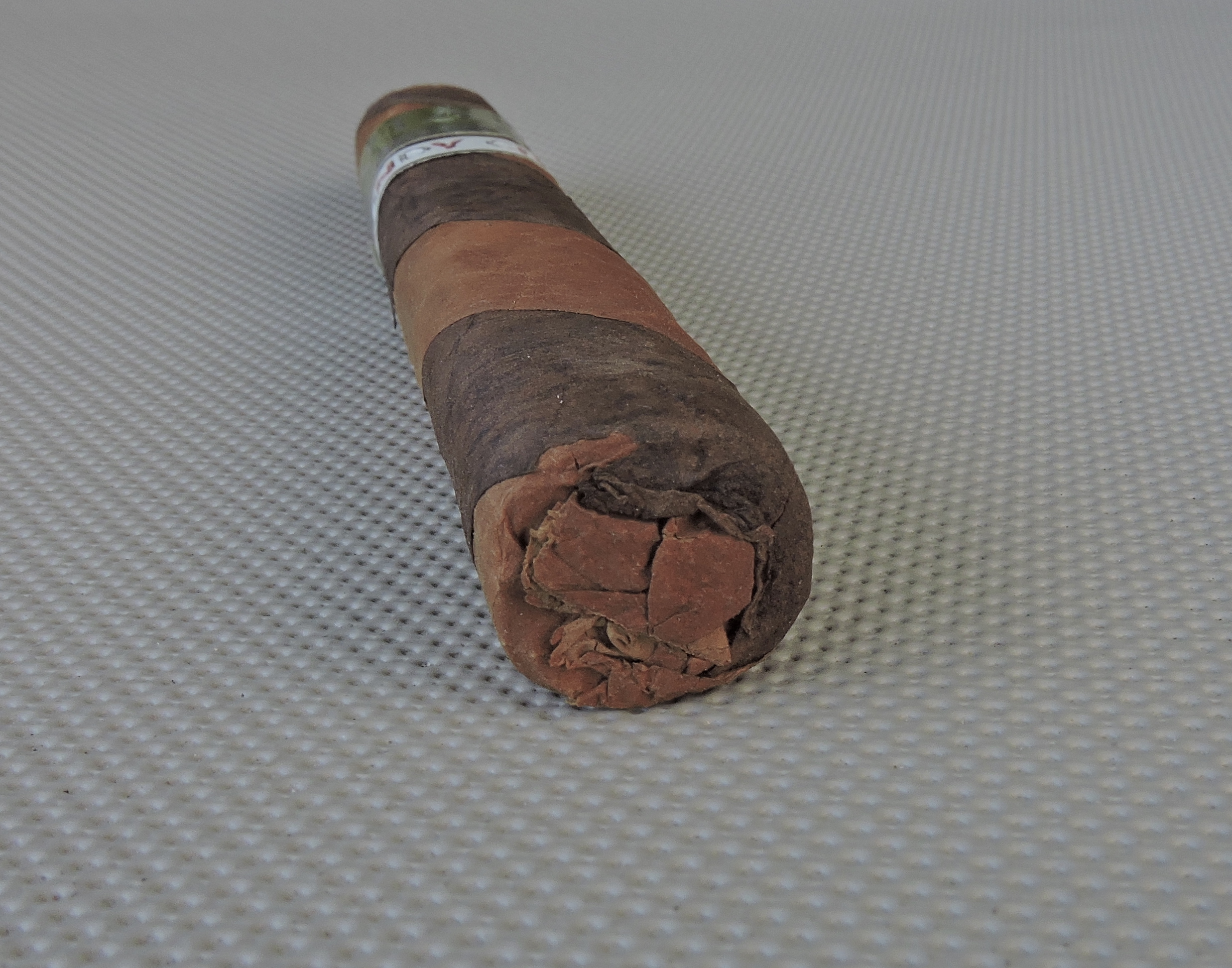 The secondary band rests just below the primary band. This band is white with olive pinstripes on top and bottom. The text “CANDY CANE” is prominently displayed in a silver and red “candy cane” styled font.

Each individual cigar is wrapped in red an silver foil-like paper. 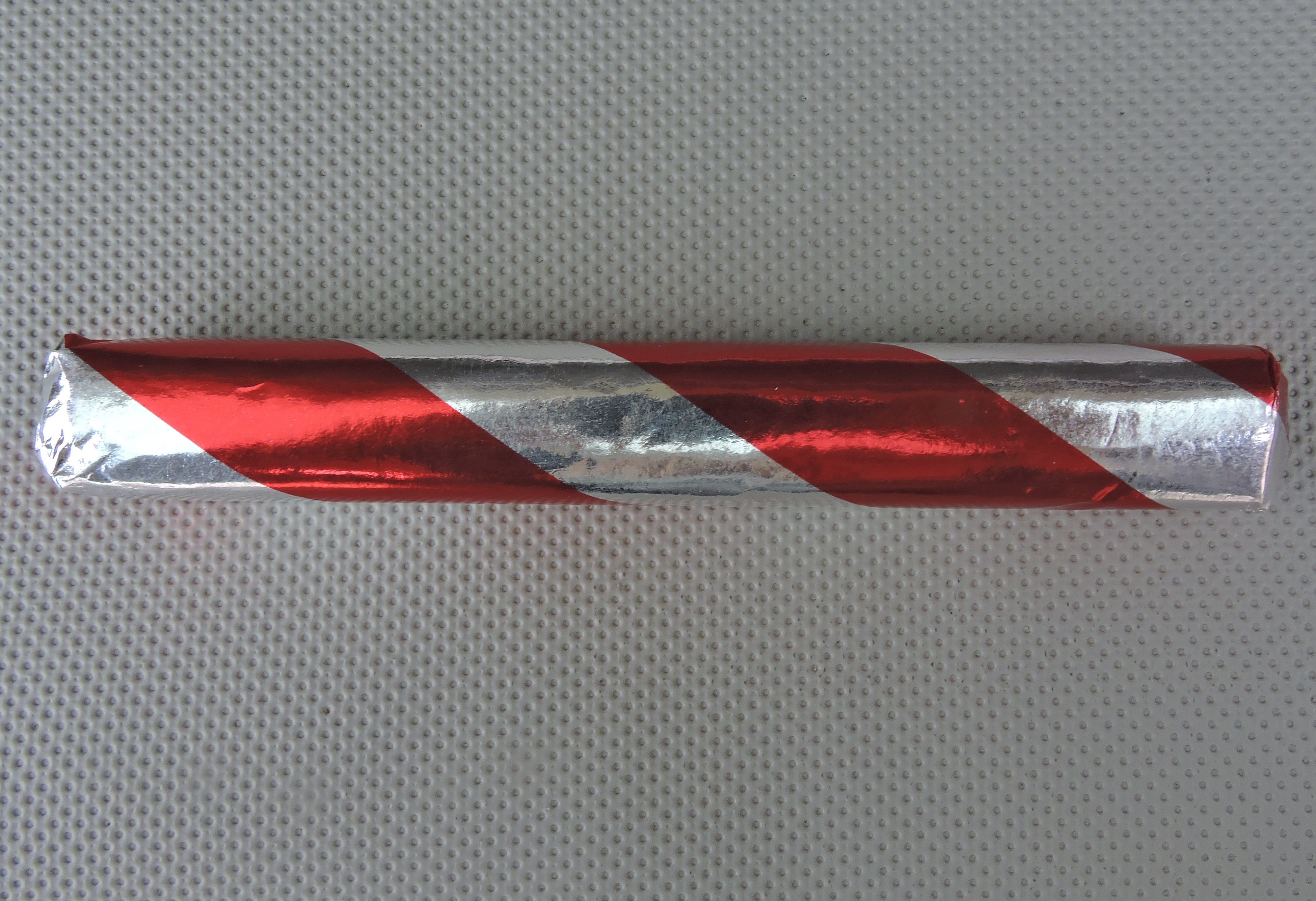 As I normally do, I went with a straight cut to remove the cap of the Candy Cane Edicion Limitada 2015. Once the cap was successfully clipped, I moved on to the pre-light draw. The cold draw delivered a mix of coffee, dusty earth, and a slight cedar note. Overall I considered the pre-light draw to this cigar to be very good. At this point, I was ready to light up the Viaje Holiday Blend Candy Cane Edicion Limitada 2015 and see what this cigar would bring to table.

The Viaje Holiday Blend Candy Cane Edicion Limitada 2015 started with notes of cedar and wood. As the cigar progressed through the early stages of the first third, coffee notes emerged in the forefront. Meanwhile the wood / cedar combination receded into the background where it was joined by some dusty earth notes. I also detected an underlying creamy texture that kept this cigar quite smooth. There also was a touch of black pepper on the tongue, but it was more prominent on the retro-hale.

During the first half, I found the coffee notes did get richer while the creamy texture got softer. There wasn’t much change in the flavor profile. The coffee remained primary while the wood / cedar, dusty earth, and subtle pepper remained in the background.

Around the midway point of the Candy Cane Edicion Limitada 2015, the cedar / wood combination increased in intensity. Before the second third was over, the cedar / wood  displaced the coffee notes as the primary flavor. The coffee remained a close secondary note for the duration of the cigar. There was a slight increase in overall spice, but this cigar was far from being a spice bomb. In addition, by this stage the cream noteshad  also diminished. As the Candy Cane Edicion Limitada 2015 came to a close, it finished with a firm nub that was cool in temperature.

The burn to the Viaje Holiday Blend Candy Cane Edicion Limitada 2015 maintained a straight burn path and straight burn line. I did find at certain points as the burn crossed a wrapper seam, the Candy Cane required a slight touch-up, but overall I didn’t find the amount of touch-ups to be excessive – and it didn’t represent any issues. The resulting ash was tight and firm with a nearly white color. Meanwhile the burn rate and burn temperature 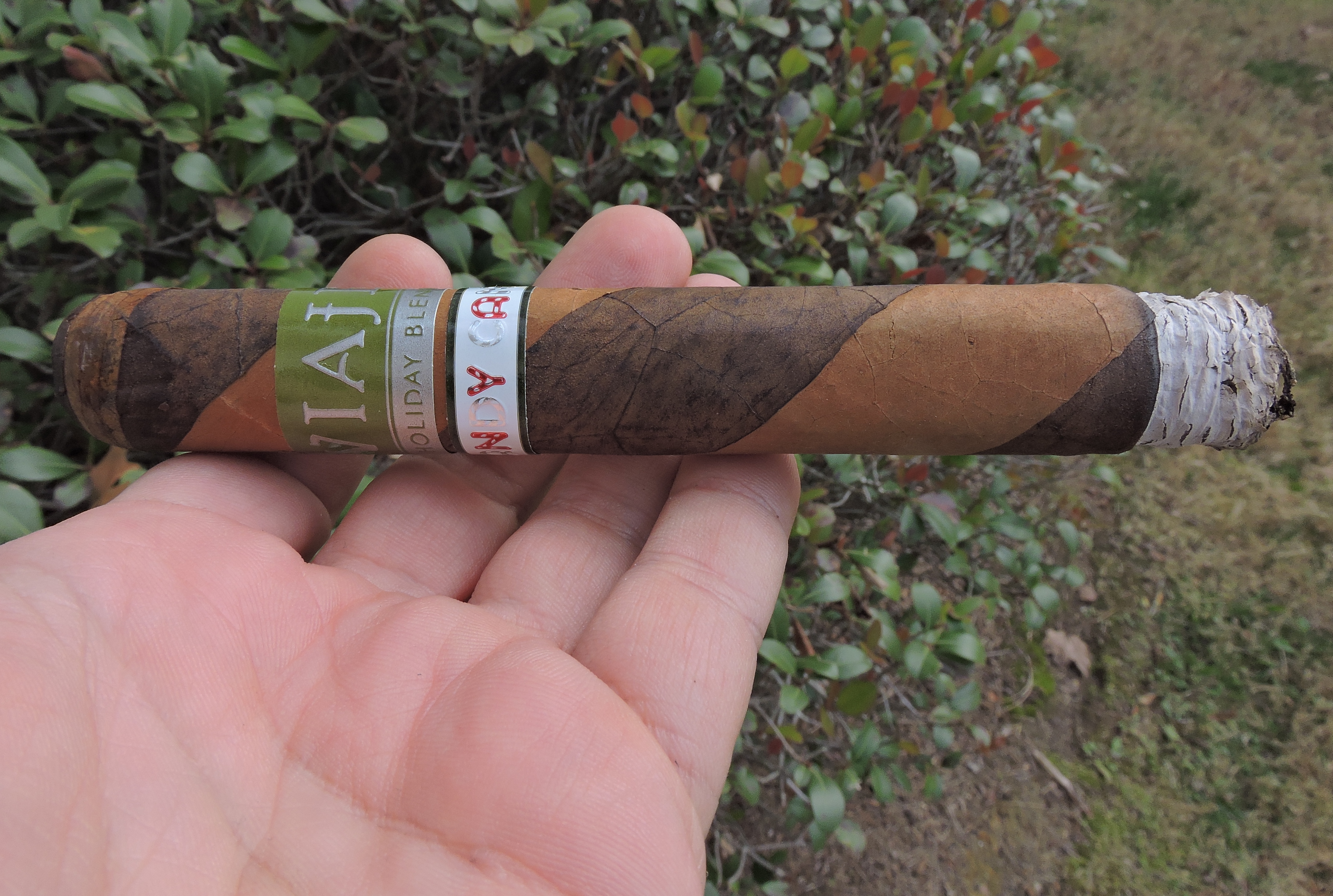 The draw to the Viaje Holiday Blend Candy Cane Edicion Limitada 2015 also performed quite well. I found this draw to be not too loose, nor too tight. This made the Candy Cane an enjoyable cigar to smoke from start to finish.

Over the years, I have found the regular Viaje Holiday Blend cigars to rank among some of the boldest cigars that Viaje offers. This was maintained in 2015 when the Holiday Blend changed the blend and moved production to PDR. On the other hand, the Candy Cane releases have been more dialed back. The Candy Cane Edicion Limitada 2015 is going to fall into this category. The cigar started as a medium strength, medium-bodied cigar. By the second half both attributes increased in intensity and progressed to medium to full territory.

In terms of strength versus body, both attributes balanced each other very nicely with neither attribute overshadowing the other.

One thing that I have always liked about the Viaje brand is that it has brought a little extra fun to cigar smoking. In addition, one thing I like about barber pole cigars is that they are fun. The Candy Cane series has brought the fun of smoking a Viaje and the fun of smoking a barber pole together. In addition to being fun, the new blend introduced for 2015 was pretty good as well. While the 2015 edition is using very different tobaccos than the previous iterations, I still think Viaje has done a good job keeping to the original Candy Cane’s wheelhouse flavor-wise (a medium strength, medium-bodied smoke with coffee and cedar notes). Overall this is a cigar I could recommend to a novice or experienced cigar enthusiast. As for myself, this is a cigar I would smoke again. If you can find the 2015 edition, it’s worthy of a box (bundle) purchase.