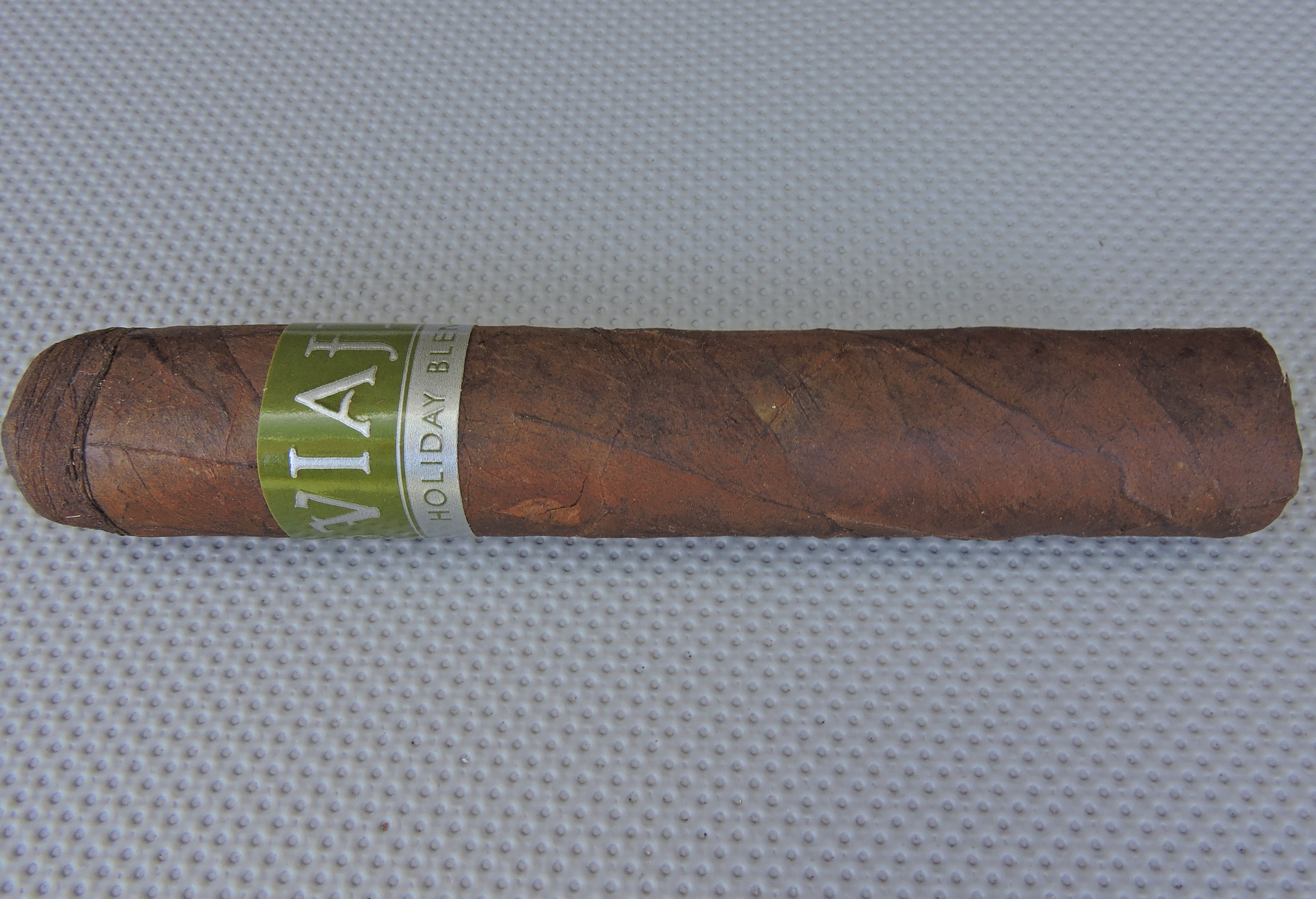 There have been some other releases by Viaje that have been released along the way with the year end holiday theme. This includes 2013’s Viaje Holiday Christmas Tree, and the Viaje Holiday Blend Candy Cane. The Candy Cane is a barber-pole wrapped blend that was released in 2012 and 2014. Like the Holiday Blend 2015, the Candy Cane 2015 underwent similar changes – namely a new factory, new blend, and a box-press released.

Without further ado, let’s explore the Viaje Holiday Blend 2015 and see what this cigar brings to the table.

The shifting of some production to PDR Cigars has given Viaje found Andre Farkas an opportunity to play with some new tobaccos. For the Viaje Holiday Blend 2015, the cigar features a Brazilian Arapiraca wrapper. From all indications this appears to be the first time this wrapper has appeared on a Viaje blend. The other components of the blend were not disclosed.

The Brazilian Arapiraca wrapper of the Viaje Holiday Blend 2015 has a dark roasted coffee bean color. Upon closer examination, there is some darker marbling that can be seen on the surface. The wrapper has a coating of oil on it. There are some visible veins, but the dark color of the wrapper does a good job at hiding the wrapper seams. Keeping to the tradition of the Holiday Blend Series, the Holiday Blend 2015 features a covered foot. As for the box-press, it is a softer Cuban press style.

As I normally do, I went with my usual choice of a straight cut to remove the cap of the Viaje Holiday Blend 2015. Once the cap was removed, I commenced with the pre-light draw experience. The cold draw delivered a mix of coffee, floral, and cedar notes. Despite the covered footer, I found this cigar still delivered a nice amount of flavor on the pre-light. Overall I considered this to be a very good pre-light draw. At this point I was ready to light up the Holiday Blend 2015 and see what the smoking phase would have in store.

The Viaje Holiday Blend 2015 started out with a mix of coffee, cedar, red pepper, and cream. The coffee and cream notes moved into the forefront while the cedar and red pepper became secondary notes. The combination of the coffee and cream notes had an inherent smoothness to it. Meanwhile, while red pepper and cedar was in the background on the tongue, the retro-hale was a different story – namely. I found the red pepper to be prominent on the retro-hale and to a lesser extent I picked up some cedar notes.

During the second third, the coffee and cream notes still were prominent. I also detected some generic wood notes in the forefront. There was a slight musty component sometimes I get from Brazilian Arapiraca, but in this case I found it complemented the flavor profile nicely.

As the Viaje Holiday Blend 2015 moved into the last third, the coffee and generic wood notes still were the primary notes. I found the cigar lost some of its creaminess. There also was an increase in the red pepper and cedar, but these spices never eclipsed the coffee and generic wood notes. This is the way the cigar experience came to a close. The resulting nub was firm to the touch and cool in temperature.

Construction-wise, I’ve been pleased with what Viaje has been doing with PDR Cigars. The Holiday Blend 2015 is no exception. Overall this is a cigar that took a straight burn path. There was a slight waviness on the burn line, but this didn’t warrant any excessive touch-ups. The resulting ash was a silvery gray color with some darker spots. While the ash was primarily firm, there was some minor flaking along the way. Meanwhile the burn rate and burn temperature were ideal. 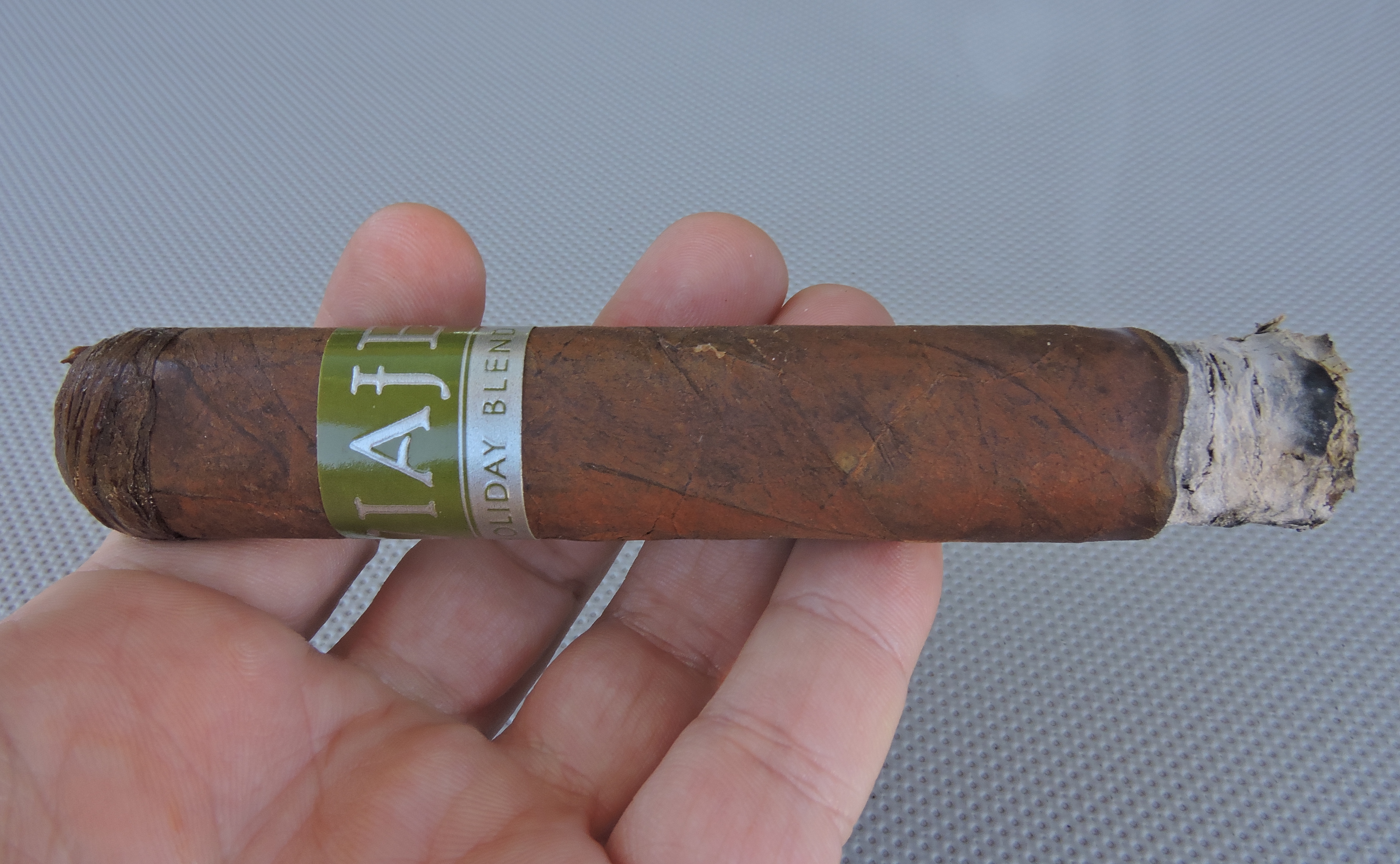 Burn of the Viaje Holiday Blend 2015

The draw to the Holiday Blend 2015 was open, but not loose. I did find that this cigar had a large number of smoke production.

When it comes to strength versus body of the Holiday Blend 2015, I gave a slight edge to the strength.

Quietly, Viaje has delivered some very nice releases with the PDR Cigars factory. I chalk the Viaje Holiday Blend 2015 as another very good cigar to come out of this factory. I liked the fact that this edition of the Holiday Blend maintained the power and robustness of the ones that have come out of Honduras. Flavor-wise, the coffee notes did remind me of some of the previous iterations of the Holiday Blend. At the same time, the use of the Brazilian Arapiraca wrapper was clear on this cigar – namely with some of the woody and musty notes. Finally, the box press was a nice change of pace for this cigar.