Agile Cigar Reviews replace what we termed “Assessment Updates”. The concept is the same, but the name is different. Agile Cigar Reviews use a lightweight, shorter format. These will never take the place of our comprehensive reviews. They are only used on blends we have previously assessed. This might be a blend we are re-scoring or providing a score for a first time. It might be a blend we are looking at in a different size. Today we look at the Viaje Friends and Family Edicion Limitada Le Joueur. The Friends and Family Blend has been assessed several times on Cigar Coop – most recently back in March, 2013. 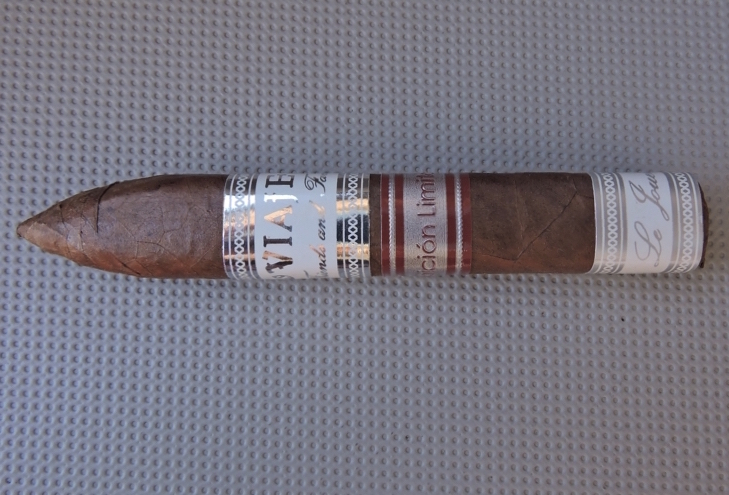 As for the blend of the Viaje Friends and Family, Farkas isn’t disclosing the details. Since 2012, each size has been released in an individual batch.The one interesting thing is that there have actually been two vitolas known as Le Joueur. In 2013, the second size of Friends and Family was also known as “Le Joueur” was released. That cigar was a 5 x 52 box-pressed Robusto while the Edicion Limitada Le Joueur version is a box-pressed torpedo.

The Viaje Friends and Family Edicion Limitada Le Joueur delivers a mix of red pepper, coffee, and natural tobacco, with a slight creamy texture. Early on I found the coffee notes to be the primary notes with the red pepper, natural tobacco, wood secondary. While not a classic “mocha” note (what I consider to be a fusion of coffee and chocolate), there were times I did pick up a slight mocha note. Toward the second half, some of the sweetness present from the natural tobacco diminished and the red pepper became more prominent.

The Friends and Family line is one of the best Viaje has to offer. In pariticular I found the Churchill size Cadeau and Robusto version of the Le Joueur to shine. The Edicion Limitada Le Joueur torpedo wasn’t quite up to those two sizes, but it still is a very good cigar. While it can fill the role of a short smoke, when it comes to the Friends and Family line, I prefer a longer, relaxed smoke. It is still a cigar I would recommend to a novice or experienced cigar enthusiast. As for myself, I would smoke it again and it is worthy of a fiver in the humidor.