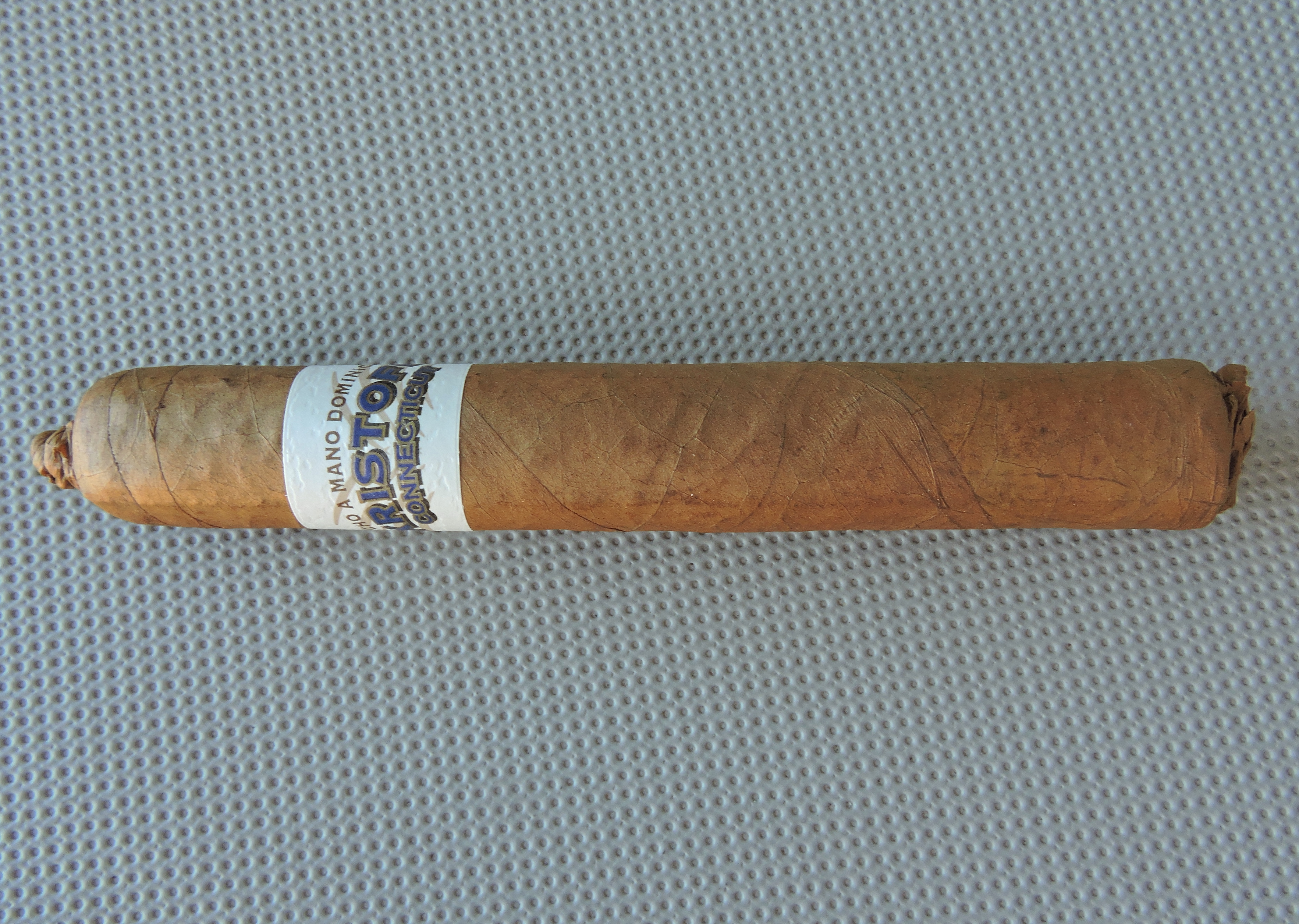 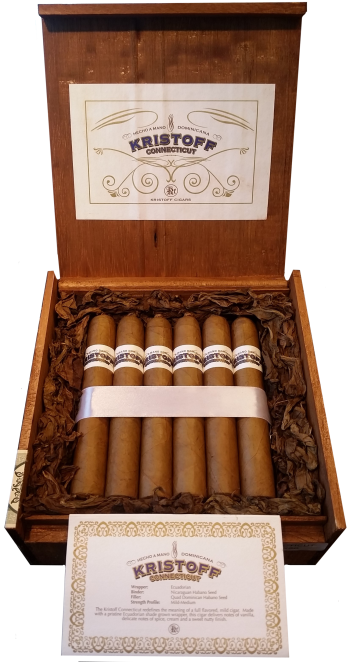 Without further ado, let’s take a closer look at the Kristoff Connecticut Robusto and see what this cigar brings to the table.

The Kristoff Connecticut is available in four sizes. The line is skewed toward larger ring gauges. All four sizes have a  50 or larger ring, and three of the four have a 54 plus ring.

Each of the four sizes are packaged in 20 count boxes.

The Ecuadorian Connecticut Shade wrapper of the Kristoff Connecticut Robusto has a light brown color with a slightly weathered look to it. There was a slight sheen to the wrapper. The cigar had some thin visible veins and thin visible wrapper seams. The cigar also features a covered foot and a “bun-style’ pig-tail cap.

The band is rugged-looking white paper band – again in what I consider to be in the “Kristoff style”. The band uses a blue-colored font with gold trim. On the center of the band is the text “KRISTOFF” arranged in the company’s signature style. Just below that text is text “CONNECTICUT”. Above the “KRISTOFF” text is the text “HECHO A MANO DOMINICANA. The band is finished with some gold adornments and the Kristoff logo on the far right.

As I normally do with pig-tail caps, I opted to place a straight cut and simultaneously remove the cap and the pig-tail of the Kristoff Connecticut Robusto. Once the cap was removed, I proceeded with the pre-light draw phase. The dry draw delivered a mix of classic wood and cedar notes. Overall this wasn’t the most exciting pre-light draw, but since this is not factored into the score, there was no loss of points here. At this point I was ready to light up the Kristoff Connecticut Robusto and see what the smoking phase would have in store.

The Kristoff Connecticut Robusto continued with the classic wood and cedar notes from the pre-light draw. The cedar notes delivered a nice combination of sweetness and spice. In the background there were some creamy notes. There also was a very subtle astringent note in the background. Eventually the cedar notes took control as the primary note. The classic wood and cream notes became secondary while the astringent note dissipated. On the retro-hale, I picked up notes of black pepper.

By the last third of the Kristoff Connecticut Robusto, the cedar notes still were in the forefront, but now had more of a spicy component. The cream and woody notes were still in the background. This is the way the cigar experience came to a close. The resulting nub was firm to the touch and cool in temperature.

Burn-wise, the Kristoff Connecticut performed very well. The cigar maintained a straight burn path from start to finish. There was a slight curvature on the burn line, but this was remedied with some touch-ups. Overall I didn’t find this cigar needed an excessive amount of touch-ups. The resulting ash was tight and firm with a salt and pepper color. The burn rate and burn temperature were both ideal. 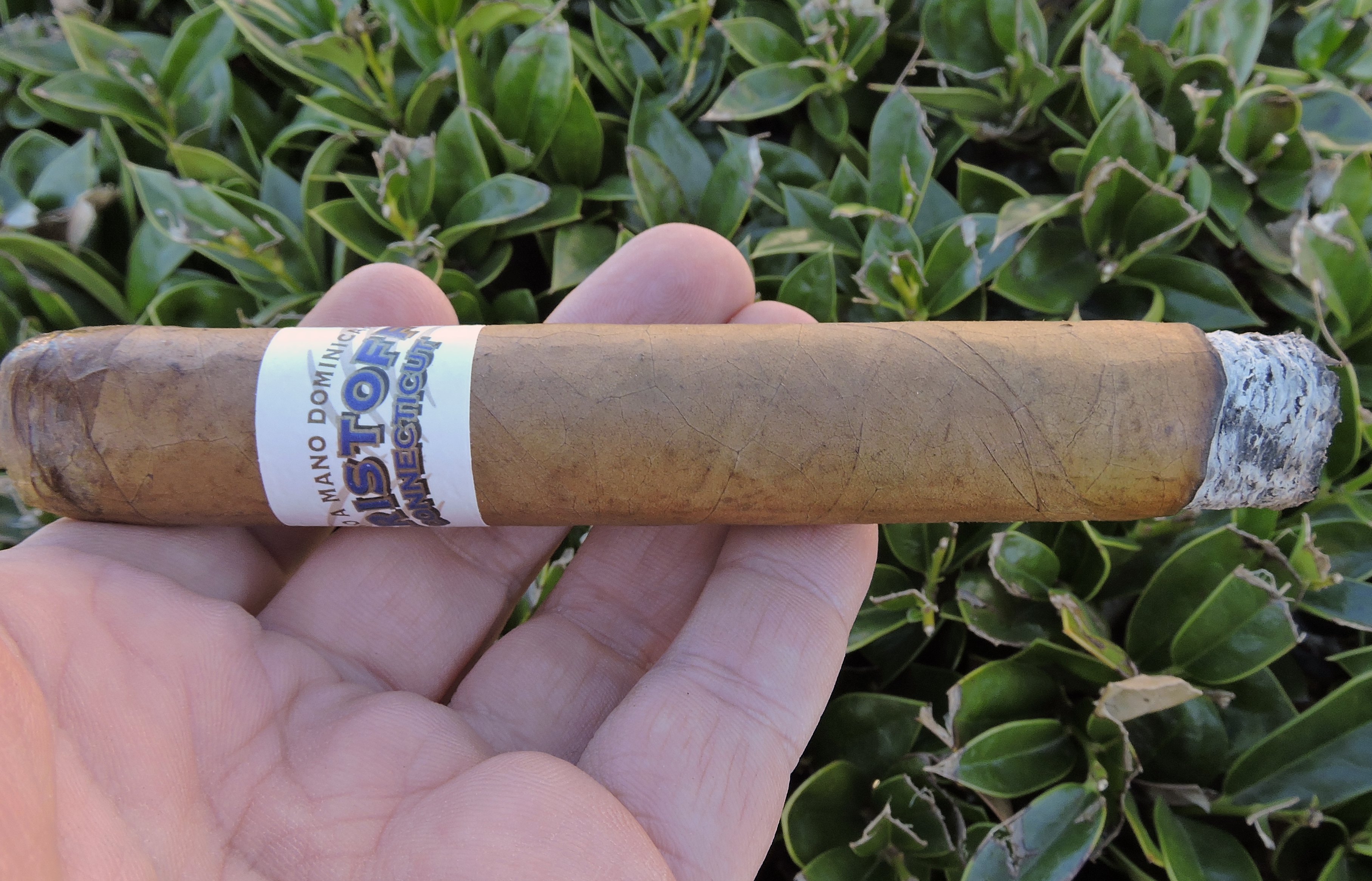 When it comes to bolder cigars on terms of strength and body, you don’t hear Kristoff’s name come up. Quietly Case has built a portfolio with several bold cigars including the GC Signature, Kristoff Criollo Maduro, and the Pistoff Kristoff.  The Kristoff Connecticut Toro isn’t going to follow in that path, nor is it going to try to redefine what a Connecticut Shade cigar is. It is a cigar that will be on the upper end of mild to medium cigar in terms of strength and body. During the smoking experience, I found both the strength and  body to balance each other nicely with neither attribute overshadowing the other.

I like how over the past couple of years, Kristoff has gotten back to its roots with the rough cut boxes, loose tobacco packing, and pig-tail caps. It is also great to see a Connecticut Shade offering packaged with what I call the “Kristoff Style”.  The Kristoff Connecticut Robusto delivered is solid. it isn’t overly complex, but does the job well. It provides the right amount of creaminess and woody notes I look for in a Connecticut Shade cigar. Not only does it fit the bill for “morning smoke with a cup of coffee”, but it’s a nice anytime of the day smoke. It’s a cigar I’d recommend to any cigar enthusiast. As for me, the Kristoff Connecticut Robusto is a cigar I’d reach for again and it’s worthy of having a fiver in the humidor.