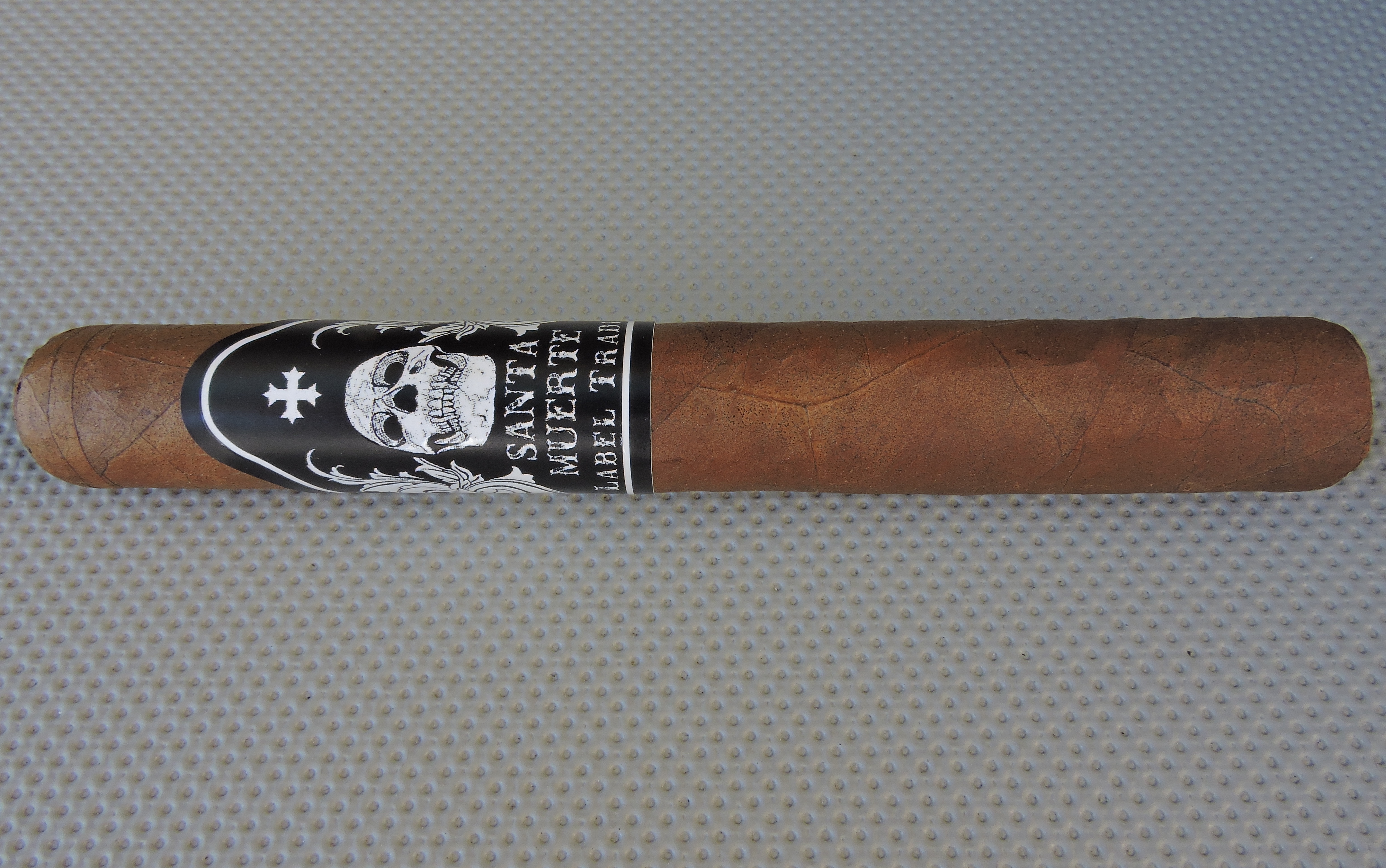 This past Fall, Black Label Trading Company launched a new small batch cigar line called Santa Muerte. Santa Muerte is a figure associated with the Day of the Dead celebrations. These celebrations provide remembrance to those who have passed away. With the Santa Muerte cigar, it also pays tribute to those who are no longer with us. Day of the Dead festivities are typically held from October 31st through November 4th and the first batch of the Santa Muerte was released to coincide with these celebrations. Recently I’ve had an opportunity to smoke the Black Label Trading Company Santa Muerte in the Corona Gorda format. 2016 was a year that saw owner James Brown take a major step forward as a cigar manufacturer. The Santa Muerte is another step that Brown and his brands journey take forward as this is another excellent release.

The philosophy that Brown has incorporated for both Black Label Trading Company and its sister brand, Black Works Studio has been a small batch “less is more” philosophy. Back in February 2015, Brown made a bold move as he opened Fabrica de Oveja Negra, his own factory in Nicaragua. This has allowed him to take a more hands-on, intimate approach to his company’s work

Without further ado, let’s take a closer look at the Black Label Trading Company Santa Muerte Corona Gorda and see what this cigar brings to the table.

While Santa Muerte utilizes an Ecuadorian Habano leaf on both the wrapper and binder, the filler consists of tobaccos from Nicaragua, Mexico, and the Dominican Republic.

Santa Muerte has been released in two sizes. Each size is packaged in 20 count boxes.

The Black Label Trading Company Santa Muerte Corona Gorda’s Ecuadorian Habano wrapper had a medium brown color with a slight oily sheen. There were some visible wrapper seams and some thin visible veins. Overall I did find this Corona Gorda to be a well packed cigar.

The band has a black and white gothic / skull theme. Toward the lower center of the band is the text “SANTA MUERTE” in white gothic font. Just below that text is the text “BLACK LABEL TRADING COMPANY” in a smaller gothic white font.

As I typically do, I went with my usual choice of a straight cut to remove the cap of the Santa Muerte Corona Gorda. After the cap was clipped, I moved on to the pre-light draw. The dry draw of this cigar served up a mix of woody and malt notes. Overall I considered this to be a satisfactory pre-light draw At this point I was ready to light up the Santa Muerte Corona Gorda and see what the smoking experience would have in store.

The Santa Muerte Corona Gorda started out with a mix of cream, natural tobacco, nut, cedar and assorted mixed pepper notes. The cream, natural tobacco, and nut became the primary notes early on with the spices receding into the background. The creamy notes definitely gave this cigar a smooth profile. Meanwhile I also detected an addition layer of cedar on the retro-hale.

As the Santa Muerte Corona Gorda moved into the second third, the cream and natural tobacco notes still were in the forefront. Meanwhile, the nut flavor now floated between the forefront and background. The cedar component in the background had also increased in intensity. I also still picked up some pepper notes in the more distant background, but the retro-hale saw an increase in the black pepper component.

By the last third, the cedar notes joined the natural tobacco in the forefront. The nut and cream notes had now receded into the background with the pepper. While the pepper remained subtle on the tongue, it was now the main note on the retro-hale. This is the way the cigar experience of the Santa Muerte Corona Gorda came to a close. The resulting nub was firm to the touch and cool in temperature.

The Santa Muerte Corona Gorda maintained a straight burn path from start to finish. There was a slight curvature on the burn line early on, but this was remedied with a few touch-ups. Overall, this was a cigar that did not require an excessive amount of touch-ups to maintain its burn. The resulting ash had a light gray color. I also found this to be a firm ash that came off the cigar in clean chunks. Meanwhile the burn temperature and burn rate were both ideal. 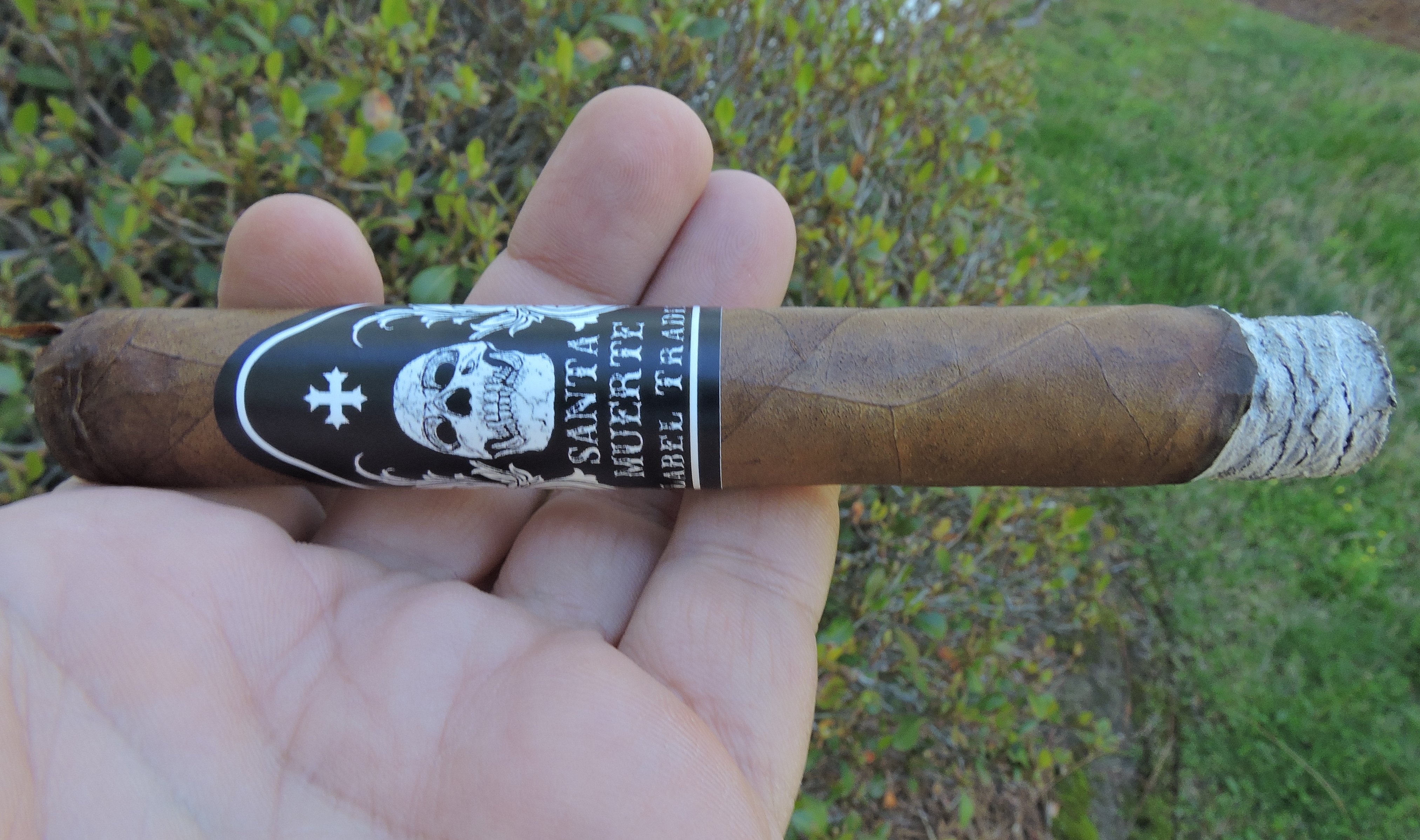 I commented earlier on that I felt the Santa Muerte Corona Gorda was a well-packed cigar. Sometimes that can tighten up the draw a little too much, but not in this case. This was a draw that was not too tight, but delivered the right amount of resistance in for my liking. The result was a low maintenance cigar to derive flavor from.

My first experience with the Santa Muerte Corona Gorda was about four months ago. At that time I found it to be a bolder cigar. However, some aging did mellow this cigar a bit and now I feel this cigar is in the sweet spot.

The Santa Muerte Corona Gorda started out as a medium strength, medium-bodied cigar. As I smoked the Santa Muerte, it gradually increased in intensity and around the 3/5 point, it was safe to say that the cigar had progressed to medium to full for both strength and body. During the smoking experience I found the strength and body balanced each other nicely with neither attribute having an edge over the other.

Over the past few years, Black Label Trading Company and its associated brand Black Works Studio has garnered a reputation for delivering some excellent maduro cigars. One could argue that some of the natural releases have gotten overshadowed. The Santa Muerte is a natural Habano offering and it comes through with flying colors – especially in the Corona Gorda size. It certainly is a cigar that builds on the story Brown and his brands are creating out of Fabrica Oveja Negra. Finally, its a cigar that seems to be getting better and better over time.

This is a cigar I could recommend to an experienced cigar enthusiast or a novice looking to graduate to something in the medium / medium plus range. As for myself, this is a cigar I would easily smoke again – and its certainly worthy of a box purchase.