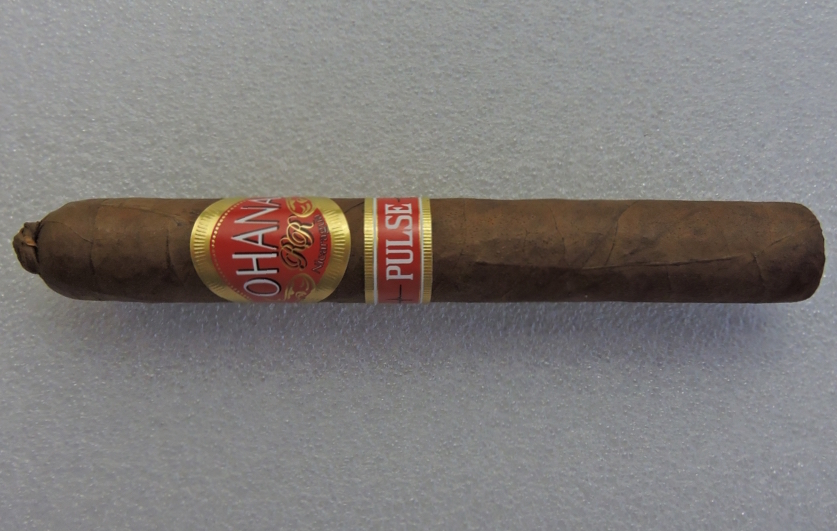 The name “Ohana” is Hawaiian for family and Pulse keeps to the brand’s theme. In a press release announcing the Pulse, Ryan Rodriguez explained, “Ohana is about family and friends and Pulse carries on with this belief. With every heartbeat, every pulse, our family and friends are the lifeblood of our existence. We are deeply humbled and honored by the support we have received in these first two years and now we honor you with Pulse.” For the Ohana Pulse line, Rodriguez partners with Tabacalera NOA (New Order of the Ages), the facility owned by Noel Rojas and Brandon Hayes.

Without further ado, let’s break down the Ohana Pulse Toro and see what this cigar brings to the table.

The Ohana Pulse Toro consists of an Ecuadorian Habano wrapper over tobaccos from Condega, Jalapa, and Ometepe.

The Habano blend of the Ohana Pulse is available in two sizes. Each is packaged in 25 count boxes. The first production was limited to 5,000 cigars, but the plans are to make this an on-going small batch production blend. 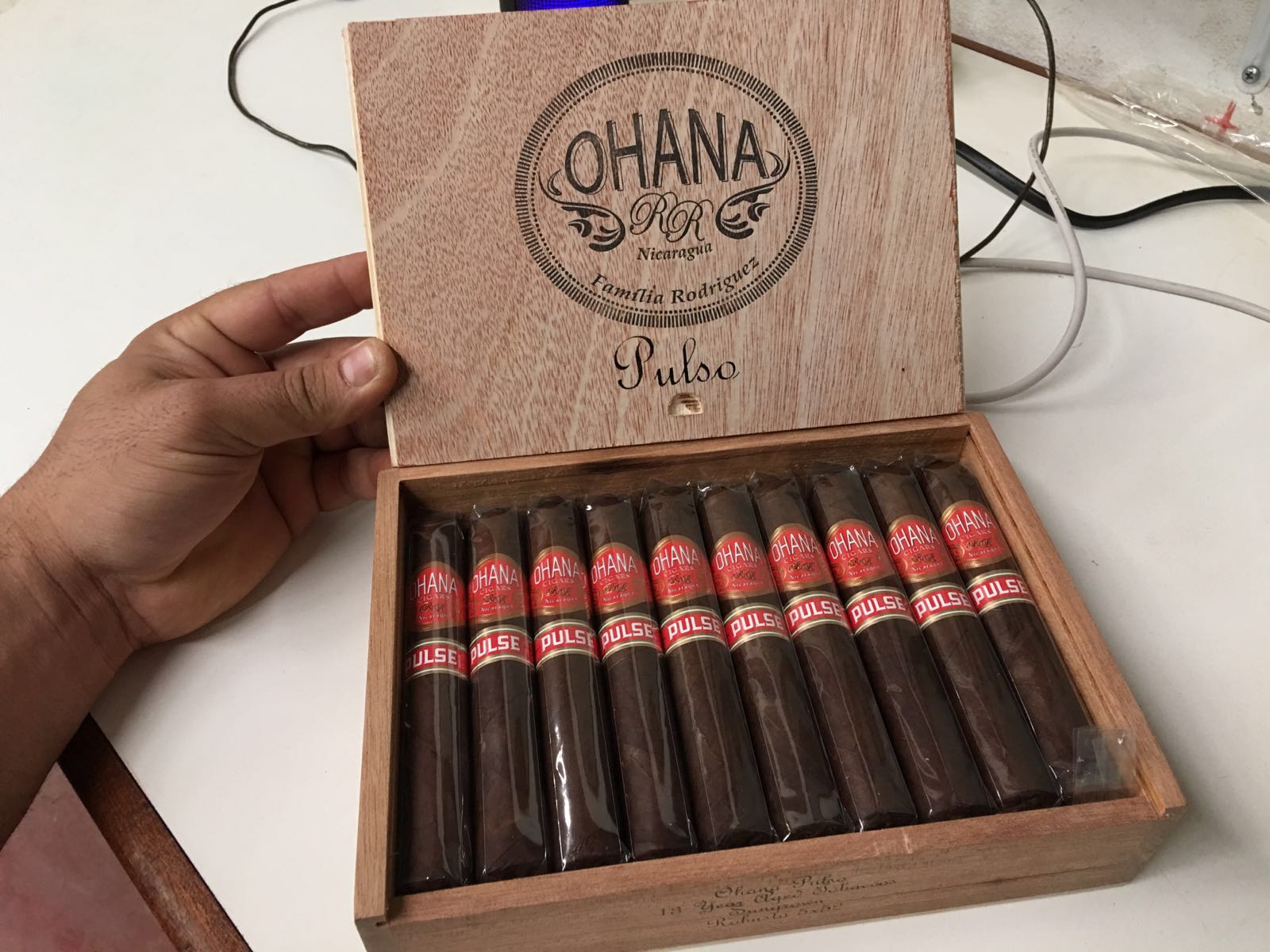 The Ecuadorian Habano wrapper of the Ohana Pulse Toro had a medium brown color with a slight colorado red mixed in. Upon closer examination, there was some subtle darker marbling on the surface of the wrapper. There was also a slight coating of oil on the wrapper as well. This wrapper was smooth as there were some thin visible veins and most of the wrapper seams well hidden. The Ohana Pulse Toro also had a covered footer and spiral cinnamon bun cap.

There is a secondary band that has a red background with gold and white trim. Prominently displayed on that band is the text “PULSE” in white font. The left and right side of the band have small black “pulse” designs.

As I typically do with pig-tail caps, instead of pulling off the tail of the Ohana Pulse Toro, I opted to place a straight cut to remove both the cap and tail simultaneously. After removing the cap, I moved on to the pre-light draw. The cold draw delivered notes of sweet natural tobacco, classic wood, as well as subtle notes of black pepper and graham cracker. Overall, I considered this pre-light draw to be excellent. At this point I was ready to light up the Ohana Pulse Toro and await what the smoking phase would have in store.

The Ohana Pulse Toro started out with notes of earth in the forefront. There also were notes of fruit sweetness and black pepper in the background giving the cigar some nice balance out of the gate.

As the Ohana Pulse Toro moved through the first third, some bready and woody notes joined the earth in the forefront. Meanwhile some coffee notes surfaced in the background with the fruit and black pepper. The black pepper lingered slightly on the tongue. During the first third, there was also and occasional spike of the pepper spice in the forefront.

During the second third, I still found earth, bread, and generic wood notes in the forefront. While the coffee and fruit notes were in the background, I did find both to have a slight increase in intensity. There also was still some black pepper in the background.

The earth, bread, and wood notes still remained in the forefront during the last third of the Ohana Pulse Toro. The fruit and coffee notes receded again, while the pepper slightly kicked up. This is the way Ohana Pulse Toro came to a close. The resulting nub was firm to the touch and cool in temperature.

From a burn perspective, the Ohana Pulse Toro scored very nicely. It maintained a straight burn path and had a relatively straight burn line. On each of the samples, the ash started out firm, but did slightly loosen up along the way. This was an ash with a silver-gray color to it. Meanwhile the burn rate and burn temperature were ideal. 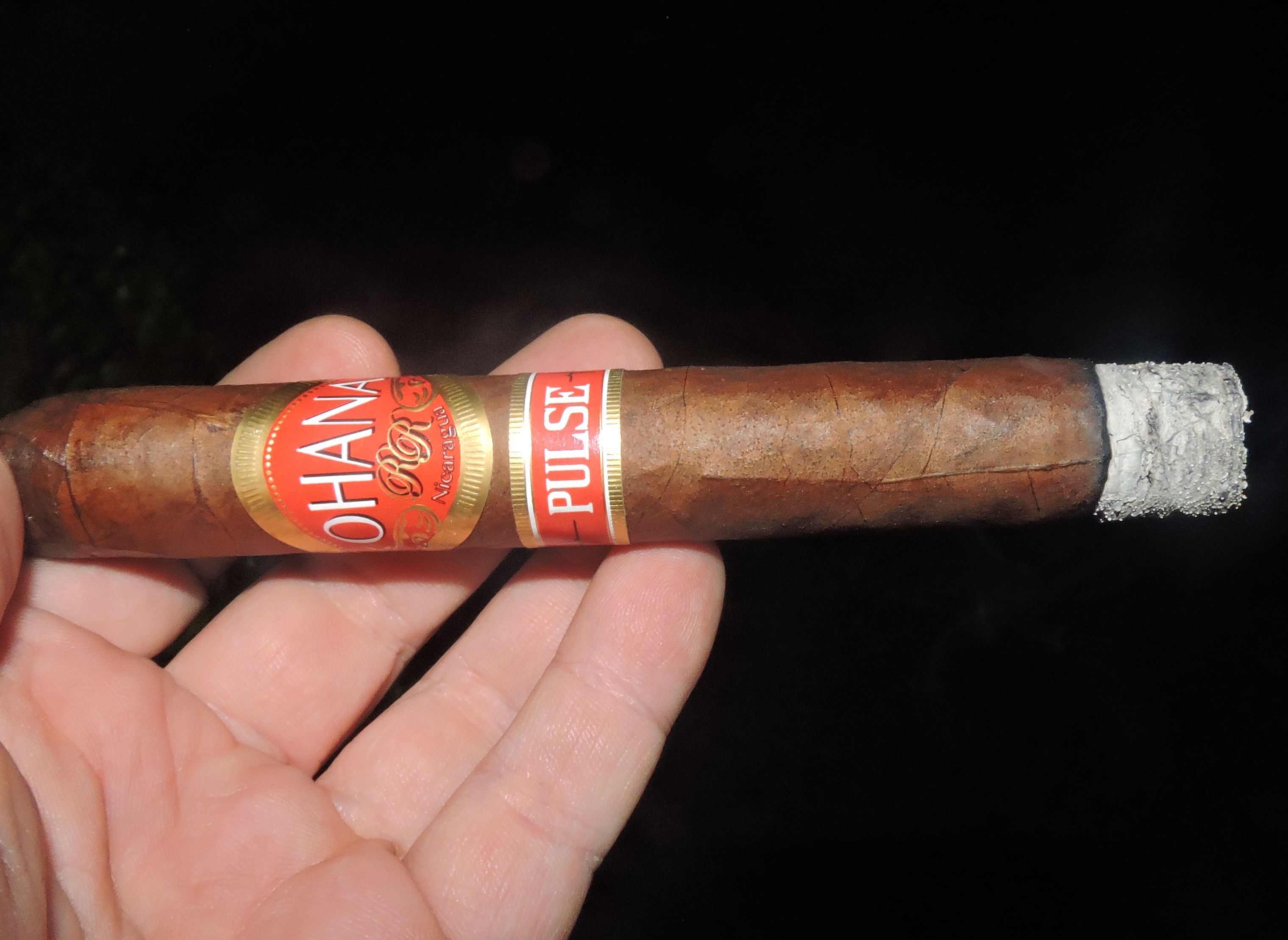 Burn of the Ohana Pulse Toro

The draw also performed equally well as the burn. The Ohana Pulse Toro’s draw had a touch of resistance to it – which is something that I like. This made the Pulse Toro an enjoy cigar from start to finish.

I found the Ohana Pulse to fall into the medium range for strength and body from start to finish. The strength pretty much remained a constant. The body did gradually increase during the smoking experience.

During the first third, I still found the strength had a slight edge over the body, but by the second third, both attributes were on equal footing with neither overshadowing the other.

Quietly Tabacalera NOA and in particular Noel Rojas are creating some very good products. The Ohana Pulse Toro is one such example. Its not a cigar that will overpower you will strength and body, but its one that delivers a nice amount of flavor change-ups and the flavors delivered are well-balanced. This was a cigar that kept me interested from start to finish. The Ohana Pulse Toro is also the type of cigar that can be enjoyed any time of the day – and it’s one I can see either a novice or experienced cigar enthusiast enjoying. As for myself, this is a cigar I would easily reach for and smoke again – and its one worthy of a box split.