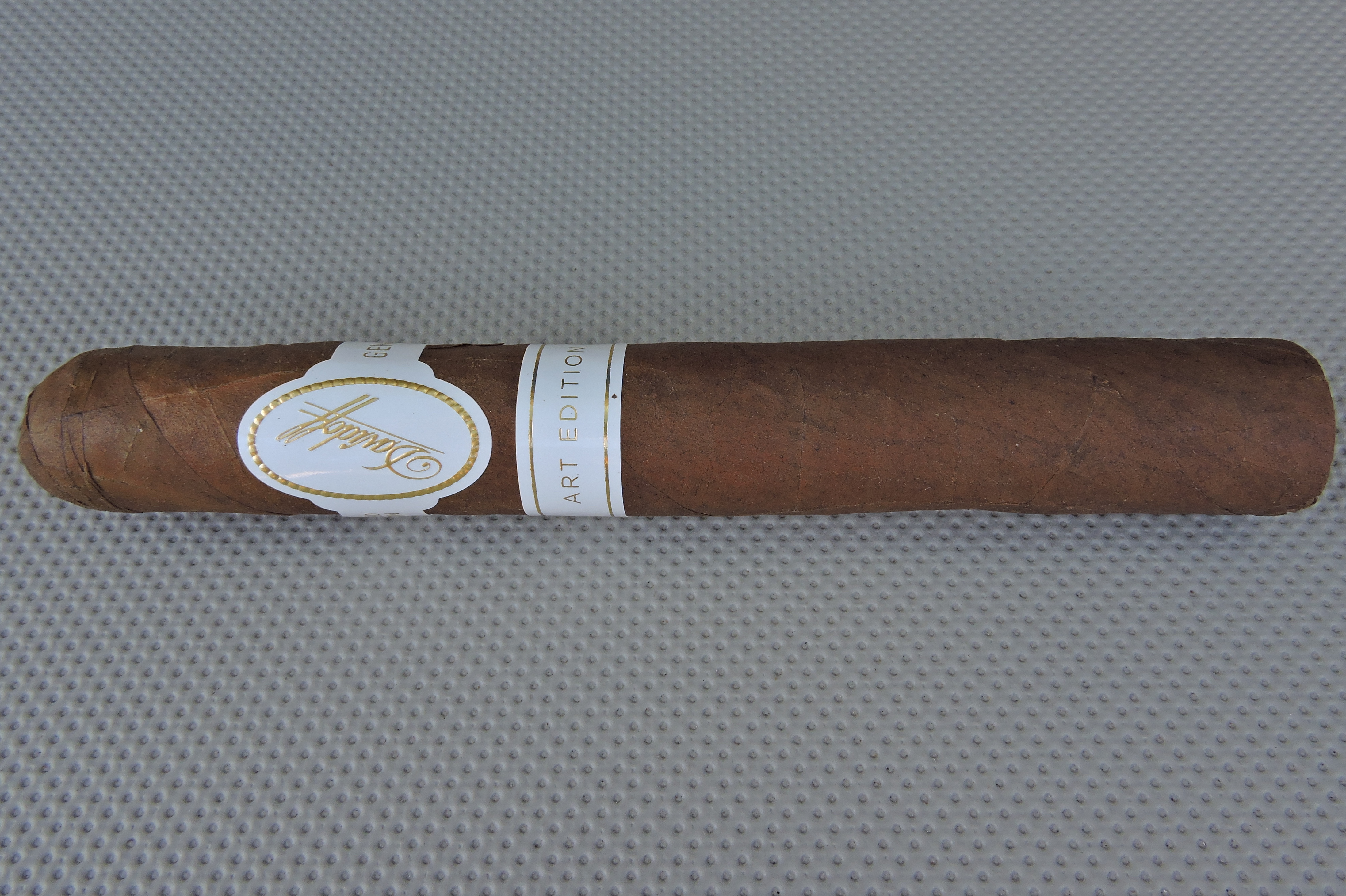 Warner’s artwork is used on one of five different cigar boxes as a part of the Davidoff Art Edition 2017 release. This one was inspired by a series of photographs of the Carribbean Islands. He then built a collage of patterns and turned it into a digital three-dimensional object. He then saved images of the digital 3D object viewed from various angles and used these images like puzzle pieces to build the final artwork.

Like the previous Art Edition installments, the Davidoff Art Edition 2017 is a limited series. There is a total of 5,000 ten-count boxes produced. There are 1,000 boxes for each of the five designs of the Art Edition 2017. Each of the boxes is individually numbered. The box number below is 394. 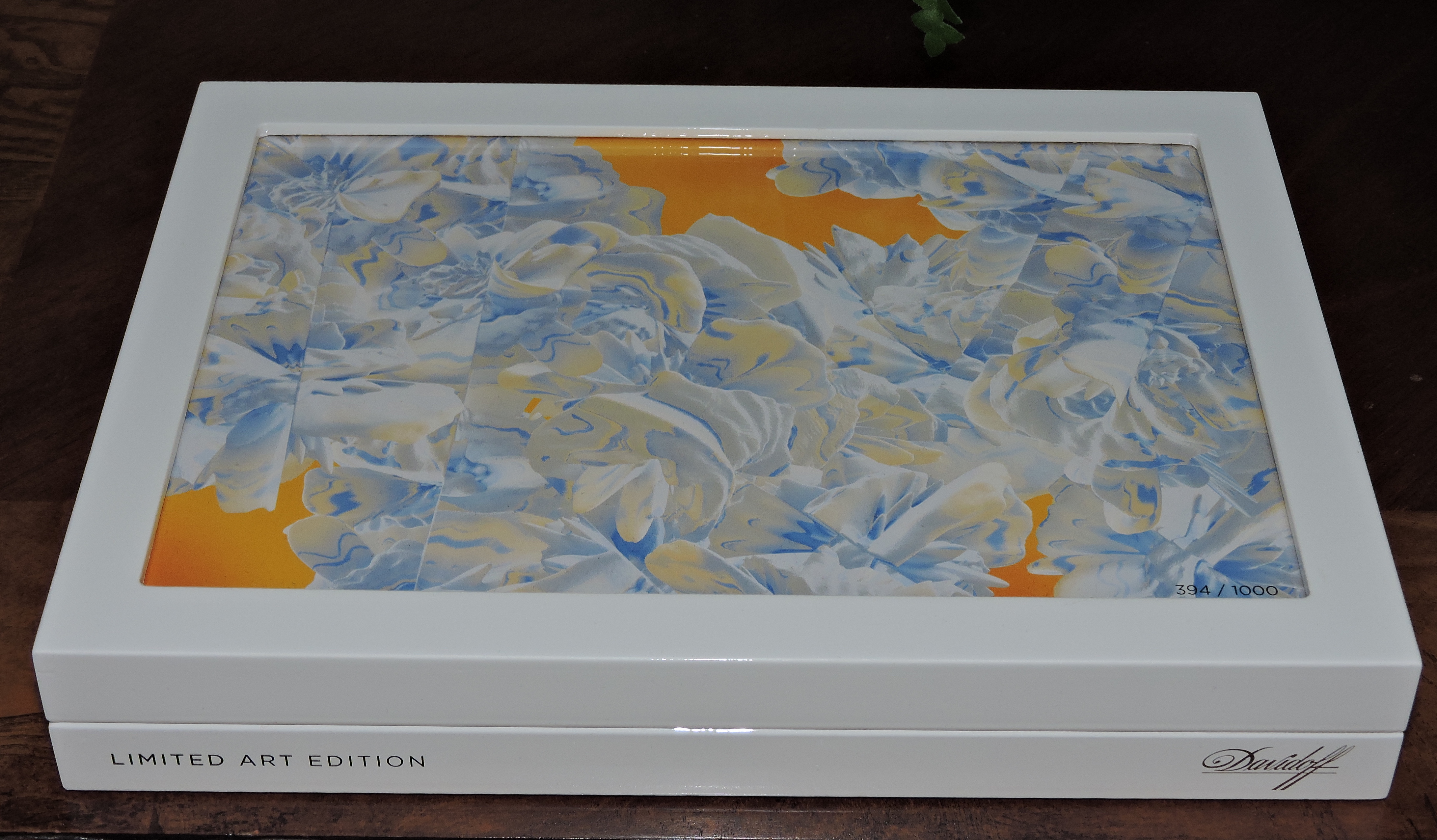 Without further ado, let’s take a closer look at the Davidoff Art Edition 2017 and see what this cigar brings to the table.

The Davidoff Art Edition 2017 introduces an all-new blend into the series. This blend includes an Ecuadorian Habano wrapper over an Ecuadorian Sumatra binder and fillers from Brazil and the Dominican Republic.

The cigars are packaged in ten-count boxes. The top of the box affixes to the base via magnets. 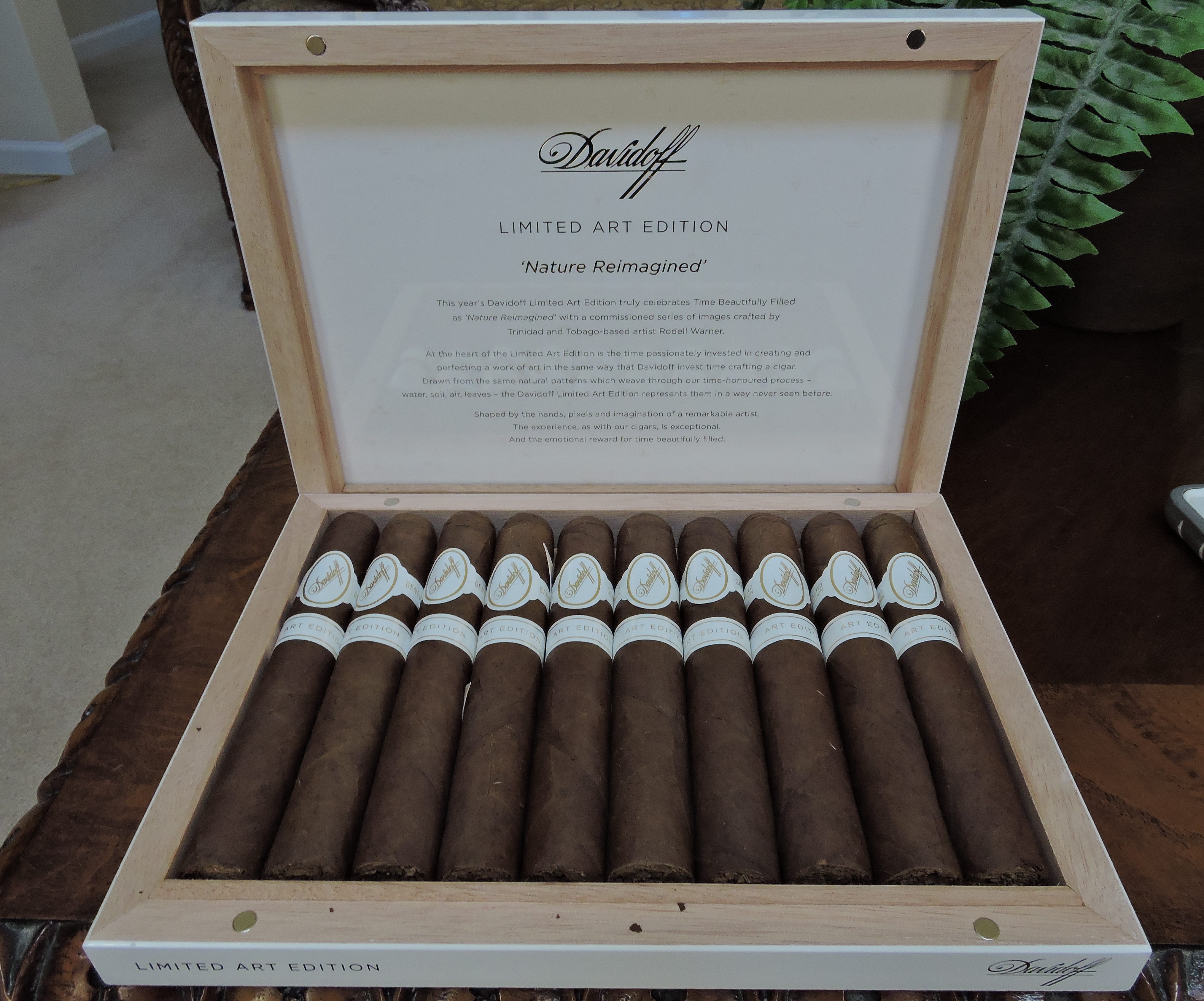 The Habano Ecuador wrapper has a medium to dark brown color to it. Depending on how the light shines on it, it might give off a slight colorado red tint. There is a light sheen of oil on the surface of the wrapper. There are some visible veins while the dark color of the wrapper does a good job at hiding the wrapper seams. 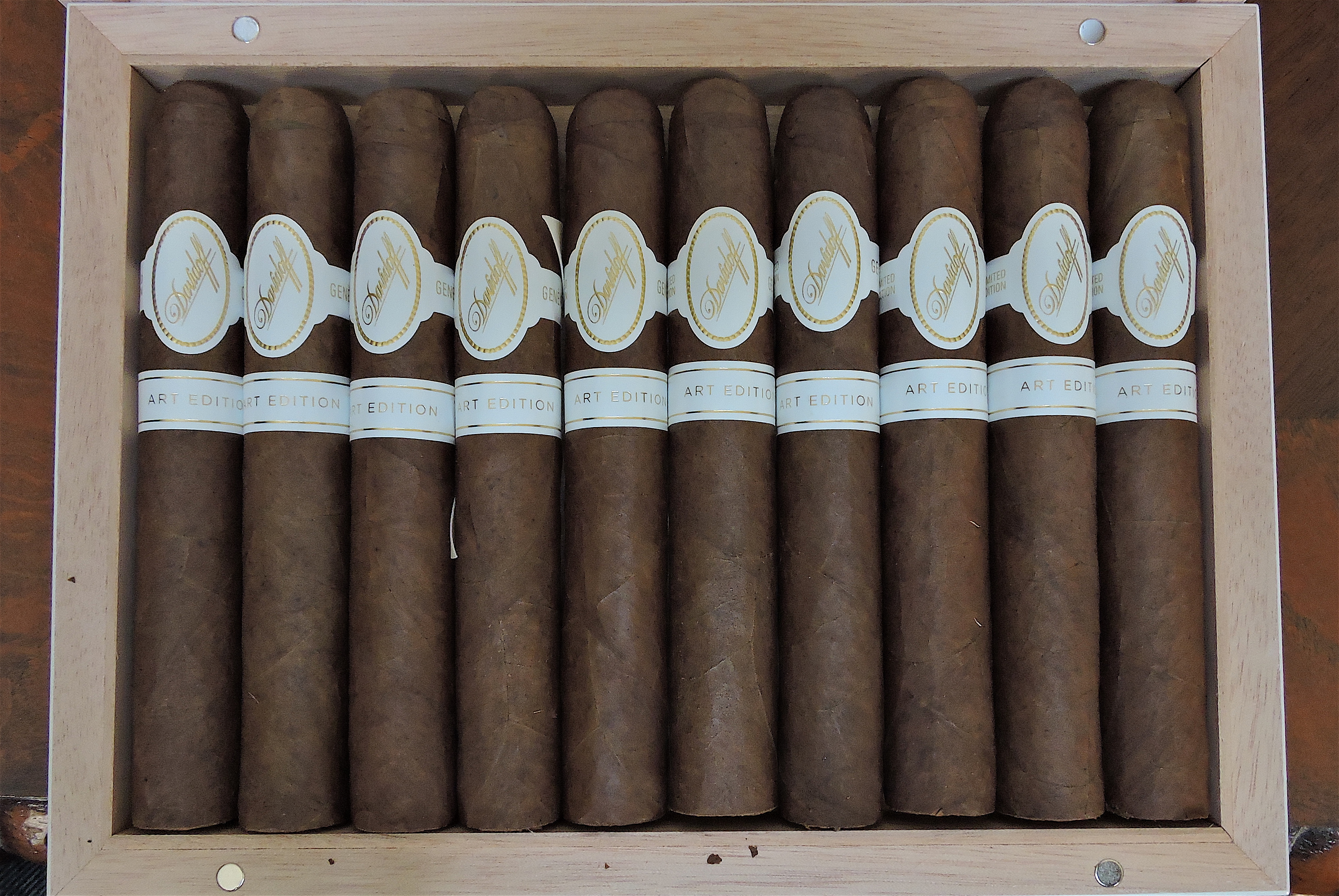 There are two bands on the Davidoff Art Edition 2017 cigar. The first band is similar to the classic Davidoff White label. It features the name “Davidoff” in classic cursive gold-colored font on an oval field of white. There are small gold circles going around the perimeter of the oval. The word “GENEVE” (in gold font) flanks to the right of the oval field. To the left of the oval, is the text “LIMITED EDITION” in gold font.

The secondary band differs from the Davidoff Art Edition 2014 and 2016 editions in that it does not feature art work on the band. Instead, it is a plain white band featuring the text “ART EDITION” in gold font with a gold pinstripe near the top and bottom.

There was a slight spurt of baker’s spice that kicked off the cigar experience of the Davidoff Art Edition 2017. This was followed up by additional notes of natural tobacco, earth, and hay. The natural tobacco, along with the baker’s spice remained the primary notes while the earth and hay became secondary notes. Later in the first third, a slight amount of black pepper also surfaced in the background. The retro-hale produced an additional layer of the bakers’ spice.

During the second third, I found the earth notes made their way into the forefront. The natural tobacco and hay remained in the background. During this stage, the baker’s spice transitioned to more of a floral spice. There was an increase in the black pepper on my tongue, and the black pepper took over the retro-hale. Overall there was an increase in spice and a decrease in sweetness.

The last third saw the earth and black pepper as the primary note. There were still some natural tobacco and hay notes present as well as subtle floral spice. This is the way the Davidoff Art Edition 2017 came to a close. The resulting nub was firm to the touch and cool in temperature.

The burn of the Davidoff Art Edition 2017 had no trouble maintaining a straight burn path. There was a slight amount of jaggedness on the burn line, but this really didn’t warrant many touch-ups – as this cigar never was in danger of meandering. The resulting ash was tight and firm with a light gray color to it. The burn temperature was ideal. I did find this cigar smoked a little faster than I prefer (this cigar had an average about 80 minutes per smoke), however, I didn’t find any adverse effects other than a shorter smoking time. 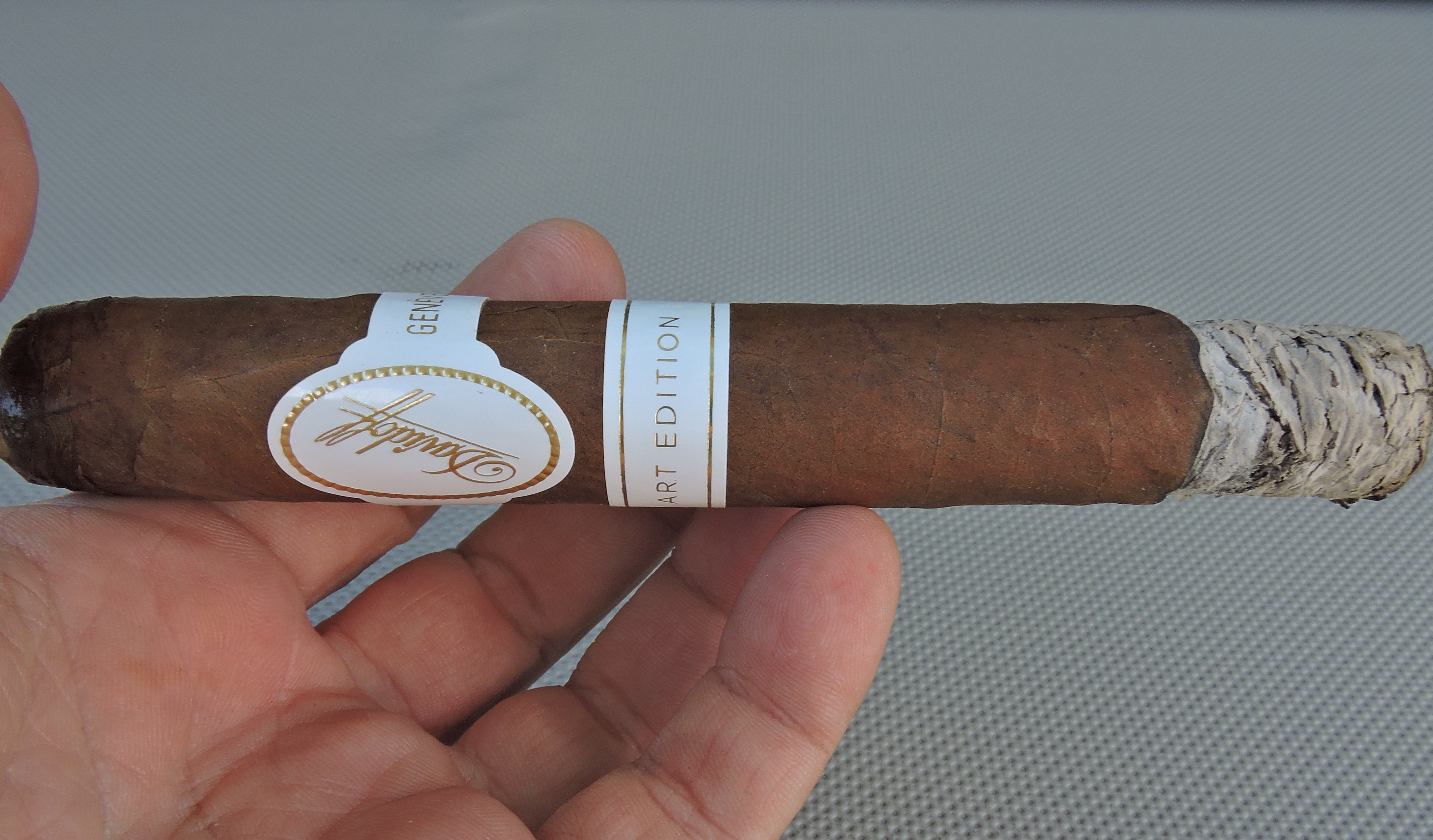 Burn of the Davidoff Art Edition 2017

The draw to the Davidoff Art Edition 2017 had a nice balance between openness and resistance. Overall, this was a low maintenance cigar to derive flavor from.

Both the strength and body balanced each other nicely with neither attribute overshadowing the other.

While I do miss the perfecto sizes of the previous two iterations of the Davidoff Art Edition, I like what the larger Toro format brought to the blend of the Davidoff Art Edition 2017.  The art work is pretty interesting, but ultimately it comes down to the cigar blends – and over the past few years, Davidoff has brought three excellent and distinct blends to market with Davidoff Art Edition series.  The only negative is that this cigar carries a $39.00 price point. While the cigar scores well on merit, it’s very difficult to tell someone to buy a box of cigars at that price point. Still, this is a fun cigar to smoke – and one that makes a great special occasion cigar. It’s a cigar I’d recommend to a novice or experienced cigar enthusiast. As for myself, this is a cigar I’d smoke again – and consider it worthy of a box split.