Today we take a look at another installment of De Los Reyes’ Saga Short Tales series, the Saga Short Tales Tomo IV – L.O.V. (Labor Omnia Vincit). As the name indicates, Saga Short Tales is a line that focuses on smaller, short-sized smokes. The series consists of ten unique blends, each in a different size with a different theme. With Short Tales, each cigar pays homage to a different theme related to tobacco and cigar making. Tomo IV stands for “Volume 4” and it is the fourth installment in the Short Tales series.  L.O.V. is an acronym for Labor Omnia Vincit which translates to “Hard Work Always Prevails”  or “Work Conquers All”- a theme often associated with cigar making.  Recently I’ve had an opportunity to smoke Saga Short Tales Tomo IV L.O.V. This 4 x 44 figurado might look small, but it is one that should not be underestimated as it is a true flavor bomb.

The first two volumes used titles “Tales of” while the next three volumes took a Latin theme for their titles. With Tomo III-V, there was a common denominator of Piloto Cubano tobacco in each blend.  Each volume incorporates packaging which is designed in the form of a classic novel – complete with a “story” of the cigar included. 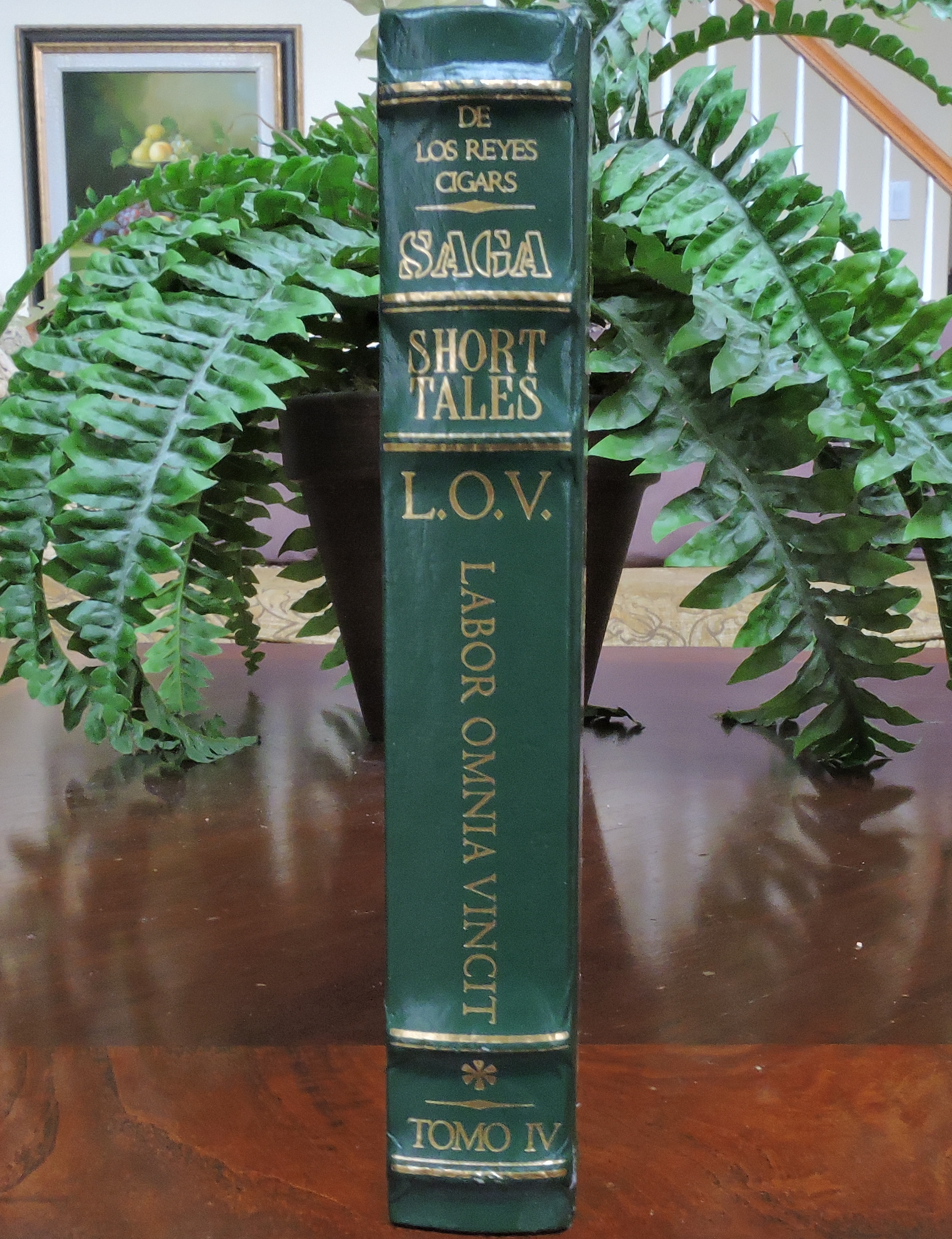 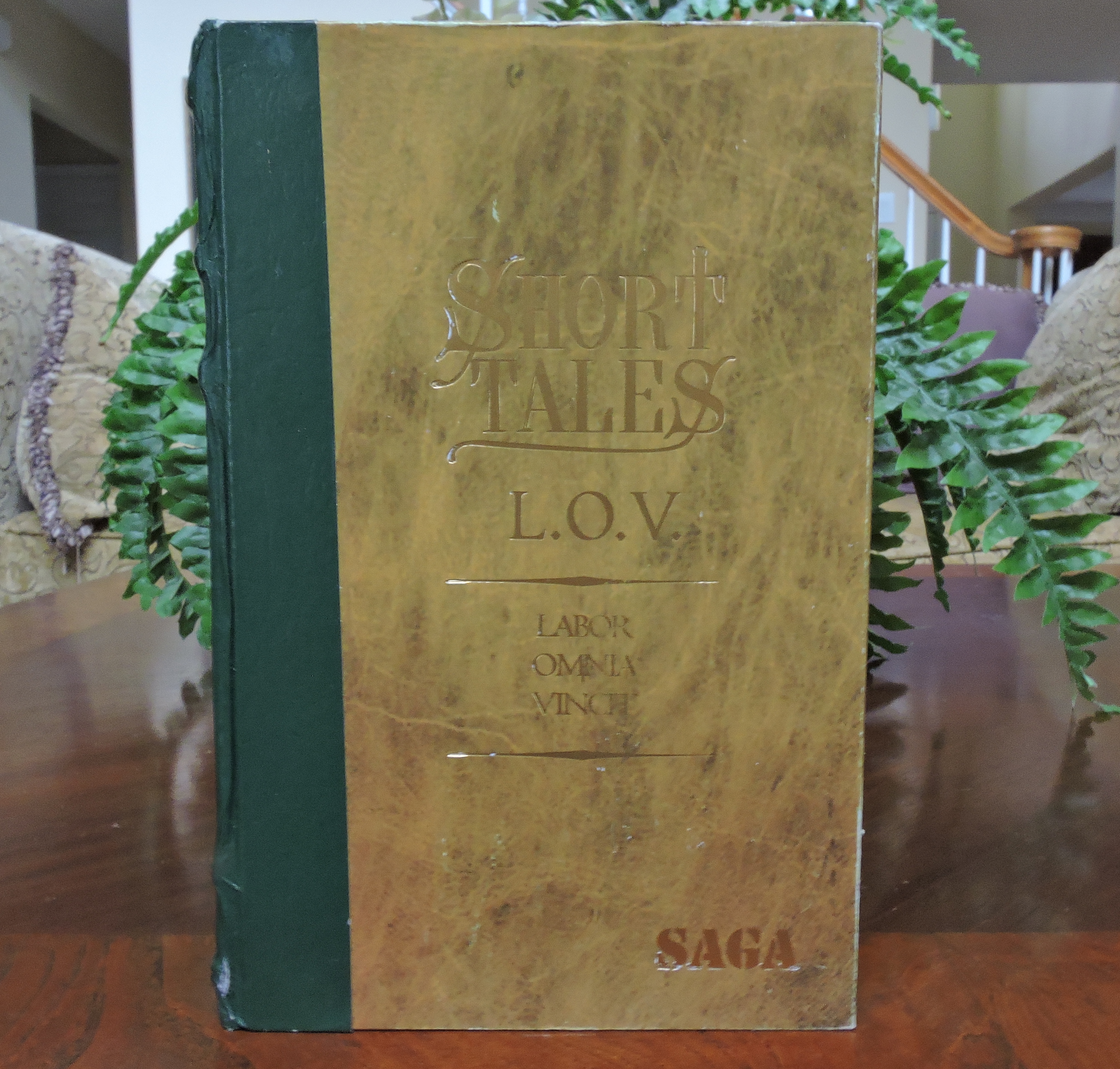 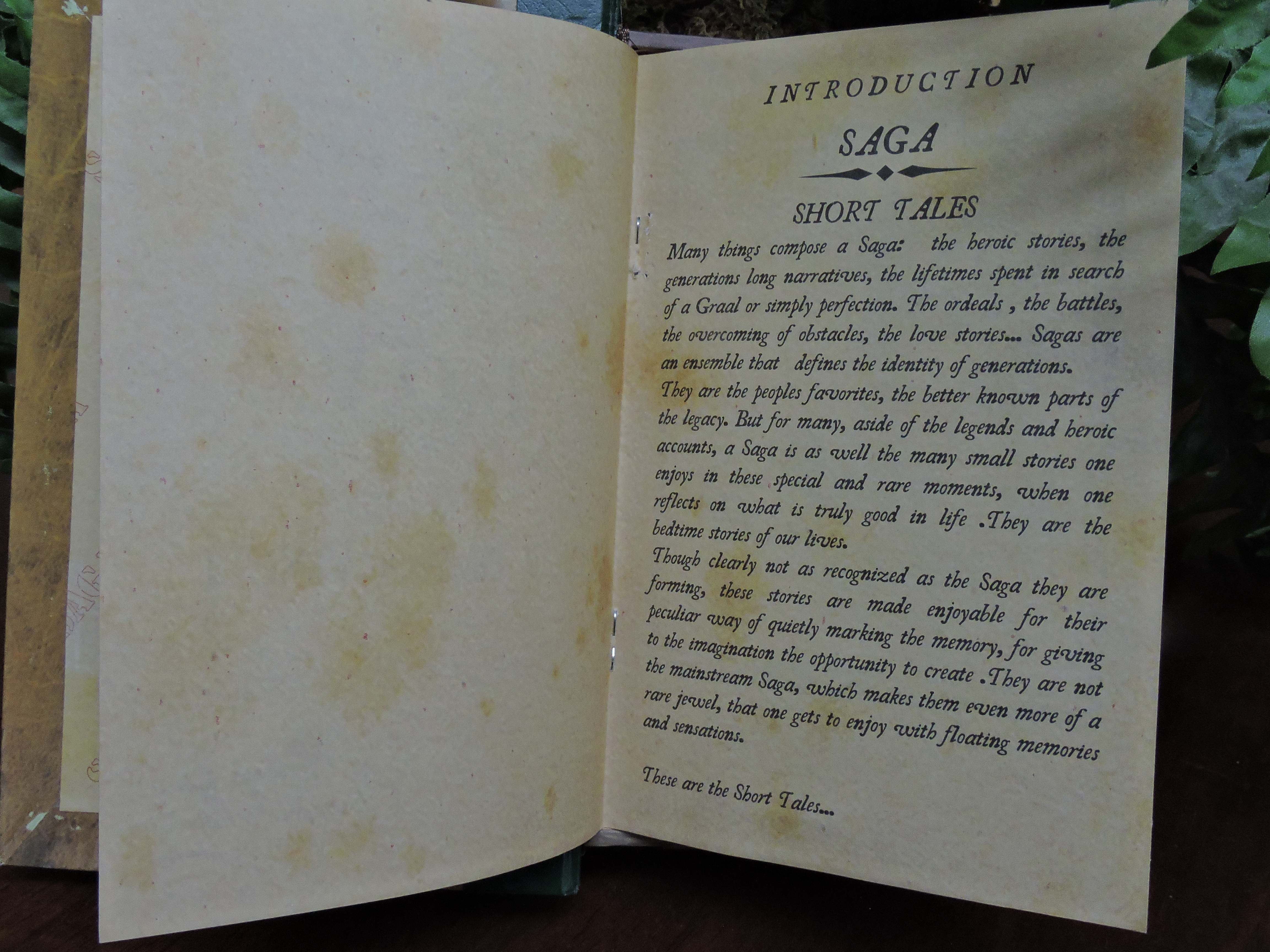 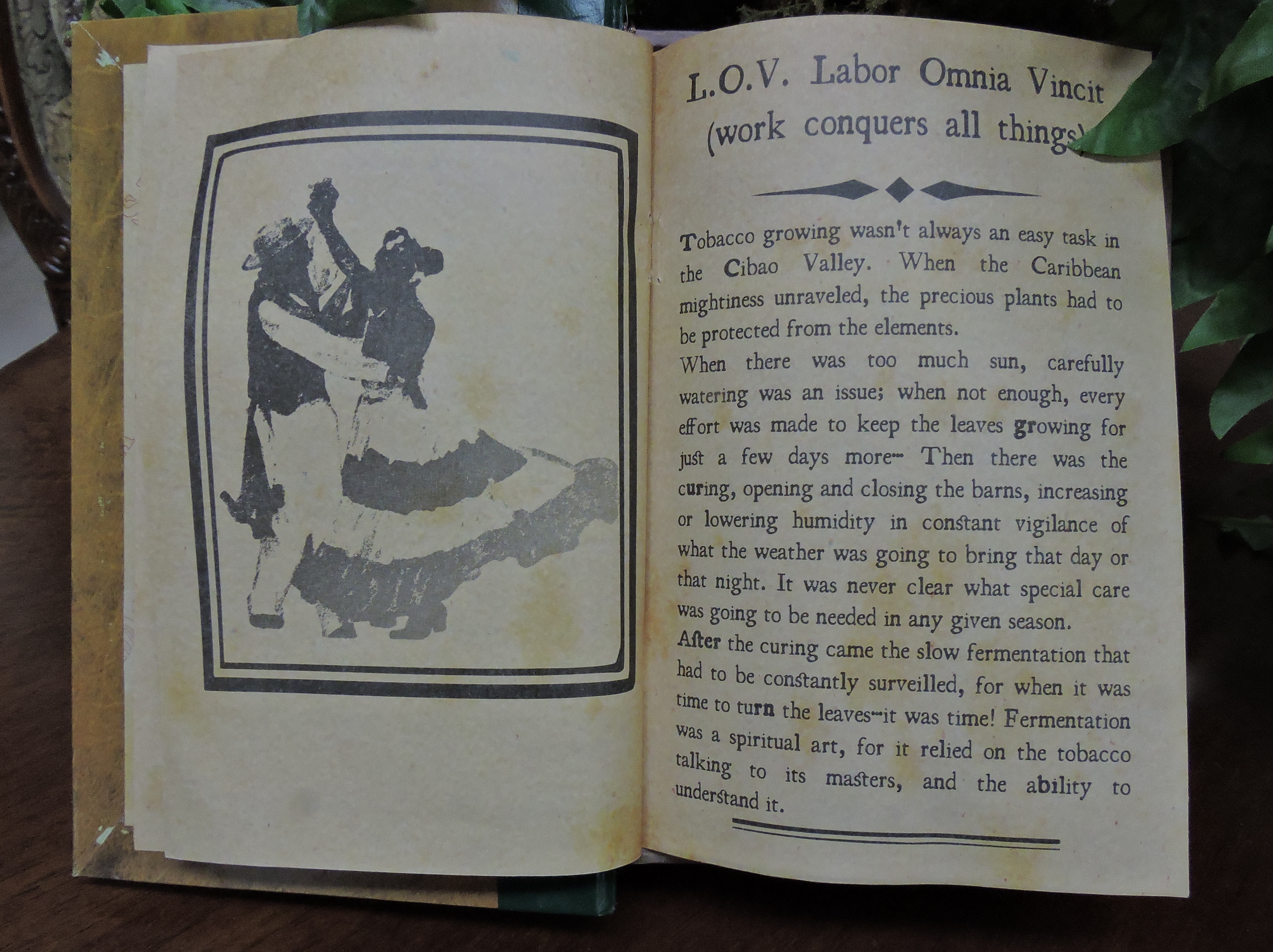 Without further ado, let’s break down the Saga Short Tales Tomo IV – L.O.V cigar and see what this cigar brings to the table.

L.O.V. uses a wrapper that De Los Reyes calls “Indonesian Ecuador”.  It also incorporates a binder from the San Vincente region in the Dominican Republic. In addition to Piloto Cubano viso in the filler, L.O.V. also features Pennsylvania grown viso. As with all De Los Reyes Cigars, L.I.V. is produced at the company’s factory in the Dominican Republic. 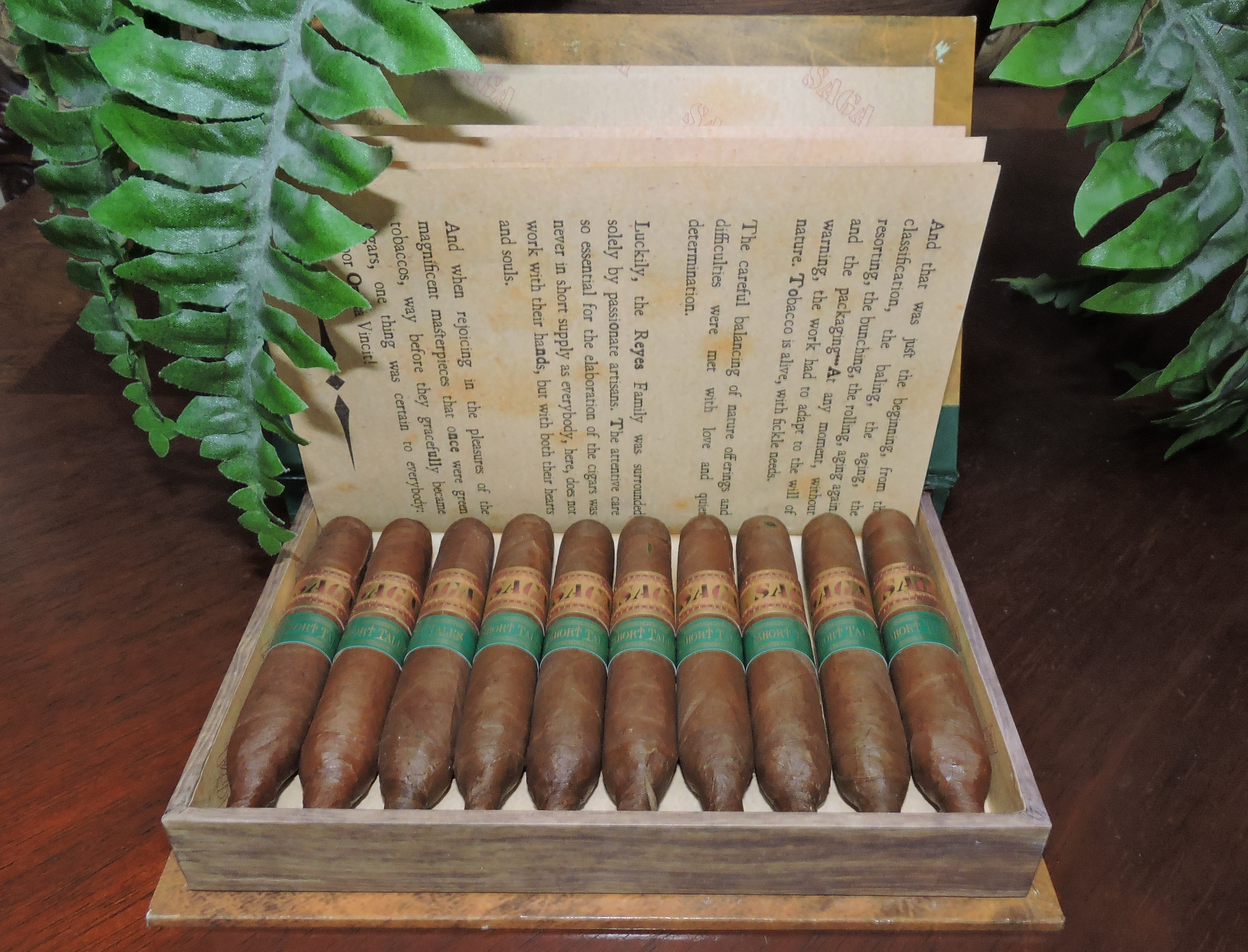 The figurado vitola of L.O.V. features a nozzle on the footer that is reminiscent of one found on many salomon-shaped cigars. The cigar is finished with a rounded cap. The Indonesian Ecuador wrapper has a cinnamon-like color to it. The wrapper itself also had some oil on it. While there were some visible veins, this was a smooth wrapper and there weren’t many visible wrapper seams. 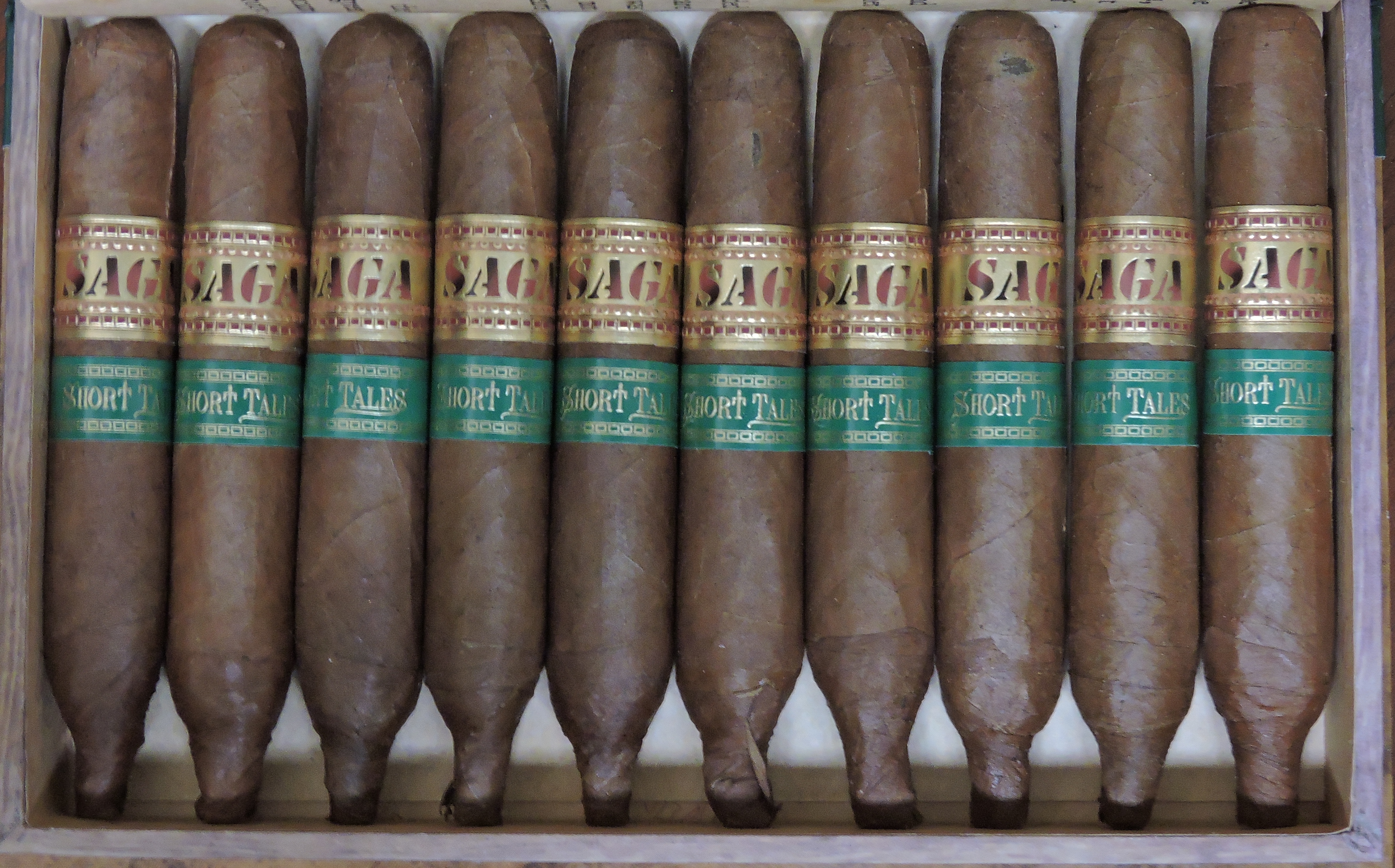 There are two bands on the Saga Short Tales L.O.V. These are the same bands found on the other Saga Short Tales releases. The primary band is gold in color. Prominently displayed on the middle of the band is the text “SAGA” in a modern red-colored font. Above and below the text is a row of a gold rivet-like design. There is also a row of red rivets toward the top and bottom of the band.

I commenced my cigar experience with the Saga Short Tales L.O.V. by placing a straight cut into the cap. Once the cap was removed, I moved on to the pre-light draw. The dry draw delivered a mix of wood, natural tobacco, and baker’s spice. Overall, I considered this to be a satisfactory pre-light draw experience.

As I lit up the L.O.V., I opted to toast about 1/8″ of the nozzle tip in order to get a clean burn. It was now on to the smoking experience.

While the L.O.V. burned through the nozzle portion of the cigar, there were some prominent notes of red pepper. At the same time, I also picked up some cedar and natural tobacco. Once the L.O.V. reached the base of the cigar, the natural tobacco notes moved into the forefront. This natural tobacco now had a slight fruit-like sweetness to it. In the background, there were notes of red pepper, cedar, and generic wood. I also picked up a mix of red and black pepper on the retro-hale.

The final third of the L.O.V. didn’t see much change – namely natural tobacco and cedar as primary notes and red pepper, wood, and earth as secondary notes.  I did see a slight increase in the pepper on the tongue, but it never overpowered the blend. This is the way the cigar experience of the L.O.V. came to a close. The resulting nub was firm to the touch and cool in temperature.

The L.O.V. was pretty much a low maintenance burn from start to finish. The cigar maintained a straight burn path. While there was a little bit of curvature to the burn line, the cigar was never in danger of meandering. The transition of the burn from the nozzle tip to the base of the cigar worked quite well. As for the ash, while it was darker in the picture below, this is an ash that I found to be grayish in color. The ash was not too firm, but far from a loose and flakey ash. Meanwhile, the burn rate and burn temperature were both ideal. 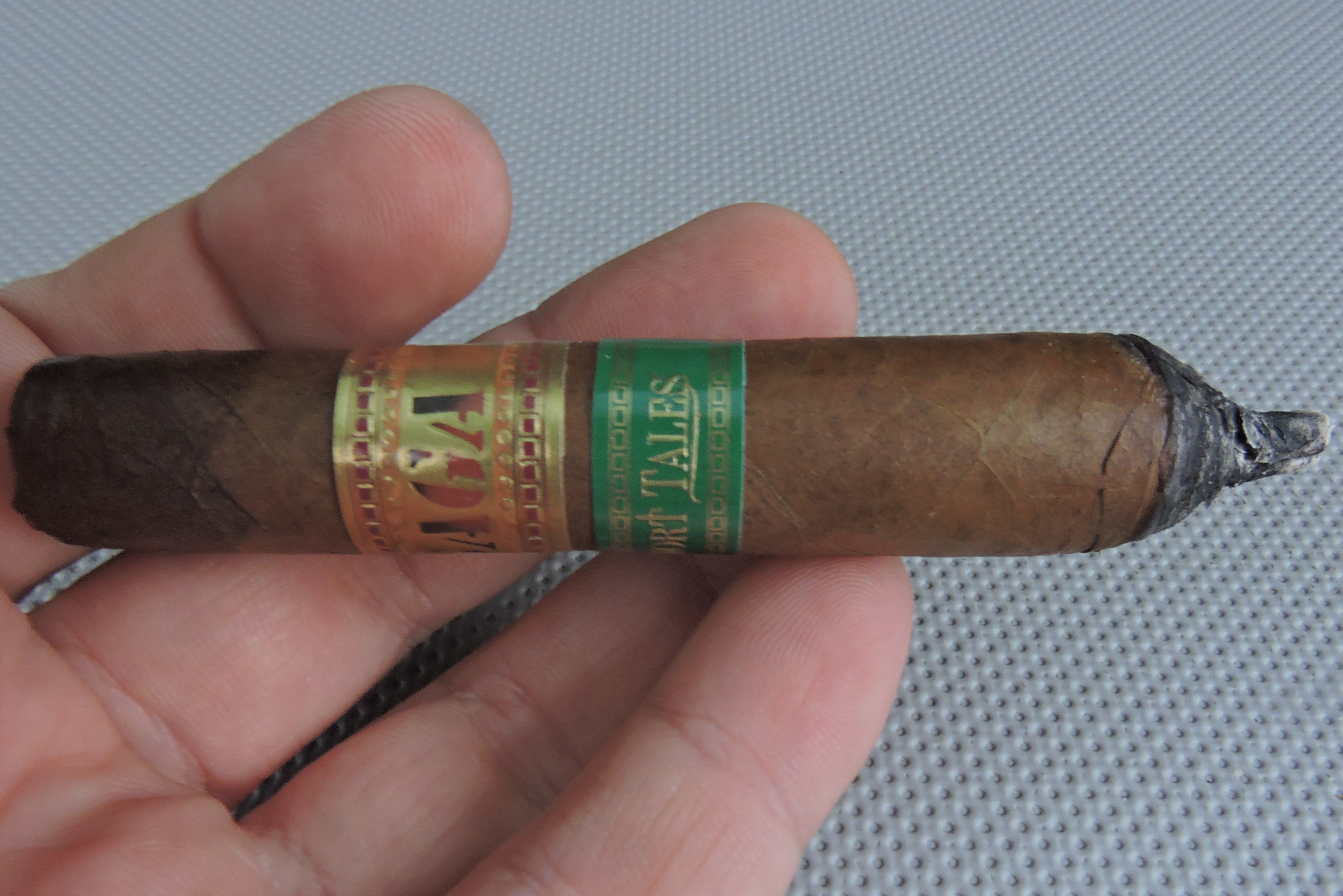 The draw had a touch of resistance to it.  I found this draw worked very nice on a slow cigar as it prevents you from smoking this quick. This little cigar also produced a nice abundant layer of smoke.

As I mentioned, this might be a small cigar, but it’s one that should not be underestimated – especially when it comes to strength and body. Given the amount of visos in the filler, I was surprised at what this cigar delivered. This was a cigar that was medium to full in strength and full in body from start to finish. Along the way, I found the intensity levels of both the strength and body did increase slightly (but the strength never crossed into full territory).

In terms of strength versus body, I found the body had a significant edge from start to finish.

I would be the first to admit, a 4 x 44 figurado simply would not be a cigar I would reach for on a regular basis. However, the Saga Short Tales Tomo IV: L.O.V. has made me rethink that. As discussed this little cigar is quite bold, but it’s also a flavor bomb – meaning the flavors simply pour out of this cigar from start to finish. I think the fact that this cigar is full-bodied from start to finish works quite well with the flavor profile produced. In an ironic twist, the one negative of this cigar is that it is too small – yet that might be the very reason why this blend works so well.

The L.O.V. is probably a cigar I would steer toward an experienced cigar enthusiast. It is also a good cigar for a novice looking for a fuller, bolder cigar. As for myself, this is a cigar I would smoke again – and it definitely warrants box purchase consideration.