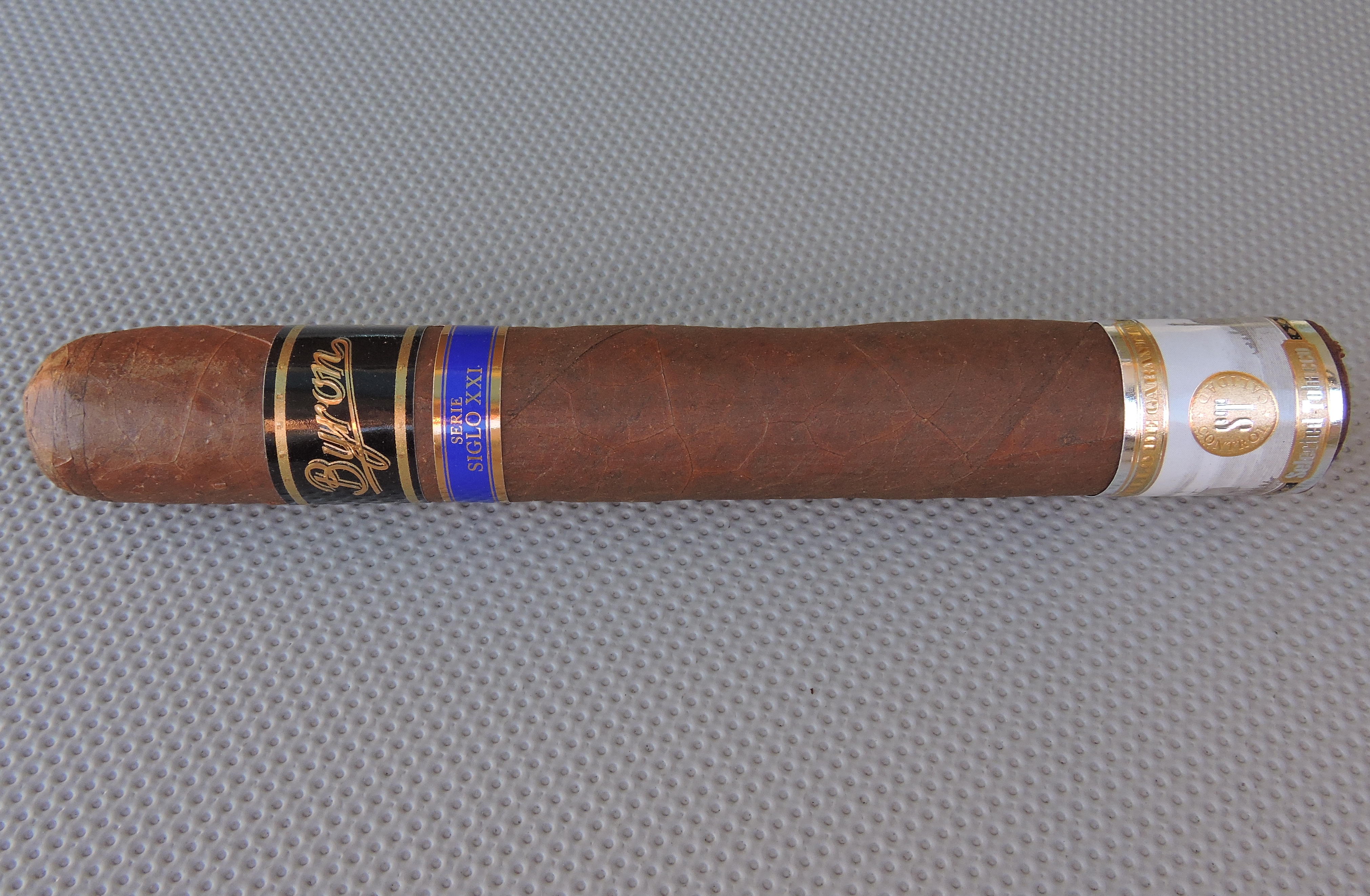 The Byron brand traces its origins to Cuba in 1850 when the “Lord Byron” was created by Jose and Eusebio Alfonso – one of which was Alfonso’s great-great-great-grandfather. The original cigar was made in a small factory in Santiago de las Vegas in the Havana province of Cuba. The name Byron honors George Gordon Byron – who was better known as “Lord Byron” – a renowned English poet. The brand lasted for over 80 years before it folded during the Great Depression of the 1930s. The brand would be dormant until 1998 when Nelson Alfonso would recover the Byron brand name.

Siglo stands for “century” and the blend names (Siglo XIX, Siglo XX, and Siglo XXI) pay homage to the three centuries for which the Byron brand has been active. The Byron Serie Siglo XXI Elegantes has a suggested retail price of $33.00. One contributing factor to why Byron is priced as an ultra-premium brand is because of the packaging. This includes humidified packaging options such as jars, tubes, and humidor boxes. The Elegantes is packaged in 25-count boxes that also serve as humidors. 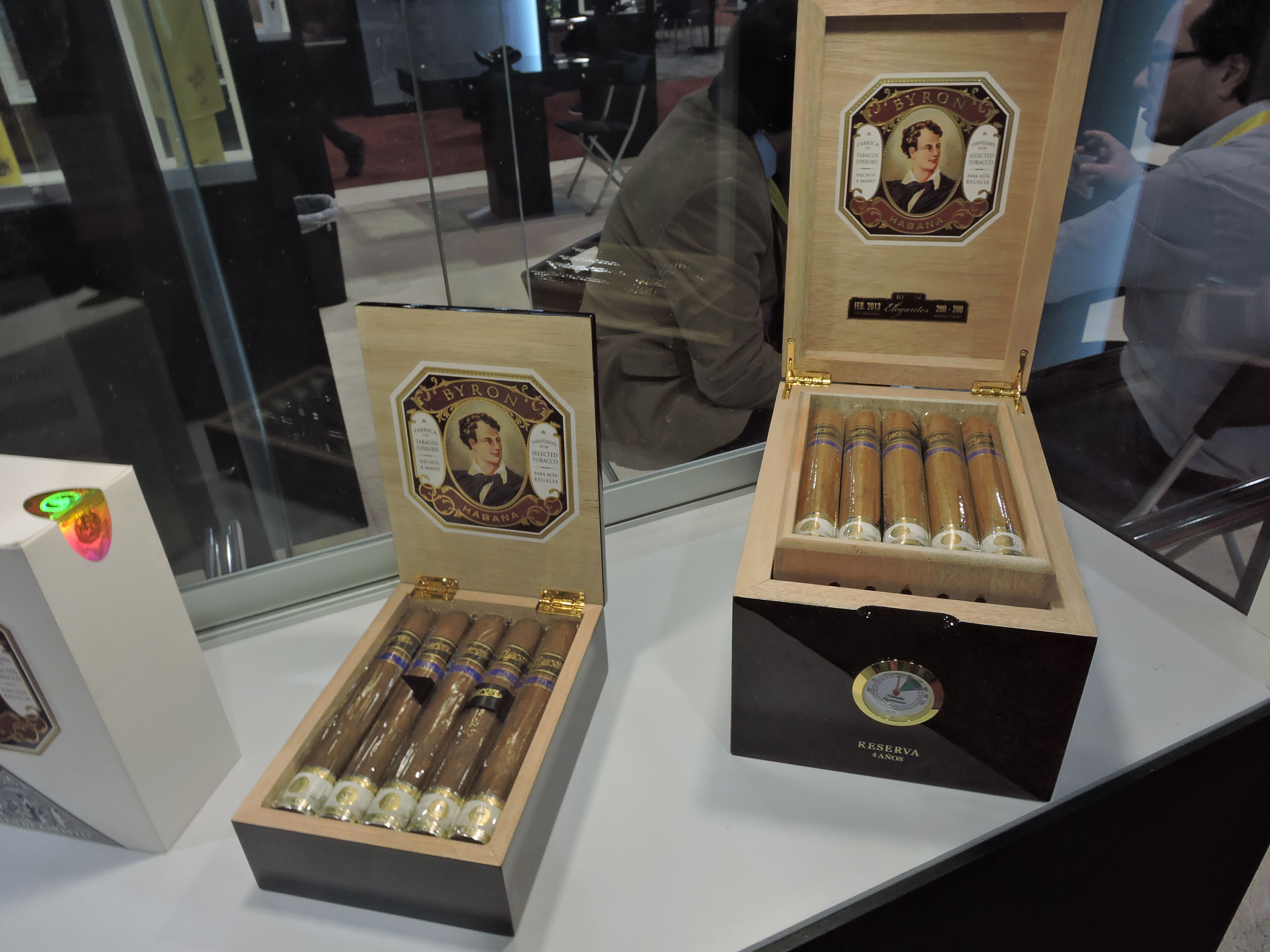 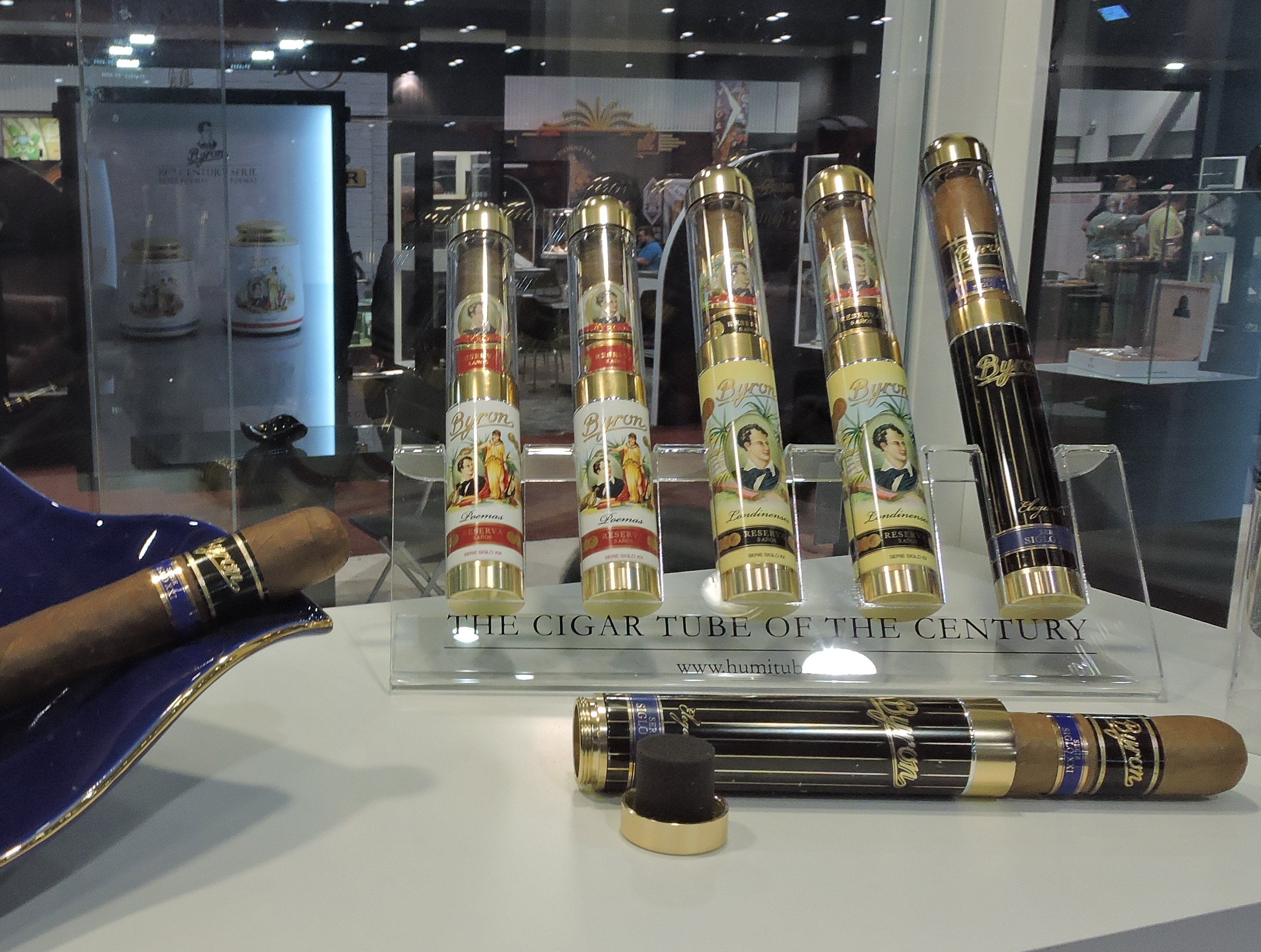 Without further ado, let’s break down the Byron Serie Siglo XXI Elegantes and see what this cigar brings to the table.

As with all of the Selected Tobacco blends, the Byron Siglo XXI is rolled in Costa Rica at Tabacos de Costa Rica. According to United Cigar Group, the tobaccos used in the filler have been aged four years while the cigars themselves are aged for five years. This is another contributor to the pricing of this cigar.

There are currently two vitolas in the Byron Siglo XXI.

There are also two other sizes listed on the Byron Cigars’ website: Honorables (7 x 60) and Aristócratas (8 x 52), but currently United Cigar is actively distributing the Distinguidos and Elegantes’ size.

The Ecuadorian wrapper has a medium to dark brown color with a Colorado tint. There was a slight oily sheen on the surface of the wrapper. This was also a wrapper with a smooth surface. Any veins that were visible were on the thin side and there were also no wrapper seams.

There are two bands on the Byron Serie Siglo XXI Elegantes. The primary band has two sections. There is a thin opening between the two sections that gives the appearance that the cigar actually has two bands. The upper portion of the band is black with gold stripes across the top and bottom. The band has the text “Byron” in gold retro-styled baseball cursive font. The lower portion of the band is indigo with gold trim. On that band is the text “SERIE SIGLO XXI” in gold font.

There was one thing I noticed about the Byron Serie Siglo XXI Elegantes and that was the aroma. Ordinarily, I love the aroma of an unlit cigar fresh from the humidor, but this cigar’s aroma was out of this world. There was a natural tobacco sweetness that came off the wrapper of this cigar like none I’ve ever encountered before.

The natural tobacco flavors I noticed from the aroma and pre-light were quite apparent on the initial draws of the Byron Serie Siglo XXI Elegantes. The natural tobacco flavor had some qualities of nougat and fruit, but also maintained a tobacco taste. Meanwhile, in the background, there were notes of cedar and bread. There also was a gentle cedar sweet-spice note on the retro-hale.

The second third of the Byron Serie Siglo XXI Elegantes saw the baker’s spice eventually make its way to the forefront joining the natural tobacco notes. During this stage, the nougat and fruit sweetness diminished into the background. There were a few bitter qualities to the natural tobacco notes, but I actually found this balanced off some of the sweetness that was present.  The bread and cedar notes remained in the background and there was now some black pepper that surfaced.

The last third saw the flavor profile remain very similar to how it closed out the second third. The natural tobacco and baker’s spice remained prominent. The black pepper was a close secondary note. I still detected some cedar and bread notes. The nougat and fruit sweetness early on was reduced to some occasional hints surfacing. This is the way Byron Serie Siglo XXI Elegantes came to a close. The resulting nub was firm to the touch and cool in temperature.

From a burn perspective, the Byron Serie Siglo XXI Elegantes performed quite well. This is a cigar that maintained a relatively straight burn path from start to finish. While there was an occasional amount of curvature on the burn line, this didn’t warrant the need for more touch-ups. The resulting ash had a salt and pepper color to it. This ash wasn’t overly firm, but was far from loose or flaky. The burn rate and burn temperature were ideal. 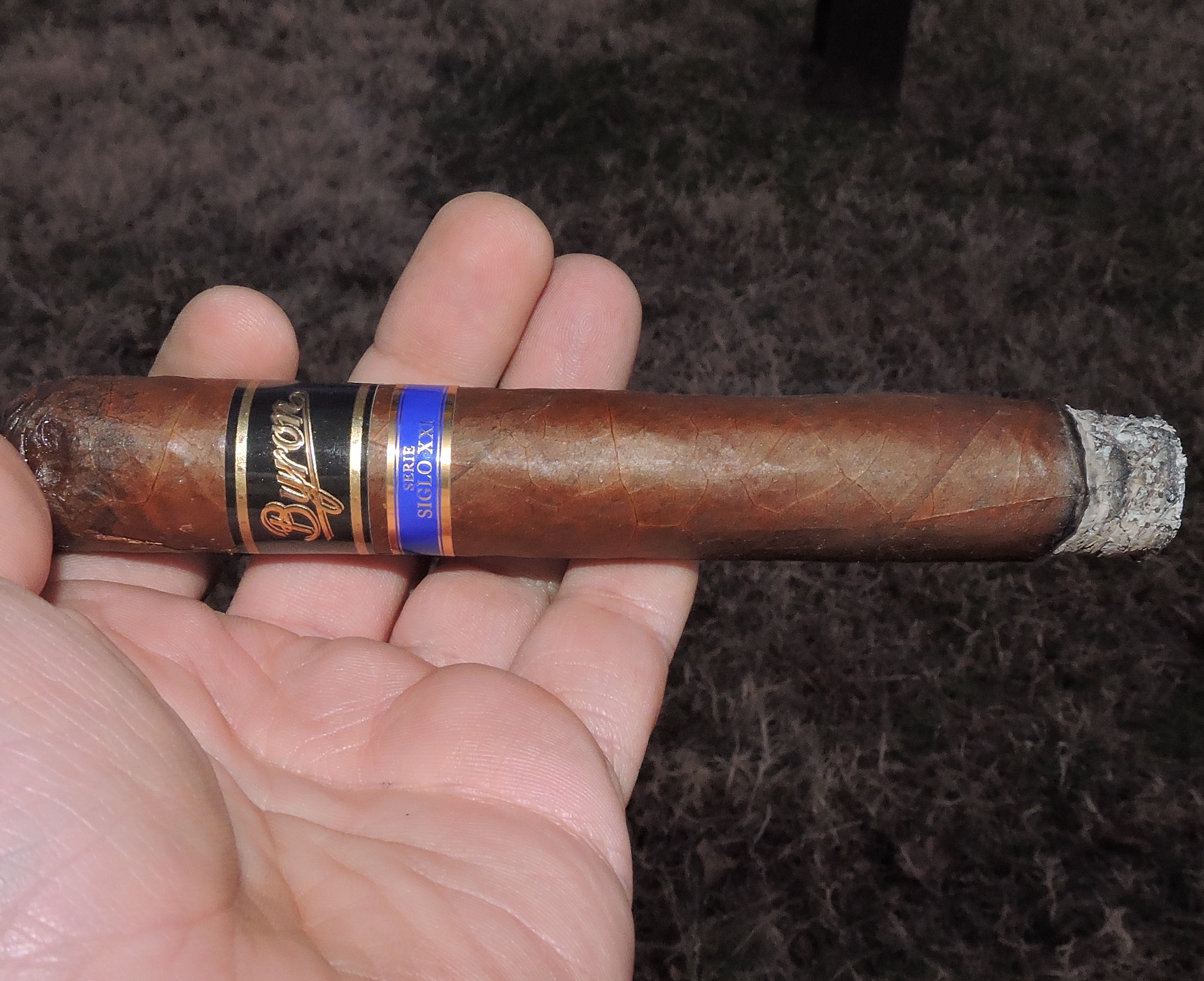 The draw to the Byron Serie Siglo XXI Elegantes had a nice balance between openness and resistance. Overall this was a low maintenance cigar to derive flavor from.

In terms of strength and body, I assessed the Byron Serie Siglo XXI Elegantes to be medium. There was a nominal increase in the intensity level of both attributes, but as the cigar experience came to a close, I still found both attributes to remain in the medium range.

In terms of strength versus body, I found both attributes started out on an even playing field, but toward the second half, I gave a slight edge to the body.

Overall, the Byron Serie Siglo XXI Elegantes is an impressive cigar. It brought the trifecta I look for in a cigar – great flavor, excellent construction, and a nice amount of complexity. I did find this cigar had a longer finish on the tongue that I prefer – particularly there was more lingering sweetness and spice than I prefer, but still, I would say the pluses of this cigar far outweigh the minuses.

This is a cigar I could recommend to any cigar enthusiast.  It’s a cigar I plan to smoke and purchase again. This cigar retails for $33.00, and while it does come in beautiful 25-count humidors, a box purchase is going to run about $850.00 (humidor factored in). While it’s tough to make a recommendation for any cigar for an $800.00+ box purchase, this cigar still is an excellent cigar on merit – and it’s worth picking up multiples to have in the humidor.