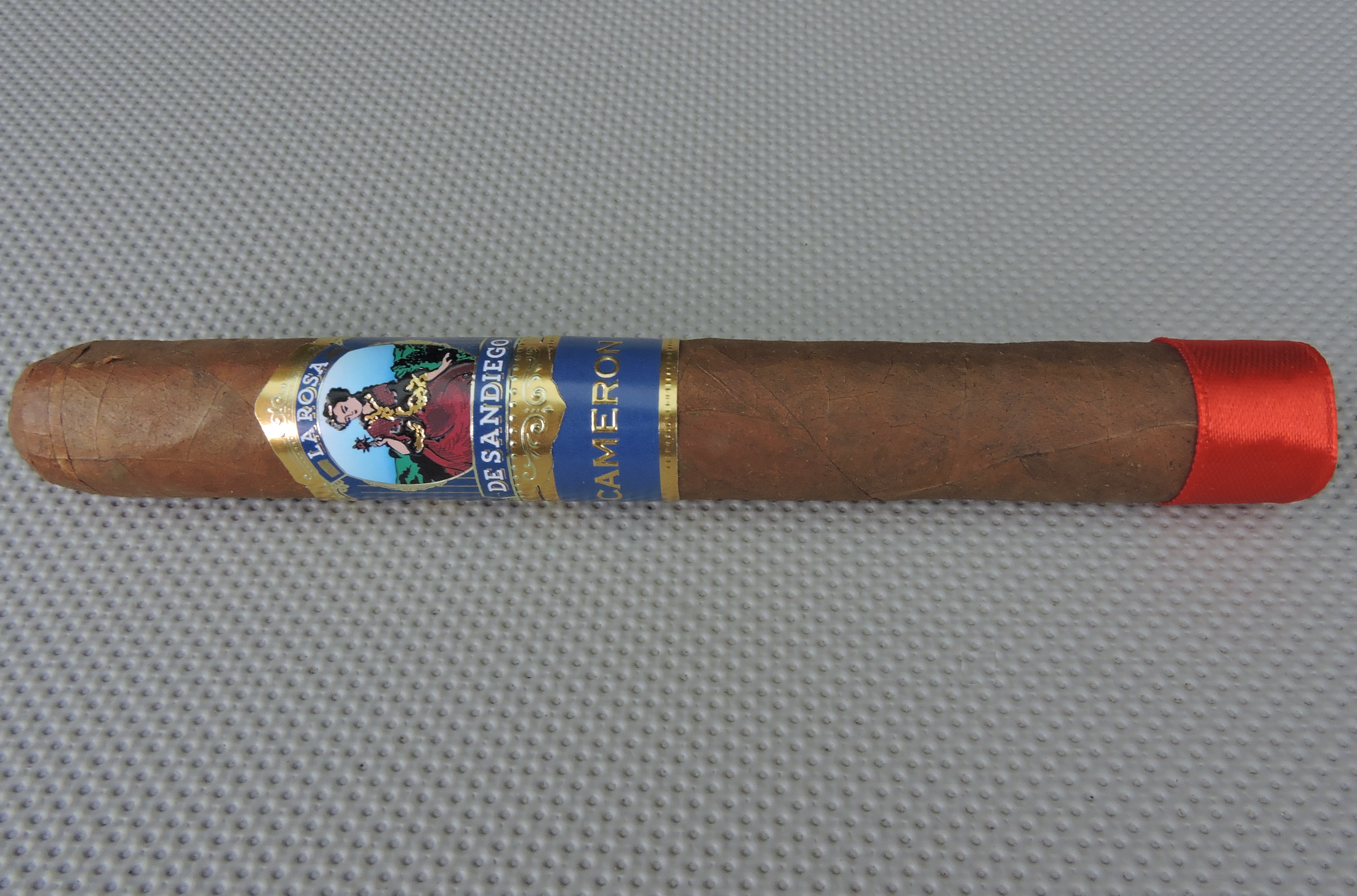 La Rosa de Sandiego derives its name from an area in Cuba called San Diego de Los Banos. This area is located on the western border of the well-known province of Pinar del Rio. The region is famous for its sulfur hot springs, but it also contains soil ideal for tobacco. It was in 1883 that cigar factories began to emerge in the region. With La Rosa de Sandiego, Tapanes set out to create a cigar line steeped in Cuban Tradition.

Without further ado, let’s break down the La Rosa de Sandiego Cameroon and see what this cigar brings to the table.

The La Rosa de Sandiego Cameroon’s wrapper had a medium brown color to it. This wrapper was a shade of brown darker than that found on most Cameroon wrappers. There was a light sheen of oil on the surface. While there were some visible veins and some visible wrapper seams, I still considered this to be a smooth wrapper.

The La Rosa de Santiago Cameroon has two bands. The primary band features a portrait of a woman in a rose-colored dress with a tobacco field in the background. Above the portrait is the text “LA ROSA” in white font. Below the portrait is the text “DE SANDIEGO” – also in gold font. Going around the sides of the band is a blue background with gold pinstripes. There are three medallions on each side of the band. Under the medallions is the text “HECHO A MANO ESTELI, NICARAGUA” in gold font. The remainder of the band has a gold foil-like trim.

The secondary band is also blue with gold trim. On the band is the text “CAMEROON” in gold font. In addition, the footer has a red ribbon around it.

I commenced the cigar experience of the La Rosa de Sandiego Cameroon by placing a straight cut to remove the cap. After the cap was clipped, I moved on to the pre-light draw. The cold draw delivered a mix of wood and what I would term a classic “Cameroon Sweetness” – a natural tobacco with touches of caramel and a slight citrus sweetness. Overall, I considered this to be an excellent pre-light draw. At this point, I was ready to light up the La Rosa de Sandiego Cameroon.

The start of the La Rosa de Sandiego continued with the notes of classic wood and the natural tobacco sweetness from the pre-light draw. The sweetness continued to have slight caramel and a very subtle citrus component. Early on the wood and natural tobacco sweetness became primary notes. Meanwhile, in the background there were some notes of cedar as well as a slight metallic component. The metallic component shouldn’t be construed as a negative – I found it added some balance to the overall flavor scheme. On the retro-hale, I detected an additional layer of cedar.

As the La Rosa de Sandiego reached the middle of the first third, the natural tobacco sweetness took control as the primary note. The classic wood joined the cedar and metallic notes in the background. This profile continued right up until the midway point of the cigar experience.

Just past the halfway point of the La Rosa de Sandiego, the classic wood notes returned to the forefront. Shortly after some earthy notes also surfaced. During the latter part of the second third, there was a decrease in the natural tobacco sweetness while the cedar notes began to increase.

The earth, cedar and classic wood notes were in control during the final third. These notes were still rounded out with some of the natural tobacco sweetness and a slight metallic note. This is the way the La Rosa de Sandiego came to a close. The resulting nub was cool in temperature but slightly soft to the touch.

Burn-wise, the La Rosa de Sandiego scored quite well. The cigar maintained a straight burn path and a straight burn line. This was a cigar that did not require frequent touch-ups. The resulting ash was skewed toward the firmer side. The ash had a mostly light gray color with some darker spots mixed in. The burn rate and burn temperature were both ideal. 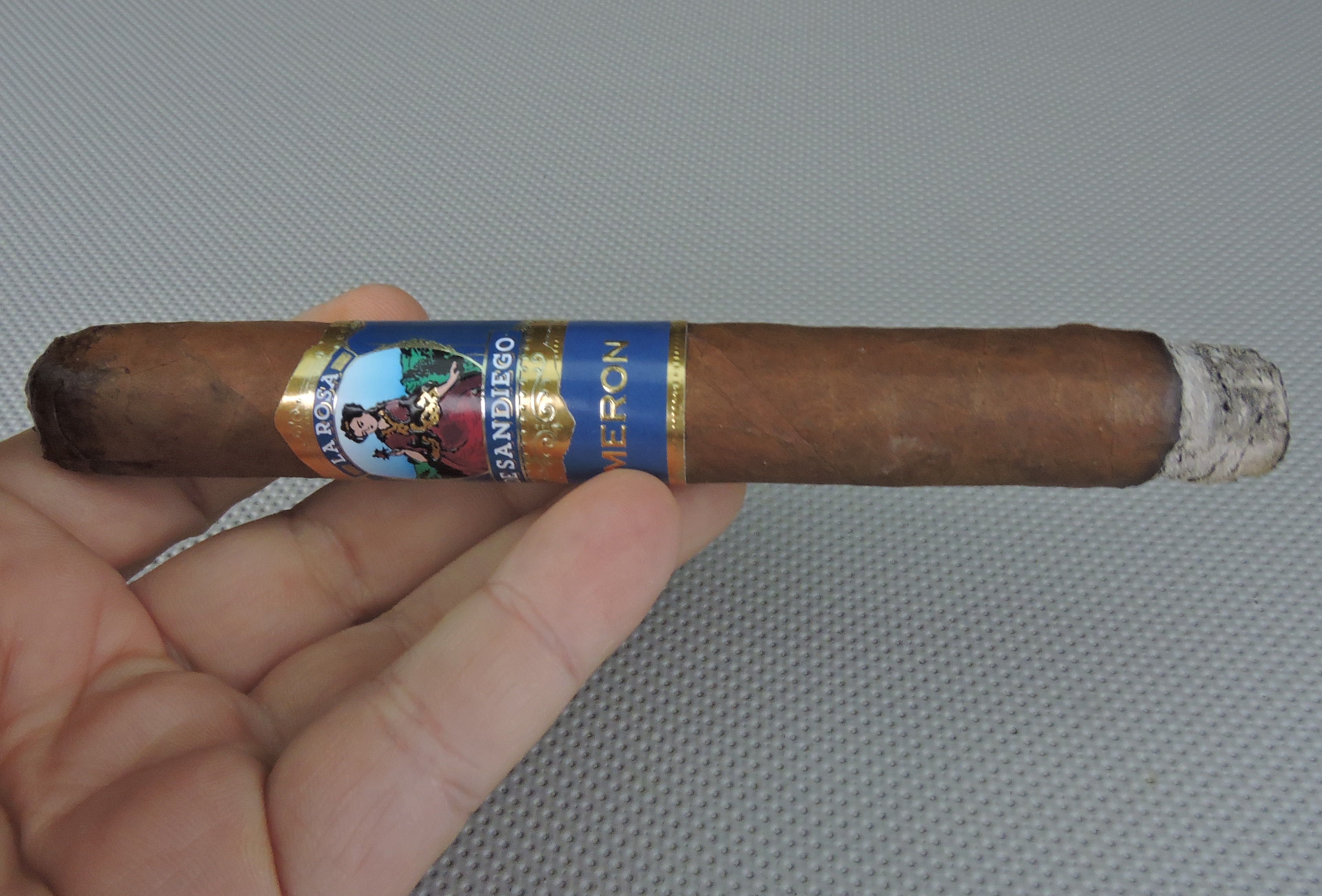 The draw of the La Rosa de Sandiego Cameroon also performed quite well. This was a cigar where the draw had a nice balance of resistance versus openness. Overall, it was a low maintenance cigar to derive flavor from,

It was back in 2015 when I first became familiar with the La Rosa de Sandiego brand and enjoyed the first three offerings by the company. When I got word the company was releasing a Cameroon and Sumatra, I was quite intrigued. With the Cameroon, I can say that this is as good a Cameroon wrapped cigar I have had for quite some time. This blend does a great job of showcasing the nice sweetness a Cameroon wrapper can bring to the table – without overpowering the rest of the blend. This is a cigar I could recommend to any cigar enthusiast and it’s one that can be smoked any time of the day. As for myself, this is a cigar I would smoke again – and it’s one that certainly earns box worthy consideration.