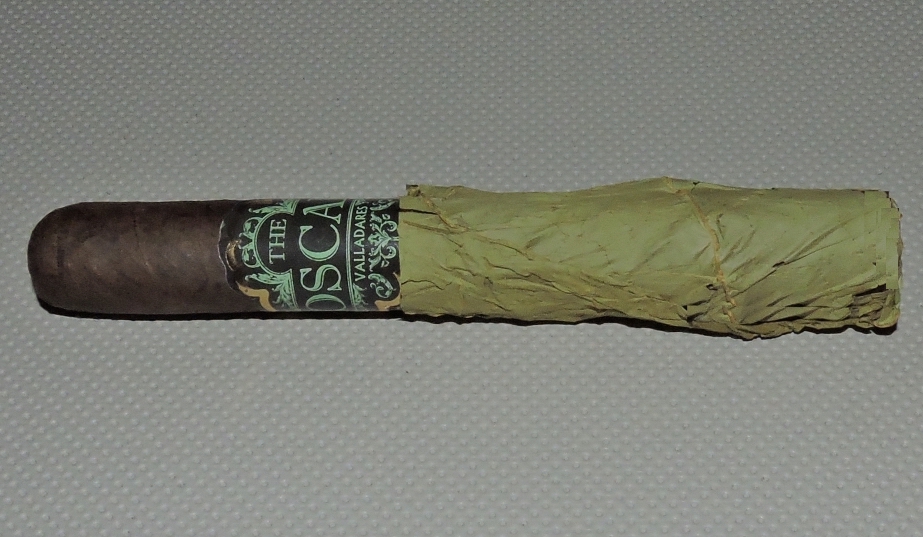 From a creative standpoint, Leaf by Oscar became popular because each cigar in the four blend line was wrapped in a tobacco leaf as opposed to cellophane or tissue paper. For both The Oscar Habano and The Oscar Maduro, Valladares decided to use a candela leaf sleeve and put each individual cigar into it.  Each of the cigars is then packaged in boxes looking like cigar molds. 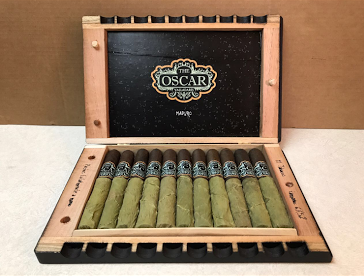 Without further ado, let’s break down The Oscar Maduro Toro and see what this cigar brings to the table.

The Oscar Maduro was worked on by Valladares and his Master Blender Bayron Duarte. The blend uses tobaccos from three countries highlighted by a Mexican San Andres wrapper. The cigar is produced at the company’s factory in Danlí, Honduras.

The Oscar Maduro is available in three sizes. As mentioned, each box looks like a cigar mold and holds 11 cigars.

The Mexican San Andres wrapper of The Oscar Maduro Toro had a dark roasted espresso bean color. There was a light coating of oil on the surface. While the wrapper had a slight sandy texture to it, visually this was a smooth looking wrapper. Any visible veins were on the thin side and the darker color of the wrapper did a nice job at hiding the wrapper seams. 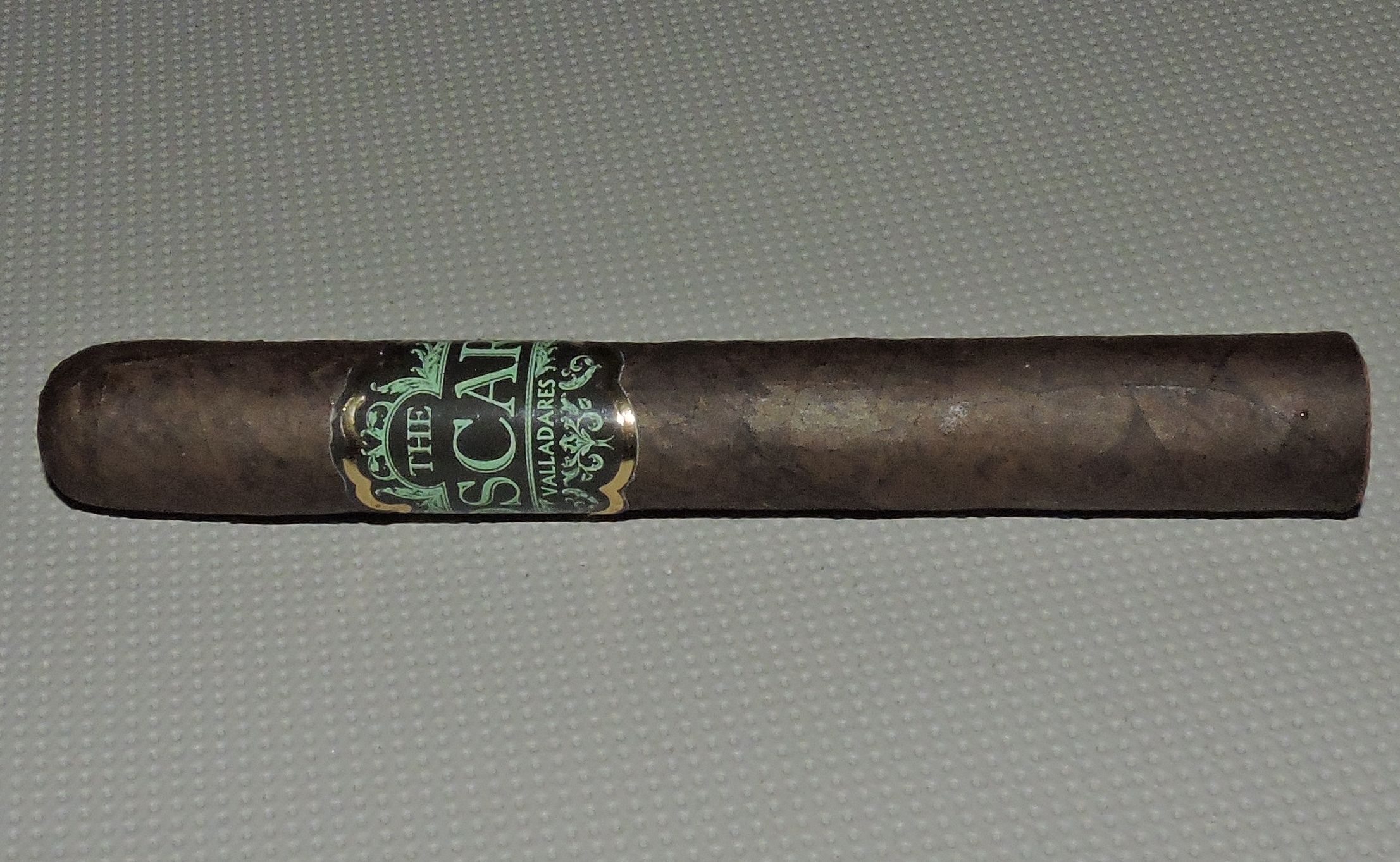 The Oscar Maduro- No Sleeve

The band to The Oscar Maduro is a variation of the one used on the original Oscar Habano. The Oscar Maduro band featured a seafoam on black color scheme (as opposed to the black on seafoam color scheme on the Habana). Prominently displayed on the band is the text “THE OSCAR”. Just below that text is the text “VALLADARES”. On the far right is a small sea foam colored Oscar Valladares logo with black font. The band itself is finished with a metallic-styled gold trim.

The candela sleeve used on the cigar has a rugged look. The candela almost had a near “Kermit the Frog” green color to it. The sleeve comes up to the bottom of the band.  Originally when The Oscar Habano was released the sleeve covered the band as well.

After removing the candela sleeve from The Oscar Maduro Toro, I placed a straight cut into the cap of the cigar and moved right into the pre-light draw. The dry draw delivered notes of espresso, earth, and cedar. There was a subtle sweetness that was tied to the espresso and cedar notes. I judged this to be a satisfactory pre-light draw. At this point, I was ready to light up The Oscar Maduro Toro and see what the smoking experience would have in store.

The Oscar Maduro Toro kicked off with rich mocha notes. Mocha is a compound flavor that I use to describe to be a combination of coffee and chocolate flavor. Early on the mocha notes were prominent in the forefront. There was a nice sweetness coming from the chocolate component of the mocha. In the background, there was a combination of earth, cedar, and a touch of black pepper. Meanwhile, there was an additional layer of cedar and black pepper on the retro-hale.

As the Oscar Maduro moved into the second third, the mocha notes still remain in control, but slowly started to diminish. Concurrently, the cedar and earth notes both increased in intensity. As the mocha notes diminished, the chocolate sweetness moved to the after-draw.  At the same time, there was a subtle cherry note that surfaced in the distant background joining the pepper notes.

By the second half, the earth notes took over as the primary note. The cedar notes were a close secondary note. At the same time, there was still mocha, pepper, and cherry contributing to the flavor profile in the distant background. This is the way the flavor profile of The Oscar Maduro Toro remained until the end of the cigar experience. The resulting nub was firm to the touch and cool in temperature.

In terms of the burn of The Oscar Maduro Toro, I found it to maintain a relatively straight burn path and burn line. There were a couple of times the cigar needed some touch-ups, but I didn’t find the amount needed to be above the norm. The cigar had a tight, light-colored gray ash to it. Meanwhile, the burn rate and burn temperature were both ideal. 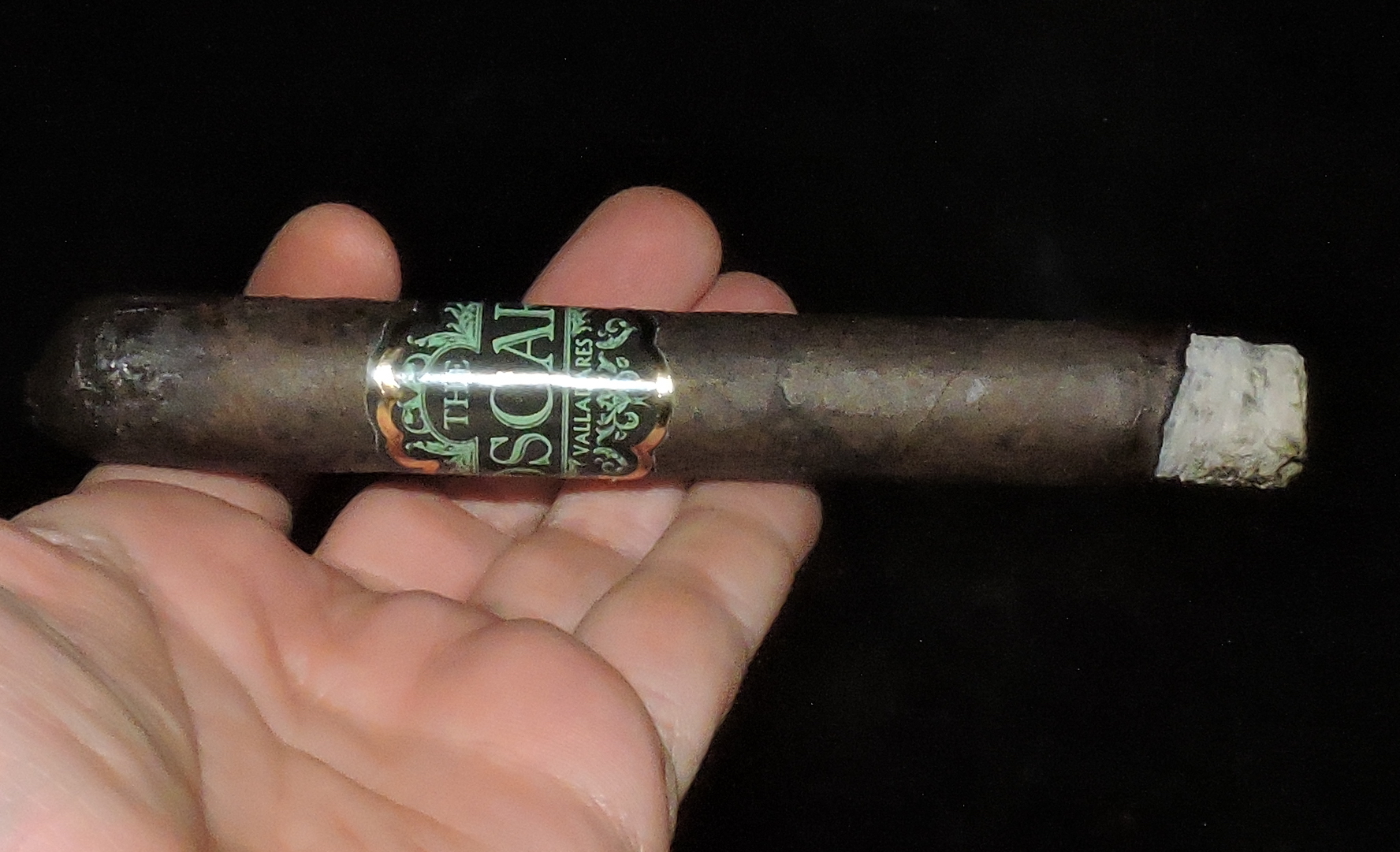 Burn of The Oscar Maduro Toro

The draw to The Oscar Maduro Toro was excellent. It had a touch of resistance to it – which is something that I like. At the same time, even though there was a slight resistance, this cigar also maintained a nice level of smoke production.

I found The Oscar Maduro Toro to fall on the upper end of medium for both strength and body.  If you smoke the Robusto size of The Oscar Maduro, you will find the Toro to be slightly more dialed-back. Throughout the smoking experience, I found there wasn’t much variance in the intensity levels of the strength and body. As for strength versus body, I gave a slight edge to the body.

Overall, I found The Oscar Maduro Toro to be an excellent cigar offering by Oscar Valladares and Company. It’s a cigar that is going to deliver in the most important category – flavor. What I also liked about this cigar was that for a San Andres wrapped cigar, it didn’t have a pungent profile. At the same time, don’t let the dark wrapper fool you, this isn’t a cigar that will overpower you with strength or nicotine (although the Robusto size will offer a little more kick).

The Oscar Maduro Toro is a cigar I could recommend to either a novice or experienced cigar enthusiast. As for myself, this is a cigar I would smoke again. At $12.00 per cigar it’s isn’t an inexpensive cigar, but it’s certainly one of which I would buy multiples to keep in my humidor.