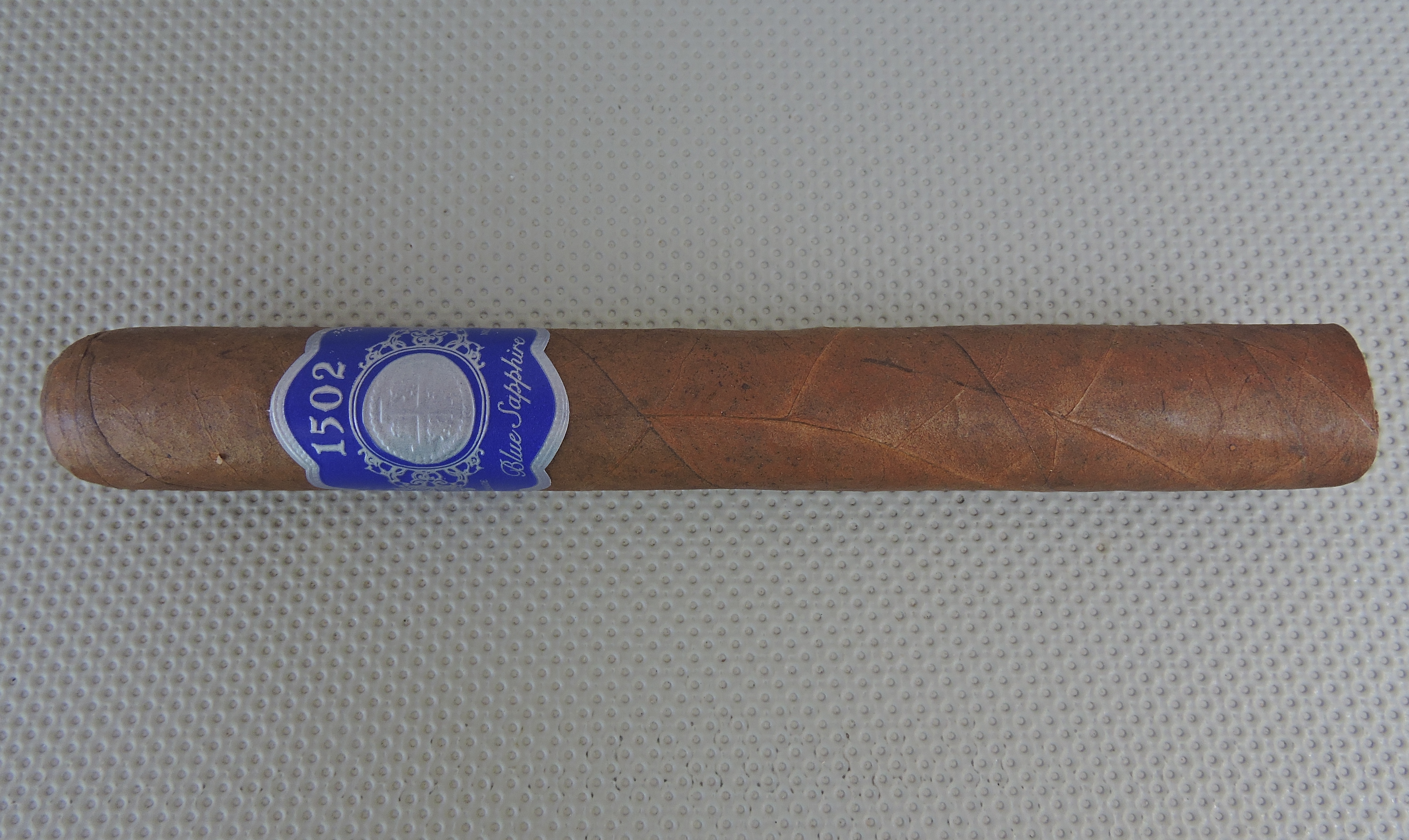 With the 1502 Blue Sapphire, company CEO and founder Enrique Sanchez Icaza has deviated from the formula that has been seen in his other releases. For starters, the 1502 Blue Sapphire Toro Gordo is a rounded parejo – the first rounded parejo he has released. Secondly, the cigar features an open footer. Sanchez had been known to release cigars with his signature “cigar lock” which is a partially covered footer. At the same time, he launches a line that goes back to the roots of the 1502 brand. Sanchez’s first three releases had a precious metal/stone theme with the 1502 Emerald, 1502 Ruby, and 1502 Black Gold. 1502’s next two (the 1502 Nicaragua and the limited production 1502 XO line) went with a different theme. Now with Blue Sapphire, he goes back to the precious metal/stone theme branding this cigar “Blue Sapphire”.

Without further ado, let’s break down the 1502 Blue Sapphire Toro Gordo and see what this cigar brings to the table.

As mentioned the 1502 Blue Sapphire consists of 100% Nicaraguan tobaccos. The cigar is produced at Global Premium Cigars’ longtime manufacturing partner, the Plasencia factory in Estelí, Nicaragua

The 1502 Blue Sapphire is available in one size – a rounded 6 x 52 vitola called a Toro Gordo. The cigar comes packaged in 27-count boxes.  It is unknown whether more vitolas will be released with this blend. 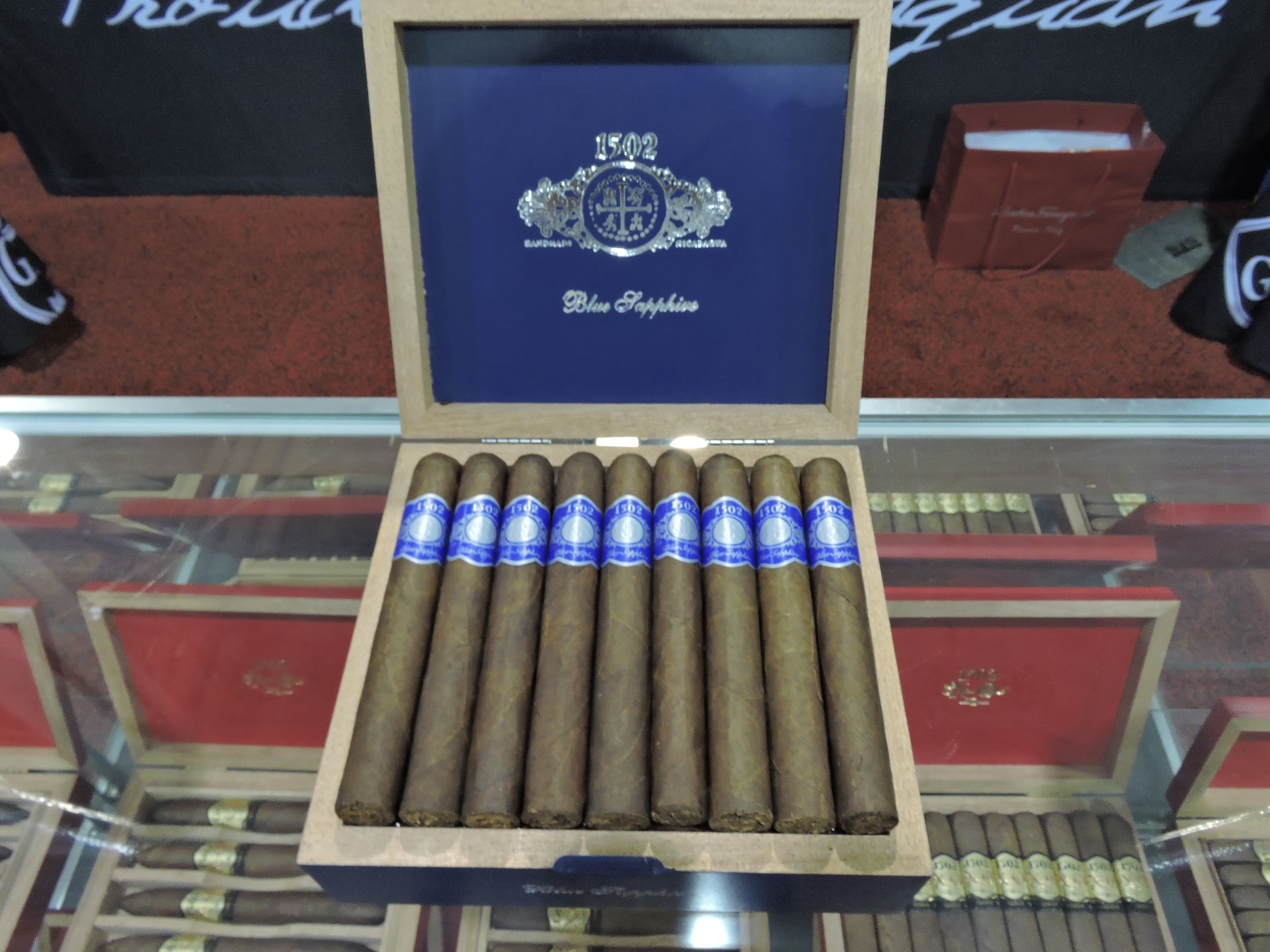 The Nicaraguan wrapper of the 1502 Blue Sapphire had a dark Colorado shade to it. There was some oil on the surface of the wrapper. At the same time, there was a slightly bumpy feel to this wrapper. There were some visible veins as well as some thin wrapper seams that were visible.

Later in the first third, some black pepper notes surfaced on the tongue. The black pepper along with some bready notes joined the baker’s spice and mineral in the background. As the 1502 Blue Sapphire Toro Gordo continued into the second third, the natural tobacco and cedar continued to be in the forefront and alternate in intensity. During this stage of the smoking experience, the mineral notes diminished and by the end of the second third, they had dissipated. Simultaneously there was an increase in the black pepper notes.

The last third saw the cedar and natural tobacco remain the primary notes, but by this stage the cedar had a slight edge. The increase in black pepper leveled off. I also still detected some baker’s spice and bread notes in the background. This is the way the smoking experience of the 1502 Blue Sapphire Toro Gordo came to a close. The resulting nub was cool in temperature and soft to the touch.

From a burn standpoint, the 1502 Blue Sapphire Toro Gordo did maintain a straight burn path. The burn line itself was slighty wavy. This was a cigar that needed some touch-ups to keep it on track, but I didn’t find the amount of touch-ups to be excessive. The resulting ash was charcoal gray in color. This wasn’t an overly firm ash, but it wasn’t a loose or flaky ash either. The burn temperature was ideal.  As for the burn rate, it was a little slower. Two of the samples burned closer to the two-hour mark. This didn’t seem to have any adverse effects on the smoking experience – other than if you were pressed for time to smoke this cigar. 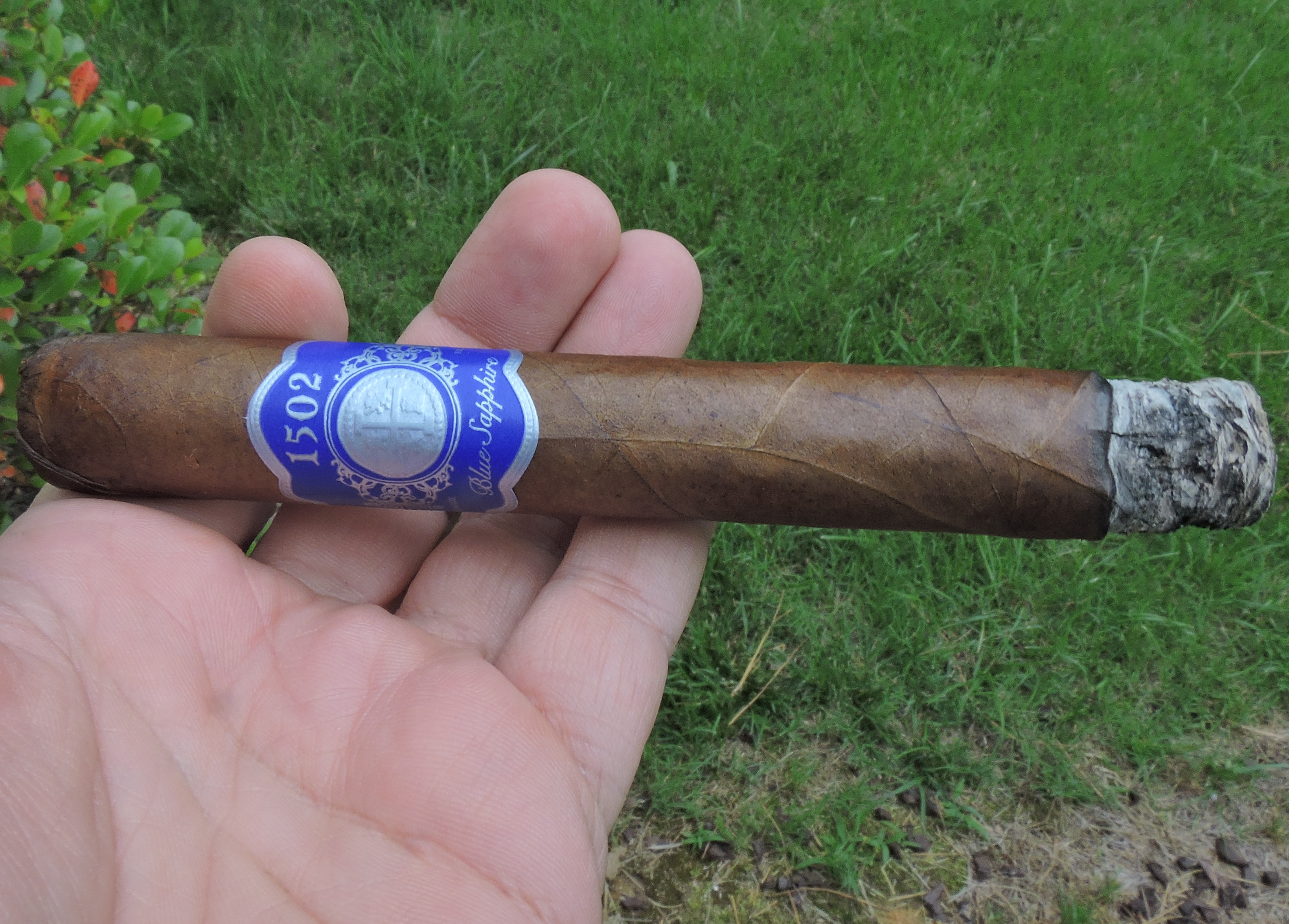 As for the draw of the 1502 Blue Sapphire Toro Gordo, it was a little more open than I prefer. Surprisingly despite the fact this draw was open, the cigar still had a slower burn rate.

When it comes to strength, the 1502 Blue Sapphire Toro Gordo is one that builds up in intensity. This is a cigar that stated out medium strength. During the first third, the strength increased somewhat linearly. By the second third, the strength level was in the medium to full range. Shortly before the midway point, there was a stronger spike in strength and by the midway point the 1502 Blue Sapphire Toro Gordo had hit full strength.  As the Blue Sapphire moved through the second half, the increase in strength slowed down.

In terms of strength versus body both attributes started out even. By the second third, the strength took the edge and maintained the edge for the remainder of the smoking experience.

The 1502 Blue Sapphire Toro Gordo is quite successful at delivering a goal of being the boldest 1502 to date. There certainly is enough strength and body to help this cigar achieve the goal. While for a good portion of the smoking experience, the strength has an edge over the body, the flavors of this cigar did satisfy me. This blend did intrigue me – and it made me wonder what it would be like in either a Corona or Conquistador (1502’s 6 x 56 size) size. I’d also like to see what this cigar would be like in the classic 1502 box-pressed format.

Because this is a bolder smoke, it’s one I’d recommend to a more experienced cigar enthusiast. As for myself, even though it’s a pricier cigar,  it’s one I would purchase and smoke it again.