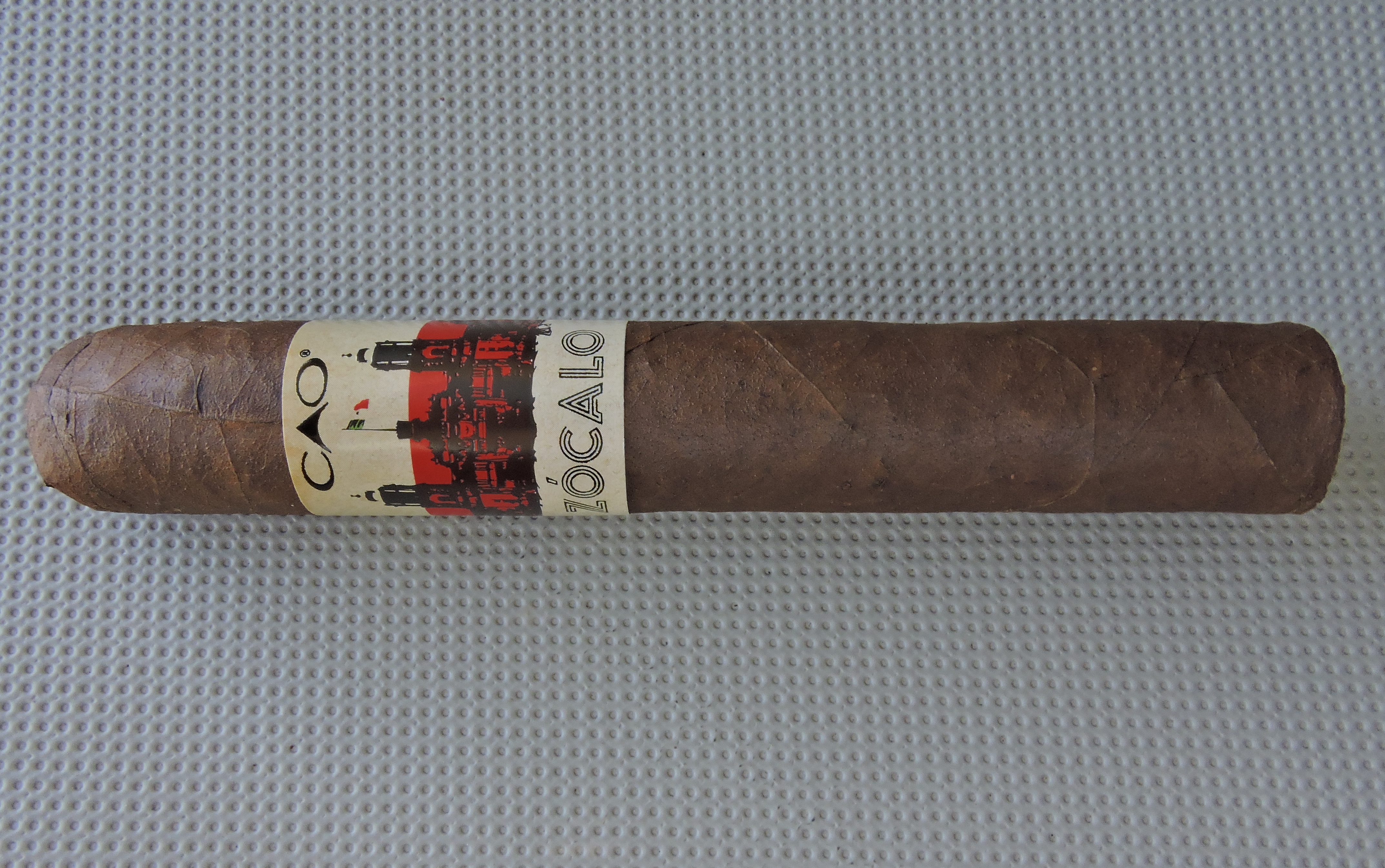 The CAO Zócalo is a limited edition cigar that was introduced by General Cigar Company earlier this year. It’s a cigar that falls under CAO’s World Collection, a group of cigars under the CAO brand that showcase different cigar tobaccos around the world. The World Collection is known for the use of rare Brazilian tobaccos (Amazon Trilogy), Italian (CAO Italia), and Colombian (CAO Colombia). It also includes many classic tobaccos such as Brazilian Arapiraca (CAO Brazilia) and U.S. Connecticut-grown (CAO America). One staple tobacco that had not been included is the use of the popular San Andres Mexican leaf. That changed when earlier this year CAO unveiled the CAO Zócalo, which utilizes San Andres for the wrapper. Today, we take a closer look at this cigar.

While the cigar is the first CAO cigar to use Mexican tobacco, the Zócalo has another distinction. It was one of the first major releases to ship using the new FDA’s warning labels as required by the deeming regulations.

Without further ado, let’s break down the CAO Zócalo and see what this cigar brings to the table.

CAO Zócalo is a three-country multi-national blend. The wrapper is described by General as a special Morron wrapper grown in the San Andres valley in Mexico. The blend also utilizes a Cameroon binder and a filler of Nicaraguan tobaccos. The cigar itself is produced in Nicaragua at General’s STG Estelí factory in Estelí. 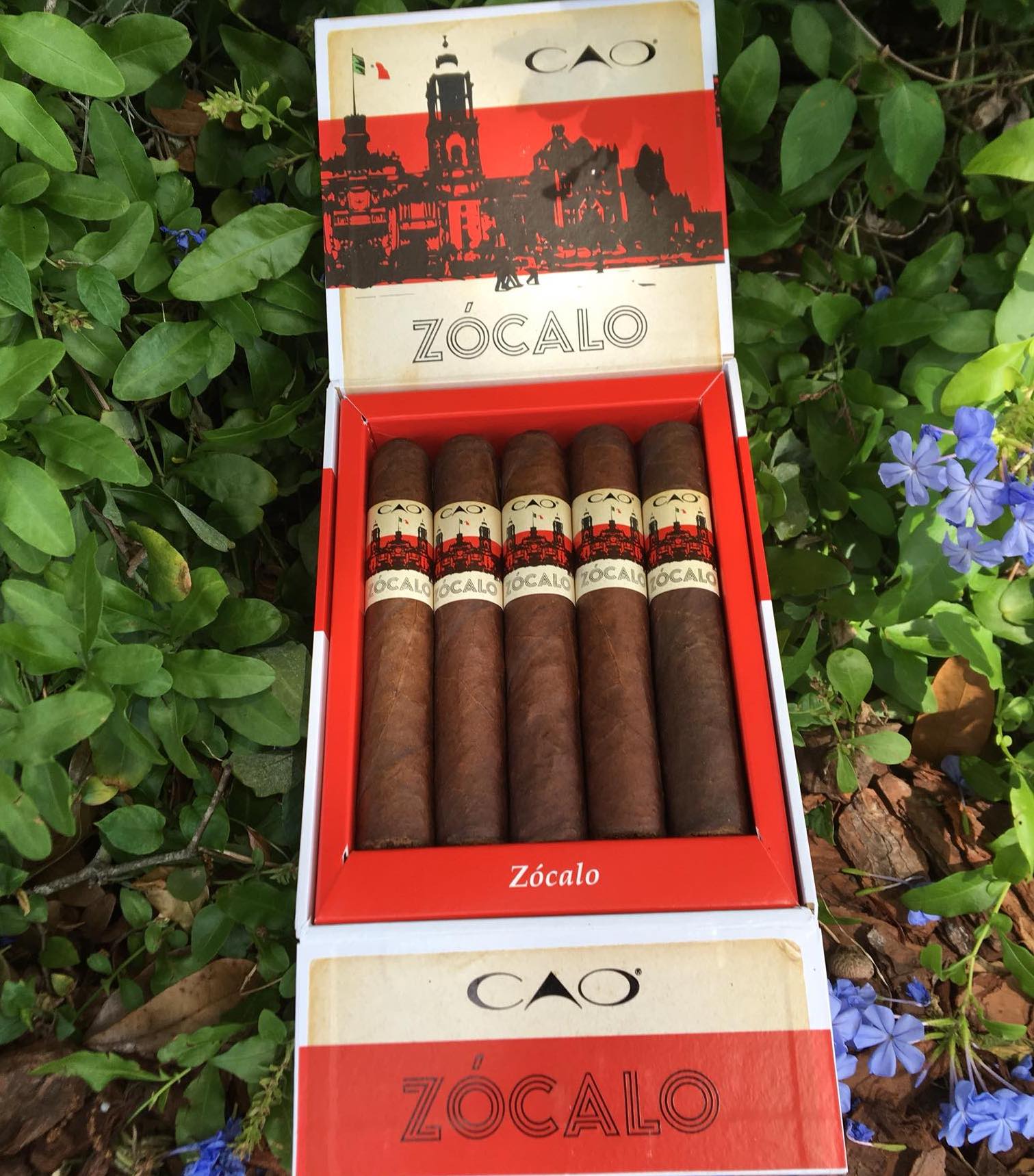 The San Andres Marron wrapper of the CAO Zócalo has a rich milk chocolate color to it. This wrapper had a slightly rough feel when touched, but it also had a fair amount of oil. The surface of the wrapper was slightly bumpy. There were some thin visible veins while the dark color of the wrapper did a good job at hiding any visible wrapper seams. 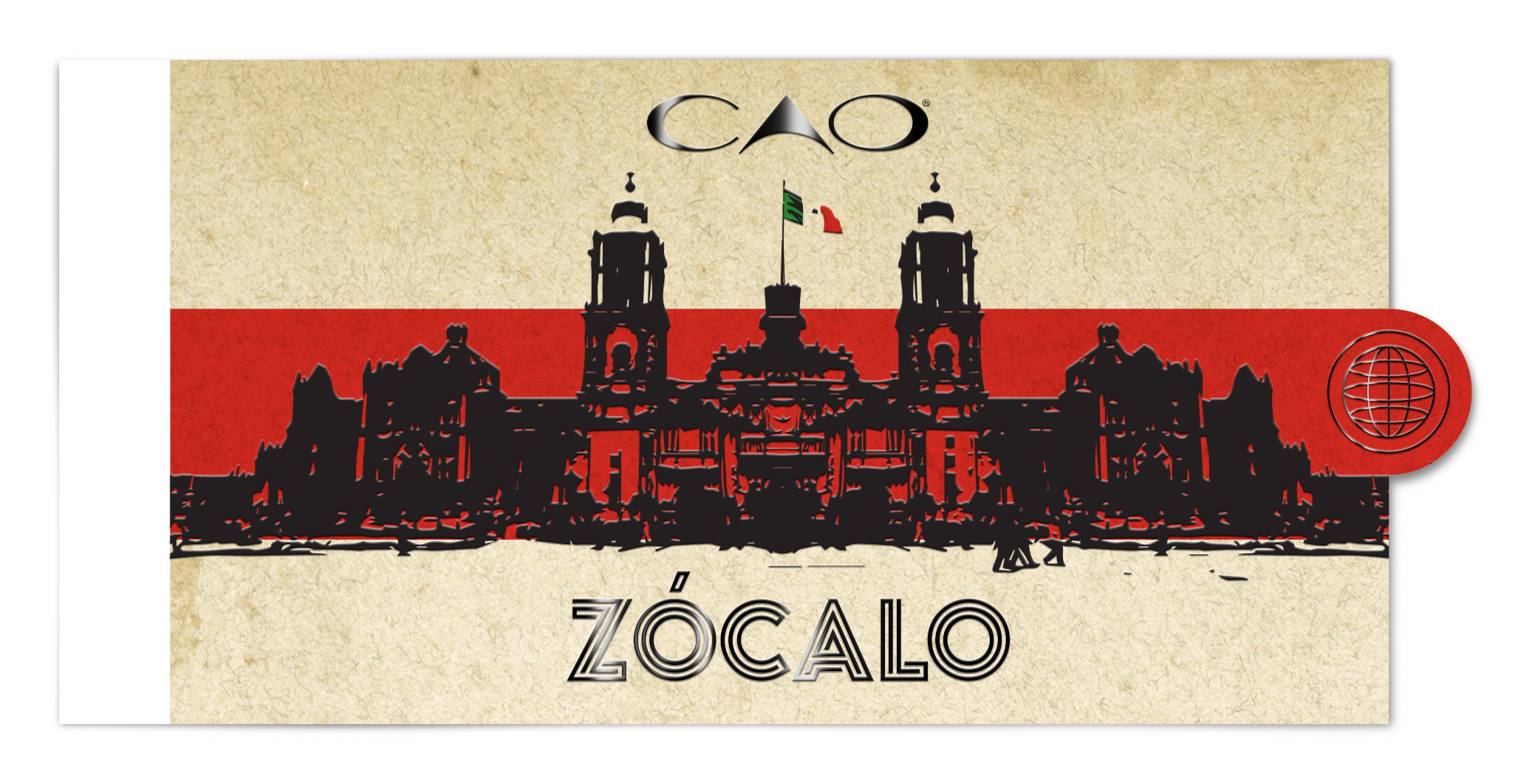 After placing a straight cut to remove the cap of the CAO Zócalo, I commenced with the pre-light draw phase. The cold draw delivered some sweet blackberry notes along with some notes of cedar and classic wood. The sweetness alone from the cold draw was enough to make this an excellent pre-light draw in my book. At this point, I was ready to light up the CAO Zócalo and await what the smoking phase would have in store.

The start to the CAO Zócalo delivered a mix of earth, white pepper, and blackberry notes. The first few puffs had both some harshness and sourness to it, but that would soon change quickly. The blackberry notes developed a nice sweetness and moved to the forefront. The white pepper and earth notes settled in the background. This was soon joined by notes of grain and chocolate. On the retro-hale, there was an additional layer of pepper along with some cedar.

Later in the first third there was an increase in the both the pepper and the earth notes. During this part, the pepper also became more prominent on the retro-hale. As the CAO Zócalo moved through the second half, the earth notes started to float into the forefront more and more. Meanwhile, the pepper notes still remained in the background. There were also notes of grain and chocolate still providing complementary flavors in the background.

By the midway point of the CAO Zócalo, the earth notes took over as the primary note. These earth notes remained grounded in the forefront for the remainder of the smoking experience. The pepper notes started to level off in terms of increasing in intensity by the final third. Meanwhile, the blackberry notes settled into the background, There still were some occasional notes and by this point, the grain notes had dissipated. This is the way the CAO Zócalo came to a close. The resulting nub was firm to the touch and cool in temperature.

Overall the burn of the CAO Zócalo performed very well. The cigar had no trouble maintaining a straight burn path. The burn line had some occasional jaggedness to it, but this was more asthetic in nature and was easily remedied with some touch-ups. This was a cigar that didn’t require an excessive amount of touch-ups. As for the ash, it had a charcoal gray color and was skewed toward the firm side. Meanwhile, the burn rate and burn temperature were both ideal. 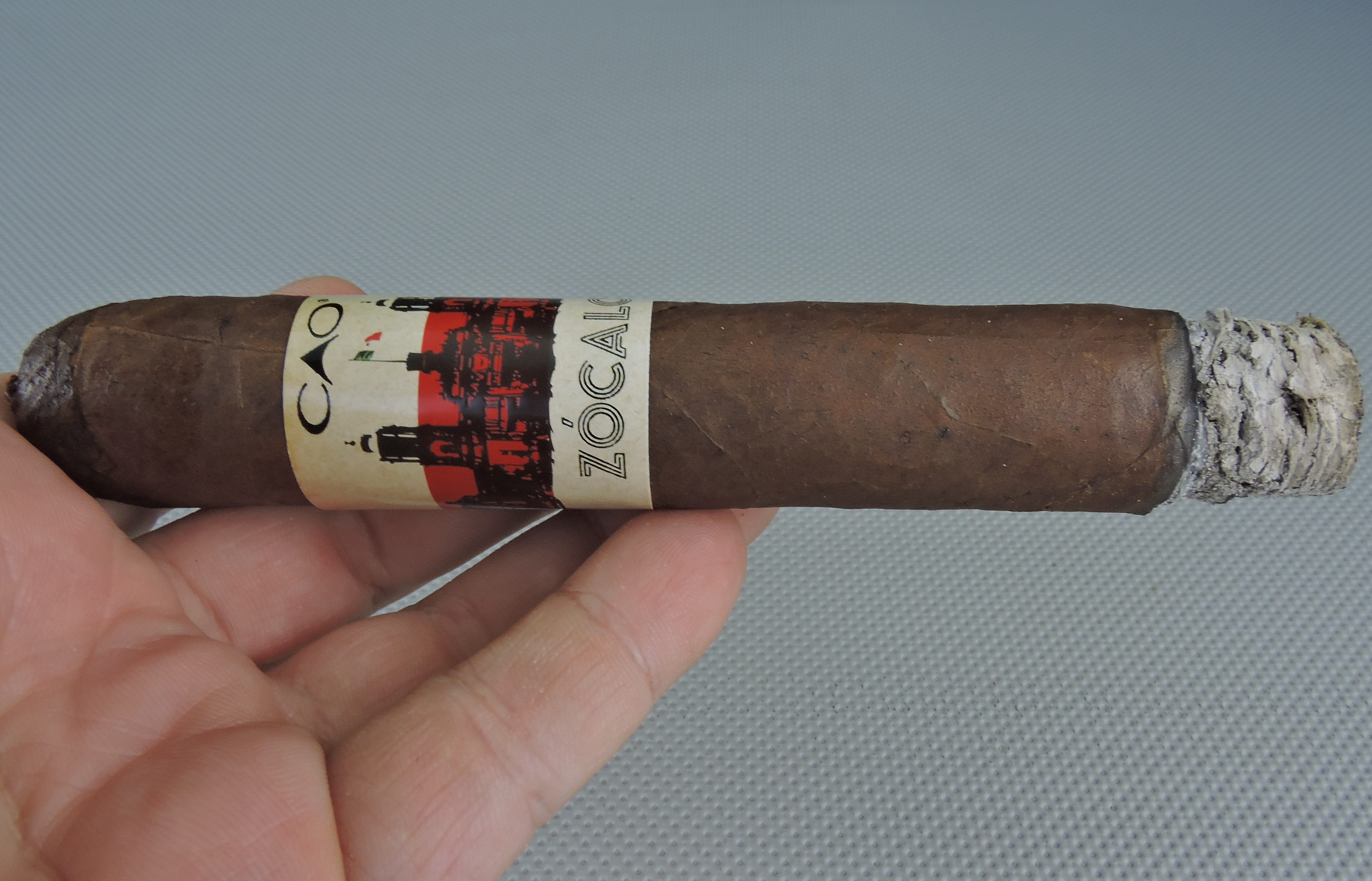 Burn of the CAO Zócalo

The draw to the CAO Zócalo had a touch of resistance to it. Some might not prefer a draw like this, but on a large ring gauge cigar like the Zócalo, it is preferable in my book. It wasn’t difficult to derive flavor from the cigar. Despite the slight resistance, it produced an ample amount of smoke.

If you like a cigar that is going to build up in intensity, the CAO Zócalo is a good choice for you. The strength started out on the upper end of mild to medium. The strength builds up linearly, yet at the same time I found it still sneaks up on you. By the second third the strength is medium and as the cigar moved into the final third, the strength level was now at medium to full.

The body of the CAO Zócalo started out medium. This attribute also increased linearly in intensity, but at a slower rate than the strength. By the last third, the CAO Zócalo delivered medium to full-bodied flavors.

In terms of strength versus body, the CAO Zócalo is a cigar where the body had the edge during the first half. By the midway point, both attributes are on an even playing field. Once the cigar entered the final third, I found the strength had the edge.

In terms of overall satisfaction in my book, the CAO Zócalo succeeds in delivering a blend where the San Andres wrapper does not overpower the rest of the blend. Over the past few years, Master Blender Rick Rodriguez has done a good job in restoring CAO’s reputation of delivering creative and innovative blends. The CAO Zócalo is no exception. From a flavor standpoint, this is not a cookie cutter San Andres wrapped cigar. I also really liked the way this cigar built up in intensity.  While I’m not sure it will win over anyone who doesn’t like a 60 ring gauge cigar, I can say I think the 60 ring gauge format worked quite well with this blend.

The CAO Zócalo is a cigar I would recommend to a more seasoned cigar enthusiast, but I wouldn’t discourage a novice from trying it. As for myself, it’s a cigar I would smoke again – and it’s one definitely I’d give box worthy consideration to.